astrologychick (45)in #bitcoin • 3 years ago

When it comes to Bitcoin, I have some skin in the game, so I follow this a little bit obsessively. And yesterday, June 5th in the AM (PST) when I checked the price of Bitcoin it was just over $2,500 up from the $2,400's the previous day. When I came home and checked it 6 hours later it was over $2,800 where it has remained overnight, as of this posting. 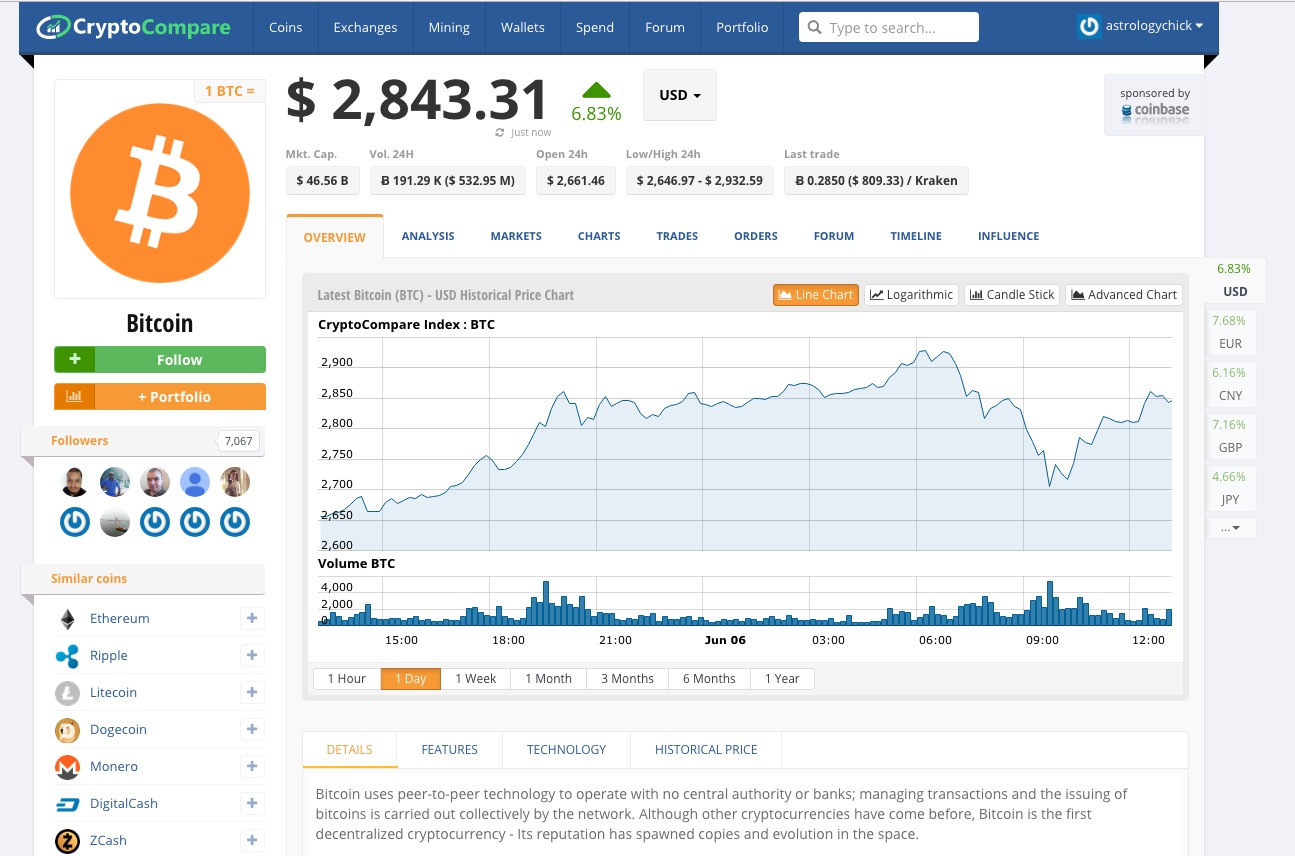 This time it seems a near certainty that it will remain at and above this level. Partially because this has been a steady regrowth (despite the $300 upswing) of the jump up it made 2 weeks ago. The previous jump was a cliff jump, which is why it had to fall back.

But after a short time in this world (since late 2016) I have gotten a feel for these moves. Of course, my disclaimer is that nothing I say here can be constituted as financial advice and all readers must do their own due diligence and consult with their own financial experts. Anyway, despite not being anything close to a financial advisor, and probably someone that would be laughed at by many for having an opinion on this subject, here are few reasons not to laugh me off so fast.

In a previous post I discussed the Retrograde of Venus and why it was significant. This retrograde cycle ended Mid-May which means that issues (good and bad) related to finance can now progress forward after a period of review and reworking. Anyone who NOW bases their actions on actual numbers and facts stands to make progress (and profits) from Mid-May onward. This is playing out in the Cryptoverse. But also big financial institutions around the world are failing. This will continue to happen over the summer and into the Fall of this year, with aftermath - aftershock - events happening for at least another year after that. The timing of this is due to the...

TOTAL SOLAR ECLIPSE across the whole US

This is a massive Astrological event that hasn't happened in over 100 years. This is the single BIGGEST event that any of us will see during our lifetimes. It is HUGE. I will be posting a video on the subject in the next few days. We are already into the umbrella of this event predictor.

As I am writing this, I just got a text from my brother stating "$3,000 Bitcoin." Although to be fair, Cryptocompare still has it hovering just below the $2,900 mark. These prices depend on where you look and Crytptocompare.com uses an average of the many exchange prices so BC has surely topped $3k sometime yesterday on some exchanges and probably far above that in China.

So here is my prediction - it will keep going up, it will go up fast and it will go up furiously with stops and bumps along the way due to systemic over capacity issues within the exchanges and portals for buying into Bitcoin. Not because of problems with Bitcoin. We will see Bitcoin at $4,000 by the end of the month, maybe within two weeks. It could also make a drop of $500-$700 on it's way up. This - as anyone who has watched Bitcoin for a while will know - is just what Bitcoin does. And then it goes up again. If you want to try to play those big moves, I say good luck. Some will make fortunes - some will lose them. I am not that brave.

Speaking of problems with Bitcoin, once those hard fork, soft fork issues are resolved (probably near the end of June) then Bitcoin will see LARGE INSTITUTIONAL investors pouring in and it will go up (again). They will not want to wait any longer. They who are in the know are completely freaked out about our economy and their loss of control over the masses.

This is an exciting time to be alive. Especially if you are prepared.

Very interesting analysis. I have been considering applying Astrology to the crypto market (but that would first involve actually learning some astrology)

Would you consider doing a space weather overview for Steem, maybe once a week? I know I would be interested in reading it, and I doubt I am the only one.

Thanks for your thoughts. Learning Astrology isn't that easy actually! I started when I was nine and even learned how to do all that math to cast a chart. An overview of Steem sounds really interesting, are you suggesting an Astrology column that focuses on Steem somehow? I am not sure what you mean by weather?

Also, using Astrology for investing is very tricky and also hugely personalized. Each person's chart reacts differently to what is going on, even though there are some large trends that are good for everyone in general. I was actually planning to do an Astro Analysis of Bitcoin as a new form of money. I could analyze Steemit as a new social platform based on it's birthday as well. Bitcoin is really interesting though because it not only created a new form of money, but a new form of online market exchange as well. Another one I'd want to look at is Etherium of course.

These are fascinating times for all of us!

I was thinking of a weekly astrology post about how astrology affects steem it. I have heard the term space weather used to indicate the general influence of astrological forces at a point in time... For some reason I thought it was a more common meataphor

Nice blog. I was about to start a similair discussion. The cryptospace definitely feels a bit inflated. However we also said that about the S&P 500 40 years ago Does anyone know about: https://www.coincheckup.com They seem to give this complete indepth analysis of all cryptocoins. Sorted by team, product, company, advisors, previous investors, etc. Go to: https://www.coincheckup.com/coins/Bitcoin#analysis To see the: Bitcoin Detailed analysis