A Sea Slug That Uses Photosynthesis (Much Like A Plant)

While photosynthesis is usually not associated with the animal kingdom, there are a few animals out there who can produce food for themselves by harnessing the power of sunlight directly. While for some of those animals photosynthesis might be just a small portion of their diet, there are a few unique animals that use the sun as their main energy source for the majority of their life.

It's time to meet one of them - the special little green sea slug known as the eastern emerald elysia or elysia chlorotica. And yes, this little fella looks like a leaf and what you see above is not a drawing, it's a photograph! To me it even looks kind of surreal.

The eastern emerald elysia is a species of green sea slug that belongs to the clade Sacoglossa (or sap-sucking sea slugs) and can be found along the east coast of North America going as far south as Texas and Florida and as far north as Nova Scotia. It lives in shallow waters near the coast often in tidal pools, salt marshes and tidal marshes. But those are not the details that make it really interesting. It has the awesome power of photosynthesis and is a true autotroph - a creature that synthesizes its own food.

The source of this superpower

The emerald elysia is not born with the ability to photosynthesize on its own, so it begins its journey in a very similar way to all the other animals out there - it starts off by simply consuming food. But it turns out this mundane activity is actually at the core of its superpower. When the juvenile slugs are born, they are brown with some tiny red dots, but as soon as they start feeding they turn green. What they consume is a specific type of algae (vaucheria litorea) but obtaining nutrients is not their main goal. What they care about is piercing the algae and sucking out the cytoplasm they contain for the plastids it contains. Those are the organelles full of chloroplasts where photosynthesis happens. The emerald elysia then uses these plastids to line its highly-specialized digestive system so it can put them to practice photosynthesizing its own food by just basking in the sun. The biological process of aquiring another species plastids to use as your own is called kleptoplasty. 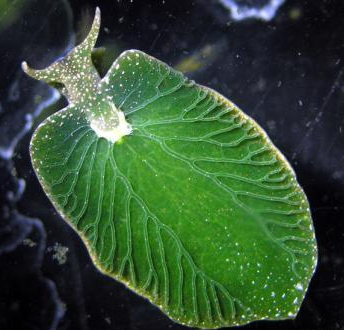 This is expectedly the main reason the slug is shaped like a leaf - this shape allows it to expose its digestive system to as much sunlight as possible so the chloroplasts that line it can harness light and turn it into food full of energy the animal can survive on. The veins you can see on its back that make it resemble a tree leaf even more are actually part of its digestive system. Just a few weeks of feeding per year allows the animal to survive on photosynthesis almost exclusively.

That's amazing, but why aren't more animals doing it? There are so many herbivores out there, is it so difficult to evolve some transparency so sunlight can reach your digestive tract and start having the plants you've already eaten doing the hard work for you while all you do is sunbathe? I have a friend who is so pale he's basically transparent and he survives mainly on greenery - if I manage to convince him to leave the house and expose himself to some sun, why wouldn't he be able to evolve into a photosynthetic autotroph?

Well, it turns out it's not that easy to get the chloroplasts to function on their own. They might have their own DNA, but it encodes only for about 10% of the machinery needed for photosynthesis to occur and be sustainable. When plastids are surrounded by the alea's cytoplasm, the algae cell nucleus provides the blueprint for 90% of the proteins and enzymes that enable the process of photosynthesis to work. The thing is, animals don't usually possess the genes required to facilitate all of this. So how can the emerald elysia pull that off then?

This slug is not just a chloroplast thief, it's also a GENE THIEF!

It seems that acquiring the algae's chloroplasts through keptoplasty wasn't enough for this sea slug's ancestors, so they also stole all the genes needed to support photosynthesis from the vaucheria litorea algae too! Unlike the way things work with the plastids where every generation of slugs needs to steal them all over again, the rest of the required genes have actually became part of the animal's genome and parents are passing them to their offsping directly. It's not yet clear how exactly this gene theft (or horizontal gene transfer) occurred, but what's clear is that it provided the animal with a huge advantage. Borrowing both chloroplasts and the required machinery for them to function properly from its food meant it could start making its own food relying just on sunlight. The slug's digestive system consists of densely packed tubules that branch all throughout its body as you can see in the closeup on the right (with the arrow pointing at a clearly visible example). The tubules are made up of both animal cells and algal plastids, containing chloroplasts. Each tubule contains a thin layer of animal cells containing animal organelles and an abundance of algal plastids. Without those chloroplast-filled plastids, the slug would be brownish or light gray, but this structure of tubules allow it to pack so much chlorophyll that it gives it its distinct color.

But this would not be possible without horizontal gene transfer having happened in the past lineage of the sea slug. One of the genes that the emerald elysia has acquired from vaucheria litorea called psb0 is vital for photosynthesis regulation and for keeping the chloroplasts alive for extended periods of time. This allows the sea slug to be much more efficient in its photosynthesis and to use the same plastids for longer. While there are other animals that can ingest algae or plant cells and use them for photosynthesis, we rarely see such direct integration of plastids and true endosymbiosis enabled to kleptoplasty and horizontal gene transfer. 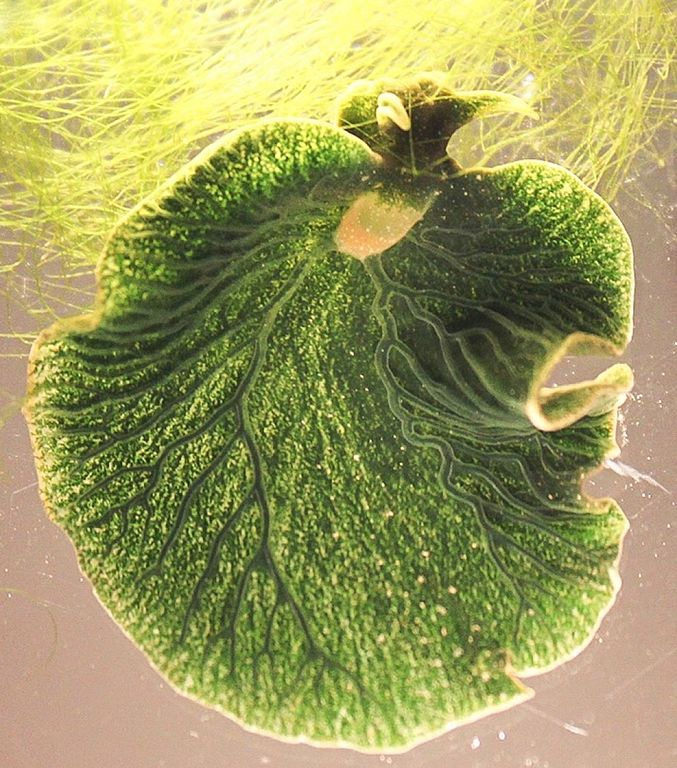 Source
Thank you for reading! :)

A totally new thing for me. Thanks.

Now this is cool. Makes me miss discovery channel and National Geographic. I have no idea why but "kleptoplasty" seems to crack me up. Sounds like some dude that can't help but steal everything in sight

Well, that's not surprising keeping in mind that the "klepto" part means stealing just like it does in kleptomania which seems that you're associating it with.

I'm always attracted towards creatures that prepare their own food instead of being dependent on another creature for food. That's a nice article about slug. I never thought about photosynthesis beyond plant. This article makes me think in a different perspective. Thank you.

Interestingly enough, while preparing its own food, this creature has to steal the ability to do so from another creatures. I'm very glad this article opened your mind to something new! :)

An amazing creature and I am resteeming, as it could perfectly fit in my Amazing Creatures of the Deep Series :)

Thank you so much! :) It's a bit of an amazing creature of the shallow, but let's not dive too deeply into that :P (if you'd pardon the puns)

this is amazing. I thought only plants could use photosynthesis to survive. this definitely wasn't in the biology I was taught. How in the world did you come across this?

Attimes the way i see some wonderful creature i get marvelled, there is even one plant that feed on insect, i keep on wondering how the whole process goes.

Man, that thing is awesome! Thanks for a great read!

P.S.: Something you might want to keep in mind, upvoting something that is older than 7 days on this platform is just a waste of our voting power as it will not result in any additional rewards. Every post gets its rewards at 7 days and none of the votes that come after the rewards has been paid out can affect them.

Oh, thanks for the tip!