Does Bernie Sanders Have The Ticker?

markhodge (54)in #berniesanders • 2 years ago 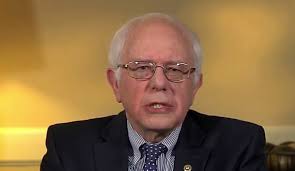 While the Democratic Party continues to pin its hopes and its future on the increasingly obvious fiction of Trump-Russia collusion, the mask that fakes consequential difference between the two major parties in the United States continues to slip. Behind it is a rat's nest of self-interest, corruption and entitlement that is breathtaking.

Sure, the DNC's brand is “more liberal” but in all practical aspects, its members have their noses well and truly buried in the slush pit that a cabal of moneyed interests offers elected officials of any hue. In fact, the DNC's hypocrisy seems set to condemn them to years in the wilderness unless substantial change is made. Much and all as “liberals” hate to be told, the Republican party under Trump appear less conflicted and more focused. Where the DNC chooses to differentiate itself, it ties itself in knots and appears incapable of doing basic political maths.

There is no appetite for change within the DNC, who's tone-deaf hierarchy continue to block progressive voices at every turn, preferring to endorse party hacks and corporate stooges. They do so with an arrogance borne out of contempt for the very people that they are meant to represent. It is stupidity of monumental proportions based on the assumption that their base has nowhere to go.

It's an assumption that could well be their undoing.

There are moves afoot to create a viable third party. Unions are looking to form a labour party. The greens continue to attract disaffected voters and there is, of course, a “draft Bernie” movement.

The DNC, is, of course, aware of these movements. By and large, they dismiss them as being under-resourced and incapable of mounting a serious challenge. There is one caveat that makes that assumption extremely dangerous. His name is Bernie Sanders.

Sanders went within a whisker of winning the Democratic primary despite being severely handicapped by the DNC. In fact, if you take the time to read the analysis from number crunchers like Greg Palast, Bernie probably won the Primary. There is no doubt that the enthusiasm and goodwill that Bernie generated within progressive ranks in 2016 still makes him the most popular political figure on the left in the country today. But Bernie's popularity counts for nothing with the DNC. You could make an argument that they hate him more than they hate Trump. There is simply no way that the DNC in its present form will allow Sanders anywhere near a nomination for Presidency. They cheated him once they'll cheat him again. Deep down, Sanders must know this.

The temptation to form or join a third party must be great.

There are only two possible reasons I can see that Sanders would not take action.

The first is that Sanders has made some commitment to the DNC. I can understand him adhering to such an agreement in 2016, but surely whatever commitments were made have long past their use by dates. Of course, there's always the possibility that the commitment isn't entirely voluntary – the Podesta email claiming ”sway” with him comes to mind here. In which case, Bernie will have to decide whether the price of running is worth it.

The second, I find more plausible. Sanders fears being seen as the spoiler in the same way that Ralph Nader was back in 2000. While the fear is understandable, attempting to start a revolution within the DNC is just as counterproductive.
The two party left-right paradigm gives an illusion of choice. For Sanders to continue on and run what is likely to be a doomed candidacy from within the DNC only serves to prop up that illusion.

Bernie Sanders must bite the bullet. He needs to turn his back on the DNC and launch a third party and damn the consequences. In doing so, he almost certainly will turn his back on whatever slim hopes he has of being President but he has the opportunity to make a permanent mark of lasting consequence on the US political spectrum.

The time is ripe for a third party to offer a real alternative to the false offerings made by the DNC. With the right impetus and a recognisable face, the third party could grab a significant stake in the House of Representatives and the Senate. The DNC is vulnerable to fresh ideas, honest policies and integrity and it is extremely vulnerable to attacks on these fronts from the left.

Sanders could mobilise support, target DNC hacks and selectively cause them tremendous political grief. The pay off would be immense.

With the balance of power would come great responsibility and an ability to think beyond party lines and for the good of the country. The power of the two major party's would be significantly reduced and there would be more good faith negotiation required. Handled with integrity, the Balance of Power could help a third party break down the two party state and effectively empower the will of the people. Poorly exercised, the balance of power would condemn the party to irrelevance in a single term.
There is no reward without risk.

The question for Bernie Sanders is – does he have the ticker to take the risk?

The fate of American progressives and possibly even American democracy may well depend on the answer.

Excellent analysis @markhodge. Hope to see more of this from you. Your style seems recognizable, do you by chance publish in one of the internet media like alternet or counterpunch?

As to your post above, if a Repub. goes third party then it won't matter if Sanders siphons off 20% of the D vote in the general as long as the R spinoff does the same with the R party. I think the Libertarian party has a chance if someone halfway known and popular joins them. Like Ron Paul.

Indeed, the D party has done little to distinguish itself from the R's. Certainly not with Hilary. They very well could on Foreign Policy. If I were Sanders I'd get boned up on this topic because there are a ton of independents who know what's going on overseas and would love someone's bandwagon to jump on.

Thanks for the comments. Ni, I've justs started posting political articles after a hiatus of many years. Undoubtedly the scope for a Libertarian candidate to emerge is there.
As there is for a legitimate "progressive" candidate. I just can't see Bernie being involved. I think he's opportunity has gone, but that's just my opinion

It does seem like the public only gives anyone one try and then that's it, career over.

Do not count on it