What is the difference between ale and beer?

Please bear with me as I give a little background to this post. As mentioned in a previous post (https://steemit.com/drawing/@davidrhodes124/blast-from-the-past-my-old-art-books-from-high-school-1965-1966-part-1) I went to Tadcaster Grammar School in Yorkshire, England back in the 1960's. Shown below is an image of the old Toulston Lodge at the school:

The school was established in 1557 during the reign of Elizabeth I of England: Tadcaster is located between the cities of Leeds (where I was born) and the city of York. Tadcaster is now quite famous for its breweries and so-called "Taddy ales". It actually has 3 breweries: John Smith's, Samuel Smith's and The Tower Brewery (Coors, formerly Bass) (Tadcaster - Wikipedia (https://en.wikipedia.org/wiki/Tadcaster)). John and Samuel Smith were related (Samuel was John's nephew) (Samuel Smith Brewery - Wikipedia (https://en.wikipedia.org/wiki/Samuel_Smith_Brewery). John's father (Samuel Smith the elder) was a successful butcher and cattle dealer from Meanwood, Leeds. Incidentally my own mother and father were married in Meanwood Parish Church on March 4, 1950!

In Roman times, Tadcaster was known as Calcaria because it was rich in limestone. Deep wells through the limestone rock yielded excellent quality water, ideal for brewing: 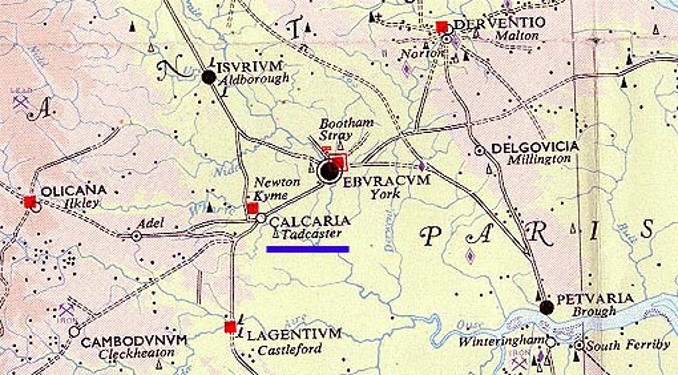 Our geography teacher at Tadcaster Grammar School had a passion for beer, and used to take us (frequently!) on "field trips" to the breweries. I now suspect that he may have had ulterior motifs (namely free beer)!

One of my first jobs as a teenager involved re-stocking the bar at the Railway Inn, in Spofforth (a Samuel Smith pub): My art work from Tadcaster Grammar School includes a picture of Samuel Smith's Nut Brown Ale (https://steemit.com/drawing/@davidrhodes124/blast-from-the-past-my-old-art-books-from-high-school-1965-1966-part-3). Hence my interest in ale and beer! But now to get to the main subject of this post:

The difference between ale and beer

Originally, prior to the 1500's, breweries in England produced ale (i.e. beer without the addition of hops). It was one of the most common drinks during the Middle Ages. It was consumed daily by all social classes in the northern and eastern parts of Europe where grape cultivation was difficult or impossible. It was recognized that the brewing process (which will be described in more detail below) essentially sterilized the water used to produce it, and so it was much safer to drink than water in terms of transmission of disease and parasites. Back in 1500's the English were quite passionate about ale, and were opposed to the practice of adding hops to make ale into beer. English ale and beer brewing were carried out separately, no brewer being allowed to produce both. The Brewers Company of London stated "no hops, herbs, or other like thing be put into any ale or liquore wherof ale shall be made – but only liquor (water), malt, and yeast.“ Hopped beer was opposed by many, e.g.

“Ale is made of malte and water; and they the which do put any other thynge to ale than is rehersed, except yest, barme, or goddesgood [three words for yeast], doth sophysticat there ale. Ale for an Englysshe man is a naturall drinke. Ale muste haue these properties, it muste be fresshe and cleare, it muste not be ropy, nor smoky, nor it must haue no wefte nor tayle. Ale shulde not be dronke vnder .v. dayes olde …. Barly malte maketh better ale than Oten malte or any other corne doth … Beere is made of malte, of hoppes, and water; it is a naturall drynke for a doche [Dutch] man, and nowe of late dayes it is moche vsed in Englande to the detryment of many Englysshe men … for the drynke is a colde drynke. Yet it doth make a man fatte, and doth inflate the bely, as it doth appere by the doche mennes faces and belyes.” Andrewe Boorde. A Compendyous Regymentor a Dyetary of helth. (1557), fol. G.ii – iii (http://self.gutenberg.org/articles/eng/History_of_beer). Coincidentally, this was written back in 1557, the same year that Tadcaster Grammar School was established.

Ultimately, however, the practice of adding hops to ale to produce beer was found to be very beneficial for preventing spoilage, and facilitated larger-scale production and export of the product, and the English eventually succumbed to this practice:

“The use of hops in beer was written of in 822 by a Carolingian Abbot. Flavoring beer with hops was known at least since the 9th century, but was only gradually adopted because of difficulties in establishing the right proportions of ingredients. Before that, gruit, a mix of various herbs, had been used, but did not have the same preserving properties as hops. Beer flavored without it was often spoiled soon after preparation and could not be exported. The only other alternative was to increase the alcohol content, which was rather expensive. Hopped beer was perfected in the medieval towns of Bohemia by the 13th century. German towns pioneered a new scale of operation with standardized barrel sizes that allowed for large-scale export. Previously beer had been brewed at home, but the production was now successfully replaced by medium-sized operations of about eight to ten people. This type of production spread to Holland in the 14th century and later to Flanders, Brabant and reached England by the late 15th century.” (HUMANITY’S FAVOURITE DRINK: THE HISTORY OF BEER - bodahub (http://www.bodahub.com/the-history-of-beer/)).

As indicated above, ale brewing starts with only 3 ingredients: barley, water and yeast. Barley seeds (packed with starch) are placed in a warm, moist environment and are allowed to germinate. This process is called malting: 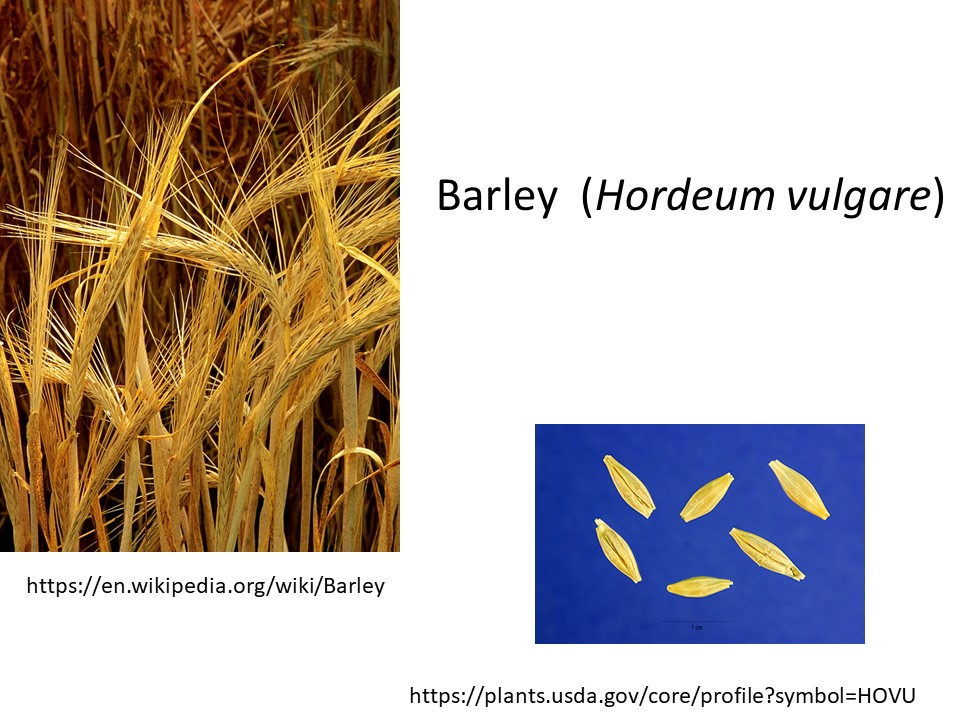 During germination the seeds produce a hormone (gibberellin) which in turn induces the expression of the alpha-amylase gene. The alpha-amylase enzyme then breaks down the starch to maltose and glucose. Starch is essentially a polymer of glucose, and maltose represents a disaccharide composed of 2 glucose molecules: 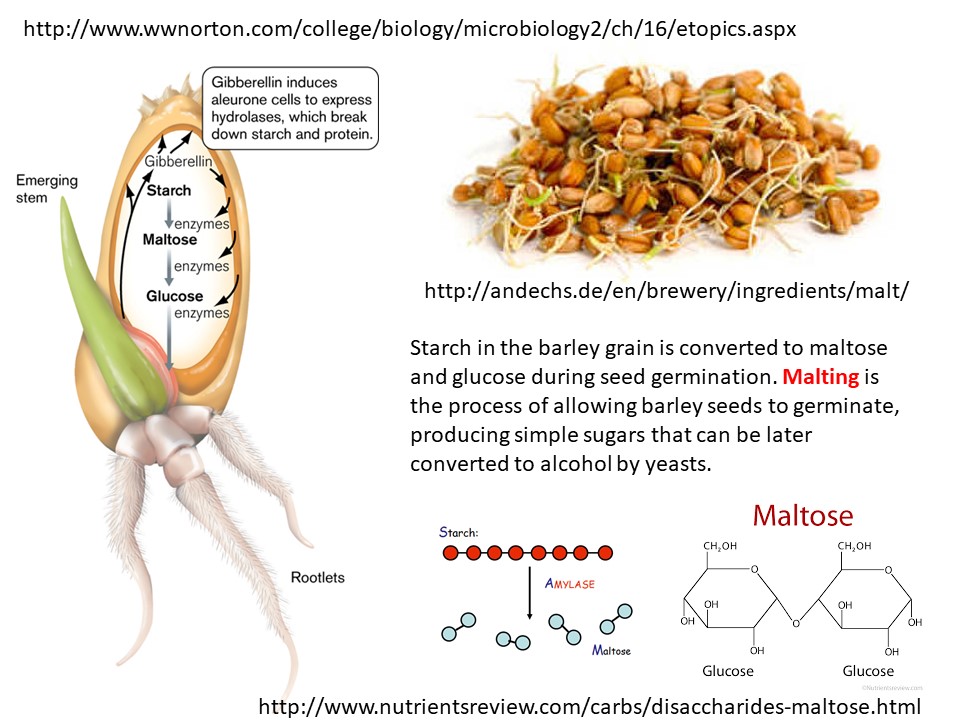 The sprouted barley seedlings, are then treated with boiling hot water to extract the maltose and other nutrients. After cooling, yeast is added to the "wort" to promote fermentation, a process in which the yeast converts maltose to glucose, and eventually to alcohol (ethanol) under anaerobic conditions: Ale is actually quite nutritious, containing numerous essential vitamins, amino acids and minerals. It is sometimes referred to as liquid bread (the latter also being made with yeast). The invention of bread and beer has been argued to be responsible for humanity's ability to develop technology and build civilization (History of Beer - Wikipedia (https://en.wikipedia.org/wiki/History_of_beer)).

Adding hops to the boiling "wort" provides for better preservation (and hence long distance transport) and imparts a bitter flavor to the resulting beer: 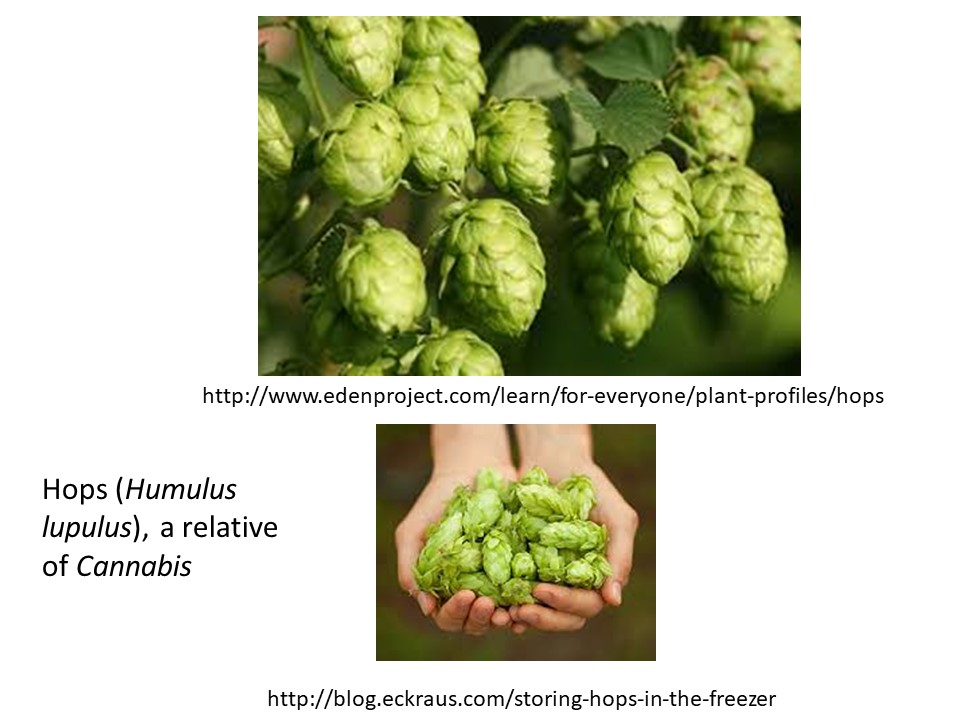 Hops are the flowers (also called seed cones or strobiles) of the hop plant Humulus lupulus [Cannabaceae]. Hence, hops is a relative of Cannabis. Male and female flowers of the hop plant usually develop on separate plants (that is, the plant is dioecious), although fertile monoecious individuals appear occasionally. Because viable seeds are undesirable for brewing beer, only female plants are grown in hop fields, thus preventing pollination. Female plants are propagated vegetatively, and male plants are culled if plants are grown from seeds. Hops are used extensively in brewing for their antibacterial effect that favors the activity of brewer's yeast over less desirable microorganisms and for many purported benefits, including balancing the sweetness of the malt with bitterness, contributing a variety of desirable flavors and aromas (Humulus- Wikipedia (https://en.wikipedia.org/wiki/Humulus)).

The hops flowers contain humulones and lupulones which undergo chemical transformations during the the process of boiling "wort". So-called "skunky beer" results from exposure of beer to light via the photo-mediated conversion of these molecules into off-flavors. This is why beer is typically bottled in green or brown bottles which prevent light from being transmitted through the bottles (De Keukeleire, D. FUNDAMENTALS OF BEER AND HOP CHEMISTRY. QUÍMICA NOVA, 23(1): 108-112 (2000) (http://www.scielo.br/pdf/qn/v23n1/2152.pdf): The oldest evidence of beer (ale)