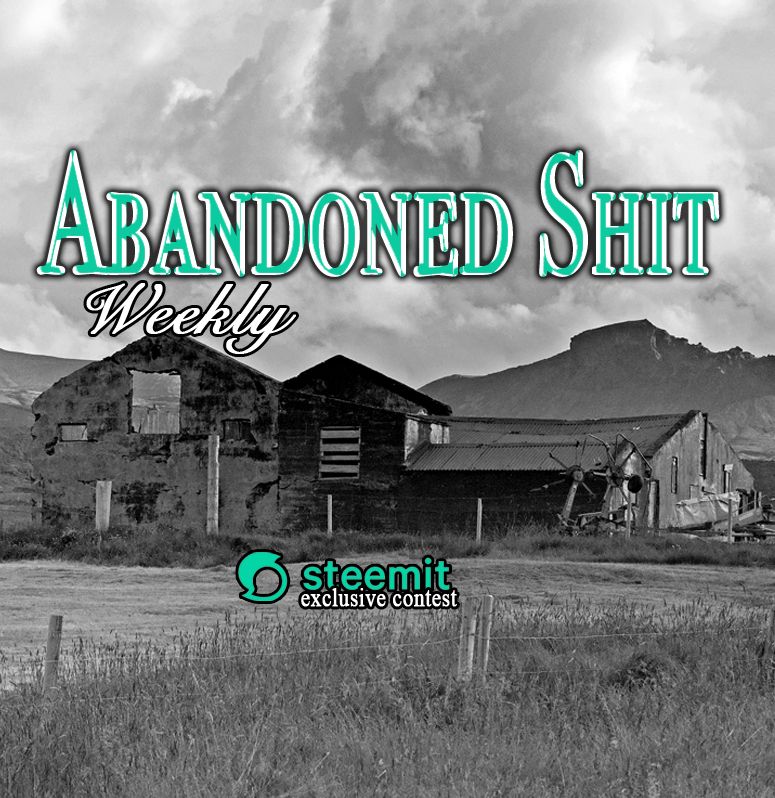 REMINDER:
Hi gang! Just wanted to put out a reminder that there is only around 2 days left to enter the Abandoned Shit Weekly Contest. The current week's theme is "Black & White". The photos should be in black and white, but the SUBJECT can be anything abandoned. Houses, vehicles, factories, roads, playgrounds, etc etc. No theme for subjects, only on the photo style, which again is Black and White. Lots of great stuff has already be entered, I can't wait to see more. Here's a refresher of the contest information: @daveks joined Steemit around the same time I did, so I've had the pleasure of seeing him post incredible sights and scenery from around Canada since joining the community. Quite a while ago, he also began hosting the weekly B & W Photo Contest, which can be found right here: B&W Photo Contest. Be sure to check it out or enter if you're into black and white photography! The fact that @daveks hosts such a contest makes him the perfect judge for this week's Abandoned Shit Weekly Contest!

This is NOT a photography contest, though this week does have an artistic flair to it.  The subject matter is what's being judged with the Abandoned Shit Weekly contest, not one's skills with a camera.  Honestly, I just want to see some cool abandoned shit.  lol  HOWEVER, as with any photograph, the "wow factor" can certainly be enhanced with a technically sound execution.  Simply put, winners won't be chosen strictly on artistry.

This week's theme = BLACK & WHITE! The photos must be in black and white/grayscale. The subject, however, is complete unlimited! It can be houses, factories, cars, trucks, airplanes.. whatever! Just as long as it's man-made and it's abandoned. The feel and tone of black & white imagery may really add to some of these cool abandoned shit photographs; I can't wait to see what you guys post!

Rule #1 = Your abandoned shit photo must be posted using the tag #aswcontest for one of your tags.  This is crucial so that your entry can be seen/found!


Rule #2 = Your photo must be taken by YOU. If you take an imagine from the internet and use it as your entry into this contest, you will be disqualified and I will flag you.

Rule #3 = Only ONE entry per user, per week. Multiple photos can be put in one entry post, as long as they're of the same place/object that you're using as your entry.

Rule #4 = Tell us what we're looking at!  You don't have to write a novel, but let us know what the picture is of, and where you found it.  That's the most interesting part! Equipment and camera settings can be included at your discretion, but is not necessary.

When = New ASW contests will start on TUESDAYS and will end at 11:58pm EST on SUNDAY.  Winners will be announced on Monday with awards distributed then as well. I figure it's a good way to start the week!

HELP! - I'd really like this contest to become an established, weekly feature.  Resteeming the official contest announcement post here would be a huge help in getting the word out, though you do not HAVE to in order to participate in the contest.  I'm just asking as a favor.  Also, just mentioning the contest in/on your entry post would help a lot!

Sponsorship- If anyone would be interested in helping out with sponsoring the contest, please do get ahold of me on here, on steemit chat, or in the ASW discord channel at the link a bit farther down. You can sponsor 1st, 2nd, or 3rd Place rewards. Or anything else for that matter. Anything helps! All sponsored money will go right into further promotion of the contest. 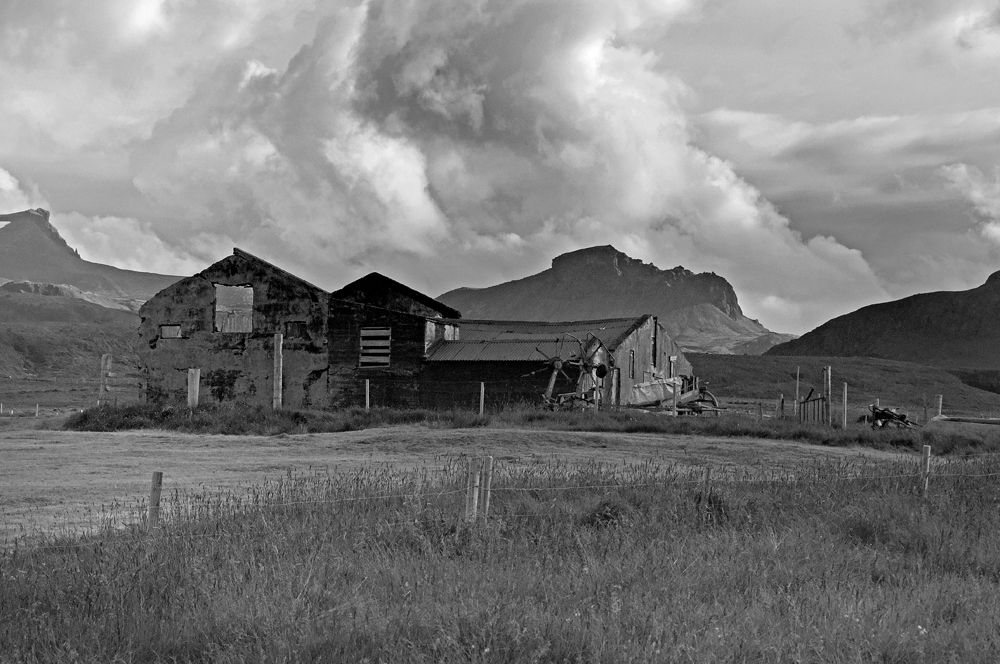 ^^^Here is the photo used for the contest logo above. This was a dilapidated farm house we came across in the western part of Iceland, on the Snæfellsnes peninsula.

Compete in modern times by remembering the times of black and white.

I'm not entering the contest, because I'm not a good photographer, but your photo deserves a comment. That's a story in itself. I can see the people there, imagine why they left. I read a few books by Halldor Laxness, novelist from Iceland, won the Nobel Prize in Literature. He describes hard times, difficult life. Grim, grim, and yet unforgettable, like your picture. If you haven't come across his books, I recommend them. Start with Independent People. I hope I'm not inappropriate, since I'm not entering, but this is an honest response to your powerful picture.

Wow, thanks for your comment @agmoore. My wife and I love Iceland. We've gone 4 times now. Last July we got married there even. I'll definitely check out that author. I'd love to hear more recent history of the country, especially first person accounts. Usually, you just hear about Vikings and the sagas. Check out one of my earlier ASW contest posts as it featured another neat abodned house in Iceland. Here's the link: https://steemit.com/awcontest/@customnature/abandoned-shit-weekly-contest-2-homes-35-sbd-prize-pool-aswcontest
Also, this isn't a photography contest. It's the subject matter on trial with this, not photo quality. You should join!

Lucky you! Have to admit I'm also interested in Sagas and the Vikings. Sagas for the poetry and glimpse of history they offer. The Vikings because I'm astonished at how large a role slavery played in the settlement of Iceland. It seems a lot of Viking "brides" were captured from the British Isles and brought to Iceland. Amazing to me how widespread slavery was, in Europe, in the early Middle Ages. Nothing glamorous about that.
I won't enter the contest--I know my limitations. But thanks for the invitation :) Thank you for organising this event. It will always encourage new people like us to stay on steemit longer.

Thanks! Glad you enjoy the contest.

luck for all who are competing... I love that people like you are encouraged to help the community, keep it up ... Success!

Thanks @anasuleidy! I'm super happy with how many people have been participating in the contest. I've seen so many cool things and places posted since the contest started a few weeks ago.

I love this idea, but I am not sure I could do a weekly post. Can I just drop by from time to time if/when I have a photo that fits your theme?

Cool contest, I need to see if I can discover something cool to take photos of. 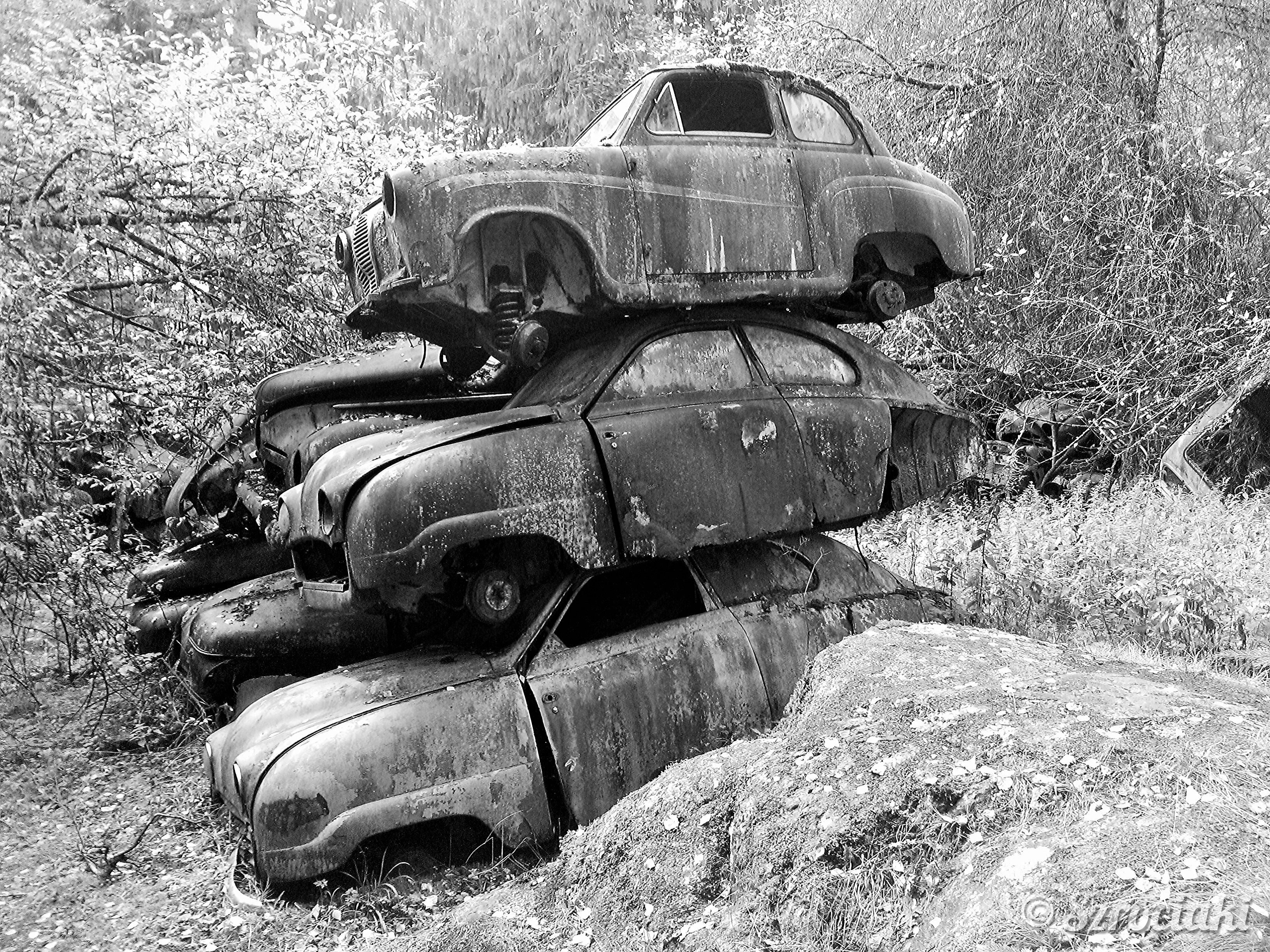 Why haven't I seen this before???
This is very interesting... my regret I just followed you today. I should've known you before. I'm not a photographer but I'm interested to read the participants' posts.

So, are abandoned kids qualified too?
just wondering... hahaha...
I will just participate in your next week's contest.

here is my entry hope you like it :D 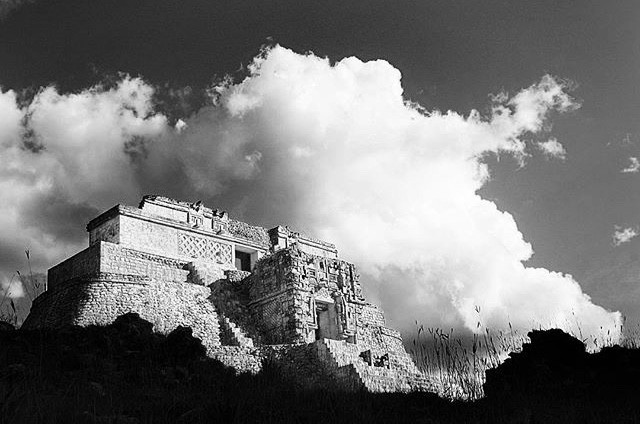 Thanks for holding this contest @customnature. This is my entry.
https://steemit.com/aswcontest/@a1baes/my-entry-to-abandoned-shit-weekly-7-abandoned-strorage-of-farm-quipments 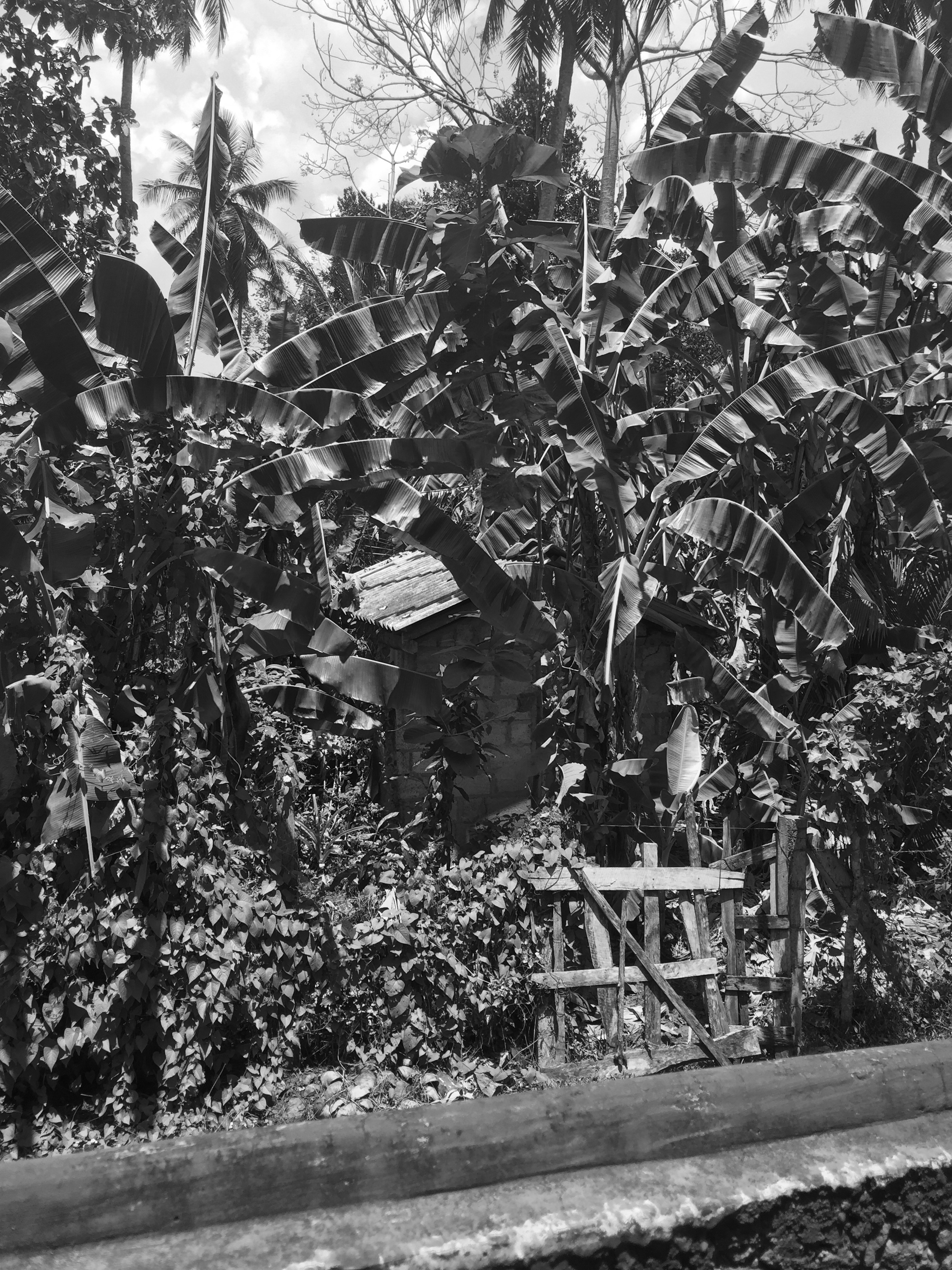 Congratulations, your post received one of the top 10 most powerful upvotes in the last 12 hours. You received an upvote from @upme valued at 126.05 SBD, based on the pending payout at the time the data was extracted.

Thx for the reminder! Just in time to put in my entry :) good post, and you deserve the dream you want, sorry, I'm new in steemit, will you help me?

This is a great competition! Please find my entry here 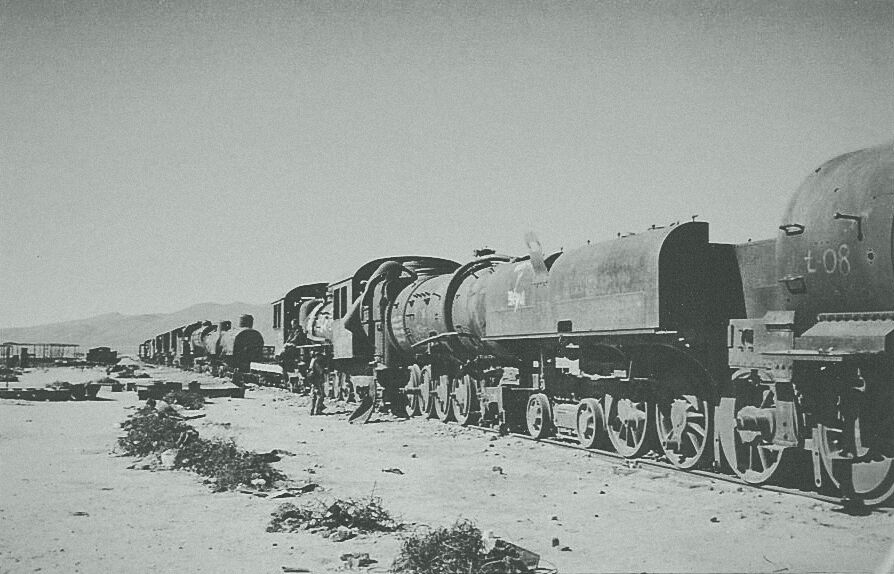 We too, in our arts collective, began carrying out art abandonment everywhere lol

I am not entering the contest; however I love what you are doing here. My daughter is a Photographer and I have told her about this site. She is currently waiting for approval though. When she is approved maybe she can get in on something like this. I am also a new member and have found the steemit community to be very welcoming to new comers.

Our entry to this contest: https://steemit.com/photography/@sukhnidheyfilms/shhhhh-someone-s-sleeping Awesome photography! i'd like to see more of these! 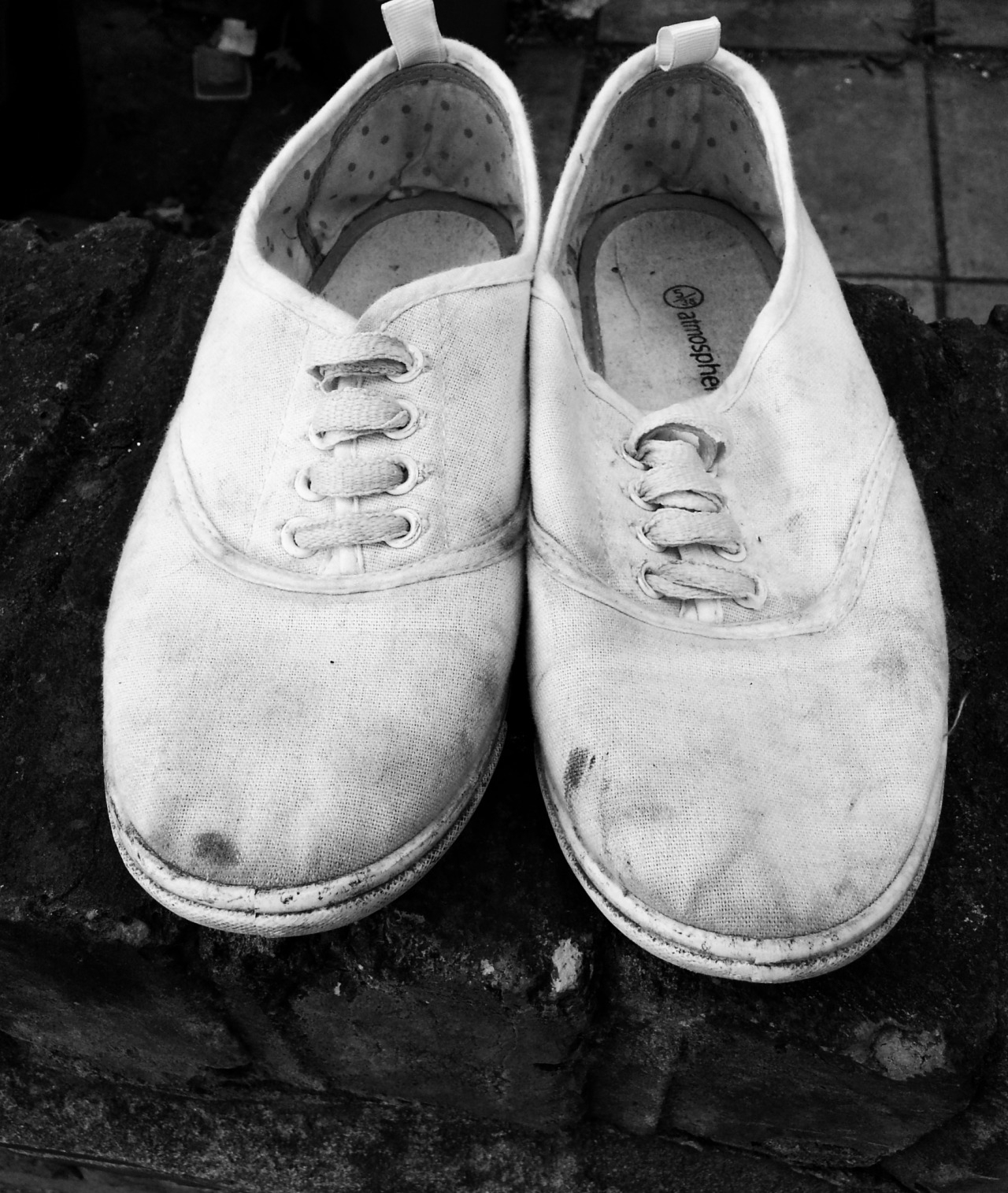 I love this contest like it was a photography contest...amazing!

i want participate in this contest😊

It's dark right now but tomorrow I'll go get some photos of abandoned shit. I'm in Trinidad and trust me, there is PLENTY of subject material. Ha

Here is my entry for this amazing contest :
https://steemit.com/aswcontest/@himalayanwomb/aswcontest-b-and-w-rescue-helicopter-crashed

That was close! :D Found your contest just a few hours ago, but here is my entry:
https://steemit.com/aswcontest/@dennis.bacchus/en-abandoned-soviet-outpost-wuensdorf

My visit there didn't catch it all, but I hope the photos can transport a fraction of the atmosphere.

daer #customnature your nature photography is a wondarful...& awsome art...i really love your all post..
thanks for sharing..dear I look forward to each of your posts..

I can see the people there, imagine why they left.

You want to advertise, then post about it. Don't spam people's comments section.