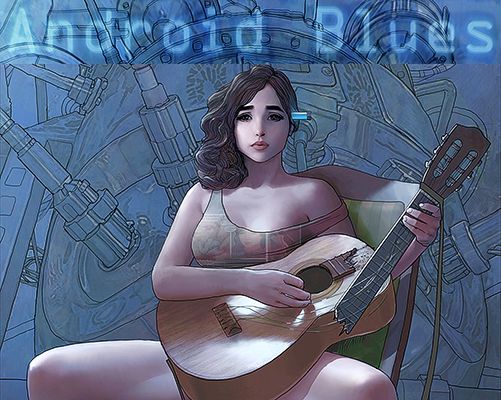 I want to introduce you to my comic,
written, penciled, inked, and colored by me. For a few pages I had a friend who collaborated as an editor, but he got bored with it. Even the text is a special Photoshop font I made, using my own hand-writing. :)

I started writing this story twenty years ago, but at first it was a screenplay. Many years later I realized it would never be a movie, in fact it would never be anything, unless I finished it myself. And the only way I saw to be able to do that, was by making it a web-comic. That was about 5 years ago now. Time flies.

People keep asking, will I ever print it? I don't know, I'll probably try some day. Maybe a Kickstarter, or maybe Steemit can be the way it happens. We'll see.

Here's the first cover I made. It shows the main character, the artificial human named Lisa, trying to play the blues but instead just feeling blue, as she's yet again reminded that there are certain things humans can do that she can't. The full version, without the title. 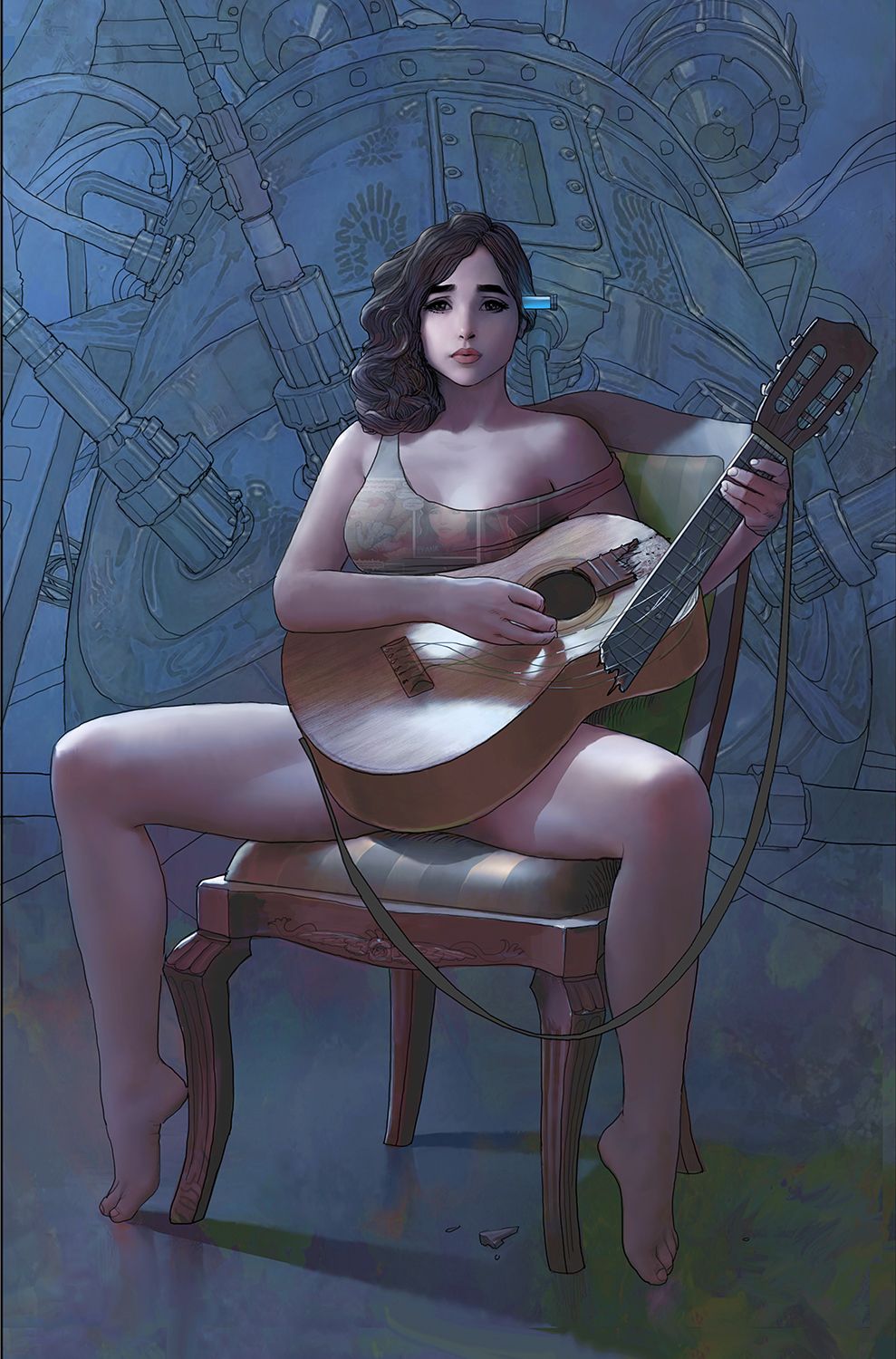 My name is Steven Stahlberg, I joined Steemit in December 2017. I was born in Australia, grew up in Sweden, but now live with my wife in Kuala Lumpur. I've lived here about nine years so far, and love it!
I work as a lead artist in a game company here. I use an older version of Photoshop with a Wacom Intuos 3, larger size.
Thanks for watching!

instantly drawn in by the style of your art and your story. i will eagerly await the presentation of this work of yours!

More beautiful art by you! Everytime I visit, I'm amazed. Thanks for sharing.

🎉 Congratulations @stahlberg! 👏, your amazing Artwork has been selected to be featured in my curation post. I hope it brings more viewers to your excellent comic :D

I used to love comics... but I have to admit I haven't read some in a while. Apart from "Mortadelo Y Filemón," which I use to improve my Spanish Comprehension Skills.

Well, I hope you release it... and speaking of Kickstarter, you can always wait for Accorn Collective. That seems exactly the kind of project they want to integrate in their platform:

I'm curious to see what these guys do. They certainly don't lack ambition.

When you say it's not yet printed, do you mean it's not available digitally either, or were you referring just to trade paperbacks, etc.?

It is available as a webcomic, yes, I was referring to printed on paper. You can find it online if you like, but anyway I'll post all the pages I have so far here in my blog, in order, at a rate of about 2 or 3 every post. It'll just take a few weeks. :)

Amazing art work, @stalhberg! Her expression is great. Really shows the emptiness and longing. Also really love the tone and the mood of the colours.

I really hope you get to tell this story by finishing the comic.

Would be awesome to see how she evolves in the story. Do finish it! I know it's daunting, but you only live once. Would be great to see it done.

amazing comic!!! will you color all pages too? this is really great to see :D (btw if you could use the #steemit-webcomics tag too that would be great)

The art for this looks amazing!

Kinna like that Scarlet Johansson flick, where ironically she played similar character. Lucy and Ghost in the Shell.

Yes, that's why it would never become a movie. If I had made the comic 20 years ago when I first had the idea, maybe. Now there have been many movies with a similar theme.
It's true, don't remember seeing Rose before, but she does look a bit like her. :)

I'm looking forward to seeing how this project works out for you. It would be so awesome to just work only on your comic and have it fund itself.

Man I'm in awe .. The multitude of styles that you can pull off is just baffling!

Looking forward to the finished comic, I haven't read any since Watchmen :)

Thank you! I will post more when I get out of work tonight! :)

Oh Niice, so we have a 3D printed android, I like sci-fi 😉

You know I love your comic! Already read all of waht's available on your website. Absolutely love these begining sequences and the cover art. In the next pages one can also really feel that you know well the area where it's happening, if I am not wrong. Which givesa good sense of the place.

Thank you! By the time I get caught up with posting it here on Steemit there should be another page added or two, we'll see, I try to go as fast as I can but sadly I chose a style that takes time to produce, and almost always I have other paintings I have to work on as well. So I keep jumping back and forth. :)

It's not sad to take time to make good work! :) I see it a bit like organic stores: it's better, there's less productivity, there's a trend for it and people are willing to pay for quality.

Love the mechanical thingy in the background :D So cool~

You are the Super Sayayin of Steemit artists :D

Amazing talent, I really love the title picture. Good for you for taking the initiative to get it done yourself <3

awesome, I will dive right in and explore

this is a lovely idea 💡 you got down in drawing @stahlberg ....well I was wondering if it's possible to could get in touch with Warner Bros or a Movie producer ...maybe you could partner to make an animation movie out of your story.... Nice job there!!!

Looking back a the intro and is really amazing how you did it, very enticing and wants to make you know what this is all about!
👏👏👏