Making of "Grande Venusmachine" - Tribute to an Old Master

Like so many others, I was always fascinated by Botticelli's "Birth of Venus".

When the members of the international artists group "Libellule" were given the theme "Tribute to the Old Masters" for the 2013 Exhibition in Paris, the decision was clear for me.

We were supposed to choose an Old Masters piece, or part of one and combine it with our own work on a canvas 77"x52". My idea was, to combine Venus with some mechanics typical for my work and thereby creating the "Grande Venusmachine" As you can see, I documented the process of painting it. So, lets start at the very beginning, with priming the canvas. I add several thin layers of gesso and sand each layer, to get a smooth surface. The last layer I put on literally by hand: 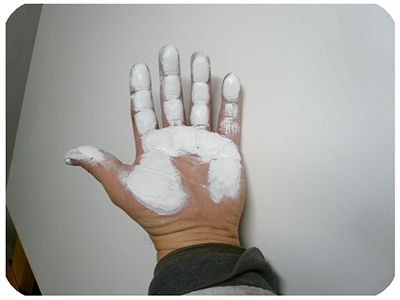 In this case, I started with a white canvas and transferred my drawing with blue pigment, as you can see on the left. Then I did a first drawing in blue acrylics, to have everything "secured" on the canvas. Next I added a colored ground in a semi transparent orange-ish English red tone as you can see in the picture to the right. The drawing still shines through and I already added a first rough idea of dimension. Now the whole painting is done in white acrylics only. This way, you can focus on building up the form, without worrying about color. Its basically the same process, I already described in another post about this technique. Of course I had to have a printout of the original Venus close by, to make an accurate copy.

The cloth is there to reduce the vibration of the canvas, which can be annoying with a piece this size, particularly, when you "draw" thin cross hatching lines with a brush. Remember, the figure is roughly life size! 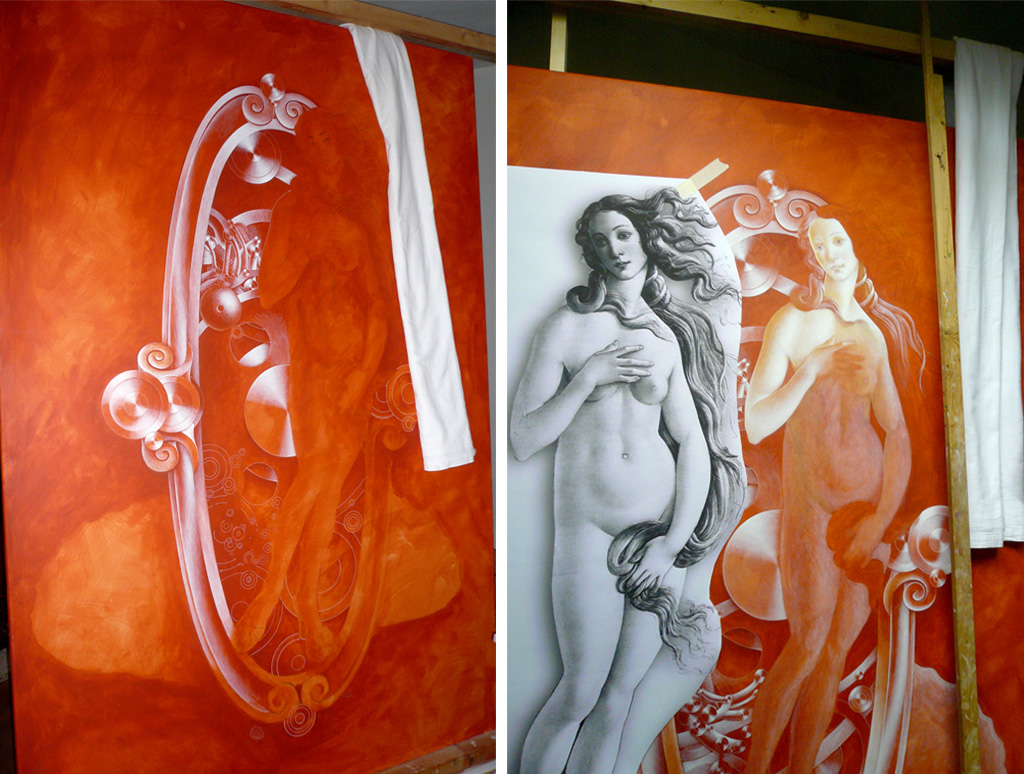 Here are some details:

Eventually a first painting in white is done. I also changed the back ground a bit. 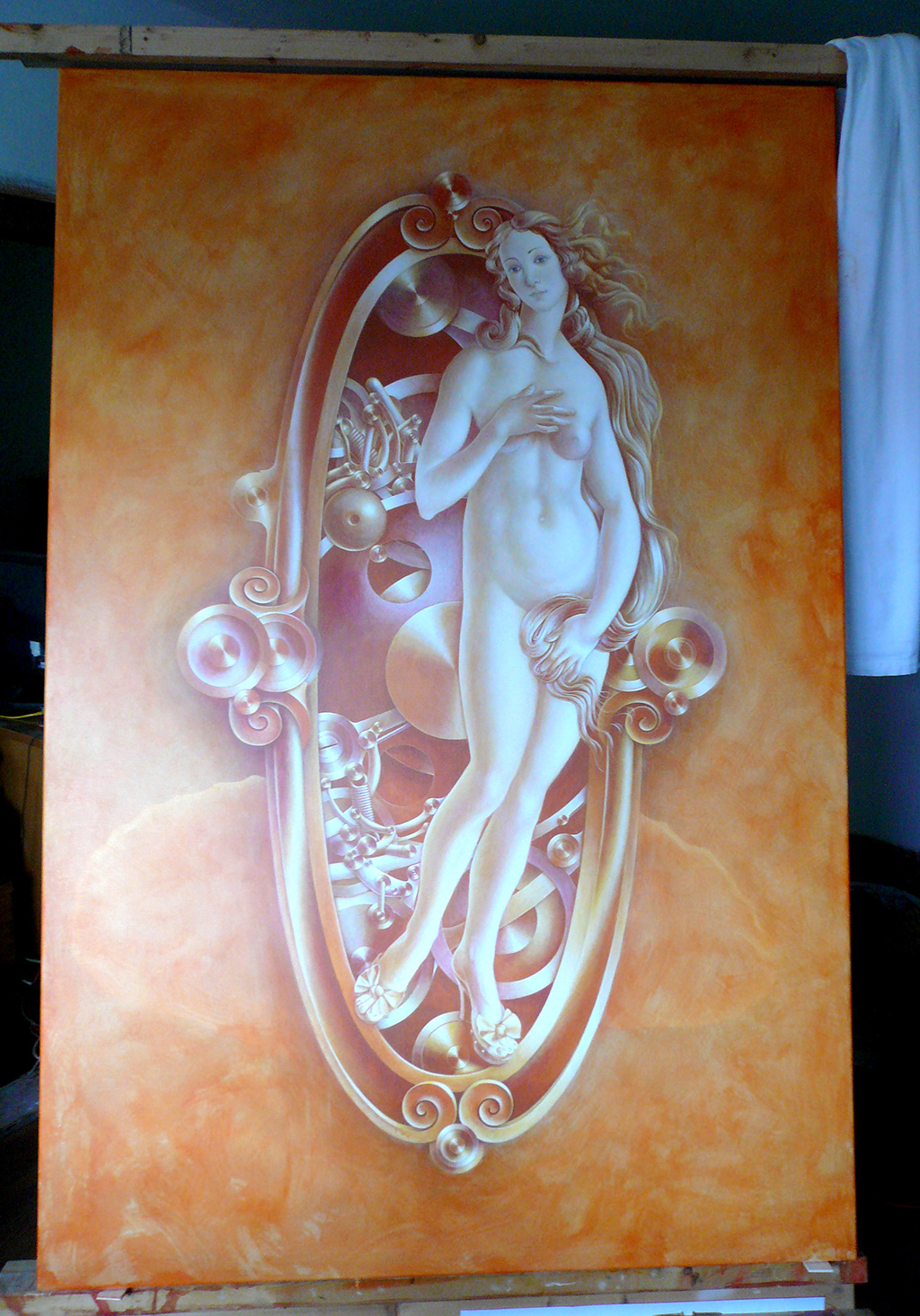 In the next step, I add an even glaze of very thin ocre to the whole painting, to give it a yellowish tint, followed by another step of painting in white only, this time focusing on the brighter areas and defining the form even more. This way, one creates the form based on mid tones and "lights" as you can see in these details: 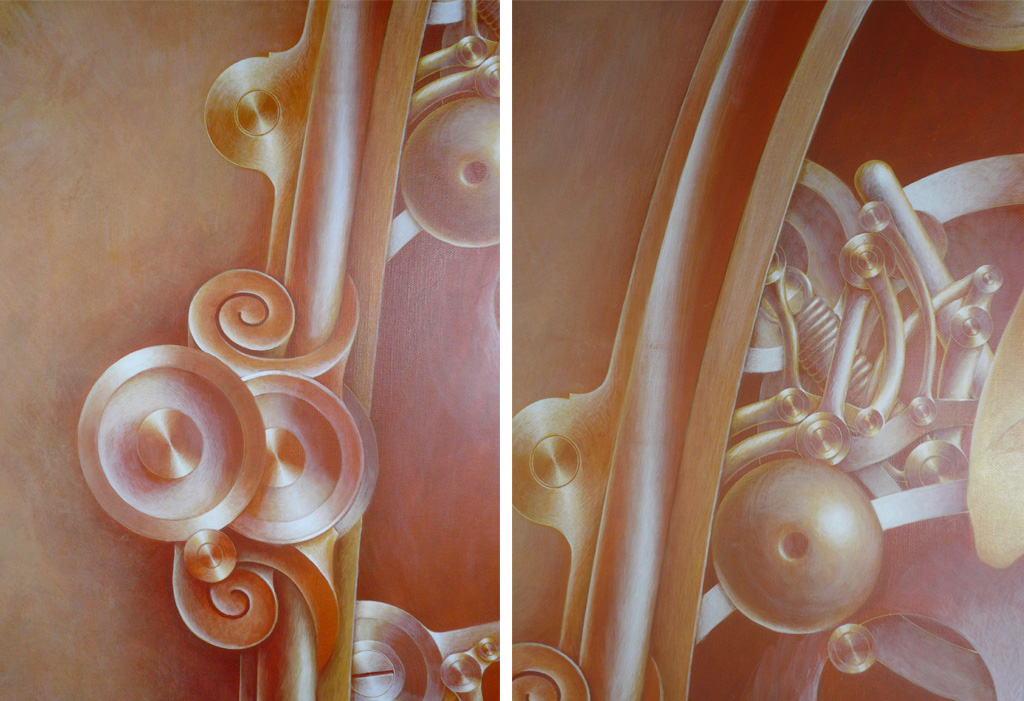 Once my underpainting in acrylics was finished, I continued in oils. Thin glazes in mostly transparent pigments. After some fine tuning, I had the right red for the back ground and slowly all the other colors were added. When additional highlighting became necessary, at this point I had to do it with egg tempera, as acrylics wont stay on oils long term. Of course I had to make some changes to the original (barefoot) Venus ;-) 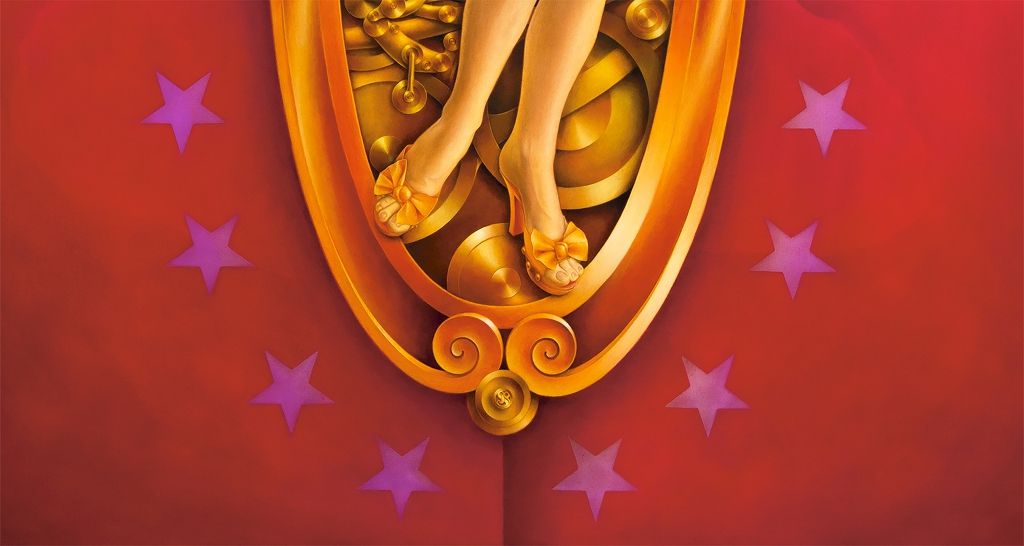 After some 10 weeks and adding the stars, I finally had my finished painting. There is some underlying symbolism in both color and some of the shapes, but I'm not sure, if its "sfw" to tell ;-) In December 2013 the painting was shown with the Libellule group at the prestigious "Salon Comparaisons", part of "Art en Capital" at the Grand Palais in Paris. The building is absolutely phenomenal: 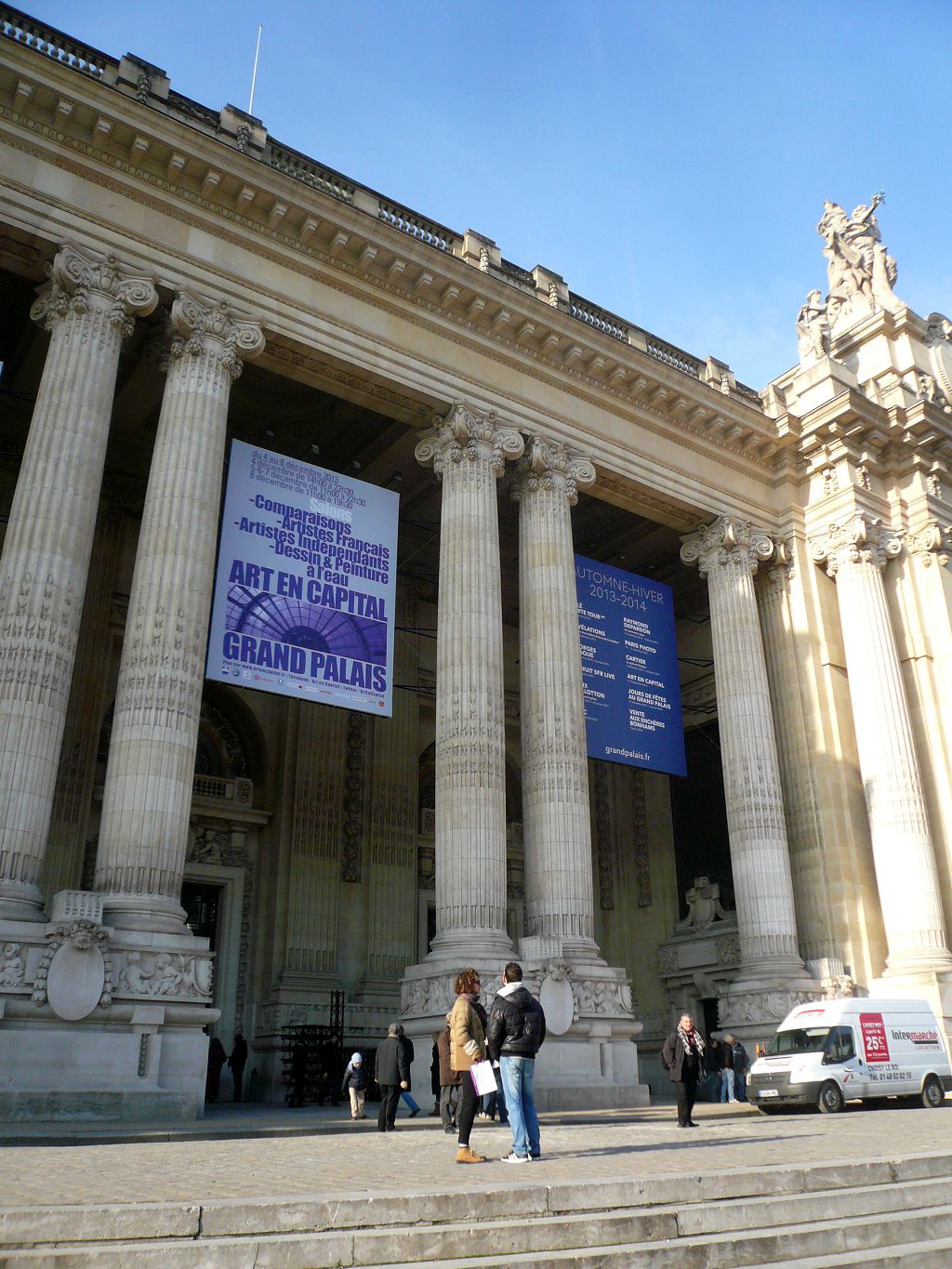 And I have my name on the big board! Thank you very much! I really like this technique. It allows me to "build" things exactly the way I like it.

great job indeed!
I have been in a collective exhibition in the Grand Palais too, in 2001. it was organised by the institut franco japonais at Paris. The place is really amazing!

Doesn't surprise me that you presented your work there as well. Its truly one of the most breathtaking places where I have ever exhibited my work!

My upvote is in recharge mode but I need to say how perfect this is, her skin is so soft but everything else is cool and smooth.

Haha... Don't worry, I find myself in the same situation all the time and I really appreciate your comment :-)

Precise. There is no human hand or tool trace. Great work!
Cheers!

Thanks a lot. If you look close enough, you can see the cross hatching of the underpainting... Interesting work on your blog!

This is part of the painting, somehow making it more earthly. The finesse is important.
Thanks! I'm still a toddler in this world of art. You know how it is :)

Every painting is a new challenge, no matter how many you have done :-)

Indeed! It's like rewiring your references and knowledge every time, to be fit for the next concept and the struggle after that. even before you are at the end of your current work you know what is the next thing you will place on the canvas. Knowing that the process will be completely different.

Yes... and I sometimes even forget, how I did something or solved a particular problem!

This is the problem with improvisation, we tend to forget small bits from the problem- solving mechanism that we invented for a similar situation, if we apply it anyways the result is going to be different, not mandatory bad. But this means that we're not having full control over our work. I guess for you this is not a problem, cause this is a reason for you to think of more efficient and appropriate way to solve the puzzle. And this happens every time. Like a spiral. And the solution is going to be better every time. And if you forget some of them, this means that you have tons in the аrsenal.

The meshing of the two styles is so great. (Those shoes are a fabulous addition, I must say!) And I still find your painting process to be totally fascinating.

Thank you very much! Tried to not test your patience too much and made a post, where you can actually see a finished picture :-)

Thanks a lot, always nice to get a compliment from a fellow artist :-)

oh, Im not even half as good as you are... amazing artworks and extraordinary imagination!

I like your work, and I had a lot of time to practice to get to where I am now... still learning every day ;-)

It is not just a saying that we learn our whole life :) I will do my best to catch you ;)

Your paintings are stunning, I admire your technique and precision!

Thank you very much! The technique was actually developed by the old Flemish masters... and the precision is just something I enjoy :-)

Venus gets your trademark stilettos. =)

Hahaha... and you don't even give the upvote! You leave another spam post like that, I will flag you.. provided you even have any reputation left by then!

Wow! Incredible beautiful! Thank you for sharing important details about the painting's progress.This technique is fascinating and the results are so beautiful!

Thank you very much! You are mastering the mische quite well yourself, so your appreciation means a lot to me :-)

This is a phenomenal artwork, i loved all the little details, especially the shoes that you put an Venus:)It realy updated her:)

Thank you very much! Just had a first look at your blog and see, you are a skilled and gifted artist yourself... glad you like my 21st century Venus :-)

You are very welcome and thank you very much for your kind words:)

What an accomplishment and what amazing work. Again, I love the process!

Cordial thanks for your kind words. I like to paint in this somewhat outdated way, as I too really like the process/method. You develop a very deep connection to your piece as you spend a lot of time with it.. with great devotion.

Absolutely breathtaking - I LOVE Botticeli's Venus! I love your work - following and looking forward to seeing more of your paintings! :)

Thank you! Glad you like it... working a lot on glass again right now. Looking forward to see more of your art too :-)

Simply beautiful. I like how you adopted Botticelli's work and added to it, but such in such a pretty way. Love those shoes! ;-) Also, congratulations on the exhibition. Seems like I was not the only one who liked it.

Cordial thanks! When doing a piece like that, you really learn to be humble next to the masterpiece from centuries ago. I tried to pay my highest respect to master Botticelli!