Carving herself out of the nourishing poly-nano-substrata.
Hatches, rises and increases the meta-haedron's inner shell.
Expected to de-atomise, un-modelize, she is a high rank Téhérinae. 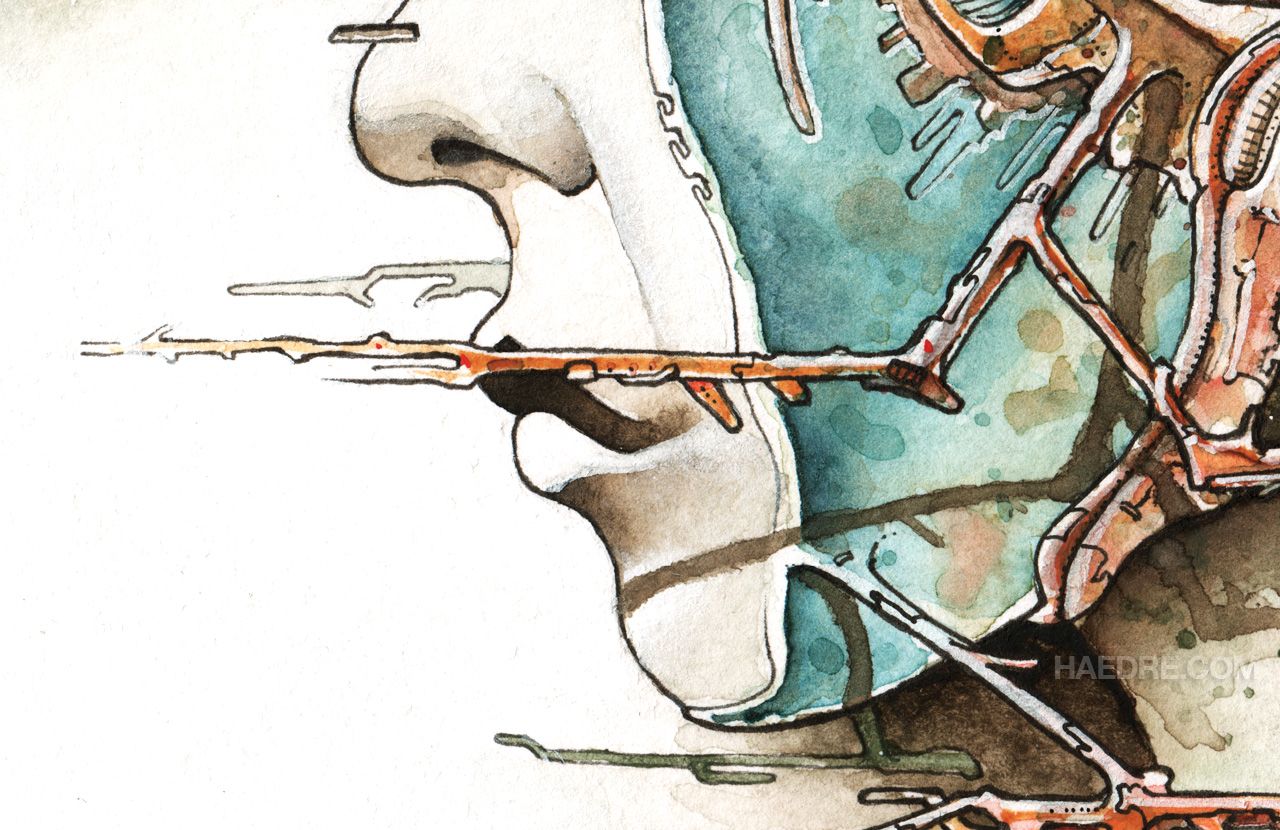 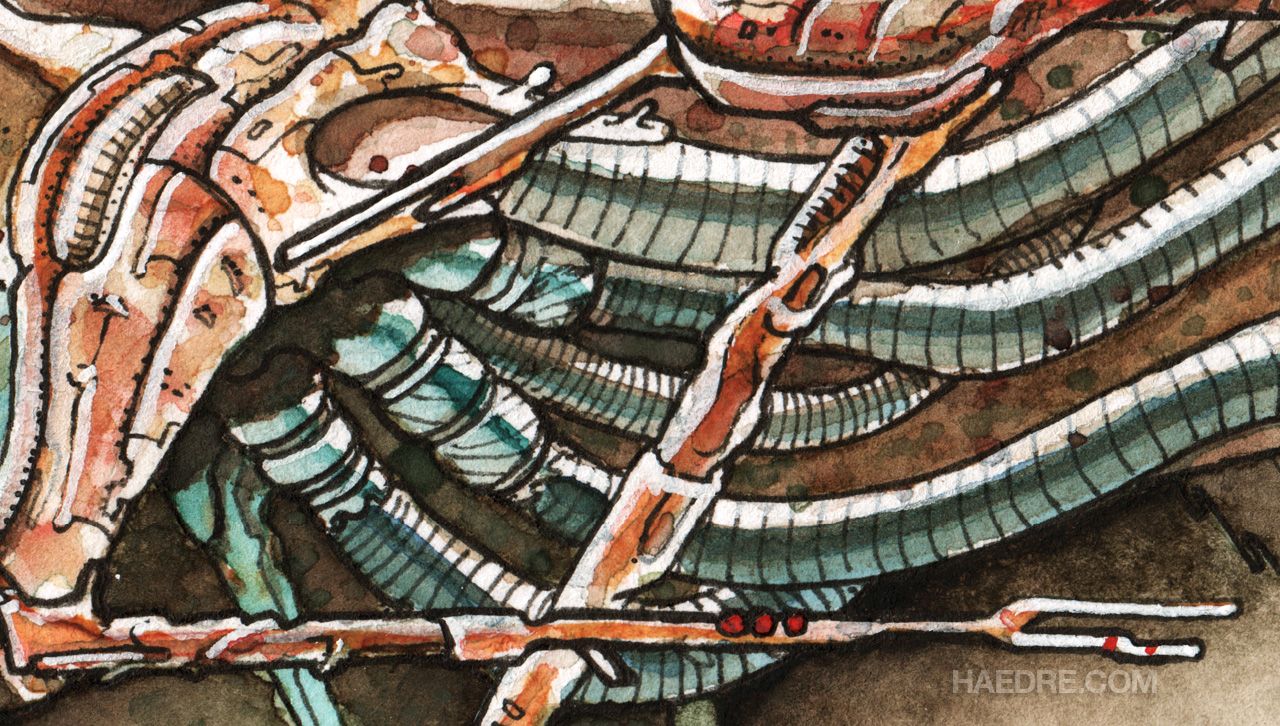 Hi, welcome back to my blog. Looks like I just finished a new piece! Let's have a peek at its process!

Like a few of my last works, I used that rather cheap, side glued watercolour paper block. Started with a pencil from an idea that was going on in my head for a week. I went pretty deep for some details already which I don't always do. And devised some of the shadows because I wanted the shape to have a somewhat impossible, surreal or illogic. Basic preps were necessary while at the same time letting space for further mind schnorkelling. 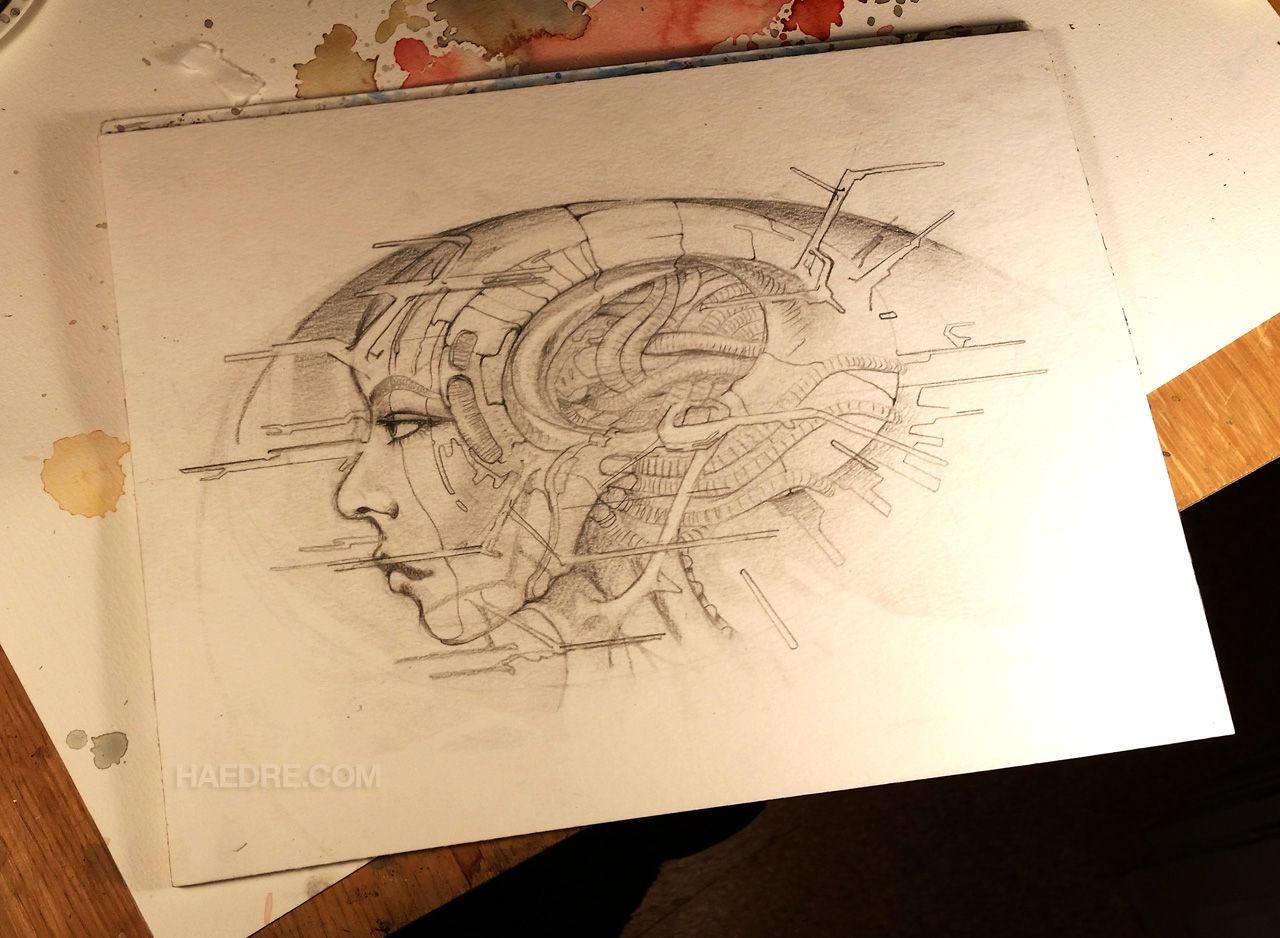 I also went more detailled with the ink this time, as usually I just put the very lines I need. Ink done, pencil erased. Since the block is small I also scanned it (when it's tensed on a woodboard it's often too large or too thick formats which then don't pass in my scanner) . It's a while I am thinking about re-applying the inked outlines over the painting after the definitive scan. However that's a technique I'd prefer to reserve for comics so I won't do it here :D
Who knows maybe I try later. But in this case I want the piece to look how it looks in real. 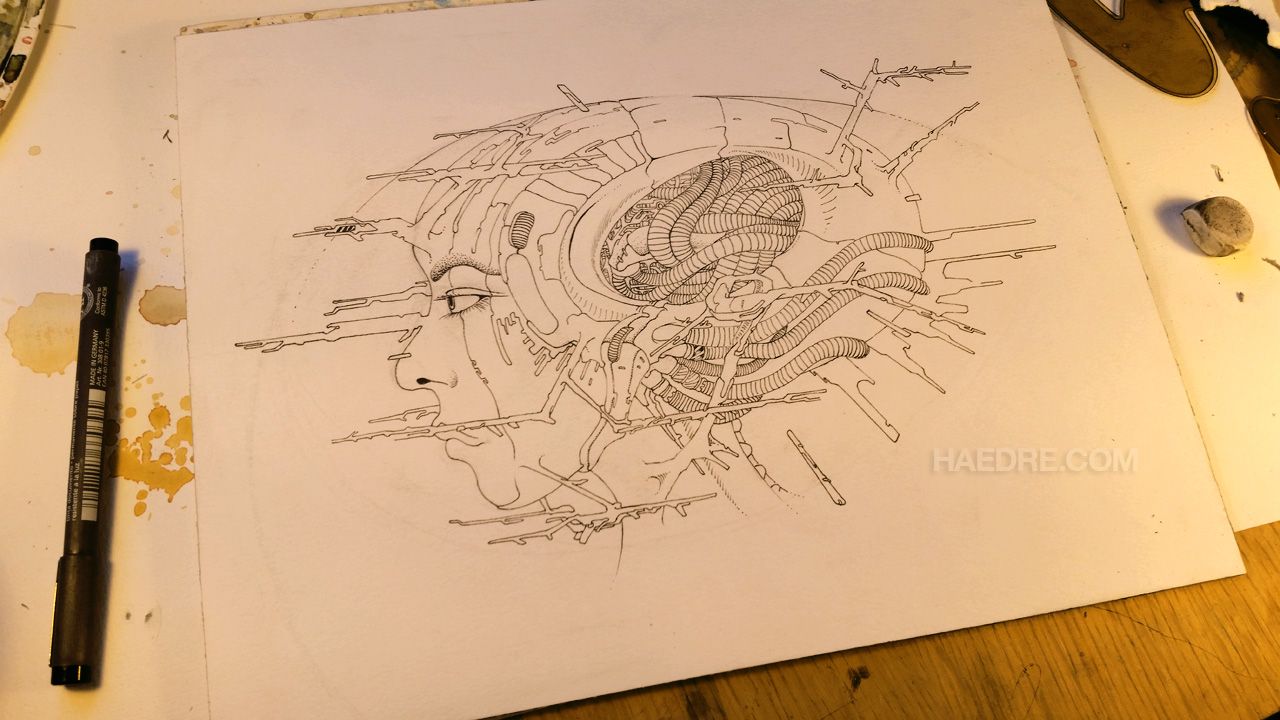 To pre-texture the epidermis, I threw random, rather colorfull drops ans splats. Ochres, siennas and reds for the "skull". Paris Blue and light yellowishes for the metallic part of the visage. The greenish shadow is "Terra verde". 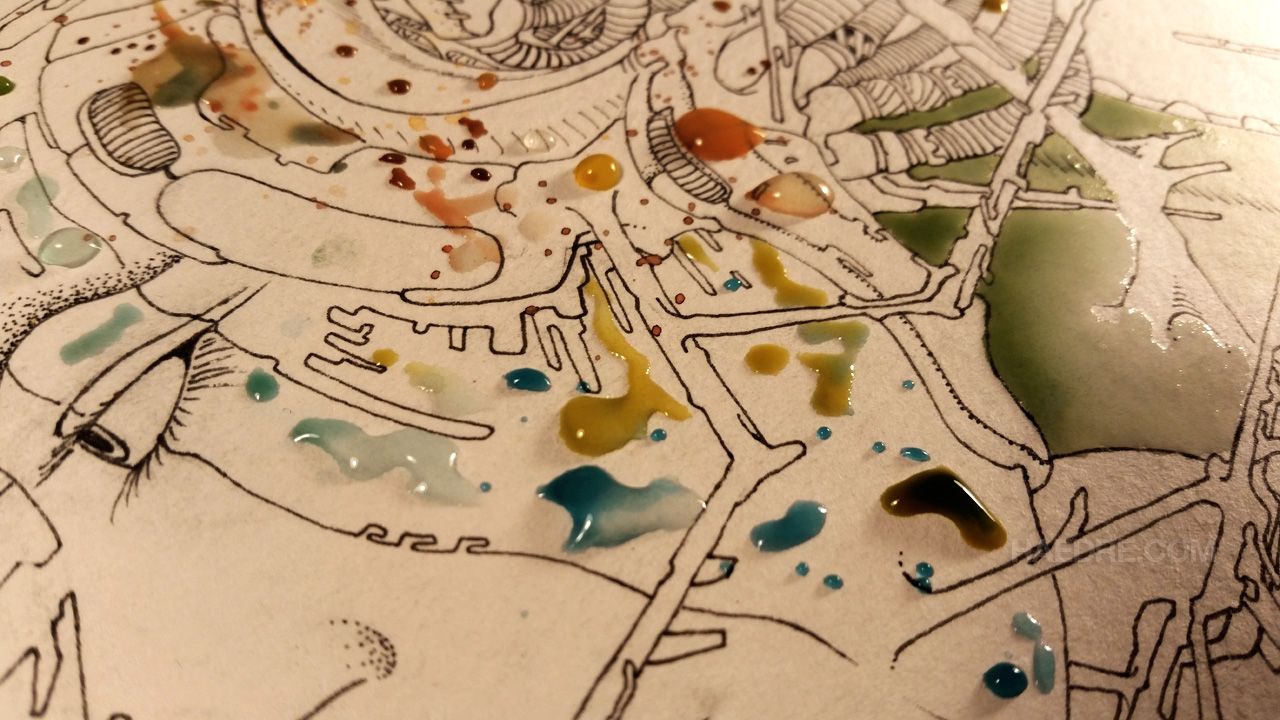 When I start colouring, I often have a primary idea of working with specific tones but most of the time I get caught in trying complementary colours. Beyond this point, there's enough colours, so I bring back the thinliners, exacerbating some outlines, making new details, textures, pointillism. I add white, ink, color, white, ink, color and so on. I also added red on the arrowish antennae shapes and bits that are on a foreground, as warmer colors tend to appear closer. Cast shadows were the last step. 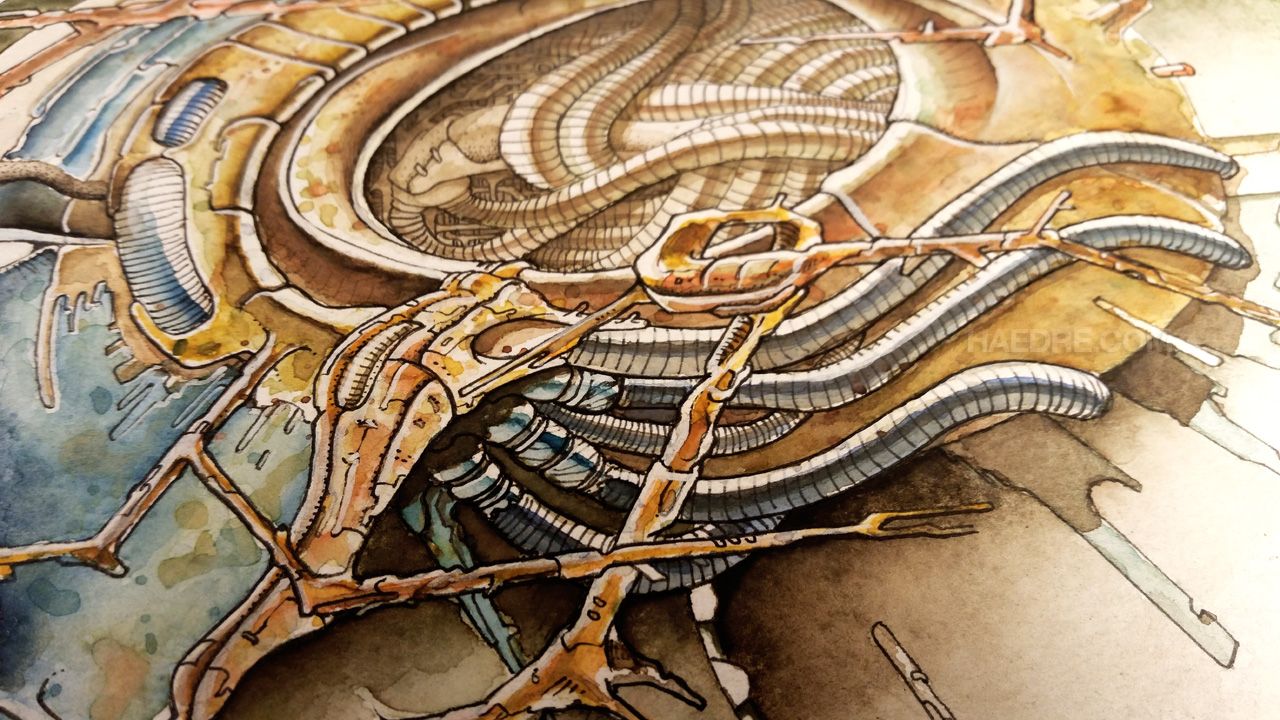 If you have carefully observed some of the pictures with an enhanced cybo-eye (Type Owl TZ98), you might have wonder where did the smudgy curve of pencil stain that was on the left side go. Well, I was indeed finding it irritating but didn't really know what to do about it. Final decision was to cover the complete surrounding with white gouache. Which seem to have worked fine!

And so it's been finished and signed! While the job, I was listening to Lovecraft's audio books "At the Mountains of Madness", "The Shadow Out of Time" and "In the Walls of Eryx".

Thank you for having checked my post, I hope you enjoyed it!

Dedicating to art in a rentability driven world is tough! Consider to support me through http://www.patreon.com/haedre

And/or directly with cryptos!

Thanks again! Please don't forget to

Glad it can give you something @wolfgangsieberth =)

Yes it does, i find it super amazing to see the process of art work, especially this one, it makes it actually art, real, somehow three dimensional. There is also Fotos of Picassos Guernica, when he made it, and that is also super interessting, as it shows the development of the painting.

How pretty she is...Lovecraft is a good source of inspiration

Thank you @patschwork! Yes the flux of words like "the impossible angles" and "cyclopean structures" are perfect to paint :D

wow! this is pure art! My respect for your talent and great work!

Thank you very much @gabriel.ncl!!

She is beautiful in sketch and finished version, congratulations :). Very thoughtful post also.

Thank you so much @scrawly! Glad you appreciate =)

i get a biomorphic, giger-esque vibe from this. what are some your inspirations? i appreciate your thoughts and notes in your post. keep it up :)

Hi @supernal, thank you for your comment! My inspirations are definitely H.R. Giger, Moebius, Akira, Gunnm, Blame!, The cast of the Meta-Barons,... basically the classics!

damn man that's a list i can vibe with. Jodorowsky is amazing; I've not seen anything as immense as Holy Mountain, almost nothing tops it.

I still haven't watch Holy Mountain!! Will do one day hopefully :D

Reminds me somewhat H.R Giger stuff of course much less creepy...
Very interesting what you do 👏👏👏, it's always a pleasure visiting your blog! 😎

Thank you @melooo182! Sure I know Giger. No Giger = No Haedre :D
Yeah he was the best for total bleak, bone-like, bio-machinery ...
I am a huge fan, finally went visit his museum in Swizerland a few years ago.

And of course I know Jodorowsky's Dune documentary =)
I also have tons of comic books from him; "The Incal", "The Cast of the Metabarons", "The Technopriests", "Megalex", ....

If you like crazy and obscure comics I can recomment to check out for "Philippe Druillet", he had founded the legendary "Heavy Metal" (Métal Hurlant in French) magazine with Moebius and others...

Oh yes Jodorowsky's comics are RAD!!! I have some of them in digital format 😎 the only way I could carry with me given I've become a semi-nomad...because of life circumstances..

I have them digital too, always on me =)

Congratulations! This post has been upvoted from the communal account, @minnowsupport, by haedre from the Minnow Support Project. It's a witness project run by aggroed, ausbitbank, teamsteem, theprophet0, someguy123, neoxian, followbtcnews, and netuoso. The goal is to help Steemit grow by supporting Minnows. Please find us at the Peace, Abundance, and Liberty Network (PALnet) Discord Channel. It's a completely public and open space to all members of the Steemit community who voluntarily choose to be there.

That is some super cool art! I really love how the whole tech/sci-fi angle is combined with old fashioned water color, it's like a marriage between futurism and history

Thank you very much for appreciating @pandorasbox! I do also dig the mix ;)

You've really hit the ball out of the park with this one. My gosh! In constant awe of your work @haedre!

I must admit I am pretty happy of it :)))) Thanks for digging it too @manouche!

It's wonderful to see the dance of colour and light in those watercolour droplets before you spread them and add the magic to your amazing drawing. Well done! I love it.

Thank you for the nice words @donnadavisart =) Indeed that step with the pre-texturing was a lot of fun, spent a good time just looking at the behaviour of these droplets!

This is very well done, reminds of steampunk, but yours has a twist, cool

Thank you very much @losthippie!!

My fellow artist @haedre, I've added you to my weekly round-up artist support initiative future! Keep up the good work and wish you all the best in your art future! MeGy :) #supportartist

Thanks a lot @megy.fine.arts! An honour =)

This is some awesome stuff, @haedre