loreshapergames (65)in #archetypes • 3 years ago

I'm going to shift the focus for my Archetypes series to using Pearson's personality archetypes (affiliate link), to talk about what you can do to utilize them as a storyteller and also show them in their own right in games, giving these characters space to shine powerfully in your stories.

Note that I am not going to be sticking entirely to Pearson's work, as I tend to drift away from other writers' work. My focus is more extrinsic than internal, and as a result what I am looking for is catalysts for interaction and storytelling.

In addition, the Destroyer is rarely presented first. It's the most interesting to me, and one I think about most often, so
I'm writing about it first.

So what is the Destroyer as an archetype, and why should you use it?

A Note on the Shadow

Jung's concept of the Shadow is important to note when we talk about archetypes, and in case you've missed our other Archetypal series on the Hero and the Nemesis, we'll review the concept.

A person or archetype's Shadow is the thing that poses a threat to their moral, ideal, life. It is a character trait that is often invisible to them–it doesn't necessarily have to be terrible and wicked, but it is something that impedes their progress toward their best possible self (since knowing oneself is important for the sake of overcoming the self).

As we talk about the personality archetypes, we'll be relying on this notion of the Shadow to explain why a character belonging to an archetype tends to be villainous or tragic (in the sense of the tragic hero) instead of purely heroic.

It's not uncommon for people to assume that the Destroyer lends itself to villains–it does–and villains alone–it does not.
In fact, many of peoples' favorite heroes are easily characterized as Destroyers. Let's talk about what drives the Destroyer, and it'll become clearer that it is a powerful basis for strong characters.

The Destroyer is a catalyst of metamorphosis. While many Destroyers seem to act irrationally, there is often a calculated method to their actions: it takes the extant and creates a void.

The notion that a Destroyer can't become a hero is often caused by our own conception of the Destroyer in our lives.

A Destroyer who is aware of their Shadow (which is the tendency to engage in self-destructive or needlessly cruel acts due to detachment) can work around it if they have a good reason to.

These people are responsible for changes in the status quo. Unless you're living under despotism, the Destroyer has contributed to your life with a series of upheavals in the social order.

This makes the Destroyer important psychologically to us: even if we don't bear a particularly strong element of the Destroyer in our lives, we use the Destroyer's fruits every day. This is where the stereotype of "girls fall for bad boys" comes from: it is not that anyone is consciously seeking trouble, but the Destroyer is capable of protecting others to the point of changing the world to fit what they need.

In many ways, it's the human element of our psyche, a consuming rage and desire to make the world fit our needs.

And the Destroyer is necessary because people are frail, and others are not. While it is important not to assign too much social responsibility to the Destroyer (other archetypes like the Warrior and Ruler make better protectors), they are still necessary to beat back the wilderness and tame the night.

It's worth noting that Christ is essentially a Destroyer archetype in many of his incarnations in the Christian tradition.
The Destroyer is the incarnation of death, but it is also involved in the ending of evil. Christ's role as a sacrifice (something only the Destroyer is really able to do well, since they're able to totally detach from even their most dear bonds) provides an end of death on a fundamental level: providing a pathway to a world where evil and death are no longer existent on an essential level. 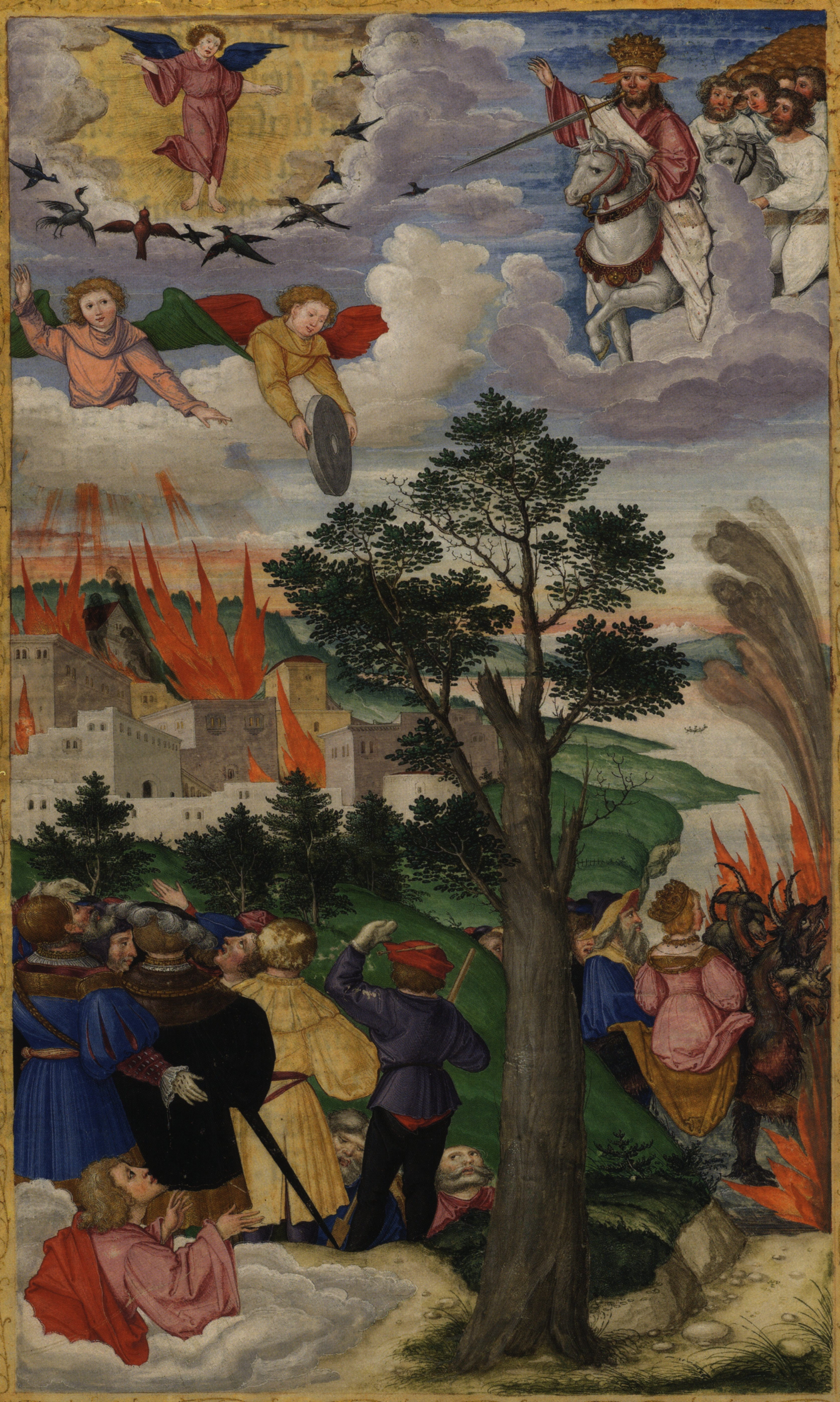 The Destroyer in Star Wars

In Episode IV, Luke is a plucky farmboy who winds up destroying the Empire's super-weapon. That's a lower-case D, for clarity's sake. So how is he illustrating the Destroyer?

It comes down to Luke's relationship with the Force. His final run on the Death Star trench involves using the Force, accepting that his limitations rule his body and mind. Guiding a starfighter-based weapons system with a metaphysical force, he is able to win the day for his people precisely because he listens to the old man who everyone else is too skeptical to listen to (especially Han Solo, a wonderful embodiment of the Orphan archetype who I will probably talk about as well).

Luke's motivation in this act is to remove a threat (a Destroyer trait, even if he does so for positive reasons like a Warrior or Ruler might), but he also abolishes his own will and image in the process, rewriting himself as a Jedi in the common sense if not the literal sense.

In The Last Jedi, however, we see a very different side of the Destroyer in Luke.

He becomes consumed by fear and isolation, heading off into a solitary life on the far end of the galaxy. He is still seeking death, but lacking the drive to suicide he chooses the closest thing: exile.

It is revealed that this is not his first fall to the Shadow, either. His actions were responsible for the creation of the Kylo Ren persona when he turned on his brightest pupil out of fear.

In this he goes full-circle, becoming a tragic hero and also illustrating the strengths and weaknesses of the Destroyer, albeit across different storylines.

Using the Destroyer in Storytelling

How can you use the Destroyer in storytelling?

The Destroyer taps into a fundamental message of our psyche: we will die.

There is no avoiding this truth, even if science and technology manage to give us clinical immortality we will ultimately fall afoul of something, or else cease to exist in a recognizable form.

The Destroyer simply embraces this.

They can be angsty, broody, misanthropic creations. However, this is more due to the burden they bear than due to the intentions of their spirit. They often seek death in the form of self-destruction, and their redemption lies through a path of upheaval.

But the Destroyer, if they are strong in their archetype, doesn't feel pain. They shed vestigial limbs and ignore the scars of the past.

They make great villains, yes, because they are enigmatic and arbitrary. They test others, pushing them to walk their path. Many Destroyers are going to inflict suffering on others because they want to harden them, or because they've fallen to their Shadow and want to inflict bitterness on others, perhaps awakening another Destroyer to put them fully out of their misery.

Heroic Destroyers, however, make great supporting characters or protagonists. They are common as tragic heroes, because they do not realize that others suffer and others become jealous. However, even in a more plainly heroic sense, they can be transcendental. They're zen-focused, detaching themselves from pleasures of the world to fix the problems they face.

The best way to make a Destroyer interesting is to illustrate their sacrifices. Their sufferings, although meaningless to them, can be ennobling to audiences.

Using the Destroyer in Games

The Destroyer is actually a pretty common protagonist in games, especially because players often detach from their avatar, choosing courses of action that don't make sense for any other psychological archetype.

To make a Destroyer work, you need to think of two things:

This means that a number of common character types make great illustrations of Destroyer archetypes: the Monk and Barbarian classes in D&D both have strong ties to this personality archetype. Rewarding players for bold and dramatic actions rewards this; Rowan, Rook, and Decard's Spire gives characters rewards not for doing good or acting according to their roles, but for changing the world.

This leads to the Destroyer being the most effective and dominant of the archetypes, which can easily be seen by anyone who follows play sessions.

The Destroyer isn't evil, they're just misunderstood. They are immune to attachments, which makes them seem cold and aloof, and flawed Destroyers inflict harm on themselves and innocents.

But the purpose of the Destroyer is to create a tabula rasa. They turn the world into an even playing field, something that has lost attachment much as they have. They can destroy our greatest fears and barriers, and for that they're important and valuable.

Great analysis. Made me appreciate the destroyer archetype more. It felt like it was the heaviest and most complex among the 3 discussed thus far. I'm resteeming this to bookmark as this seems incredibly useful for game stories & storytelling in general.

Congrats on your 2nd Curie!

To anyone who'd like to support @curie, consider voting for Curie as a witness. Just click curie on this page

Glad you enjoyed the article. We're going to be doing a few more (Pearson has 12 archetypes, and we'll probably cover all of them).

At some point, I may even write a book encapsulating all of this, as I use it in my day-job as an educator.