UPDATE: She Didn't Dump Them. We Got Them. 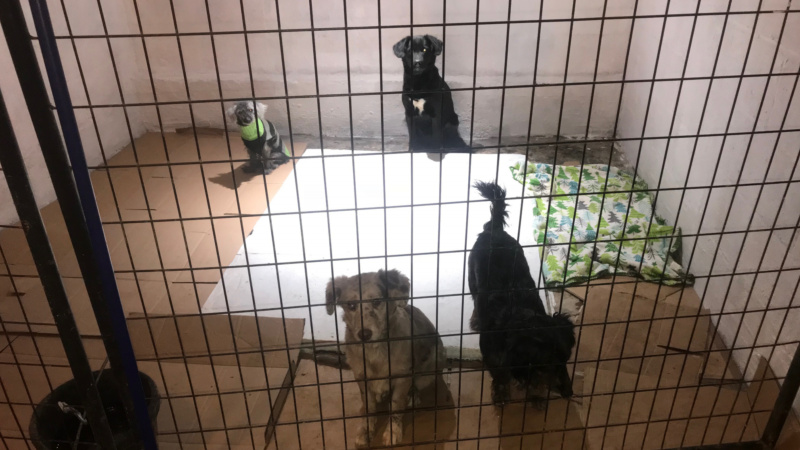 Over the weekend, I posted about a realtor in Tazewell County, Virginia, who threatened to turn a critically ill tenant’s pets out of the house. The tenant is hospitalized with questionable recovery potential and has no family in the area.

Since then, I spoke with the Richlands Police Department and learned that the owner had, in fact, surrendered the animals. The sergeant I spoke with was able to make contact with the realtor and establish a time when my rescue could take custody of the dogs. Today, @arrelaine13 provided transport for all four of them and they are safe tonight with me. Miss Daisy, the senior poodle, has some form of contact dermatitis, most likely a flea allergy. She will see a veterinarian soon, hopefully tomorrow. 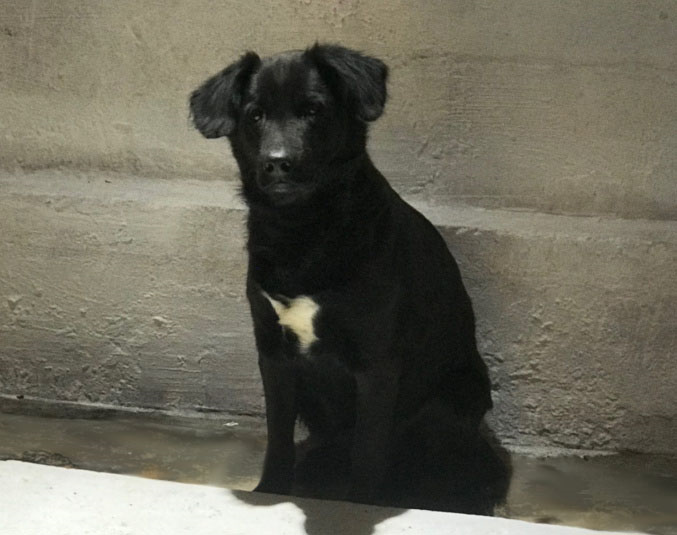 Charlotte is the largest of the bunch, probably a lab mix. She is very friendly, but by far the most circumspect. Cleo appears to be a wirehaired dachshund mix. She’s considerably larger than a dachshund, but has the low-rider body. She’s outgoing and enthusiastic and constantly wagging her tail. 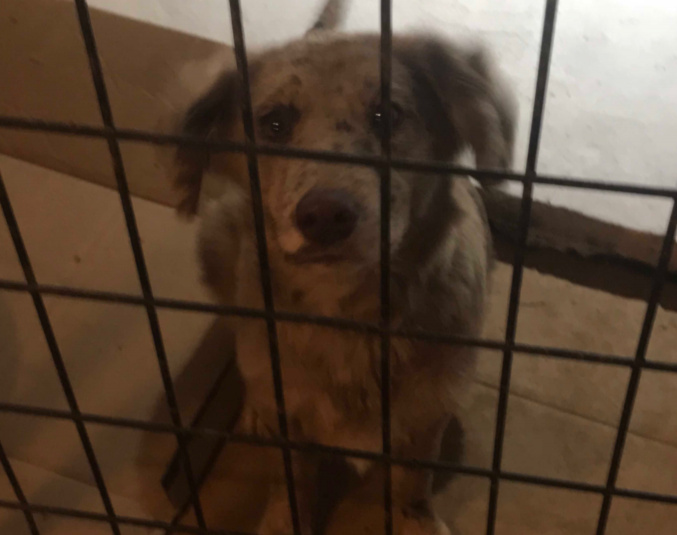 Little Candy is the baby of the bunch, probably around four months old. She appears to be an Australian Shepherd mix, a dilute red merle who may even carry the Isabella gene. I’ll have to examine her eyes and nails in the sunlight to get a better idea of that possibility. Her coloring is beautiful.

Anyone who has followed my blog here on Steemit knows about the problems I face trying to operate a 501c3 rescue in Central Appalachia. I long ago gave up trying to gain the community’s support and cooperation. It’s a closed society, hostile toward outsiders.

The screenshots above and below this paragraph show how bold the community is about wanting no assistance, intervention, or attention called to any of the problems here. These things were said to me tonight because I dared speak ill of native daughter Ramona Simmons. It was interesting to me that several residents piled on this conversation, many claiming to be animal lovers. Yet not a single person asked after the well-being of the dogs that Simmons threatened to put out of the house. 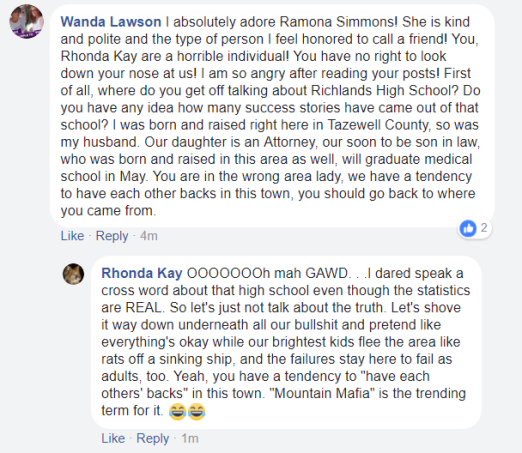 The Tazewell County Animal Shelter has historically operated one of the highest kill municipal shelters in Virginia. The stray problem here can be likened to that of many third world countries. Abuse, neglect, and poor husbandry of pets and even livestock (especially horses) is a way of life in this region. But, just like the high school dropout rate, that is a forbidden topic of discussion. These are issues that members of this community simply do not want to address.

Not long ago, I was featured on the Seeds of Liberty podcast and I talked about the problems in Central Appalachia, Southwest Virginia in particular. Here is a link to a recording of that broadcast. I shared this link with the Facebook users tonight who agreed that I should leave town. From their comments, it’s safe to assume none of them could be bothered to listen.

The problems animals face in this region are indicative of social issues that affect children and the elderly, as well. It isn’t just an animal welfare crisis. It’s a crisis of humanity. My rescue is perpetually in demand when it comes to relieving people of unwanted pets, but the idea of supporting the charity they call on for such help is a concept that has eluded my community for five years. I still want to continue the work because the animals deserve to have a voice speaking on their behalf. This puts me at cross-purposes with a culture that just wants to be left alone. Right now I have 34 dogs in rescue and feed about 30 pounds of mid-grade food a day. I have six female dogs and three male dogs who need to be spayed or neutered, none of which I went out and obtained as pets. All nine of these dogs were accepted by my rescue as a consequence of someone else’s irresponsibility. And I’m the one-woman cleanup crew.

Many people on Steemit donate some of their liquid post rewards to my rescue, which is @tarc. Honestly, we could use a lot more help—especially now, with the additional intakes. We also accept FIAT through PayPal. Our ID through PayPal is [email protected] For U.S. residents, donations are tax deductible.

I’ll keep everyone posted about how these dogs fare in the transition to their new homes.

Hi @rhondak I’ve upvoted and resteemed this post and will do my best to spread it around.

Aside from the obvious value of what you write about, this has been the best thing I’ve read all day for a very personal reason.

Outside of Steemit I’m a foster carer for neglected/abused children. We have a 5 year old autistic boy staying with us at the moment and today has been a really tough day. It’s not little CJ who is the problem though, although he does have his challenges, but dealing with the beauracracy that’s comes hand in hand with the job.

We are trying really hard to do the best we can for this little boy, but the public servants and the social workers and pretty much everything seems to be aligned against us. It’s gotten exhausting. Tonight I’ve been questioning whether I have the strength to keep going and whether I’ve got the temperament and energy to keep fighting the fights that need to be fought for him. To put it bluntly I was ready to throw in the towel.

Reading your post and seeing the challenges you deal with to help these beautiful animals has given me the strength to try again tomorrow. That sounds a bit cliched but this post was exactly what I needed to read.

Oh my gosh. And the cycle continues, because reading your comment gives me the strength to keep going. THANK YOU. And may the road ahead of you be paved with success, for you and for little CJ.

This is the type of post I want to see with huge upvotes. Can we make that happen please? Can some whales please come along and upvote this and donate more to the official rescue page @tarc. Keep fighting the good fight @rhondak. I am amazed you do this, and edit papers @thewritersblock. You are a champion!

Thank you, @andrewking. Yeah, I'd love to see some big uptics on this one, too. Not just for the payout, but as a showing of force for the great things Steem can help accomplish.

Drop in and say Hi at the Block from time to time. :-) I'm not always there these days, but hope to get back to a point soon where I can be.

Oh my gosh, that is awful! You are so amazing and sweet and caring and these people are knuckle heads. You're doing a fantastic thing. Tell that "Mountain Mafia" off gurl!!
The pups are adorableee. It's crazy the way anyone could treat God's creations that way.

The attitude of the women is really saddening, rather than focusing on the real problem, they are talking about anything to pick a fight.
I hope that steemians award your faith in them and your friends find a new home

You nailed it. They just want to fuss and carry on. Not a bit interested in the real problem. Sad.

I'll increase my weekly donation for as long as I can. It's not much, but it's what I can do to help. Wish we lived a bit closer.

Bless you, Jon. You are a saint.

Got the first vet bill from this fiasco today, for two of the dogs. $538. I almost died.

Thanks a lot for sharing your valuable post....
Carry on next
Best of luck..
I will still wait for your next post....

Upvoted. Sadly Candy does not appeal to my husband, even if she has potential for my needs. sigh But I know your contacts will find them loving homes if we can just get you the funding to care for them.