Nature offers a vast diversity of living thing; plants and animals inclusive but many of these creatures have gone extinct due to environmental factors as well as human activities in their natural habit. Some of these extinct creatures were quite defenseless but this attribute didn't help save their existence. At the moment, laws are being enforced in some countries protecting animals faced with threats from poachers or even the change in their environment due to climate changes. Below is a list of animals that are no longer existing. 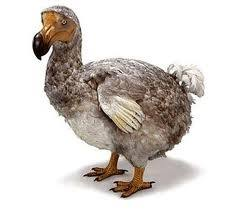 The dodo bird is an extinct flightless bird which was native to the Island of Mauritius, east of Madagascar in the Indian ocean. It was said to be fearless of humans and it is believed to have been eaten to extinction by Dutch sailors who found out how easy it was to catch them. Also known as the Tasmanian Tiger, the thylacine was the largest known carnivorous marsupial of modern times. The last of its kind died in Hobart zoo in 1936.

This was another flightless bird that became extinct in the mid 19th century and was a native to the North Atlantic. They were utterly defenseless and became game for rapacious hunters. The last known specimens were killed in June 1844 at Eldey island, Iceland.

In the 1800s, the passenger pigeon inhabited eastern North America and due to its habit of migrating from one place to another, this extinct species of pigeon was generally believed to have been hunted to extinction by man and its last known representative died in a zoo in Cincinnati (Ohio) in september 1914.

Thanks for your audience, kindly make your contributions, they are welcomed.