A car drove into my house. No one hurt.

My life just got tossed into the Murphy's sh!t can.

A real car just drove half way into my basement. No joke. No bs. Dude lost control and tried to park his car in my basement.

Damage is a big hole through the cinderblock basement/foundation wall.

Lots of belongings and stored things were ruffled and or destroyed by the flying cinderblocks.

It just happened, and I am in shock. So I dont even know what all has been damaged.

we have home owners insurance. No one was hurt. As far as we know at the moment....no key structural damage was done. But too early to be sure. So, all things considered.....it's not as bad as it could have been....by far.

But this is going to cost me thousands... maybe more on some upcoming work that is going to have to be rescheduled....or something. idk. Fml.

I am so thankful right now that it isnt worse. But I know the next week of my life is going to be hell. And I had lots of cool stuff coming for you guys, but now....I'm just not sure what I'll get posted or what....

Wow. What a day. Let's have a fundraiser.

Good idea @mineopoly!
I'll chip in!!! I only have peanuts, but a bunch of peanuts will probably add up!!
<3

I'll do standup comedy and sell tickets. Or I'll petition congress for common sense assault car legislation. Or that is my comedy show. roflmao but not lol :-|

ㅠㅠ Glad the kids are okay. You are always welcome on @comedyopenmic. A video of the clown who drove through your basement can be a winner. My prayers are with yo guys.

@em3, my sympathy and support is here for you man!

That is just crazy. I'm glad to hear no one is injured. I can't imagine how stressful this may be. I know it won't be much, but I am sending over all my liquid Steem(SBD) just to try and help a little that you don't have to think about or be worrying about the money right now. Let me know what more I can do. I wish there was more. But keep us updated and we will do all we can!!!

@public-eye thanks so much! You really didnt have to do that. We arent going to go under from this, as long as insurance comes through.... I just have to figure out how to make everything work with the Montana work.

Anyway, it really means a lot to have everyone's support and encouragment! Thank you!

Glad you're all OK, but this requires some photos! If anybody did that in my old basement, they would have driven themselves into their grave. I'm just guessing the basement isn't so deep. Take care and we'll rally round some upvotes to help with repairs.

Upvoted and has been added to the latest MAP Upvotes post. 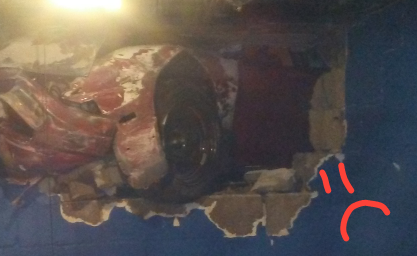 I really didnt take many. The police and city inspector did. But I'll put up a few if I get a follow up post done on this.

Thanks for the support!!

That is just crazy! No one ever thinks... hey, what if a car drives into my house today.

I'm glad you are okay!

A look at the outside. It got all boarded up lastnight before the city inspector left.

The car was a small car and lower to the ground. If it had been an suv or pickup it would have hit the side wall and done major damage. As it was it mainly just hit block and looks minor now from the outside..... Sorta.

Oh @em3,
I am so sorry to read about this! I am super glad that you and everyone is alright! What a shocker and just craziness! I know you are frustrated and stressed right now, just know that you have friends here that care about you and 'this too shall pass'!

God's blessings and care be with you!

I just sent a few peanuts to help out or at least send a little token support! Let us know if we can help!

Hope you have a better week! <3

I thought it only happened on TV. That is insane.

Isn't it funny how we look on the bright side of these things and end up looking at how much worse it could be. Self protection mechanism maybe. My daughter (learner driver) just put my car in the shop. I'm just thankful:

Hope things get put back together okay for you.

Yeah, we gotta look on the brightside....otherwise things get too much. And honestly, in some patch of earth or concrete somewhere on this big blue planet, there is always gonna be someone that has it much much worse. So that is good to keep in perspective to.

This is fixable. Rape, starvation, disease, natural disasters......not so much. But dang it sure feels like this sux to me right now. I really didnt want to get out of bed this morning. :-/

Wow its good no one was hurt !! Hopefully the driver had insurance so you don't have to take the hit on yours !!!! Good luck !!!!

Yeah, exactly. I dont even know yet about the guys insurance. I guess it will be on the police report.

Oh no! I hope everyone is doing better. My dad is asking if your house is in a corner street?

We have neighbors who drive too fast here I wish we have longer driveway and not too close to the street.

Owww! I'm so sorry this happened :( Maybe we should also pitch in on a sign for you: "No Parking Allowed!"

Haaaaha! Awww, I needed a good laugh! Thanks!!

I don't think it would have helped... But yes, it's no fun when people think your house is the Sonic drive in! :-D

You mean you didn’t serve them burger and fries after their drive-in? 😂

Yeah TGIF cos no one's hurt. Stay safe and kicking

Not every day you get a car driving into your home. Glad everyone is ok.
@ironshield

Holy Crap!!! What a mess!
So glad no one in the house was hurt... I couldn't believe what I was reading when you messaged me earlier

Trust me... I still dont think it has FULLY sunk in.

Good grief! Thank goodness no one was hurt and the damage not worse... Hope all got worked out fine... :(

Just saw the picture below (or above after this gets posted...) That's quite a large hole in the house... 😮

But the hole is covered...so I guess we are fine for now. Juat cant wait until it is done.

Thanks for stopping by!!