When I started collecting Yu-Gi-Oh! Cards I had a heck of a time trying to find out which cards had the best value, and which weren't worth the paper they were printed on. Was it how powerful the card? How Rare it is? What's the difference between… 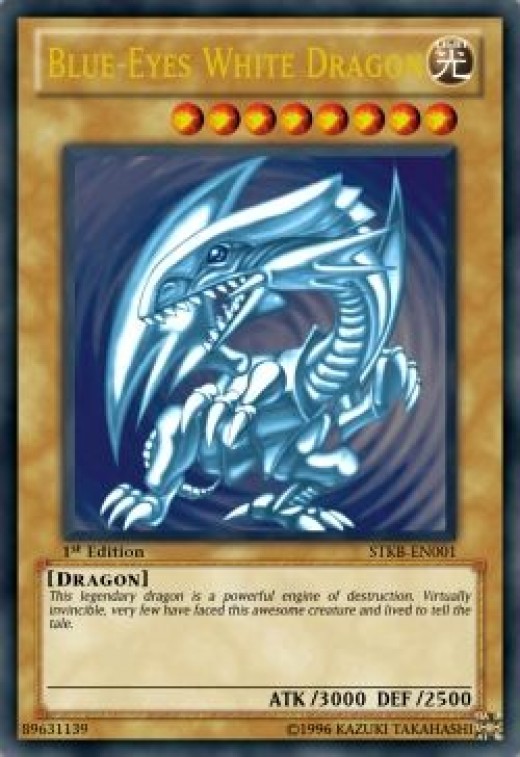 (Blue-Eyes White Dragon is probably the most well known Yu-Gi-Oh! card and coupled with rarity can be very expensive to this day)

It took me time, energy, and Money to find out all these things. So hopefully I can share some things I've learned about Yu-Gi-Oh! Card collecting to help you, so you don't have to make the same mistakes I did, when I started.

How to tell which cards are rare, and which are not.

Here is a rundown on how rare a card is. The more rare, the more its worth.

Normal Rares are identical to Commons, except they are slightly harder to find. Comparable to the now-discontinued TCG Short Print and Super Short Print rarities, Normal Rares only exist in the OCG.

Short Prints are identical to Commons, except they are slightly harder to find. This only existed in the TCG, and were discontinued after Ancient Sanctuary, but have since been re-introduced in the TCG in Phantom Darkness.

Super Short Print's are identical to Commons and Short Prints, except they are much harder to find. They only existed in the TCG, and were discontinued after Ancient Sanctuary.

Rares are used for early Game Boy Promos. They are akin to Super Rares, but have a coating very similar to Parallel Common cards. However, this coating has none of the consistent layout and texture of the usual Parallel coating.

A Super Rare card is identified by having a black or white card name and the image is a holofoil. More recent video game promo cards have been Super Rares. Currently there is a 1:5 chance of getting one in a booster pack.

An Ultimate Rare card has an "embossed" foil on the Card Artwork, including the borders of artworks, Attribute icon, and on Monster Cards, the Level Stars. The card name is printed gold, like an Ultra Rare. When scanned, the embossed image may be muted and the image indistinct from the background. This card rarity is very hard for Scalers to find, since the card is much thinner than a normal Super Rare or Ultra Rare, with a weight comparable to that of to a Common. Ultimate Rare cards usually also come in a less rare variety that can be found in the same booster with the same card number.

OCG Ultimate Rares tend to scan much better than their TCG counterparts, due to a slightly reflective coating present on all OCG cards (but lacking on TCG cards). This has the advantage of brightening the image, and making the foil image more distinct than on a TCG equivalent. In the OCG, Ultimate Rares have been known to be printed as independent rarities, while they are used exclusively as an additional Booster Pack rarity in the TCG.

On the internet market, Ultimate Rare Cards are often much more valuable than others, even if their effectiveness in the game is only above average. Ghost Rare is a fairly recent rarity introduced in the TCG version of Tactical Evolution. It appears to have a very shiny silver lettering, much like a Secret Rare, with some colors removed from the card image. The overall effect of these changes is a pale, "Ghost-like" appearance to the card art, especially when scanned. There are only 6 Ghost Rare TCG Cards: Rainbow Dragon, Elemental Hero Chaos Neos, Rainbow Neos, Honest, Stardust Dragon and Black Rose Dragon, which each represent alternative foil patterns for a single secret rare card in their respective sets. This is the TCG version of Holographic Rare. The odds of obtaining a ghost rare in a box of 24 booster packs stands at approximately 1 in 36.

Holographic Rare is a fairly recent rarity introduced in the OCG version of Tactical Evolution. It appears to have silver lettering like a Secret Rare Card, with many colors removed from the card image, while the entire card appears to be holographic. Currently, there are six Holographic Rare cards: Rainbow Dragon, Rainbow Neos, Elemental Hero Chaos Neos, Stardust Dragon, Honest and Black Rose Dragon. This is the OCG version of Ghost Rare.

The angle of the card changes the reflected colour, just like a hologram.

A Secret Rare card is identified by having a silver card name and the image has a unique holofoil known as a parallel holofoil (named due to the parallel dot effect on the image). In sets that are older than Tactical Evolution, secret Rares are all either the first (#000) or last cards in a set.

Secret Rares were at first discontinued due to excessive use of electronic scales, however, they have been re-introduced in Strike of Neos. Currently, the odds of getting a Secret Rare in a Booster Pack is 1:24.

An ultra Secret Rare has the Ultra Rare foil over the image, but has the sparkly silver card name like a Secret Rare. There are very few of these cards; only one currently exists in English (the GSE version of "Elemental Hero Wildheart"), with the remaining ten in Japanese.

An Secret Ultra Rare has the Secret Rare foil over the image, but has the Gold card name like a Ultra Rare.

The only image known for this type of rarity, is an apparently misprinted version of "Gaia the Dragon Champion" in the original Legend of Blue Eyes White Dragon booster pack.

Parallel Rare is a generic term, used to refer to cards where the entire card surface is holographic (that shows up as an even "haze" on most scans). There are four types of Parallel Rare:

A Rare Parallel Rare is a theoretical rarity that has all the characteristics of a Rare card (ie. no foil image and a silver card name) but has a coating which makes the whole surface reflect. The coating tends to stiffen the card and when scanned the coating creates a uniform haze on the card.

A Rare Parallel Rare is a theoretical rarity that has all the characteristics of a Rare card (ie. no foil image and a silver card name) but has a coating which makes the whole surface reflect. The coating tends to stiffen the card and when scanned the coating creates a uniform haze on the card.

(Sorry about the image quality its hard to scan or take a photo were the card shows the effects online.) 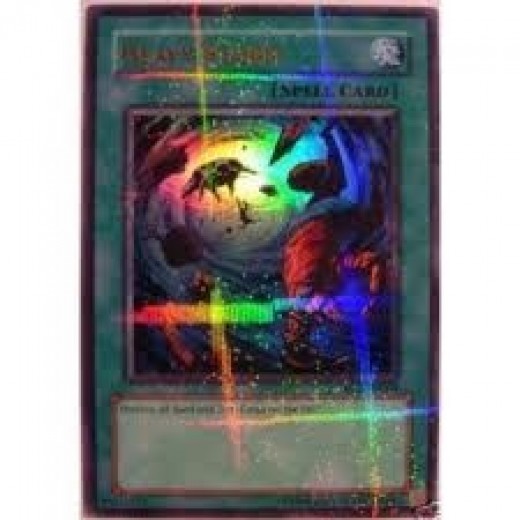 A Super Parallel Rare has all the characteristics of a Super Rare (ie. foil image and a black card name) but has a coating which makes the whole surface reflect. The coating tends to stiffen the card and when scanned the coating creates a uniform haze on the card.

An Ultra Parallel Rare has a gold card title like Ultra Rares, but also has a coating across the surface to make the whole card reflect. The coating tends to stiffen the card and when scanned the coating creates a uniform haze on the card.

Gold Ultra Rare is a new type of rarity introduced in the Gold Series. It has gold lettering and a holographic foil image like an Ultra Rare, but also has a holographic gold image border, lore text border, and card border. On Monster Cards, the Level Stars are embossed in gold foil, similar to what is found on Ultimate Rares.

Variables that affect the market value of your cards

Not really rarity but it falls under that sphere.

Yu-Gi-Oh! TCG tournaments use Advanced Rules. Those rules change the dynamics if not in the rarity of the cards, but how their value can be affected. So say if a card is ruled Unlimited, no worries, doesn't harm the price of the card. However, if a card is suddenly banned, then you had better sell those cards before everyone finds out and the price plummets. Lets run down how this TCG's rules evaluate cards for tournament play, and how it affects sales of said cards.

Just because you can't use it in the advanced rules tournament doesn't mean you cannot use it with your friends or even friendly tournaments. Heck maybe you just want it because you like the artwork. I am only suggesting that when cards are ruled to be banned, limited, or semi-limited, it affects the market value of the card.

I hope this information will help you in you card collecting or even if you just find some old Yu-Gi-Oh! cards at a garage sale and want to see if they are worth anything.

This is by far the most confusing part of collecting / selling Yu-Gi-Oh! It took me a long time to ure out all these different rarities. Another thing about Yu-Gi-Oh! that turns off new players is that most spells/traps/effect cards have huge text boxes with complex rules and weird translated wording. I wish the rules were a little more straight forward and simple.