One of the most helpful tools I've discovered for trading is The Wyckoff Method, created by Richard Demille Wyckoff, a pioneer in the studies of technical analysis, and one of the five "titans" of TA, along-side Gann (Gann Fans/Squares), Dow (Dow Theory), Merrill, and Elliot (Elliot Wave Theory). Below is a summation of what I've gathered and factored into my trading.

Five step approach to the market.

-Determine the present position and probable trend of the future.
Is the market consolidating or is it trending? Does analysis of supply and demand
indicate the likely direction of the market in the future?

-Select stocks (read: crypto) in harmony with the trend.
In an uptrend, select stocks that are stronger than the market,
with greater percentage increase during rallies, and smaller decreases during reactions.
In a downtrend, do the inverse.

-Select stocks with a cause that exceeds your minimum target.
A critical part of Wyckoff's trade selection and management was his method of identifying
price targets using point and figure projections for long and short positions.

-Determine the stocks readiness to move.
Apply the nine tests for buying. For instance, in a trading range after a prolonged rally,
does the evidence support that significant supply is entering the market, and that
a short position may be warranted? Or in an apparent accumulation range, do the
nine buying tests indicate that supply has been successfully absorbed, as evidenced
by a low volume spring and an even lower volume test of that spring?

-Time your commitment with a turn in the market.
Three quarters or move of individual issues move in harmony with the general market.

A heuristic device to help understand price movements in individual stocks
and the market as a whole.

"...all fluctuations in the market should be viewed, and studied,
as well as those in various stocks, as if they were the results of the actions of
one mans operations. Let us call him the composite man, who in theory,
sits behind the scenes and manipulates the stocks to your disadvantage if you
do not understand the game as he plays it, and to your great profit if you do."

Wyckoff advised retailers to try and play the game as the composite man played it.

Wyckoff taught that:
-The composite man carefully plans, executes and concludes his campaign.

-The composite man attracts the public to buy a stock,
in which he has already acquired a sizeable line of shares,
by making many transactions involving a large number of shares,
in effect advertising his stock, by creating the appearance of a broad market.
One must study individual stock charts with the purpose of judging,
the behavior of the stock and the motives of the large operators who dominate it.

-According to Wyckoff, the market can be understood and anticipated
through detailed analysis of supply and demand, which can be ascertained
from studying price action, volume and time. As a broker, he was able
to observe the activities of highly successful individuals and groups who
dominated specific issues, and was able to decipher the future intent of
those large interests. An idealized schematic has been depicted below.

I must say, this schematic, others like it, and the application of it to various charts,
has been a godsend in trading, and allows me to make some quick yes or no decisions about
whether or not I even want to continue charting a coin and look for an entry. 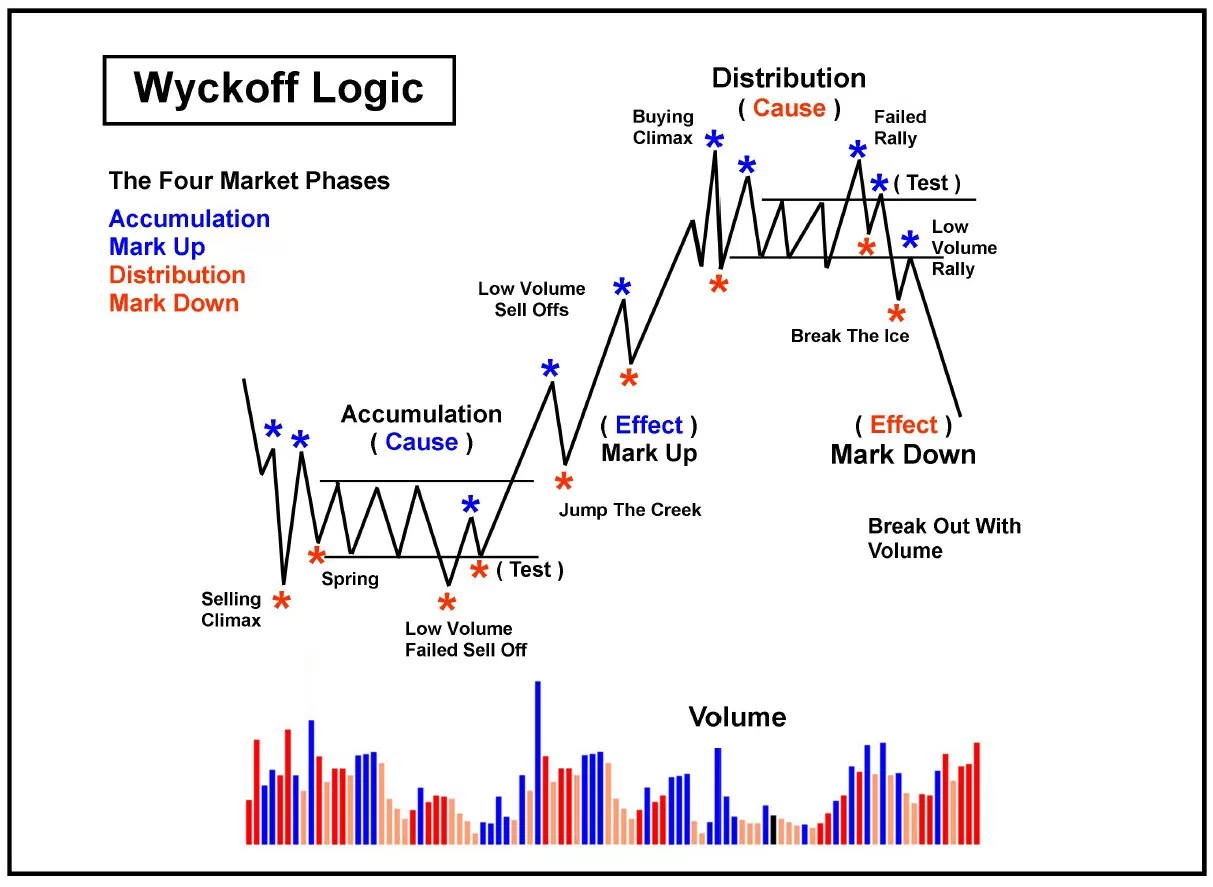 Wyckoff’s methodology rests on three fundamental “laws,” which affect many aspects of analysis, including: determining the market’s and individual stocks’ current/potential future directional bias, selecting the best stocks to long or short, identifying the readiness of a stock to move, and projecting price targets in a trend from a stock’s behavior in a trading range. These laws inform the analysis of every chart and the selection of every stock to trade.

I'll conclude this here, as there's a lot of information to be absorbed.

Stay tuned for the next installment, and more.

This seems to be a direct copy and paste of this article: http://stockcharts.com/school/doku.php?id=chart_school:market_analysis:the_wyckoff_method