Wildcats crazy for the moon

It was a very large extraordinary staring back at me from out of the bushes of the night as 4a.m. while cats cried Alex and Marge from the alleyway outside, all very pellucid.
The styrene sylph lay beside me, sworn to secrecy hours ago, her golden hair spread about the pillow in streams like her dreaming, 8 yards high in the little garret. Lucky I guess.
The established divine in the limited expansion gap had branded us heretics in our madness for singing and dancing at midnight. And they burnt our book: 'Buddha was a stroke of genius,' called it an alternative learning that was banned. We danced anyway. Until they came for us. 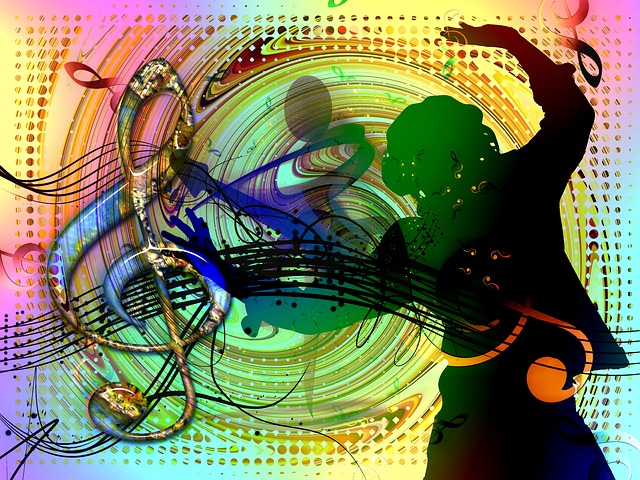 So we changed our names and ran for the border, but they used the hounds from hell to track us all the way to the changeless border that came at us like an express train to freedom, so we passed over and left the baying behind.
“Dogs are unclean in this place, and only slaves are allowed here,” they said in the new place.
We agreed wholeheartedly, to be free slaves and welcomed.
They'll be calling for prayers soon, 5 times a day, but first I must go down to the bakers where they have assigned me to begin work, and Marge has to stay in, she's not allowed out without me to accompany her, and then only if she covers up from head to toe with only her eyes showing.
She wants to leave this country, as do I, but where? To the east, where we came from are the Christians, and they would have us crucified. To the south is the Krishna Island, but they don't let anyone in anymore. To the north are the heathens, barbarians all, ready to kill you to death for no reason at all. And to the west is the barren land. It used to be full of Buddhists, but they wouldn't fight and so got slaughtered by all the other religions that fought over their land until it was of no use to anyone anymore. There was nothing there for us; except a rumour, that far into the barren place, to a range of mountains in the north, there was a temple stronghold, that no one could assail, and few could find. If only.
We made up our minds to take flight again. The best time to run would be at night, when everyone retired, and the wild cats came out to cry. The noise would cover our escape. 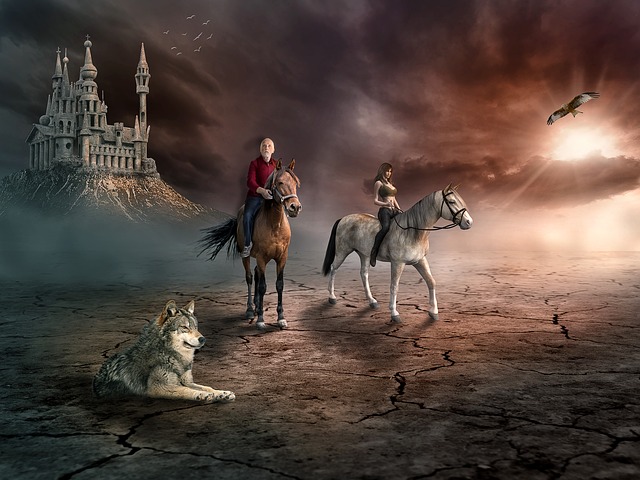 Three weeks later and we can see the mountains. Will there be anyone there? Too far to see yet.
We've come to an abandoned city by a huge expanse of water. We can't see across it to the other side.
Zen decides to use her real name and takes a room in an empty hotel. She is glad to rest. I keep the name Alex for now, but change back into my man clothes. I feel restless and so go off to explore.
In another forsaken place I come to I meet a bunch of lads in a boat without a captain. So I climb in the boat and say:
“What's up lads?”
They all look at me and without exception I fall in pity for each one of them, their eyes so sad and forlorn.
“Ok lads, we're going treasure hunting,” I say.
They all perk up at this and one says to me:
“Which way cap'n?”
I was happy, and thinking all is well with the world, and so said to them:
“South to forever.”
And then we were off. I left Zen in her hotel room far behind. She was ok in her mission to the mountains, and I'd had enough of trudging through the desert, and I was never really into Buddhism that much anyway, not like Zen who did it everywhere. Well now she could go Zen walking as she pleased, and good luck to her, and maybe she'll take her demons. “Right lads, anyone got a compass?”
They all look at me nonplussed. A little mermaid popped her head out of the water and says”
“CQ calling, CQ calling, come in please.”
“Hey!” I say.
“Hey you,” she says back to me.
“What you doing?” I ask.
“I heard you call for a compass,” she says.
“Wow, that's quick. You have a compass then?”
“I'll be your compass,” she says.
“Ok,” I say back to her as she swims water and smiles at me.
“Where do you want to go to?” she asks, still smiling.
We want to go treasure hunting.”
“Follow me,” she says and swims off making a silver path through the water for us to follow.
“CQ, over and out,” she says.
I have no idea why she says that, or why she is carrying a wireless with her, but maybe time will tell.
The sun started to set red and beautiful as it fell into the sea and we all pulled on the oars towards it on our quest for treasure and adventure. 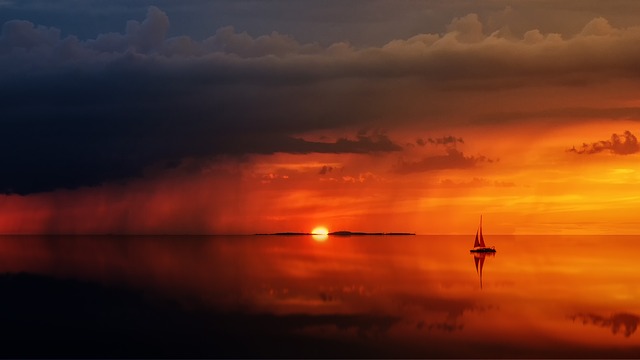 Back in the hotel in a place of hidden hearing, the secret rustlings of the conspirators, all men, could not be heard, and they didn't smile much in their seriousness either. Notes were passed furtively, and burnt after being read. The cold draft of contempt iced the walls and froze the coffee.
The room was in a part of the hotel that no one went to, in the east wing. It had no windows and only one door that was locked, that opened out onto a dark alleyway where shapes waited in doorways.
All stopped as a dog came to sniff outside the door, but found no interest there and so went on its way. The sound of a gull's lonely cry found a crack and got through, but dropped dead at the feet of the doom machine that had been built and now stood counting death-rays and silent thunder under the conspirators long pointed, dripping noses.
All froze as the secret knock came from the door as a scratching that penetrated 3 feet into the room then fell in shards onto the cold stone floor. Nobody said a word, for no moment was exactly alike any other that came then except in the fear that would stop their very hearts from beating. This palpable fear amophosed into a skulking mist that ghosted to the door, taking the fallen shards from the floor to use as a key to open the door a crack to see who was there. But all knew who was there. It was the deathless executioner, the queen of despair, the wicked witch of whispers. Darkness flowed into the room. She had come in her greatest disguise. The door slammed shut, a blip in the night.
More notes were passed and burnt as the darkness settled in around them.
“Who here would betray me?” asked the darkness.
“Not I,” came the silent and fearful reply from the quickly beating hearts present.
The cold darkness ate into them all and found no warmth, and so was satisfied.
“A feast has come to my domain, and sleeps now in one of the rooms. Go, bring her to me,” commanded the darkness.
With their heads bowed, the conspirators left through a crack as big as doubt, a secret passageway only they knew.
They crept into Zen's dreams and lay about them binding up all her joys until only fear was left.
And so bound, Zen was taken to the Queen of darkness, in that room where hope had no place to thrive.
Quaking and shivering, the cold invading to her very marrow, Zen faced the rabid darkness, her deepest fear with a doubt that grew inside her. 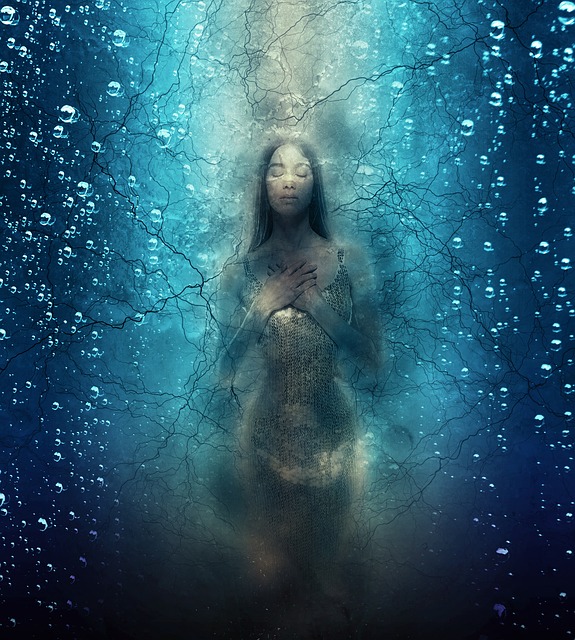 The darkness knew to be silent, as her henchmen surrounded Zen. Zen's own fear would be her downfall.
A fist of despair began to close around Zen's warm beating heart. Her mind striving for a way out, but the thumbscrew of misdirection kept the doors firmly shut.
The 7 henchmen of the darkness battling with her greatest strengths, used ennui against her anger; self pity against her confidence; despair against her hope; depression against her joie de vivre; darkness against her light; ignorance against her clarity; and hate against her love.
The small flickering flame in her heart fought back out of sheer cussedness. The flaming arrow of her fighting spirit and, I'm bigger than this small grave arose from her soul and caused the 7 henchmen to draw back in fright.
“Stand firm you fools,” shouted the darkness. But it was too late.
With her rebel yell resonating to strike panic into her attackers, Zen screamed her way out of there, and woke up in her bedroll, panting, yet strangely joyous, and fully awake.