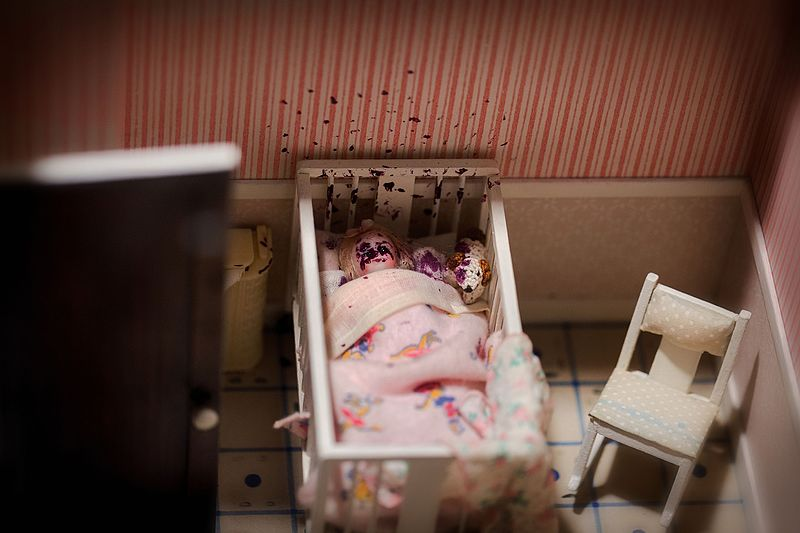 Credit: Wikimedia
If you are a fan of Chinua Achebe then, it is my pleasure to be your pilot for the next five minutes.
In things fall apart OBIERIKA was a man who thought about things. When the will of the goddess had been done, (after Okonkwo was sent into exile for seven years) he sat down in his obi and mourned his friend's (Okonkwo) calamity. Why should a man suffer so grievously for an offence he had committed inadvertently? He remembered his wife's twin children, whom he had thrown away. Take Note: He remembered his WIFE'S, twin. Obierika was still married to the mother of the twins he threw away.

I can still remember vividly the first time I saw an electric clipper. It was around 1995. Before then, cutting of hair was done with manual clippers. Hello kids, we had manual clippers Those days, barbers moved from house to house to cut people's hair(sorry my dad will always insist we cut our hair because braiding it was war for us, if you understand what I mean) There was a barber that usually visited our compound: a fair tall man that had the kind of long bicycle called 'Long John' in those days his name was Godwin but we call him Goddy.

He held my head and advanced the equipment towards me, all I saw was a devil with ten horns, I strained my eyes to have a better view and only then did I discover it was a chainsaw heading towards my head. My head would be cut off, I thought. Goddy's left hand held my head, and the clipper was shaking viciously on the right hand. The clipper was very close to me when I slipped from his grip and escaped to save my head. *Because I conceived that the electric clipper was harmful - It didn't make sense to me and I wouldn't reason or negotiate my head with anybody - my priority was my safety. My Father was there and would never permit me to come to harm's way, but my head was too precious to me that I wouldn't take a chance. For no good reason, I conjured in my mind that the electric clipper would chop off my head and I acted on impulse.

Back to the point I am about to make, That was the case of our African forefathers and the myth of the killing of twins. To set the record straight, OUR FOREFATHERS NEVER KILLED BABIES. Spilling of the blood of the innocent was a hideous crime from time immemorial in Africa. Murder was the worst taboo and whoever murdered another person - for no justifiable cause - was killed. If one killed another inadvertently - manslaughter: translated as 'igbu ochu' in Igbo, you would flee from the clan for seven good years. (Just like Okonkwo in Things fall Apart) There was no appeal to these laws.

Our fathers were with no sin, when their wives delivered twins, they took the twins to the forest and abandoned them there. The abandonment was not out of wickedness, or malice, or because they delighted in the death of their own children. No, they were not savage beings. There was a reason to that which I would explain. (I won't censor the fact that Great Men and Priests of the land were buried with their servants or human heads. it was borne out of the belief of Life After Death. A topic for another day

Why then did our fathers abandon their twins in the olden days?

At the time of ignorance, God overlooked. (Acts 17: 30) I doubt if you have this in your bible too. Abandonment of twins was NEVER A CUSTOM anywhere in Africa. Most of the customs of Africa were not affected or wiped out by civilization. NO! strange doctrines could not corrupt it. The new yam festival, source wikipedia CCO images
Take Eastern Nigeria for instance: (I am Igbo and I stand a better chance discussing my own folks) some of the major customs of every clan in Igbo Land are the caste system called 'Oru' or 'Osu'; celebrating of New yam festivals; taking Ozo title with an oath that you - living or dead - belong only to the Traditionalists e.t.c. The keeper of these customs is called 'Onye Uwa' - which in a bias and wicked manner was translated to 'a pagan' (the right translation is a Traditionalist).

There are a lot of customs in Igbo land, anyways, but abandoning twins was never one of them.
ABANDONING TWINS WAS A MERE BELIEF. (Remember, A belief is an acceptance that something exists without a proof) Our fathers believed that every pregnancy should result in a child, so when twins were born, they assumed/ believed that one of the twins was fathered by an evil spirit. Unable to determine which twin was fathered by the evil spirit, they abandoned both so to avoid the wrath of the evil spirits. (check it up on Wikipedia: Mary Slessor's Missionary Work) This means that if there was a way to know which of the twin was fathered by the evil spirit, they would save their own child, but there was no way. Poor ignorant folks; they didn't want to take chances, they submitted to their fright for the wrath of savage spirits. With heartbreaks, our fathers abandoned their own twin children because they lacked wisdom. Like I said earlier, the customs of Igbo land were not corrupted even till this day.

Though it's presently not very popular, yet, every traditionalist (Onye Uwa) still avoids 'Oru' or 'Osu'; he would never eat new yam anywhere until he celebrates the festival in his own home; and till today, a real 'Onye Uwa' is buried by traditionalists and traditionalists alone. His/her corpse would never enter any church - No! his/her fellow traditionalists would never ever allow that. This is custom - still undefiled. But after the Africans understood that there was no second evil father in multiple births, the Traditionalists till this day bless people in Igbo land with these words: 'Nwunye gi ga amu ejima. (Your wife will give birth to twins).' To this blessings, even the core Traditionalists answers - 'Isee' (Amen).

It is so because the 'Twin Myth' was a belief - NOT A Culture nor custom. Yes, it was never a tradition or a norm. Back to my Barber's story Goddy called me back and assured me that nothing would happen to me. 'The electric clipper would cut my head,' I said in fear, I was very sure. 'It would not,' the poor man exclaimed. But I wouldn't listen to him. He dragged me to the stool, I struggled, making it impossible for him to carve my head. 'It doesn't hurt,' he softly told me. He brushed the electric clipper over his skin and directly on his face. 'See,' he continued, 'there is nothing to be afraid of. Seeing the electric clipper moving over his face without cutting it off, I jettisoned my initial BELIEF and permitted him to use the electric clipper on me.

Sorry, missionaries only had to prove to our forefathers that there was no evil father and that was it, twins were saved.
But none should tell me that African tradition, custom involved the killing of twins.
For those with shallow mentality I suggest you read more about tradition and belief.
Act 17:30

Twins were always taken to the forest where they were usually saved and taken to nearby villages.
Nice one @prettyprecy

This is awesome.
But Africans killed babies anyway 👍

Awesome storytelling. Thanks for offering that perspective.