Diary of a sad clown: The first show

pattymayonnaise (28)in #writing • 4 years ago

My first show was a blur, I wanted it so bad I was willing to do anything, even down a whole bottle of whiskey and stumble on a stage to make an ass of myself. I was so depressed that day, I was sitting in my room all day mindlessly staring at my phone, so I decided to make a change, and walked down the street to buy the bottle. I felt like I needed anything, even if it was humiliating. It gave me a sense of something I couldn’t let go of, even if I didn’t try again for over a year.
The week before my best friend came over, he was dead eyed and full of Xanax. I took the bottle away from his belligerent, lifeless body, and I told him never to come back if he was going to be this way. It was hard for me, I watched his demise happen slowly while we were in college. He started out hopeful and ended up letting the darkness take him one day at time. I wouldn’t paint a picture that he was at the top of his game when we met at a burrito commercial in Myrtle beach, South Carolina. We were promised free food and booze if we participated, and if you are broke in college this is an exciting deal. We drank together all day, sobered up on the beach and he put his arm around me, I told him not to make this weird. 72 hours of non-stop hanging out later he was being carried out of my dorm in a stretcher, having a seizer. My parents and I referred to him as seizer boy, and one day he yelled, “I AM SEIZER MAN,” to a western union associate who asked him a what the password was as I was on the phone laughing telling him he had to say it.

He found ways to cover himself in a blanket of despair, and wrap it even tighter while wedging himself into a whole that in his mind could only go deeper. He would get drunk to hide his anxiety, high to run from the pain, but he would laugh to create a mask that eventually only I could take off. I was no angel, but I was the only one wings he could hold onto after it become to much for him to face.
A few days later he came back, after a 16 hour drive (eight hours to South Carolina and eight hours back to Baltimore) he had allot of time to think. He said he was sorry, he knew how much the dead eyes bothered me after seeing so many people close to me look that way. We had deep conversations about the universe, talked through his suicidal thoughts, and I convinced him in our own funny language that life was worth living. I even went as far as to tell him that if he really wanted to do it, he should get a flight or bus ticket to anywhere he wanted to go, and then if it didn’t work out he could have at it. I know I didn’t mean it, I imagined myself paying his return ticket if he couldn’t hack it. But I really thought he’d give life a whole new meaning if he ventured out of his comfort zone to do something he always wanted.

We spent the whole next day eating dumplings and binge watching Narcos. It was wonderful, I curled up next to him and his dog and thought about how much I loved my friend. I took this picture of him that day, he looked so happy. Somewhere in between my new found bliss and Ryan’s stupid big smile, I forgot it was cold outside, I forgot that he ever had a problem, and I remembered that there was hope everywhere. Maybe in the moment those weren’t my exact thoughts, but when I look back I think of it that way. 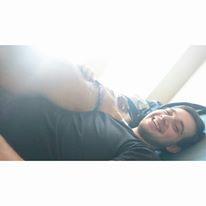 The day after he drove home, in his green basically broken down car that I walked him to, his dog in the front seat happy as could be.

The following day he wrote me a cry for help, and tried to call, I was taking dab hits and doing yoga in my kitchen. I didn’t deliberately try to ignore it, but when I called back there was no answer. His mom started blowing up my phone, I didn’t answer because I was too high to hear about how she wishes she could help her son and ask me how the visit went. When I called back the next day she told me he put a gun in his mouth and pulled the trigger. I laid in bed for a few days, went out to buy a bottle, then went to a my first open mic where I slurred some words about a recent gynecologist visit and no one said a word, not even to make fun of me. I still use that story in my set, ironically it is now one of my best jokes.