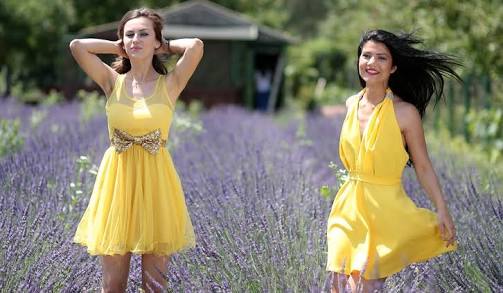 "He's so cute. You need to see the way his eyes crinkle and his nose kind of scrunches up when he laughs".
I overheard Charlotte telling someone, while in shower. I tiptoed closer and hid behind the bathroom door to eavesdrop. I had thought she's gotten another boyfriend she didn't tell me about.

"Yeah, the house is big and fine and she's got a pink room. Such a childish and cliché stuff" She chuckled.

I went numb and cold hurt. I knew Charlotte was talking about me, but to who?
It reminded me of how she's talked to her ex-boyfriend about me. I had gone to see her in one of her friend's house last year and her boyfriend called her. At a point, they started talking about me because she thought I was still sleeping and wouldn't hear. She told her boyfriend I was fat and lazy and I was sleeping like a fat cow and they both laughed about it. I felt so bad because I would never do that to her. Few months after that, she called to say they've broken up.

"Hey you good?" She asked as she dried her body in the room.

Water dripped from her wet hair to the floor and I wondered how she couldn't just dry herself in the bathroom before stepping out. I contemplated on whether to tell her to dry off the water when she's done or to answer her question. I didn't wanna fight because I remember she once told me no one breathes around me when I complained about her not putting the curtain linen properly which could make it tear.

"Hmm Amelia" She said while she played Drake's One Dance and whistled along. She's been playing the song ever since she arrived especially when she's taking a dump.

So many thoughts ran through my head but I felt they weren't enough to judge our friendship.

"Charlotte have you heard from Paige?" I asked.
"The last time I checked, she was your best friend, not mine" She retorted.
"Oh really, Adley showed me some R.I.P posts on her wall"
"Adley knows her now?" She sounded jealous
"Not personally, they are just Facebook friends" I defended.

Charlotte had never showed she liked my brother. When Adley came to say hi to her the previous night, she had acted like she didn't care even though I knew she loves cute guys and Adley was a god. She had refused to give him a hug, and bluntly told him she doesn't hug boys.

"When did this happen?" she asked in her most disinteresting manner, while putting on her lip balm,
"Last month" I replied.
"She had an accident and she got into a coma, I don't know if she's ok now. Lauren told me and I thought you knew". She put the balm back in her makeup bag and zipped it.

Lauren was known as Miss Parrot in my class, as she was always the first to share News about anyone so I wasn't surprised how she knew. I didn't understand how anyone would keep it from me and assumed I was aware.

"So who took the information to Facebook that she's dead?"
"Niggi I don't know" She was getting worked up and I knew it was time to end the discussion.

I told my mum last night that my friend was around when she came back from work, but she was later than usual so I couldn't make the introductions. My mum didn't want me having much friends and Charlotte was the first I ever invited to the house. I hoped she would like her.

"Mum?" I called as I tapped softly on her door
"Amy" Come on in
"Where's your friend?" She asked as I pushed open the door
"Good morning mum, she's in the room"
"Did you guys sleep well?"
"Yeah", I said and gave her a peck
"I got something for you yesterday; here, try this on" She brought out a white shorts from her work bag
"Yay!" I jumped and gave her another peck, swang to her bedside mirror and tried it on. It fit perfectly! Aww I loved how my bum looked so good and full in them; my squats were starting to pay off.

I already had an idea of what I will wear on my next date with Benton.

I ran back to my room to show Charlotte, with the memories of what she did earlier, already fading.

I hit Adley's door on my way and he called me an ass as usual.

"Dress up, mum wants to see you" I told Charlotte as I entered the room. She was Facetiming with some dude.
"Who gave you the shorts?, it looks nice on you". She swapped her camera so the guy could see me.
"Please don't do that" I blocked my face with my palm and ran to the wardrobe.

"Hey, I will call you back" She told the guy who was laughing and ended the call.
"Thank you, mum just gave it to me," I told her while I pulled the shorts off and still had my nightie on.

"Oh, that reminds me, I got you the BFF neck chain and the pants I promised you"

She got them from her box and gave me. I was so happy and I wished I could hug her, but again, hugs weren't my thing.

In the next two minutes, we were in my mum's room. I introduced her as my best friend and my mum asked how long we've been friends..
"About 8 years now mum" I winked
"Nice to meet you Charly. Please feel at home and if you have any issues, do tell me"
"Thank you" she was already dancing like a doll
"You are welcome. My mum was so warm, and at that moment, I was so proud of being her daughter.

"Amy, please make some bacon and eggs for me" my mum said.
"Make for me too" shouted Charlotte who didn't realize how disrespectful it was

I wasn't sure how my mum felt about that but she started looking for something in her bag while we left.

In about 10 minutes, I was already done with her breakfast and sent it to the dining. I made use of the last eggs and I needed to drive to the store to get new crates. I decided to go with Charlotte so we could do a little shopping for us.

She wasn't in my room, I called her and no response. Checked for her in the rest room and she wasn't there. I changed my nightie and wore a black silicon pant and red sweatshirt, put on my favorite black hat and darted towards the door. I had a second thought to tell Adley I wasn't home, just in case Charlotte comes back from wherever she was and asks of me.

Few inches away from Adley's door, I heard a moan, then it continued, a bit louder, followed by "why you so cute Adley?"

I recognized that voice! It wasn't Sasha.....