fireawaymarmot (56)in #writing • 4 years ago 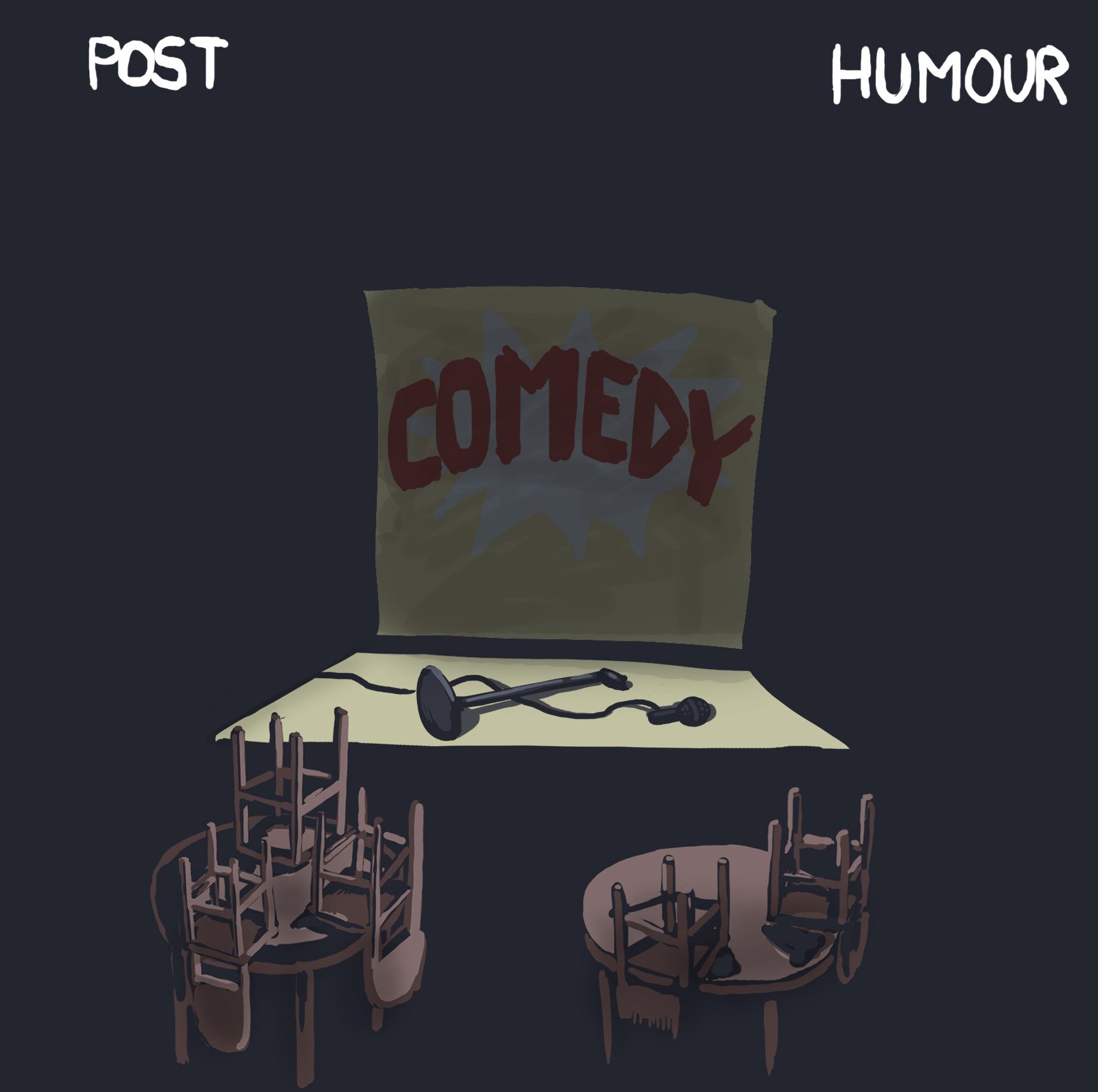 Frankie is sitting alone, on the edge of the stage in the shadows of Brother Earl's Comedy club. The place is completely empty, chairs upside down on the tables, not even a spotlight on him. Someone had left the microphone stand up on the stage, empty of course, just standing watch over him as he sits and broods. He looks into the surrounding darkness and for the seven thousandth time wonders where it all went wrong.

Some people just couldn't take a joke. And at first that had been fine, in fact that had been to his benefit. The protests, people online bitching - it had all added to his notoriety and therefore his bottom line. He'd spoken his mind, and people had wanted to know what he had to say...

But then somewhere along the line the atmosphere had changed. At some point the killjoys had gotten much more serious. And then the accusations had started, and hell, maybe he'd acted a little out of line a couple of times, but so what? We were all of us adults, after all. But then it became about more than just him making a lewd drunken remark to some chick, and that was when he realized that there was something more going on here than just overly sensitive people getting offended. This was a serious power play that was taking place…

And as the noose had tightened he'd done everything in his own power to get to the bottom of things - to find out just who was behind all of it… How could so many people be lying about him if there wasn't someone behind it? And he knew that they were lying. The question was, what was making them act this way? Money? Fear? Who was behind it?

But then he'd spent all of his resources to no avail - no secret conspiracy had revealed itself to him, and in the end he'd been left penniless and alone, abandoned by his friends and without any options left that he could see. Because nobody was interested in what he had to say anymore. Nobody.

As he reaches for the mic stand to pull himself up, Frankie remembers too late and so chuckles ruefully at himself as he watches his hand pass through the steel. He's still getting used to the way things are for him now, the weird paradoxical physics of the place. His place.

Booze and pills… He'd just wanted to sleep. Just lay down and get some sleep, he'd been so tired. But now things are different. Now he can't sleep, ever. The old Fugazi line runs through his head - You will sleep forever / You will never sleep again … And that's still all he really wants, to just be able to take a nap.

Those people. They'd been so serious… And they hadn't stopped. They'd just kept on going and going, until-

At the front of the club a door crashes open. Cold bluish light floods across the audience floor, cut through with panicky shadows. A pair of figures rush into the space, a man and a woman, wearing ratty military fatigues and brandishing automatic rifles. Casting frightened glances back at the door through which they'd entered, they situate themselves off to the right of where Frankie is sitting. With a violent tug the man pulls one of the tables over onto it's side and then the couple ducks down to huddle behind it.

Seconds later the door opens again, more quietly this time, and more figures slip inside. They fan out to different positions just beyond the main floor. Frankie watches on with interest as the couple exchange a brief whispered conference. Then the man calls out to their pursuers.

Frankie still can't quite make out most of the language that people are speaking these days - some kind of pidgin Spanish mixed with Arabic or something, along with dabs of heavily accented English. Across the club floor a cool and confident voice answers the man. Shadows move in the darkness, and Frankie can see the outlines of guns pointed towards the hiding couple.

The man calls back, his speech angry and desperate now. The exchange continues back and forth, voices rising in confrontation, and so now Frankie is getting bored with this… He already knows how it's going to turn out. But then one of the spoken phrases catches Frankie's ear, something that he is able to make out… Uttered by the leader of the gang, loaded with threat and portent:

"Do you think this is a joke?"

And that is just too much. A sudden abrupt howl of absolute hilarity bursts forth from Frankie's lips. And then he very quickly finds himself doubling over and laughing his non corporeal guts out, until phantom tears start to run down his ghostly face. Do these people even know where they are?

After a few more moments of laughter, Frankie straightens up and slowly realizes that the woman is staring directly at him. This sort of thing happens from time to time, whenever he has an outburst of extreme emotion. She gazes in Frankie's direction with a look of gradually dawning wonder in her eyes, while her companion next to her yells back something to the effect of, "No this no joke, do you think this is a joke?" And with that Frankie snorts out another pealing guffaw and the woman looking at him seems like she's also about to laugh, in spite of herself, she's trying to hold it in but here it comes-

Suddenly the gang opens fire on the couple. The woman ducks down but the man is caught leaning upwards, about to hurl back another statement at his enemies, and a bullet punches through the upper half of the table and shears off about a third of the man's head. He flops over in a bloody mess over the woman's back, and when she lifts him off he falls to the floor and she sees what has happened to him. Her eyes widen into shock.

The woman lets out a keening, wailing shriek that causes the gunfire to stop. Her cry rises in the air, and she looks up to Frankie, but he can tell she can't see him at all now, because her eyes are searching about the stage for him as she continues to scream her anguish into the shadows of Brother Earl's Comedy club.

Men begin to emerge from their positions, confident now that their quarry has been defeated. They gather around their leader in a loose group, smiling towards the overturned table. And maybe it's because of the way he'd laughed releases something in his perception, or maybe it's because he's heard enough to recognize the language, but now when the leader speaks Frankie can understand every word he is saying.

"Come on out now, honey. Joke time is over."

And after a few seconds she does just that; she stands up with her hands clasped behind her head, swallowing rapidly and blinking with fear. The men chuckle amongst each other as she walks around the table and starts to approach the group. And only Frankie can see the grenade with the pin pulled that she holds in one hand behind her head, as well as the belt of grenades looped behind her back.

As she approaches the group she starts to pick up her pace, and suddenly the leader understands what is happening and yells, "Stop!" raising his gun and firing but she ducks and drops her hands, diving forward hurling herself at the group, screaming at the top of her lungs:

And then she explodes amongst the men in a giant flash of flame and limbs, tearing through the group and scattering debris in a frenzied maelstrom throughout the club.

A mass of smoke swirls around the room for several minutes. By the time the smoke has begun to clear they are all standing around now, looking at each other with absolute bewilderment. And they are all naked, just like Frankie, who is still sitting there naked on the stage while he applauds their performance, long hard claps over and over in the settling dust. He can do that now, he knows how to make that happen.

And when he's done applauding Frankie looks at these new arrivals, waits a beat, and then says,

He can almost hear the rim shot going off in his head. With that Frankie is about to make his exit from the place - always leave on a high note and all that - but for some reason a new thought emerges in his mind and it's this thought that keeps his bare dead ass glued to the stage.

The whole time he was going through the persecution that marked the end of his life, he'd often said to himself that all he'd ever done was speak his mind. How could they have hounded him so, simply for speaking the truth? That was the old saying, wasn't it? It's funny because it's true. And all they'd ever done was lie, mostly. Such serious liars.

But the truth is.. much of Frankie's act had been coming from a different place than he'd ever let on, an even more private resentment and fear, fuelling a desire to manipulate others dressed up in a way that was in itself a form of deception. And even now he knows that you can make a lie just as funny as the truth… And so when he wonders about just who or what had been using those people back then, there comes with that question the very distinct possibility that he was also being used as a conduit for something, himself. Because he hadn't been honest either.

He looks up into the eyes of the people he'd just seen die. Their faces are all wondering, just like him. But he doesn't have any answers for them, so he just lowers his gaze to the audience floor beneath his dangling bare feet.

It starts to get pretty awkward. After awhile people make to leave. First the couple, picking their way across the floor while trying to get the hang of holding each other's hands. Then each of the gang members slowly files out one by one. Soon everyone has exited the club, wandering out into the broken world, leaving Frankie to sit on his stage and wonder if the lights are ever going to finally dim.

Both the music and writing are by the author of this post. To view more of my work please visit www.fireawaymarmot.com