Life as an Opera Singer

"My wife is an opera singer," says my husband, @negativer, to the man sitting next to him at the bar. We like to go to gastropubs and try out different beers and food ( @negativer is a home brewer and a beer aficionado), so of course, it's more interesting when you meet people and learn something interesting, so he shares with others what I do.

And why not? It's a glamorous enough sounding job, and one that most people don't even know about except that you are on stage singing a lot. So people have a natural desire to ask questions about it.

Plus, he knows I'd never openly share that. It's not that I'm private about it, it's just I'm not one to blow my own horn.

I just love to sing. I always have. Ever since I was a little girl, I'd always had dreams of singing on stage. Not for being in the spotlight or fame, but just because I love to sing.

But it's not as glamorous as you might think. 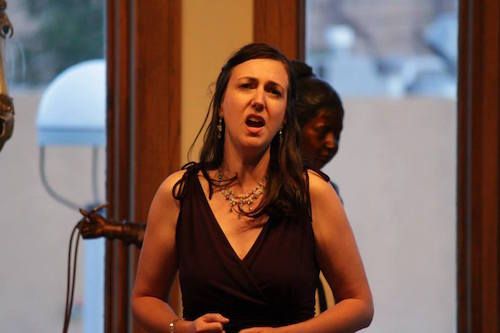 When I went off to college, I didn't think I was talented enough to make a living singing, so I tried being a zoology major because I loved animals. I just didn't love science, and when I realized that my favorite class was choir, I made the switch to becoming a voice major.

And thus began my long, treacherous - and torturous - road of learning how to sing. I somehow managed to graduate college after a 3+ year hiatus, all the while taking voice lessons with various teachers that, despite knowing how to sing themselves, couldn't quite help me to release my voice. It was trapped in there, somewhere. I knew what I was capable of, I just didn't know what to do.

Pile on top of this, my insecurity about my talent, and rejection from the college where I sought my masters (I ended up going for piano instead), I thought my dream was simply wishful thinking. I spent thousands of dollars going from one teacher to the next, going to master classes and young artist programs in hopes of figuring out how I could sing the way I wanted to.

A side note about Young Artist programs: they are designed to teach young opera singers things like acting, performing, and to some degree, technique. They're usually very expensive and you get some kind of performance experience. Essentially, you are paying them to let you sing, as opposed to getting paid to sing. Big difference. And while these programs can serve great purposes, one cannot get a career off of them for obvious reasons.

And the truth of the matter is, I wasn't "young" anymore. Opera is an art that requires maturity in the voice. The voice doesn't even reach it's full maturity until you're 40 or even 50 years. For someone like me who didn't really get the training I needed until much later in life (after 8 teachers!), it was time to move onto a real career. There weren't any opera companies in central Wisconsin, so we moved to Florida where there were more opportunities. I auditioned for an opera chorus, and got in! I was super excited and was finally feeling like my voice was getting on track, and my career was about to take off...or so I thought.

The thing about being in opera chorus is that you can't make a living off of it unless you're at the Metropolitan Opera (I think that's the only full-time opera chorus in existence, but I could be wrong). You are contracted each season for only certain operas where they need you, and you can make maybe $1,000 per season if you're lucky. There's one season per year, so do the math and you can see how this doesn't even come close to paying the bills. Most opera companies won't let you be in more than one opera at a time, either (and really, it's insane to do two simultaneously anyways).

So you really end up piecemealing together some other performing opportunities like singing at restaurants, parties, weddings, and funerals. And luckily, I teach. Not all performers can teach, as I learned, but I have a love for teaching and my students have taught me so much over the years about myself and about how best to reach people so that they don't walk away feeling discouraged.

So this is the life of an opera singer. It's feast or famine most of the time. The picture at the top is me singing the soprano solo for the Brahms Requiem in Chicago with the Tower Chorale. This was one of the fondest memories I have from performing. Both of my parents were in the choir and it was a great honor to be a part of this performance.

Am I living my dream?

To some extent, yes. I think I've just come to realize that my dream doesn't quite fit in the mold that the opera world forces you into. My path is different, and as one of my teachers encouraged me, "There are singers that need opera companies in order to sing. You don't need to rely upon others to sing, you have what it takes to do it all yourself."

I would amend that to say that I don't need others besides God in order to sing, and I depend so much on the support of @negativer. It's been quite a journey, and while it's not over yet, the scenery is quite different from when I started out. I've learned to enjoy the scenery along the way, rather than trying to reach that destination. Each hill to climb over is a discovery of something new on the other side.

singing in the rain

You have a fantastic voice!

It's a busy day in heaven and a line is forming at the pearly gates...

Saint Peter: So, How much money did you make last year?
Departed #1: I cleared over 7 million dollars last year.
Saint Peter: (sighs) You must be the corporate attorney from Seattle.(reluctantly) Alright. Come on in.

Saint Peter: So, How much money did you make last year?
Departed #2: I made about $700,000
Saint Peter: (sighs) You must be the orthodontist from L.A. Alright. Come on in.

Saint Peter: So, How much money did you make last year?
Departed #3: I made almost $7,000
Saint Peter: OH! So what instrument do you play?

LOL! So true. And thanks for the complement!

My wife is the most talented person I know, but so much about success comes down to luck and timing. Come to think of it, it's a lot like steemit. Good content doesn't always win.

Ya, so you might say that I'm very well-equipped for steemit because rejection is something I'm used to. It's good to have other reasons for doing it than money ;)

I think you have a beautiful voice and although I'm by no means an expert, I can tell what is pleasing to the ear; mine at least.

Thanks, it's funny how little the beauty of the voice actually counts in the opera world, believe it or not!

This is an interesting insight into the opera world, and your voice is fantastic, it gave me chills! 😍😍😍

Thank you, Julia. It was eye-opening for me as well, and not necessarily in a good way. I had professional opera singers that had been in the business for decades tell me that if they were starting out with how opera is now, they wouldn't have bothered. So something has changed in recent times that even the pros don't like!

It sure is beautiful when you step back and look at your life. You can see those hills you already climbed, knowing how the future played out. God has surely been with you and is taking you places still.

Ya, I know God has kept me from some things, like having a career in opera, but I see how He actually spared me that. There's a lot of people who want to make you into their image, and I'm glad I don't have to deal with that.

Yes, He sees the big picture and knows what is ultimately for our good. (Which is on my mind, if you read my latest post.)

Hi @morodiene, welcome to steemit, and thank you for this interesting description of life as an opera singer. I enjoyed reading about your training and experiences as well as listening to your performance of Donde Lieta.

Thank you for the exposure! I am following you and will check out the other classical musicians in your article.

very inspiring to me!

I'm glad this meant something to you. It can be eye-opening to realize that your dream may not necessarily match up with how reality is, but I don't think you should stop pursuing that just because "that's not how it's done"!