Witnessing the Dawn of an Era

Blockchain eco-systems are evolving and maturing. Governance has proven to be one of the thorniest challenges they face. This is loudly illustrated by the on-going shouting match between Bitcoin and Bitcoin Cash and by the oversized influence 2 persons (Vitalik Buterin and Vlad Zamfir) have over the fate of Ethereum.

Thanks to the DPOS consensus algorithm, Steem (after bitShares and before EOS goes in production), brings an advanced solution to the governance challenge. This solution is akin to (but better than) the Representative Democracies that advanced countries have come to select as the best among those that can be implemented in practice.

Blockchain systems like Steem have the ability to change the society because they can be strongly linked and extend how people interact with each other, economically and socially. They are a "life extension", they are a new institution. And institutions need responsible behaviour. Proof-of-Work systems like Bitcoin, Ethereum, Monero, etc. assume that people cannot be trusted, and replace trust in people with trust in mathematics and code.

DPOS systems like Steem and EOS take, philosophicaly speaking, the opposite approach. While mathematics (cryptography) and code are used as powerful tools to secure the system, they also require people to step forward and assume responsibility. Become witnesses - testify that the dealings (transactions) recorded on the blockchain are valid and honest and happened in a certain order.

Those witnesses submit an application not unlike a "political program" and request that the owners of stake in the system (holders of Steem Power in Steem) vote for them. Improving on the real-life democracy, in Steem people can give or retract their vote for a witness at any moment and the votes are tallied every 63 seconds !

If the analogy with representative democracy sounds a bit unsettling to you, I've recently read an equally good one in this excellent paper

In DPoS (n.red.: steem), however, the validators can be thought of as contractors that are hired by the owners of the network (n.red.: owners of Steem Power). They are hired (voted in), given a job (to produce blocks), paid (through inflation [...]), and can be fired (voted out) for not performing their duties.

Steem as a blockchain functions remarkably well, as the @blocktivity stats attest. Current block-producing witnesses are highly skilled computer engineers and they do theirs jobs extremly well We want to take Steem further! We want to help this great blockchain onboard more (real) people faster and "touch" them with its magical touch, for the benefit of all. We have therefore joined forces. We believe that a team, pooling skills and working together, can help secure the blockchain alongside the great 20 witnesses that are already constituting the "Steem government".

But while safety and seamless functioning are non-negotiable, this blockchain deserves more, much more than that. And a team, with complementary strengths, can do more than reliably minting blocks.

Having a witnessing team is central to our approach. Our team is currently small, only two people, but it might very well grow in the future. We are Pablo Staiano (@pstaiano), an experienced Spanish-Argentinian devops engineer, and Sorin Cristescu (@sorin.cristescu), a Romanian-French IT Architect. We are both located in Luxembourg, the only Grand Duchy in the world, hence the @lux-witness.

We are hereby applying to become an approved witness on the steem network.

As we are only starting from well below position 100 in the witness list, we'll be lucky to get a few tens of blocks to mint a month. We have thus begun with a VPS from contabo.de Heeding @gtg's call we are also going to run a seed node. We plan to leverage what we learn with this small configuration before growing to a full setup using powerful dedicated servers with the aim of eventually running a full RPC node.

However the hardware configuration is clearly not why we ask for your vote. Rather, we plan to focus and deploy energy and skill in spreading steem awareness far and wide, at every level including in the business world. We need your vote for our political program!

Thanks to @gtg, @jesta, @roelandp, @good-karma, @timcliff and all the other great witnesses, we know that our proving ground will not be the quality and speed of the server, at least not until, thanks to your votes, we'll climb up the rankings.

We have accordingly decided to focus on short-, medium- and long-term objective to help the eco-system of the steem blockchain, including Steemit.com, Busy.org, Utopian.io, Fundition.io, DLive.io and all the other great applications tapping the power of steem.

Many people have not used their 30 witness votes. There is strictly no downside to choosing witnesses. Voting for witness is totally different from "upvoting good content", your "voting power" is not impacted.

If you care about these goals, you can help!

Or you can vote "in one-click" using SteemConnect here (or by clicking on the image below). I upvoted your contribution because to my mind your post is at least 110 SBD worth and should receive 219 votes. It's now up to the lovely Steemit community to make this come true.

Thank you Truffle Pig, that came as a surprise. 110 SBD !? Are you sure ? I remember your stats that the median post makes less than 1 SBD ! Have those stats changed ? Anyway, @smcaterpillar, I confess I remembered a class I had taken called "Writing with Impact".

I've learned there about that Flesch-Kincaid readability score. And found it again when you introduced Truffle Pig. So in this post I've tried to shorten my phrases. It's been hard. I'm doing it in this comment and feeling the pain. Man, I love long-winded phrases with a passion! :-)

Anyway, it looked like it "paid" with our buddy Truffle Pig who fell for it, snout first ! :-)

i want my voice heard!, i hope there is no "Downvote War" in steemit again...
it's so sad to know that whales downvoting each other.

a minnow like me really need help, and they choose to defend their ego

Indeed, I believe flag wars are a misguided idea. But then again, we are a still a young community and probably need to go through these in order to learn.

I'll try to plead in favor of "live and let live". It's not ideal as everyone wants justice and many have the feeling that the way rewards are distributed right now is not fair. But still, I'm convinced it's far better in this case to apply the old oriental wisdom of the three monkeys: "Speak no evil, See no evil, Hear no evil!" Speak No Evil!
Hear No Evil!
See No Evil!
But

Even blockchain world is totally Free and Offered Full Freedom, it doesnt mean we can do anything we want. 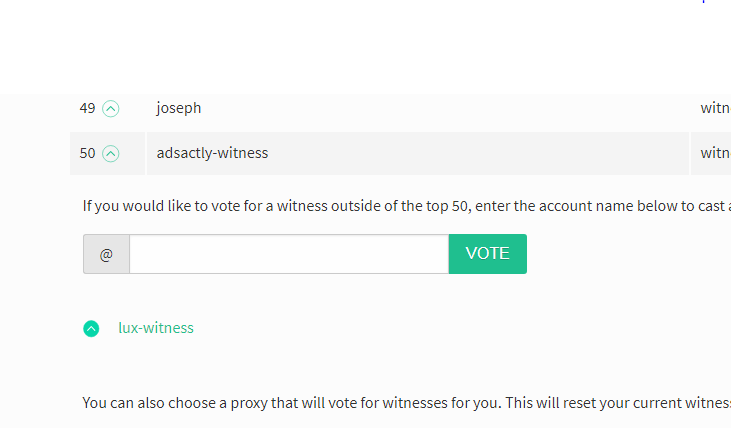 You got a 16.30% upvote from @postpromoter courtesy of @sorin.cristescu!

Itcan be useful to all of us. Thanks a lot

It looks amazing, it will be useful to me once :)

Hello friend, excellent publication, I liked it a lot. Count on me, I invite you to visit my profile and count on you too, Regards

let's get it all boys

Itcan be useful to all of us. Thanks a lot

A bit late to the party, I have been struggling keeping up with Steemit lately. Anyway, big congratulations for this step forward! Steem and the world will benefit from your actions, that I can be sure of.
I knew that I have to keep some witness vote slots clear, now that's showing the value. Can't wait to see all the great things you guys will make!

Wow. By far the strongest and most relatable witness message I've read. The SEPA->fiat STEEM integration would be so, so, so massive. Voted!

Congratulations @lux-witness! You have completed some achievement on Steemit and have been rewarded with new badge(s) :

@lux-witness. I like your idea on developing Steem blockchain for government. It would be useful for our future democracy. I support your project and vote you as witness. Good luck!

Hello Lux-witness.
I have a lots of follwers. I am making contest everyweek. If you want I can make my people approve you as a witness. You said In the medium term, besides encouraging more content creators to come on Steemit.com and Busy.org, we plan to also encourage businesses to try out the code-base of the steem blockchain for specific business applications.
I want you to encourage my people with high priority. If you want to spread steemit in myanmar you can count on me. There are a lots of streemian in myanmar.

I always support new witnesses for simple reason that oldies may collaborate to undermine the system.

So keep supporting new ones to safeguard the system