Witnesses run the backbone of the Steem network. First and foremost they are the block producers of the network, the functional equivalent to mining pools in the Bitcoin Network. The top 100 witnesses have the exclusive right to produce blocks, based on a system of consensus. In general, the more support a witness has, the more blocks he or she will produce.

That is the core function of a witness, but they provide many peripheral functions as well. In order to secure your vote, they also provide other forms of infrastructure and services to the network. This is stuff like running seed nodes, running API nodes to support other websites based on Steem, alternative Steem clients such as Busy.org or eSteem, and various other services depending on the witness.

They also form a pillar of the Steem political system. They work with developers on new software proposals for hard forks, and they make the final vote after the software is ready to be deployed.

Why you should vote for Witnesses Witness voting is based on a system of approval, rather than representation as is typical in a national parliament. Witnesses have power in the Steem political system, and thus they have the power to support or to undermine it. Approving a witness means that you trust this person has the character and competence to support the network, and not to undermine it. When you approve a witness, you make that person more likely to produce blocks, and lower the chance for all others. Thus approving witnesses is done to increase the power of those whom you believe to be trustworthy and competent, above those who you believe are not and those you don’t have enough information to judge.

There is a little bit of representation for witnesses as well, when they vote on hard forks. In this way they are intended to represent the community and vote according to their interests, or risk losing support.

Since witnesses receive an effective salary for their work, voting for them is also a way of funding the projects that those witnesses are running.

Hi, I’m Demotruk. At least that’s the name I go by online. You can find me by that name on Steem, Reddit.com and loads of other websites. I studied Physics and Astrophysics in University, and have been working as a software developer since about 2010.

Along with @eroche, I run the @steem-dublin account. That is currently running regular Steem meetups in dublin, subsidizing them with the reward pool and also supporting Irish posters with upvotes and resteems. We plan to make it an all-Ireland project with the @steem-ireland account.

I haven’t yet done any development for Steem, but I’m hoping to change that. So far the main way I have been supporting the network is with my vote. I believe that the ‘subjective proof of work’ system provides the main competitive edge for the Steem network, but it is vulnerable to selfishness undermining the system. For a while I was using my vote to counter selfish and otherwise poor voting, and sacrificing significant amounts of curation rewards in order to do so. I sacrifice rewards, but the selfish voter also loses them, and those funds end up being allocated by the rest of the network. More recently I have tried a different tack to encourage rather than penalize, which is to delegate my funds out to people whom I believe are voting responsibly at a lower than market rate. This is profitable for me but I don’t think it is achieving the same purpose, so I stopped accepting new customers for this and will wind it down over time.

My plan is to spend more time working on software projects for Steem and supporting Steem generally the more I’m able to live off it. At the current price I am close to being able to achieve that.

You can also meet me in person at Steemfest (yay!) if that helps.

I’m currently renting a virtual server from @privex, the hosting company run by @someguy123. With 16GB of RAM is it doing the job fine for now, but will likely need to be upgraded to 32GB in the near future. I initially upgraded one of my own physical servers to run a node, but it turned out to be inadequate. That will end up converted into a Minecraft server for Steem users.

I want to take control of my own physical hardware for the sake of geographic distribution and redundancy. I don’t yet have a seed node but I should be able to afford to run one after January or so. I’m also hoping to help my sister @beanz run a node because I think she would be popular as a witness.

To get a general sense of my politics you could review my post and voting history, but in terms of witness roles I’ll summarize.

I think witnesses should aim to maintain a strong minimum peg for the SBD. That is difficult, but over time it should be made ever stronger. I think it is much more problematic when SBD is below $1 than above, so they should be aggressive in ensuring that any bias is to the upside. Overpriced SBD has its problems, but ultimately provides the network with increased spending power which should be seen as a boon.

I think dynamic bandwidth limitations are a core feature of Steem and should be one of the main weapons in the fight against spam. Legitimate users should be provided with bandwidth via delegation so that spammers find themselves constrained with less adverse effects for legitimate users.

I think supporting on-boarding should be a witness task, but that’s not practical in the current system. Steemit Inc pays the price for onboarding right now, but if the cost was a limited but non-financial resource such as bandwidth allocation, then whales and witnesses would be able to validate users and create new accounts for them without having to burn money in the process.

Thanks for reading this far. If you feel I would do a good job, I’d really appreciate your vote!. If you have any questions about what I would do as a witness, or my politics etc., please feel free to ask below!

@demotruk thank you for joining us as a witness! I just added you to my votes which should help start getting at least a block every day!

Wow, thanks so much!! 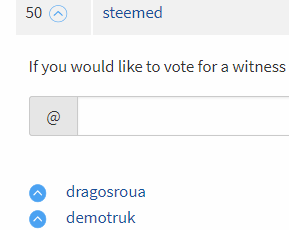 @demotruk I previously congratulated you on your work
I am very supportive of this work, although I can not help in this, I understand you will work positively for steem development.
but I can entrust the question, what is your political max like nyang you say in this post ?
would you compete in internal steem ?
thank you and very good post.

I'm afraid I don't understand the question. What do you mean by 'political max' or 'competing in internal Steem'?

I mean,
Will you compete in steam to get a decent witnes position ?

congrats.. it's really great to be a witness, I started 3 days ago and I love it... hope that you also support me as witness... I vote for you

I Will Vote For Ya Bossman, hmm says invalid.

Thanks! I can see that the vote went through.

This is certainly a good news. You have my support even without asking for one. Will communicate you further on. All the best.

Great post hope you get more votes for Witness , you deserve it

Nice post..will support your work. Happy to join as a witness...