It was a cold Saturday night when I pulled this next wine from the cellar. I had been given it to celebrate a milestone anniversary (well making it through each year is a milestone in itself these days!). I was intrigued about the wine, not having tried wine from this stable in the past but knowing it came with a very good pedigree.

The wine selected was from the Marisco stable, from Marlborough's Waihopai Valley (and a magnum to boot).

Winemaker Brent Marris, having earlier created the Oyster Bay and Wither Hills wines, established Marisco in the early 2000’s. The Marisco name however dates back at least to the 1100’s when the de Marisco clan held high roles within the English court. The Marris’ have a direct lineage to this noble heritage. The vineyard is a 268 hectare site situated in Marlbough’s Waihopai Valley, an area known for producing very expressive and pure aromatic wines. Marisco wines are produced across three brands – Fernlands, The Ned and the King’s Series.

Marisco was voted the New Zealand Wine Producer of the Year at the China Wine and Spirits Awards 2013, and New Zealand Winery of the Year at IWSC London 2011. They are one of Marlborough's most successful wine businesses, exporting to the United Kingdom, Australia and the United States. Under development is a new “vineyard park” further up Waihopai Valley, adding another 600 hectares while retaining a significant sheep and cattle operation. This will make Marisco one of New Zealand's largest privately owned wine companies.

So onto the wine , the 2011 Marisco King's Wrath Pinot Noir. The 2011 vintage in Marlborough was a very good one. Sunshine was plentiful, rain was well spaced, and frosts absent. Exuberant ripe fruit displaying bright aromatics with a lovely structure was the general consensus. 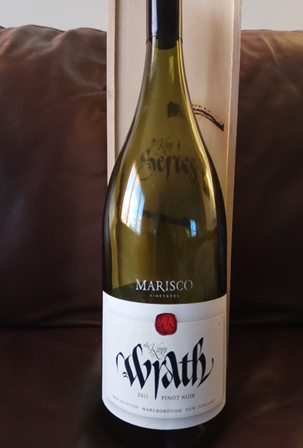 When tasted on 24/6/17, the Marisco 2011 King’s Wrath Pinot Noir had a light red colour with a brick hue, aromas of cloves, spicy vanillin, plums and dried fruits. The mouthfeel was rich and round, with fine grained tannins, gentle acid and hints of toasty oak.

Sadly this wine harked back to what may have been as it was well into its twilight years. The rich fruit, fragments of which remained, were mostly gone leaving behind a pleasant mouth-filling wine but lacking in real presence. It’s freshness of youth has passed on and unlike many a Bordeaux or Burgundy, it hasn’t transformed into a complex array of mature characters, rather it has just faded.

In the de Marsico days, had this wine been brought before the court, the provider may well have been off to the Tower…

Submit
$0.78
10 votes
4
Authors get paid when people like you upvote their post.If you enjoyed what you read here, create your account today and start earning FREE STEEM!
Sort Order:
[-]
munawar1 (51)  ·  3 years ago

@oenophile, Vast vineyard and unimaginable how abundant the harvest, I really like. And precious historical background.

Those are great wines, sorry it was held a little too long. I have always preached about holding them too long, but sadly I do it myself... Cheers from @steempub-trail! Feel free to join us over at @steempub, there are several wine lovers and other booze reviews there!

I'll check you out.