January 20, 2018 - As a former WikiLeaks "Associate" who had over 60 contacts in the organization, and saw every single one of those contacts go black, it is very obvious what has happened. However to understand it all one must approach WikiLeaks not for what it pretended to be but for what it was organized and designed for from the very beginning and for what it really was. One must also re-assess the Internet itself with the understanding the World Wide Web was originally implemented as a military communications Network hidden under public infrastructure and secretly organized and implemented to allow the FVEY countries to spy on every person with a computer in the world.

I detail the origins of WikiLeaks in my book in greater detail but the short version is that the control freaks and the killers who compromise most of the so-called "Intelligence Community and the psychotic criminal cabal that is the Rothschilds bankster mafia, who in fact control these said agencies, did not foresee the advent of the citizen reporter and whistleblower, and could in no way allow for anyone not under their control to be informing the public about their operations and crimes.

What does this have to do with Seth Rich? Bear with me a moment, as this background information is necessary in helping you to understand and see the conclusions I have reached.

The first real leak sites you have probably never heard about. Sites such as; Orlin Grabbe, Anarchadia, Cryptome, JAR2 and then later all of the thousands of 911 Truth sites that suddenly popped up in 2001 and then almost just as quickly all disappeared, could not be allowed to exist! The corrupt mass murderers and criminals in the Military Industrial Intelligence Complex, and later the architects of 911, could not allow for their operations and illegality to be exposed. They are too busy bringing about their Orwellian Luciferian New World Order, and this, to them is bigger than you and I and any little whistleblower or truth seeker. To the architects we are nothing but useless breathers whom they plan to eliminate in their plans for depopulation, and it is these Illuminati New World Order freaks who control FVEY, the Corporation of the United States and all Anglo-Saxon countries (about which you can read my research into the New World Order and any of the dozens of books on this site) and who will do anything to keep their plans secret, including the killing and false imprisonment of anyone they label a threat.

So who is the closest to the New World Order Rothschild psychopaths? Who owns the Bank of England and controls the crown? Who has the ability and the power to kill and assassinate anyone in America, and in the world for that matter? The Rothschild World Bank ASTEROIDS assassination teams? MOSSAD? Yes and no. Military Intelligence 6 has that power.

No one asks who are Clinton's assassins. No one dares to go there. No one is allowed to live to blow the whistle on the psychos in any significant way and any leak is quickly discredited because they control the media and by creating WikiLeaks they sought to control the leaks as well, but you can only kill so many people before you expose yourself for what you are. The Asteroids, MI6, MOSSAD and CIA. All involved in 911 and bringing about the New World Order! Through the their own arrogance have exposed themselves, perhaps intentionally!

The MI6 connection has been clear to me for a long time but now is completely exposed and as clear as the photographs in front of you. Unfortunately for MI6 and himself, by not being 100% honest Craig Murray has also exposed himself as, at minimum an MI6 Asset, and most likely an MI6 Officer (Possibly one Hugh Stephen Murray Elliot). Why do I say this? The inside information I had regarding the DCCC leaks and the Podesta E-Mails, was that they were passed to Mr. Murray by Seth Rich on multiple thumb drives after Murray flew to the US with the sole and expressed purpose of meeting the "source" and met Rich in a park not far from where he was later shot and taken into custody. Murray knows there were no Russian hackers and so does WikiLeaks and the "real" Assange (if he still exists or ever existed at all) and I of course know there were no Russian hackers involved as I was also involved in releasing the same material from the WikiLeaks remote storage location where they were being uploaded and the transferred to the WL servers for publication.

So who would have informed the hit team about Rich? Murray? Or WikiLeaks? Or were they working together as I suspect.
First the host calls me an American citizen "A lie" then Michael Bohm tries to say the Vienna Conventions realte to Hacking. Finally near the end I say very loudly in English "Michael there was no hacker" What is interesting is that I was not asked back and they could have killed the Russian Hacker claims right then and there by allowing me to go on the air and explain everything I know. They did not do so. Proving the hosts are yet more Zionist/Globalist media toola. A very serious accusation since this is the most important Russian Federal channel, but one that is supported by what you see before your eyes.

After he had been shot, with a non-fatal injury, Rich was then taken to a nearby hospital and was alive and well. An MI6, Asteroids or MOSSAD team, dressed as police then appeared and Rich was interrogated and then either killed or taken to a secret prison somewhere, where I suspect the real Assange is being held and other high-value prisoners. The only way to answer that question is to examine and verify the remains of Rich if there are any.

I have long asserted that WikiLeaks is an entrapment operation (I can personally verify this with my own experiences), a Limited Hangout designed to cover up 911 and protect MOSSAD/MI6/CIA from real leakers and real leaks was implemented in response to sites like JAR2 and others which were not under their control. The long list of victims of WikiLeaks is a testament to their betrayal of truthers and whistleblowers.

You see what they wanted is exactly what they tried to get. A centralized source that is seen by the masses as the only legitimate place for leaks and which the media cites and supports and links to, in order to continue to mind control the masses, with the narrative and the information that THEY want you to have. We have seen a long series of such "media" outlets with the Litmus Test being Israel and 911. The Pizzagate horrors only made this clearer and proved in the minds of many that outlets like InfoWars and the Intercept and "journalists" like Glen Greenwald and Sibel Edmonds and others are nothing but Gatekeepers being used to feed those who seek alternative views and truth with a steady diet of carp while avoiding the real issues and protecting the New World Order elites and the Zionist 911 mass-murderers. The Litmus Test is 911 and the proof is that they are allowed to continue their operations facing no violent opposition with their servers and infrastructure allowed to operate unhindered in the United States and Western controlled territories.

Gareth Williams is the key to unravelling the web of deceit and WikiLeaks', at minimum collusion, with the Illuminati killers. 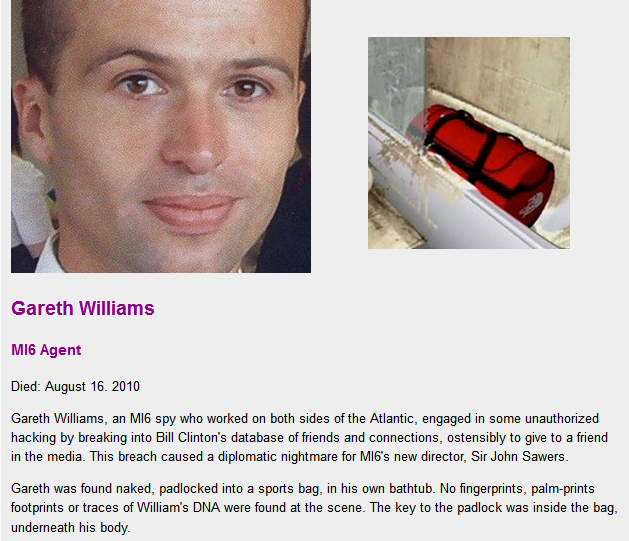 As we have seen with the hundreds of Clinton kills and all of the deaths of WikiLeaks principles (I include my own poisoning here), they always leave room for doubt and speculation, which makes it clear that the deaths were not accidental or in keeping with the official findings. Like the two head shot "suicide" of Gary Webb, the unlikely the Polonium killing of Litvinenko and thousands of others, the assassination of Gareth Williams left and almost ritual like fingerprint and warning message to anyone who might dare to expose the "Illuminati" criminals. In this regard we can thank the Clintons for doing more than any other criminal element in history for exposing the insane Illuminati elites.

Finally if this has not laid the Russian Hacker accusations to rest, let us look at why the MIIC needs the Russian hacker myth. The Illuminati psychos want war with Russia. Russia has done nothing to warrant such, so the Military Industrial Intelligence Complex is trying to manufacture the consent of the populace by making them believe that a Cyber Attack is a reason to go to war. A Cyber Attack that is almost impossible to prove and quite easy to fabricate.

This article is dedicated to Michael Ratner, a good man who tried to do what is right, in an evil world. RIP