WikiLeaks Has Published Leaks On Trump Admin And Russia, And Is Seeking More

caitlinjohnstone (71)in #wikileaks • 4 years ago (edited) 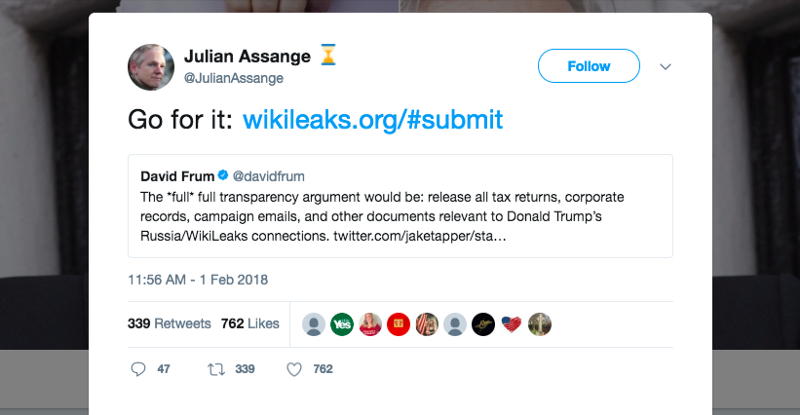 WikiLeaks editor-in-chief Julian Assange recently posted a harsh criticism of what he calls Trump's "subservience to Saudi Arabia's military adventurism in Yemen" and the explosion of civilian deaths caused by this administration's greatly escalated drone assassination program. This received an angry backlash from many of Assange's Trump-supporting Twitter followers, one of them exclaiming, "Has your account been taken over by the deep state? Seems like you are trying to turn us against Trump. I have lost a lot of faith in you Julian. I thought you were a Trump supporter but this seems to show otherwise. Keep this up and you can kiss that pardon goodbye, sir."

"My principles are not for sale," Assange replied.

Over and over and over again you'll see this exact sort of confusion about Assange and WikiLeaks coming from both sides of America's illusory partisan divide. Democrats believe that Assange is a Trump-supporting Kremlin asset while Trump supporters believe Assange is a based MAGA hat-wearing ally to their cause, the former because they were told to believe that by CNN and the Washington Post and the latter because they've seen him championed by Fox's Sean Hannity and the elaborate 4chan hoax "QAnon". Neither could be further from the truth. Today Assange responded to a call for transparency on Trump "tax returns, corporate records, campaign emails, and other documents relevant to Donald Trump’s Russia/WikiLeaks connections" from toxic neocon David Frum with the words "Go for it" and a link to WikiLeaks' leak submission service.

This is not the first time WikiLeaks has solicited documents on the Trump administration, and it won't be the last. Since long before the election and continuing through to the present, WikiLeaks has been harshly criticizing the president's refusal to release his tax returns and publicly asking for leakers to submit them. They are on record trying to persuade Donald Trump Jr to do the same in a conversation that has been spuriously criticized but which when examined impartially is plainly just a leak publishing outlet soliciting a potential source.

More importantly, WikiLeaks has already published Trump administration leaks. Its Vault 7 and Vault 8 leak drops exposing the CIA's scary surveillance and hacking tools are comparable to NSA leaks from Edward Snowden against the Obama administration, and much like the Obama administration's vindictive backlash against Snowden we are seeing similar retaliation from the Trump administration for the CIA leaks. Trump's CIA Director has pledged to shut down WikiLeaks as "a non-state hostile intelligence service often abetted by state actors like Russia,” and his Attorney General has stated that Assange's arrest is a priority, which Trump himself has said he would permit. Mike Pompeo's increasingly vitriolic and threatening rhetoric about WikiLeaks is reminiscent of Joe Biden's labeling Assange a "hi-tech terrorist" eight years ago.

WikiLeaks in reality is not a friend of Republicans anymore than it's a friend of Democrats, because WikiLeaks is and always will be first and foremost an enemy of corrupt power. The liberals who used to love Assange when he was dropping leaks about the Bush administration now hate him, and the conservatives who used to attack him as an enemy now celebrate him as a hero. This dynamic will necessarily switch again when more leaks drop and conservatives see clearly that Assange's principles are not for sale.

Right now they still don't get it, and the delusion that Assange is a Trump supporter is even more pervasive than the equally absurd claim that he is a tool of Russia, who WikiLeaks has also published documents against. Long before the Spy Files dropped last year covering Russian surveillance practices, independent journalist Suzie Dawson documented the thousands upon thousands of other critical Russia documents that WikiLeaks has published over the years and its other obvious signs of lack of sympathy for Moscow. The only thing linking WikiLeaks to Russia is the authoritative say-so of the notorious liars in the US intelligence community and their plot hole-riddled narrative which Assange unequivocally denies.

There is in fact no reason to believe that Assange is a Trump or Putin asset, and there are many reasons not to, but the partisan dynamics of America's neurotic political feuds will continue to keep people blinkered for as long as the cognitive dissonance is more uncomfortable than keeping their heads up their asses.

It's about time that people start voting for the truth instead of acting like popstar-president groupies.

Very well written article. You wrote a sound assessment of how Julian Assange is impartial in how he treats the leaks. He doesn't care about which country or politician is harmed; he cares about the truth. And this is something many people forget.

Thanks again for shedding the proper light on this. Sad to say David "Axis of Evil" Frum is an embarrassment to his fellow Canadians. His promotion of the US war machine should make him eligible for a trip to the Hague in chains.

He is deeply vile. Definitely on my "look what he's saying and believe the opposite" list.

Assange is neither of the left nor the right....He is Australian. it is about time that all those who have wielded power over the people for their own gain be held accountable. Trump was the lesser of two evils at the time. What we all should realise is that evil in of itself is a lesser option. Great article.

Yes, that is how I feel too. I'm an American, however, I'm neither left or right. I am an independent, and I'm on the side of the truth.

What does he feel he's going to accomplish if he gets his hands on the tax returns? Is he going to blackmail Trump out of his claim of subservience to Saudis Arabia if there's something substantial in there or will he publish them in some sort of judicial up marksmanship. The one thing I often ask myself is that if there's been years of transacting back and forth with Russia in business dealings just how is it that no one who may have been involved in those dealings have leaked anything about them? That's exactly what people expect to find but if it's in his tax paperwork then there is also other paper trails. I just don't find it logical given all the leaking going on.

Its very funny how same people who were condemning Assange in 2010 for releasing Mannings leaks and exposing Bushes administration and war crimes, now praise him for being part of exposing DNC corruption.
While people who were praising Assange in 2010 for helping them prove that Iraq and Afghanistan wars were unnecassary, are now accusing him of being Russian asset.
Same fucking people. No principles, just partisanship.

What a honest man wikkileak honored was

Whit things like this you think this world is walking straight to war and self-destruction, but thaks God not all things are bad.

in general, as a broad stroke, the right have it correct on domestic policy, and the left have it correct on foreign policy. now if there was only a bunch of intelligent people who could get together and collate these policies into one sensible government..