Trump says it will be hard to unify country without a ‘major event’, then Hires John Bolton as National Security Advisor 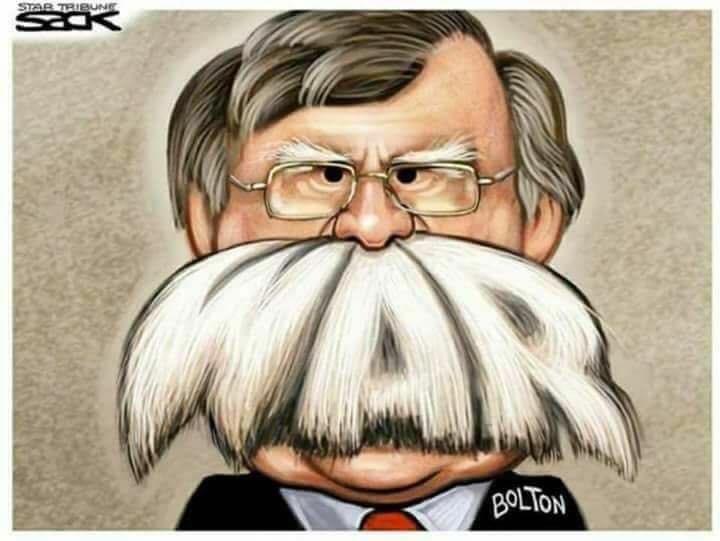 A quick timeline of events:

30 January 2018: Trump says it will be hard to unify country without a ‘major event’

Trump spoke about creating a more united country during a lunch with a number of television news anchors. Trump said the United States has long been divided, including during the impeachment of former president Bill Clinton. Trump also said that Americans usually come together during times of suffering.

“I would love to be able to bring back our country into a great form of unity,” Trump said. “Without a major event where people pull together, that’s hard to do. But I would like to do it without that major event because usually that major event is not a good thing.”

19 March 2018, We wrote "If John Bolton is Appointed National Security Adviser, U.S. will be at War within 18 Months"

He thinks Iran is the next war we should have and can't reconcile the fact that Iran has arisen to power because the United States dethrowned his only regional check on power, Saddam Hussein. And John Bolton still thinks the Iraq War was right decision.

Bolton, once rumored to be Trump’s pick for secretary of state or top choice to run day-to-day operations at the State Department, is considered one of the world’s most disliked foreign policy operators. During his less than two years serving as the U.N. ambassador under former President George W. Bush, there was a severe uptick in anti-American sentiment among diplomats.

The new national security adviser may push for aggressive stances toward Russia, the self-described Islamic State group and North Korea, experts familiar with his track record say. In a Wall Street Journal op-ed published last month, Bolton argued there is a legal case for a U.S. strike against Pyongyang.

He has stood by the 2003 decision to invade Iraq, even as bipartisan consensus has moved toward agreeing that the invasion was a mistake. While acting as undersecretary of state for arms control for George W. Bush, Bolton was emphatic that there was proof Iraq possessed weapons of mass destruction. He reportedly created a dynamic in the department that led to intelligence officials being afraid of defying his unverified claims.

The top national security adviser to the most ignorant and impressionable president in modern memory is a man whose lust for war is so rabid, it makes Senate Republicans uncomfortable. Bolton wants to bomb Iran and North Korea, and he wants to do it yesterday. Just this month, the former U.N. ambassador told Fox News that Trump’s upcoming summit with Kim Jong-un was a positive development — because moving right to high-level talks would accelerate the inevitable failure of diplomacy, thereby clearing the way for war between the United States and a nuclear power.

Dear God, I hope I'm wrong. But I believe with John Bolton as our National Security Advisor the US will enter into another war (a significant one, not just Yemeni airstrikes or some other limited action) by October 9th, 2019.

Curated for #informationwar (by @openparadigm)
Relevance: A Bellicose New Appointment
Our Purpose Even bigger than his conspiracy and warmongering, is that his temperament (vengeful, controlling aggressive, abusive is even worse than trump (who at least sometimes means well). With his office next door i predict either Trump or Bolton will be gone by summer

Bolton is an infamous lizard person. That said, I do think he is against the coup d'etat that is obviously trying to take out Trump and supports the legitimacy of Trump's presidency. Such a crazy world. I hope Trump hasn't bit off more than he can chew...