Deadpool 2 will not come to Venezuela

Hello friends and users of Steemit, today this is a message for me, its subject is not very pleasant, because I got up and I won with the news of the second most awaited movie this year of the Marvel universe, as it is Deadpool 2, not released in my country (Venezuela). Sure, it's a rumor, there's still a little more than a month to go before it is released, but from now on, the Cinex company (one of the largest television networks in the country), has published in its twitter account, that the tape is not released in that country. Reasons why Deadpool 2 will not tread on Venezuela? Cinex said that the reason is because the film producer 20th Century Fox, no longer has headquarters or partners in the country. I really do not believe that news, hopefully things will be resolved and we will not lose the happiness of seeing the sequel to one of Fox's most successful films in recent years. It should be noted that something similar happened with Logan's film, a little over a year ago.
It is unfortunate that the crisis that happens in my country, has already reached theaters, I think attending the weekends to see a movie, makes you escape for a few moments of so many things that bring you into society and now that we remove a long-awaited movie, it's like being told that santa will not come this December for Venezuela.
If you live here and you did not know or have another version of the event, leave it in the comments. What do you think if this begins to follow more often with other films like those of Disney?, Leave your opinions.

Greetings from the remotest of the world. 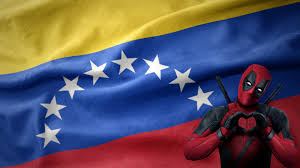 Submit
$0.38
10 votes
2
Authors get paid when people like you upvote their post.If you enjoyed what you read here, create your account today and start earning FREE STEEM!
Sort Order:
[-]
cryplectibles (68)  ·  2 years ago

I just watched this last night

Now am reading this about Deadpool 2, hopefully Fox or another company will come in and resolve this because it feels like if they don't find a way to allow you all to see it, then the bootleg industry will make sure people can see it.