Vegan Anarchy: The simple wisdom of the Golden Rule

There exists in nature a series of cosmic moral laws that govern man's behavior in the universe and, should he choose to discover such laws through reason and investigation, will understand his true place in the cosmos.

The one overarching law which encompasses all others is this: 'you reap whatever you sow'. From this, Jesus' spiritual teaching of the Golden Rule - do unto others as you would have them do unto you - has etched its way into the collective consciousness.

But how many people truly apply this law and abide by its wisdom in their everyday lives? There are, however, a small but growing number of freedom activists who are rejecting the current 'might makes right' social Darwinian philosophy in favor of sound, moral principles promulgated by the ancient prophets of the past. Anarchists, those revolutionaries who reject political authority in all its ugly forms and manifestations, have rediscovered these supreme moral laws and seek to educate the masses on their correct and proper application in modern-day society.

Anarchists live by the eternal non-aggression principle, understanding that human beings own themselves and and are endowed by Cosmic Intelligence with certain natural rights, that among these are 'life, liberty and the pursuit of happiness'. Any attempt by another individual or group of individuals (namely, 'government') to aggress against man's natural rights is a violation of moral law and will trigger a certain chain of consequential effects which, ultimately, significantly reduce the quality of life for all human beings on planet earth.

Anarchists understand that 'government', a fictitious entity created by parasitical control freaks, is directly opposed to the natural cosmic order due to its inherently coercive and non-consensual relationship with its citizens (subjects). Government's only function in society is to control and enslave, and has caused incalculable suffering and torment to hundreds of millions of human beings since its inception. War, genocide and slavery are continuously perpetuated by governments around the world and inadvertently carried out in the name of 'law and order', for the so-called 'greater good' of society.

There is, however, an even bigger monstrosity that has infected the minds of the vast majority of the human race and has caused suffering and death to, not millions, but hundreds of billions - even TRILLIONS - of sentient beings that inhabit this planet.

Unbeknownst to many (even the well-intentioned anarchists), our barbaric treatment of non-human animals is the biggest moral dilemma we face as a species. 'You reap whatever you sow'

Many human beings are aware of how this law operates on the physical plane, understanding that eating an abundance of junk food, smoking cigarettes, and consuming large quantities of alcohol will inevitably result in physical disease and sickness, but are ignorant of its much subtler manifestation on the mental and spiritual planes.

The first ever moral philosophers, as Bulgarian master Omraam Mikhael Aivanhov acknowledged in his many timeless works, were farmers. Before books were authored, human beings studied from the living book of nature and observed its many functions on the physical, mental and spiritual planes.

"Every farmer knows that if he plants a fig tree he will harvest figs not grapes, and that he will get apples and not pears from an apple tree," Mikhael stated. "Later, observing life around them and the behaviour and actions of men, they saw that the laws of agriculture applied to them as well: human beings can only reap what they have sown. In other words, if you behave with cruelty, selfishness and violence, sooner or later you will be paid back in the same coin of cruelty, selfishness and violence".

Every time an individual purchases animal products from the supermarket, he is - rather unconsciously - sowing the seeds of pain, murder and violence within his own psyche. Choosing to buy meat, cheese, milk and eggs from supermarkets causes unnecessary suffering and pain to a plethora of innocent creatures and, as a consequence, rebounds to the person who first initiated the violence. Collectively, as a species, our free will choice to enslave and mass-murder animals has boomeranged back round to us and subsequently cultivated the conditions of our own enslavement. For as long as we continue to rule and dominate animals, there always will be some form of imposed political authority and/or a violent ruling class.

We must, as a species, seek to embrace the simple wisdom of the Golden Rule in regard to both humans and animals - before it's too late. If you would not wish to be murdered, raped or violated, do not subject your fellow earthlings to the same treatment.

By choosing to reject political authority and adopt a vegan life style, human beings will sow the seeds of love, compassion and freedom for all sentient beings and will, in time, transform this war-torn world of slavery, scarcity and fear, to one of freedom, abundance and love.

Thanks for reading, 'In Lackech

Submit
$35.15
31 votes
11
Authors get paid when people like you upvote their post.If you enjoyed what you read here, create your account today and start earning FREE STEEM!
Sort Order:
[-]
bewustzijn (26)  ·  2 years ago

Thank you so much for this brilliant article. I have been vegan for almost a year now, and it has been the most impactful event on my life.

I've been struggling to put it in words. Everything you write is connecting with me. You really did a good effort putting it into words :)

I wish all my friends and family would read and understand this truth. It makes so much sense and yet so much people don't feel it (yet). It's so hard to connect with them sometimes. But on the other hand it's hard to blame them, because I was once like them. And also, the thing is, people can't seem to shake off the preachy religious connotation that comes with expressions like 'the truth' and 'I was once like them'.

It's such a delicate and taboo subject, at least that's what I experience with the people around me. People are so emotional about food and habits. I have to watch what I say all the time, pretending to not see what I see when they stuff their mouths, and all I want to do is yell it in their faces because it's so urgent.

On the other hand it's not at all hopeless, I notice some people are being influenced by my behaviour.

Ah well. Thanks again for sharing this with us.

Indeed, it is one of the most taboo and sensitive subjects there is. Thank you for posting such a well-thought out comment @bewustzijn

I totally identify with your words!

I really appreciate your brilliant view. Great new perspective about an issue near and dear to my heart. Thank you. I read your previous post also. I wanted to add this image to my comment there but was not sure how to do the whole image inserting thing since I am quite new to Steemit. Anyway here it is. This is an image of a cow that was RESCUED ON THE WAY TO THE SLAUGHTER HOUSE by a Buddhist Monk. You can see the truck in the background. THE COW IS SHOWING IT'S GRATITUDE BY BOWING IN FRONT OF THE MONK. 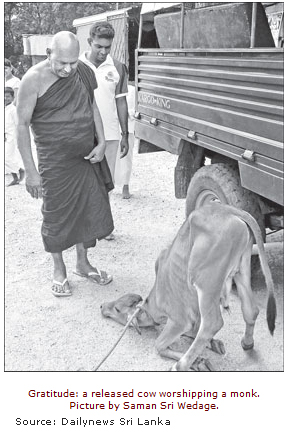 Wow, I can't believe I hadn't seen this picture before - thanks for sharing it! Thank you for reading my work and leaving such a positive comment @gabbingster

Thanks @cryptocurator, there's more to come.

I could not agree more! Perfect post that took the words right out of my mouth. If everyone read this post, the world would be a much better place. It's funny how they don't teach any of these values in "schools". The system promotes the exact opposite kind of behavior. Thanks for spreading awareness!

Indeed. I learned more in one month after dropping out of 'formal education' than I did in my 19-ish years of state-sponsored indoctrination.

Excellent post @mckeever, thanks to share.
Thank you for sharing our common interests and feel part of a large group that wants changes, peace, from the basic logic and integrity being coherent and makeking sense.