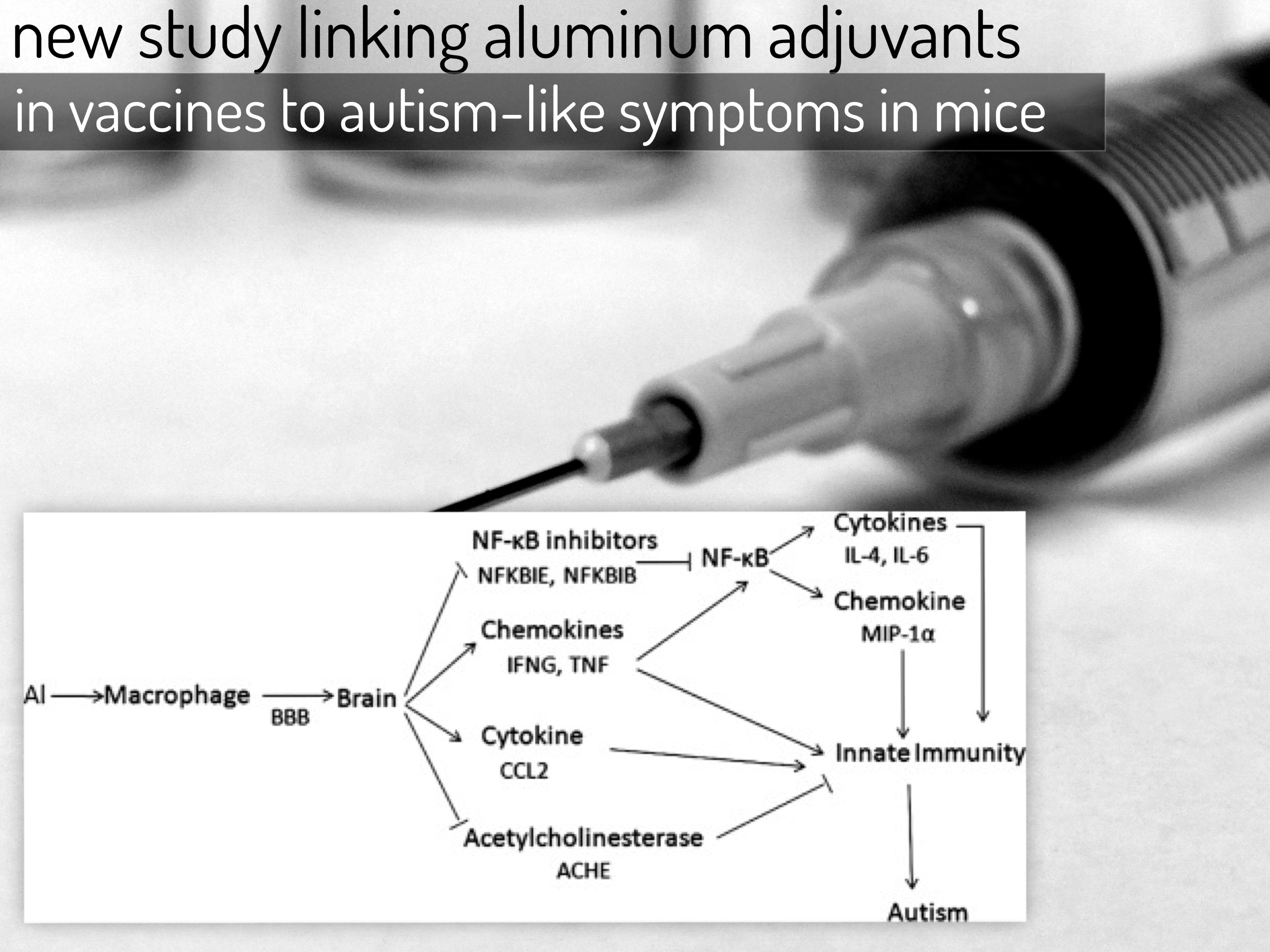 A new study has recently been published in the Journal of Inorganic Biochemistry (Vol 177), demonstrating that:

In short, the study finds that common aluminum adjuvants in vaccines traveled from the injection location in mice and crossed the blood-brain barrier.

This resulted in symptoms synonymous with those of Autism Spectrum Disorder in the human species. Also remarkable, is that the rate of these symptoms were markedly higher in the male mouse sample population, appearing to mirror patterns of Autism prevalence in humans, where prevalence is much higher in males:

When it comes to developmental disorders of the brain, men and women are not created equal. Decades of research have shown that males are at far greater risk for neurodevelopmental disorders such as autism spectrum disorder (ASD) than females. Boys, on average, are five times more likely to have autism than girls .

One acquaintance of mine online suggested that because the injections in the study were performed subcutaneously, and not in an intermuscular fashion, that the data is therefore irrelevant.

(EDIT: In the first edition of this post, I stated that the DTAP vaccine is administered subcutaneously. This was false. It is an intermuscularly injected vaccine.) Screenshot from the study.

Please read the study for yourself. As always, I am amused and suprised by the hot contestations of the "pro-science" crowd when data emerges which challenges their specific socio-political narrative.

One wouldn't think saying "more research is warranted" would cause such a hubbub, but alas, it does.

EDIT: A very interesting counterpoint post has been written critiquing this study and focusing on what could be some serious flaws in the methodology. I am remaining neutral and open, and researching further, but I think presenting counterpoint is important to the discussion. Here is the post by @irime:

Graham Smith is a Voluntaryist activist, creator, and peaceful parent residing in Niigata City, Japan. Graham runs the "Voluntary Japan" online initiative with a presence here on Steem, as well as Facebook and Twitter. (Hit me up so I can stop talking about myself in the third person!) Submit
$161.52
158 votes
55
Authors get paid when people like you upvote their post.If you enjoyed what you read here, create your account today and start earning FREE STEEM!
Sort Order:
[-]
zultaroky (44)  ·  2 years ago

Pretty scary stuff! I have never even had a flu shot or any other vaccine. Never trusted it and I believe in being natural. I would be so angry to find out me or a family member was effected by a vaccine like this! Great post

Good research Graham, though I am sure the trolls will come out. People need to research for themselves before making what could be a life alternating decision.

People need to research for themselves before making what could be a life alternating decision.

I suggest reviewing the information in the US Federal Vaccine Court. This court pays out billions a year to vaccine injured Americans and was set up so that manufacturers cannot be sued - providing them a layer of protection few industries enjoy.

Lots of good information here in their reports and statistics.

Autistic conditions can result from acute disseminated encephalomyelitis (ADEM) following MMR vaccination as held by the US Federal Court in the case of Bailey Banks. In his conclusion, US Federal Court Special Master Abell ruled that Petitioners had proven that the MMR had directly caused a brain inflammation illness called acute disseminated encephalomyelitis (ADEM) which, in turn, had caused the autism spectrum disorder PDD-NOS in the child:
The Court found that Bailey’s ADEM was both caused-in-fact and proximately caused by his vaccination. It is well-understood that the vaccination at issue can cause ADEM, and the Court found, based upon a full reading and hearing of the pertinent facts in this case, that it did actually cause the ADEM. Furthermore, Bailey’s ADEM was severe enough to cause lasting, residual damage, and retarded his developmental progress, which fits under the generalized heading of Pervasive Developmental Delay, or PDD [an autism spectrum disorder]. The Court found that Bailey would not have suffered this delay but for the administration of the MMR vaccine, and that this chain of causation was… a proximate sequence of cause and effect leading inexorably from vaccination to Pervasive Developmental Delay.
[Banks v. HHS (Case 02-0738V, 2007 U.S. Claims LEXIS 254, July 20, 2007)].

One wouldn't think saying "more research is warranted" would cause such a hubbub, but alas, it does.

I posted the other day about a study which linked H1N1 flu vaccine with increased risk of miscarriage and it had the same conclusion at the end.

It doesn't appear to matter how many studies such as this come out because I always get the same sorts of reply when I attempt to inform people.

They simply will not allow themselves to consider the possibility that they might have been misled about certain things, even when evidence of previous wrongdoing is provided.

It's similar to conversations I have with my girlfriend when I call into question the latest terror attack and that it might be a false flag. I don't understand the logic personally. How can you be convinced that Sandy Hook was a hoax for example yet not question every single event afterwards.

I saw that study! Crazy stuff. Same "triggered" reaction from the same friend. I think patience is key, but Jeeze if it doesn't take some folks a loooong time to come out of the programming. I guess I am still escaping, too, but once I had that "lightbulb" moment, there was really no turning back.

Did any of you read the following post? It basically just says that the article contains lots of manipulations/fabrications.. And even if that wasn't the case (but it is, I'm a cat and I'm better at using Photoshop that those "doctors" are 😹) there are not enough proves of the correlation between aluminum and autism.

I suggest to read the article in full.. Maybe it will open your minds

I saw this and am concerned as well. If those truly are "photoshopped" I am just wondering if this was a comparison portion of the study. I don't understand the purpose/intent of that section of the study. If it truly is fallacious I am glad to denounce it and still maintain that more research is warranted regarding vaccine safety based on hundreds of studies, reports, and documented side effects. This isn't about "anti-vax" vs. "vax" but about being scientific. I find the laughing face with the tears emoji to be indicative of this type of puerile attitude, but sadly that is what the "conversation" has become in so many ways.

Maybe you are right, we shouldn't laugh about this kind of arguments.. i was just trying to downplay it a bit.. I'm totally with you about being scientific on this.. in Italy we say "laugh to keep from crying" to express the discomfort about a topic that is important and still so badly dealt with that you feel like crying.. so you try to minimize by laughing.

Anyway, I'm sure the research keeps goin on with this topic.. the meaning of my sentence was that I'm sad that there are doctors the spread wrong informations that incentivate people to not use vaccines that helps in so many way and are therefore important

Thank you @kafkanarchy84 for bringing this issue forward. God bless.

Autism is a very serious mental condition, create difficulty in communicating with others... may be it develops from early childhood.. Right? I have come to know for the first time about "autism"from a Hindi movie".Thanks for sharing such an important topic and the inference of its research..

Waiting for this study to be peer reviewed, unless it has not yet been. I've seen an article about some errors in this study, but well...
Luckily you can always study more.

You all can check this out if you are interested.

This does seem fishy on the surface. Thank you. I will look into it. I don't have adequate knowledge at this point to know what is being done with, or what is meant by those slides, but the images certainly do seem duplicated. I will examine it further. Thank you.

I can't imagine we'll ever find a time we can find facts we are all happy with and it's the best like that. If everybody agrees we have found all the facts, we'll stop learning new.

This is so sad! Prayers for all of the victims of this.

thank you for sharing the results of a research. ready to say research will lead to fanfare. I personally think, that the benefits of the research done. with the existence of research we can know the problem which previously we do not know yet @kafkanarchy84

the evidence now related to why Autism occurs and when it usually occurs is existential. Just follow the rabbit hole of people affected.

Thanks for boosting up my knowledge with your post :)

I love this community where people like you share the truth especially when it comes to health. Great post. Have you ever checked @canadian-coconut she makes lots of posts about vaccines. Here is one of her posts https://steemit.com/vaccines/@canadian-coconut/parents-warning-other-parents-daughter-s-epilepsy-a-result-of-dtap-vaccine

Where do I sign up for this lucrative Ant-Vaccine Industry?

Thank you for sharing this very important information. Success for you @kafkanarchy84

Bring on the trolls! #vaccinesarepoison

This is great proof of what we knew already. Check out westonaprice.org

Very informative thanks for sharing...upvoted and followed you

Kudos to @kafkanarchy84 for adding the "EDIT" at the end with a link to the post by @irime.

Unfortunately, the post is too old for another EDIT pointing out that the paper by Shaw, Li, and Tomljenovic is due to be retracted.

The list of flaws and issues questioning the validity of this study found so far include:

Now the Journal of Inorganic Chemistry that published the paper is retracting it making this the second study on aluminum by the authors that will have been retracted.

Shaw, one of the authors confirmed the editing of images but claimed he didn't know how that happen. He also claimed that the original data for the study is missing, taken by another study author Li who has left the lab where it was done. She agreed to the retraction but denied any data had been changed or was "amiss". The original data is still AWOL.