There's many different reasons why someone would want to delegate Steem Power. 25% of my Steem Power is currently delegated between MSP (to give the love back received from them in my early days), a communal account (in support of growing the Manila community), and a guild (to support their cause of supporting users producing quality content). There are users who are delegating their purchased Steem Power to voting bots for profit, some are delegating to friends and family member to give them some boosts in their first few months in the platform, others are using delegation as prizes for various contests.

First Step - Parts of the Delegation URL to take note of:

This is a conversion tool, for this post it will be utilized to get the Steem-VEST conversion, just indicate the amount on Steem Power you wish to delegate in the field below "STEEM:" , and it will give you the conversion in Vest like shown below. This tool can also be used for Steem/SBD conversion, and tracking current prices of Steem and SBD in different exchanges. 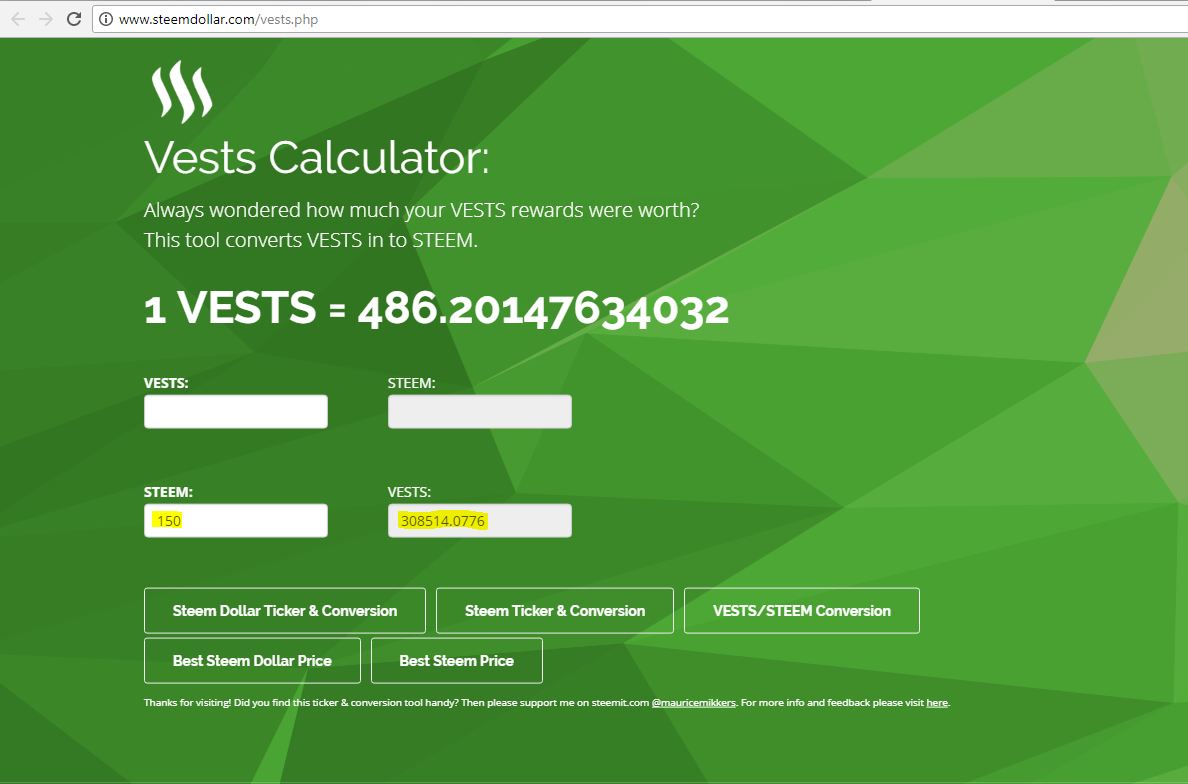 For this tutorial, the URL's been updated to these: delegator=steemitph, delegatee=steemph.manila, vesting_shares=308514.077600 (note that it is important to use six decimal places even if the numbers are all zeroes) After clicking continue, the tool will ask you to sign in. Note: there may be risks involve in using your passwords. There are other tools that can be used for delegating if you are not comfortable using your password. I find this tool very easy to use however, and SteemConnect based on experience has been safe to use. We've been using SteemConnect to log in to Utopian.io, Busy.org, and many other platforms connected to the Steem blockchain. The other tools for delegation requires some more technical knowledge, that I currently do not have.

After signing in, the tool will give you confirmation page that will say "The operation has been successfully broadcasted" as shown in the photo below: 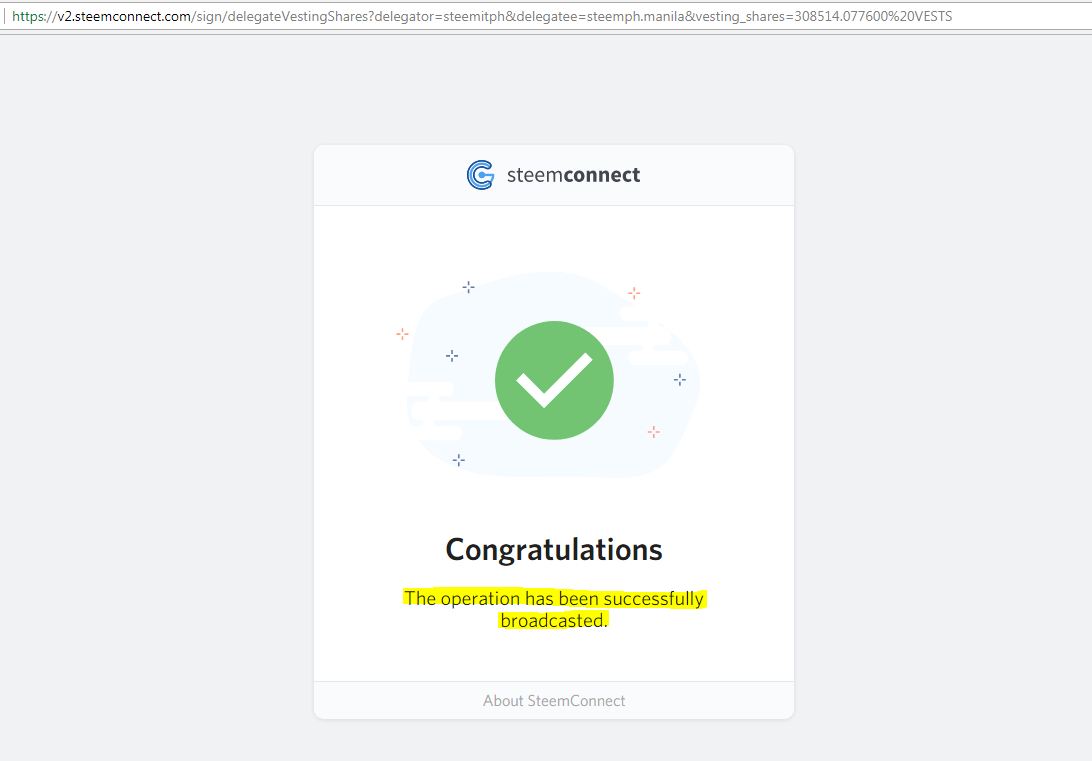 As shown in the below photo, Checking in steemd.com we can confirm that the transaction went through.

We have just completed a Steem Power delegation.

We will be using the same delegation URL for this, the only critical step involved in this process is figuring out what the vest equivalent is for the new Steem Power count you wish to update existing delegation with. Like in the first process, we will use the Vest Calculator. I updated the last bit of the earlier URL used to show vesting_shares=205403.393000%20VESTS, it is important to note that the the figure next to vesting_shares= needs to have 6 decimal places even if the last digits are all 0. After clicking on continue, it will ask you to log in, and post that will give confirmation that the operation has been broadcasted as shown below. The 50 undelegated Steem Power from this action however will take 7 days to return to the delegator.

In this example I will be removing an earlier 100 Steem Power delegation . This is still going to use the same delegation URL, updating the last bit with vesting_shares=000000.00000%20VESTS I hope this tutorial helps Steemians who've been thinking about delegating Steem Power for causes they want to support, and those who wish to undelegate their Steem Power from an earlier delegation for their own use, or delegating to another cause. The Steem Power I undelegated, and reduced delegation to the communal account will be reallocated to an upvote bot supporting Filipino Steemians. I will wait for the Steem Power to go back to my account for seven days however before I do that, to minimize the impact on my influence in the platform.

Hey @steemitph I am @utopian-io. I have just super-voted you at 10% Power!

Vote on this contribution has been fixed since the bot voted unfair in comparison to other similar contributions.

This is very good so that people who had the question how to delegate and undelegate STEEM power can get an easy walkthrough with those links which I used myself recently. @steemitph

Hey Arnold, thanks for your support and appreciation.

this tutorial is very detailed i can understand! thank you for sharing information!

Glad you liked it @yandot.

Informative, thanks for sharing this. :)

I realized that I still have a lot to learn here in Steemit. this is a new knowledge for me. Thanks for sharing. I might be able to use this sooner or later 😊

Same here @enjieneer, I too still have so much to learn. It is amazing how this platform makes learning rewarding :-)

i feel like more people need to see this - especially the newer people ; love this post !
im going to resteem it just so that its in my own blog to find later on incase i need to go over something again ; as well as the followers i have - great stuff !

while this is understandable - if someone understands enough they can buy it ; or if someone is getting just enough to be able to do so, im not talking about the minnows - i mean the people who are only just beginning the delegation possess itself .

Yeash some just come with enough money to invest too. Just talking about the users like me :)👍🏻

well im always looking for information to share all the time ; which is another reason i have resteemed this - so i can revisit this again ; and not only use some of the information on this but a few others as well as collaborating with others to get a community of people helping the little guys gather the information needed to be successful in the platform .
im fairly new and dont have too much to actually start the delegation myself - although i will for sure be needing this in the future .
i have seen people send SBD to others just for information ; not to mention the shares and upvotes and followers ect ect .
im hoping to gather as many as i can and make one large post about how many are actually out there and how to use them properly - and when and what posts ; ect ect .
i have been thinking of making an investment ; but ill have to do more research myself ^.^

Thanks for your support @endymionoriax. Love it that you found value in my work. There are tons I still need to learn myself. I am enjoying this journey through learning and earning some at the same time. I wish you success in your Steemit journey. Stay awesome and Steem on!

nice..Hello good Morning here bro and Also tell me how I can earn good.And tell me the way you are working.Taking a good hold of you in the same way.I'm new to everything I do not know so much to tell me everything. Thank You.

Thank you for the contributio. @steemitph.
Can you remove unnecessary mentions stated above and below part of your posts. Reply to this so that I can review it again. Thanks.
[utopian-moderator]

Thanks for taking a look. Removed the mentions.

Thank you @steemitph. It has been approved.

Hi! im searching to find out if its necessary to remove a loan that I delegated out (*please update your delegation has appeared on my wallet notifications list), or if theres a button to click just to keep it rolling so to say, instead of stopping and then having the 7 day cool down?

Hi,
About a year ago I delegated most of my voting power to utopian. Since I have not received the agreed reward for about 10 months, I am considering undelagating it. But I sadly find out the page I used to delegate and modify the delegation does not seem to be available. The links are redirected to a new home page named utopian colony, and I do not find any sponsors page there.
https://utopian.io/sponsors
I will very much appreciate any advice on this matter. Thanks i advance for your help and time.

Hello @steemitph. I'm new to the Steemit platform and STEEM in general. Learning about steemconnect now. Very comprehensive article you have here. But, just wondering if this is still valid. Still trying to figure things out so I'm glad for any information I can get about steemconnect. :)