I know things are looking stale on the Gridcoin development side, but we have been working to add stability to the wallet and are now in the final test phase of Gridcoin 3.7.0.0 which will be a mandatory upgrade. There is no set release date yet other than as there are two more changes I want to include and test to further improve the forking situation when reorganizing. When released we will set a V9 trigger height roughly 2 weeks beyond release date to give exchanges time to react. After that the fork fixes will kick in and we can start removing the obsolete tally code.

While there are many, many more features and fixes done, I will try to cover some of the larger ones. Please see closed github pull requests for a hard to read but complete list.

We have had a lot of problems with wallets disagreeing on rewards and taking different routes on the chain. That is, different forks. We believe that the reason for this is that wallets have different views on how much each user is owed due to the way the nodes collect historical rewards and magnitudes. V9 blocks introduced in version 3.7.0.0 change this with two important fixes:

These changes solve two very fork happy and hard to debug issues. The caveat is that it may not solve all fork issues, just the ones we have managed to track down.

Gridcoin has a mechanism which allows clients to request blocks in bursts to improve the synchronization speed. Roughly speaking, the nodes sending block metadata will save information about the last block information sent to the syncing node, making that block a sentry. Whenever the syncing client requests the sentry block another burst of block metadata is sent along with it. 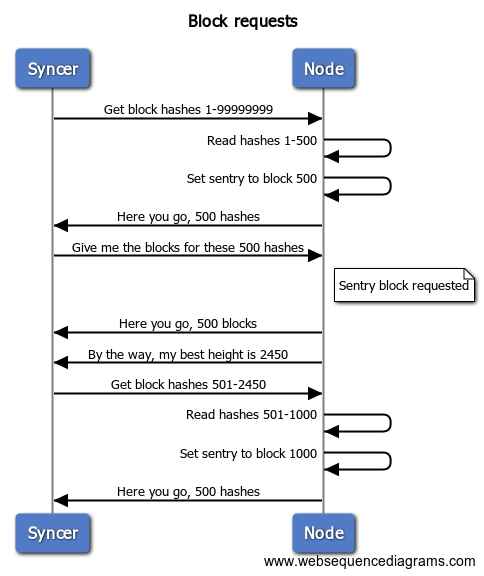 This repeats until the the syncer stops requesting blocks or until the node does not have any more blocks to send. Note: Image is not entirely true as the communication is done with hashes, not heights. The basic flow still applies.

A while ago this block burst size was changed from 500 to 1000 blocks which caused the burst size to exceed the maximum allowed transmission size, so the syncing node never got information about the sentry block. You would see that as hickups in the chain synchronization. Your node would receive a burst of blocks, pause for a long time, receive the next burst and so on. The pause bug is fixed and the pauses are now only when the remote end loads its blocks from disk.

This is going to be a bit technical but I'll try to explain it as well as I can.

In computer programming it is often beneficial to do things in parallel to avoid making the program feel sluggish. For example, you do not want the user interface to freeze while the program is processing a burst of received blocks. The easiest way to solve this is to use threads. This also has the benefit of utilizing more cores on the CPU. However, using threads is not free. Since there are now multiple data produces and consumers you have to make sure that they are not manipulating data simultaneously. The way you solve this is by using locks.
Each thread which wants to read or write shared data will have to wait for a lock to be released before they can acquire it themselves. One single lock won't bring down a software on its own. The devious behavior come when you have multiple locks and aquire the locks in different order.

In Gridcoin we use a lot of locks for protecting various different resources. In one recent issue two particular locks, cs_Main and cs_vSend were involved in threads aquiring them in different order. Even though there is a very small risk that the threads deadlock, the order has now been changed so the deadlock problem in this case is eliminated. If we are right about this deadlock it would explain why Windows wallets are more prone to running into this issue than Linux wallets. The reason is that Windows wallets hold the cs_Main lock while performing NeuralNet operations before they also take the cs_vSend lock. Since the NeuralNet operation can take several seconds they are way more likely to deadlock. The way this manifests itself is a user interface freeze.

Note that since we have not been able to reproduce the Windows freezes in a debugger it is very likely that the problem remains. Only time will tell. Threading and locks are tricky business at this source magnitude so we cannot assure that all the deadlocks are gone, but it should at least be better now.

Windows users have been plagued with silent shutdowns for a while now. We tracked down a very likely cause to where the NeuralNet started scraping the BOINC statistics data while a scaping operation was already in progress. The first thing the scraper does is to delete the currently downloaded statistic files. In this case the files were obliterated right under the feet of the first scrape operation, casuing it to lay down and die.

A lot has been done to improve the overall performance of the wallet. Existing code has been tweaked and optimized while some obsolete code has been removed, opening up for further improvements.

Following changes in the Bitcoin base we have changed the underlying data structure holding blocks to a more efficient one. This will consume around 1-1.5% more memory but every time we access a block in the existing chain we save a good amount of CPU cycles. This will especially affect chain loading but the improvement ripples throughout the entire code base.

To put some numbers to it, after syncing the chain on a Raspberry Pi 3 the old implementation spent 46% of the total execution time querying the chain for blocks. This is now down to 13%.

We previously had mechanisms for relaying checkpoints between nodes. This was not needed as checkpoints are hard coded in the client, something that is good enough for its purpose. By removing the relaying we could greatly simplify the checkpoint validations which will cause the nodes to use a lot less CPU when processing blocks. This is especially noticeble when synchronizing the chain, something which should be a lot faster now.

The code responsible for converting floating point values to and from strings has been greatly simplified and gained a large performance boost. As in the previous sync test on the Pi3, we did 22 million calls to cdbl (round a double contained in a string), spending 18% of the total execution time. Unfortunately I didn't keep the aftermath numbers, but it is much, much better now.

Many of you are probably wondering where the heck the rebranding changes have gone. Don't worry, we intentinally postponed the UI changes in favor of focusing on only the stability. The rebranding will be done in 3.7.1.0 as a leisure update.

Wow! These changes sure sent the price of GridCoin up.

It might feel like things have been stale on the dev side from your perspective as a developer, but oh man do I disagree. The past 9 months have seen the desperately needed Tender Love and Care put into the project. From bug fixes to code axing to the number of github contributions and contributors skyrocketing... us non-devs see and know the work you and the others are doing. Moreover, 3.7.0.0 looks like we're moving past the TLC stage and into a phase where improvements are coming. I can't wait!... but I can wait because testing is critical. = )

This plus the improvements on the communication and organization side of development, plus all the enthusiasm and work being put into marketing, outreach, and community, make me very excited for 2018 Gridcoin.

Thank you for everything @ravonn and the rest of the developers!

This and the branding/autotools changes in 3.7.1 will set up us in a great spot in terms of wallet stability. Things should calm down and it will be much easier to continue in the path of the poll results.

@jringo hits the spot - it has been a great 2017 given ALL the changes and challenges we have undergone. Looking forward to a better 2018

Looks forward to gridcoin crushing some nice projects to help better the world :)

Awesome level of detail! Please submit any further updates through the development category, as your posts and work contributions have vastly outgrown the blog category.

Hey @ravonn I am @utopian-io. I have just upvoted you!

Yes great work indeed! But there was a lot going on behind the apparent stale appearance. Thank you Devs for your major contribution in putting GRC on a path of success!

Thanks again for all your effort @ravonn and the entire dev team, here is to a magnificent 2018!

Congratulations @ravonn! You have completed some achievement on Steemit and have been rewarded with new badge(s) :

Thanks for explaining the changes so well. Looking forward to the improved wallet stability!

Waw
Upvote me at
https://steemit.com/steemit/@mahikaler/how-to-deal-with-too-much-work