mirabelgeorge (47)in #untalented • 3 years ago 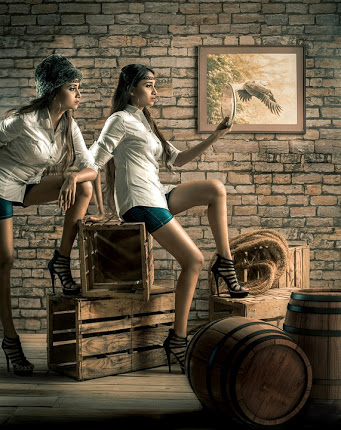 Image was gotten from Pixabay

As I brewed my coffee, I thought of how to confront Charlotte without her flaring up. We hadn't chatted since my return from the store yesterday. She looked so guilty and kept to herself most of the time that I felt pity for her. I had caught her staring at me so many times, prolly thinking of an explanation.

My text message alert tone jerked me back to reality, making me pour my coffee on my thighs. I hissed in pains. The text was from Adley. "I need to see you in my room, it's urgent".

I took my coffee with me to distract myself while he gave his excuses.
He was still in his pyjamas curled up under his grey duvet. His room was neat and well arranged, with his headset by his pillow; Adley is crazy about music, so am I. A red checkered shirt hanging on his wardrobe drew my attention and I fixed my gaze on it, more reason because I have been avoiding looking at him.

"Amelia, you looking around my room like it's your first time being here. Could you sit?"
It was my first time being in Adley's room standing, I swore the room smelt feminine fragrance.
"Are you hiding a girl in here Adley?" I sniffed and sipped on my coffee which was almost getting cold.
"No?" he pulled off his duvet and rubbed his hair.
I don't blame the girls for not taking their eyes off him. Adley had the best features I ever saw in a guy: black curly hair, pink lips, small eyes, straight nose. If he wasn't my brother, I would fall for him too.

"Listen Amelia, I know what you thinking, I was gonna text you once that girl walked into my room but...."
"But what Adley? Why not keep that lie to yourself huh?"
"This girl walked into my room in a revealing gown and I thought she wanted something" he continued..
"So she just barged in your room without knocking?"
"Nah, she did knock and said she wanted to light her cigar. I helped her with it, then she begged to stay because you ain't good with her smoking in your room. I obliged and she started smoking and being all seductive, you know puffing the shit and winking at me. I..."
"Why didn't you ask her to leave?" I cut him short because I wasn't buying his story.
"Please just listen to me till I'm done, then you can be a judge"

I made an angle 90 degrees turn from him. That was total disrespect and I knew. He adjusted and stood in front of me, continuing his story.

"I wasn't comfortable with the scenario so I thought of going to shower....."

At this point, I was already mad at him for opting to go shower. He could have left the room and met me in the kitchen.

"I pulled my shirt, had just my pants on and walked to the bathroom. I spent 5 minutes in shower that would have taken me just 2 minutes maximum because I was trying to make her leave. I didn't wanna be rude Amelia, she's our guest. When I was out of the bathroom, she was there dropping the remains of her cigar in the ash tray, then asked me where the waste bin was, in her tinniest voice".

That's the thing about Charlotte. She tunes up the voice when she wants to obtain a favor from you or wants to play Miss Innocent"

"At this point, I expected her to be gone but she stayed and kept looking at me. I faced the mirror to brush my hair, and she came after me, rubbing my back. I ignored and continued until the caress became intense and I pushed her off. Her tits were pointing at me, I could imagine how ho*ny and wet she was but there was nothing I could do because she wasn't attractive to me. By the way, she's your friend and I can't screw her! Next, she started touching herself and moaning my name and that was when you knocked. I did nothing with her!" he finished off his explanations with a snap of his fingers.

"Such a cool story Adley" I told him,clapping my hands. I wasn't impressed.
"Well, that's how it went and you should be careful about that girl"
"Really? Now you want me to be careful? But you always said you liked her"
"Yeah I did and still do but she's a chameleon. Just be careful" he gave me a pat on the back.

"Adley?" I was becoming emotional watching how hurt he was because I didn't believe him.
"Yeah?"
"Thank you for being disciplined"
"Cool, and that reminds me too about Sasha, we got nothing. She's got a major crush on me and asked to visit. That was all".
"That's fine" I hugged him and blinked back some tears.

It's been a while I heard from Benton, even though we always did text and Facetime. I had forgiven Charlotte again because our friendship meant a lot to me. She was my best friend and I intend to keep it that way. To ease the tension between us, we talked about most of our school mates and those that were married; she told me she doesn't want to be associated with any of them and she avoided them like a plague. We talked about Indiana who was close to her then and she described how the girl liked her pictures on Instagram but was on private so she didn't want to follow her. We talked about her ex boyfriend, who she said was a fraudster and a womanizer, then a couple of her other friends. She told me about one that is mad at her because she lost her father and she didn't check up on her.

"Let her stay mad. I wasn't the one that killed her father" she had said.
I found the statement harsh, and it made me wonder if Charlotte had a heart to understand when someone is hurting. I didn't wanna think she was selfish, she was still perfect to me.

Few minutes later, she was bored and wanted to be out so I decided to call Benton, instead of driving out and going somewhere just the two of us and have some random guys come sit with us. Benton might have a friend who would be interested in Charlotte.

I told Charlotte to have her bath first while I select our wears then I would shower after her. Ben had agreed to the date and would be at my place by 3 p.m. It was 1 p.m. already.

Charlotte was out of the shower after 40 minutes. She spends most of her time in the loo smoking and taking a dump before shower.

I was undressed from impatience of waiting too long for her and was thinking of using Adley's bathroom before she stepped out. She swallowed hard when she saw me, as if something triggered it and got her eyes fixed on my b**bs; I was embarrassed! It wasn't her first time seeing me naked though.
"Hey you good?" I asked
"Sure" she winked at me and walked past me to the bed, looking for the TV remote which was her favorite thing to do: watching Channel E. We often play-fight for the remote as I prefer watching Little Women of L.A.
"Please dress up fast" I hurried to the bathroom.

While in shower, I tried not to make the thoughts running in my head important. Charlotte is crazy so she probably trying to mess with me. I lathered my body, scrubbed and rinsed off. Walked out of the bath and dried my body. I put the towel back at it's place, then grabbed the smaller one and wrapped it round my hair, pushed open the door, even though it wasn't entirely shut; and there Charlotte was, still naked. I was getting furious; I didn't want to keep Benton waiting.

My friend was being nonchalant, and she was the reason I called him. I thought of canceling the date but I really wanted to see Ben and I was determined go alone if Charlotte wasn't game.

Ugh! The fear of leaving her alone with Adley hit me! I don't know what would happen next...

"Hey Charly, you don't want to go nowhere? Please let me know" I asked, trying so hard to conceal my anger.
"Of course I wanna" She said, slowly walking towards me. She had the confidence I'd never seen before and it scared me.
"Do you want some cake?" She asked touching my lips....

wow!...nice piece and captivating as well,hope that's not the end