Properties and Structure of black hole

The no-hair theorem states that, once it achieves a stable condition after formation, a black hole has only three independent physical properties: mass ,
charge, and angular momentum .[34] Any two black holes that share the same values for these properties, or parameters, are indistinguishable according to classical (i.e. non-
quantum ) mechanics.
These properties are special because they are visible from outside a black hole. For example, a charged black hole repels other like charges just like any other charged object. Similarly, the total mass inside a sphere containing a black hole can be found by using the gravitational analog of Gauss's law , the
ADM mass , far away from the black hole. [clarification needed] [42] Likewise, the angular momentum can be measured from far away using frame dragging by the gravitomagnetic field .[ clarification needed]
When an object falls into a black hole, any information about the shape of the object or distribution of charge on it is evenly distributed along the horizon of the black hole, and is lost to outside observers. The behavior of the horizon in this situation is a dissipative system that is closely analogous to that of a conductive stretchy membrane with friction and electrical resistance —the
membrane paradigm .[43] This is different from other field theories such as electromagnetism, which do not have any friction or resistivity at the microscopic level, because they are
time-reversible . Because a black hole eventually achieves a stable state with only three parameters, there is no way to avoid losing information about the initial conditions: the gravitational and electric fields of a black hole give very little information about what went in. The information that is lost includes every quantity that cannot be measured far away from the black hole horizon, including approximately conserved
quantum numbers such as the total
baryon number and lepton number . This behavior is so puzzling that it has been called the black hole information loss paradox .[44][45]
Physical properties
The simplest static black holes have mass but neither electric charge nor angular momentum. These black holes are often referred to as Schwarzschild black holes after Karl Schwarzschild who discovered this solution in 1916. [13] According to Birkhoff's theorem , it is the only vacuum solution that is spherically symmetric. [46] This means that there is no observable difference between the gravitational field of such a black hole and that of any other spherical object of the same mass. The popular notion of a black hole "sucking in everything" in its surroundings is therefore only correct near a black hole's horizon; far away, the external gravitational field is identical to that of any other body of the same mass. [47]
Solutions describing more general black holes also exist. Non-rotating charged black holes are described by the
Reissner–Nordström metric , while the
Kerr metric describes a non-charged
rotating black hole . The most general
stationary black hole solution known is the Kerr–Newman metric , which describes a black hole with both charge and angular momentum. [48]
While the mass of a black hole can take any positive value, the charge and angular momentum are constrained by the mass. In Planck units , the total electric charge Q and the total angular momentum J are expected to satisfy
for a black hole of mass M. Black holes satisfying this inequality are called
extremal. Solutions of Einstein's equations that violate this inequality exist, but they do not possess an event horizon. These solutions have so-called
naked singularities that can be observed from the outside, and hence are deemed
unphysical. The cosmic censorship hypothesis rules out the formation of such singularities, when they are created through the gravitational collapse of
realistic matter .[2] This is supported by numerical simulations. [49]
Due to the relatively large strength of the
electromagnetic force, black holes forming from the collapse of stars are expected to retain the nearly neutral charge of the star. Rotation, however, is expected to be a common feature of compact objects. The black-hole candidate binary X-ray source GRS 1915+105 [50] appears to have an angular momentum near the maximum allowed value. 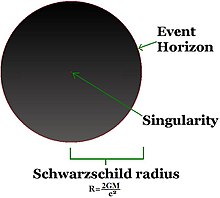