A unique galaxy loaded with hard-to-produce heavy elements sheds light on stellar histories and galactic evolution. The Kavli Foundation hosted a Q&A with three astronomers to probe this discovery.

Researchers have solved a 60-year-old mystery regarding the origin of the heaviest elements in nature, conveyed in the faint starlight from a distant dwarf galaxy.
Most of the chemical elements, composing everything from planets to paramecia, are forged by the nuclear furnaces in stars like the Sun. But the cosmic wellspring for a certain set of heavy, often valuable elements like gold, silver, lead and uranium, has long evaded scientists.
Astronomers studying a galaxy called Reticulum II have just discovered that its stars contain whopping amounts of these metals — collectively known as "r-process" elements. (See
"What is the R-Process?" ) Of the 10 dwarf galaxies that have been similarly studied so far, only Reticulum II bears such strong chemical signatures. The finding suggests some unusual event took place billions of years ago that created ample amounts of heavy elements and then strew them throughout the galaxy's reservoir of gas and dust. This r-process-enriched material then went on to form Reticulum II's standout stars.
Based on a new study, from a team of researchers at the Kavli Institute at the Massachusetts Institute of Technology , the unusual event in Reticulum II was likely the collision of two, ultra-dense objects called neutron stars. Scientists have hypothesized for decades that these collisions could serve as a primary source for r-process elements, yet the idea had lacked solid observational evidence. Now armed with this information, scientists can further hope to retrace the histories of galaxies based on the contents of their stars, in effect conducting "stellar archeology."
Courtesy of The Kavli Foundation, Sky & Telescope is featuring an in-depth Q&A with three astrophysicists on how this discovery can unlock clues to galactic evolution. The participants were:
Alexander Ji – is a graduate student in physics at the Massachusetts Institute of Technology (MIT) and a member of the MIT Kavli Institute for Astrophysics and Space Research (MKI). He is lead author of a paper in Nature describing this discovery.
Anna Frebel – is the Silverman Family Career Development Assistant Professor in the Department of Physics at MIT and also a member of MKI. Frebel is Ji's advisor and coauthored the
Nature paper. Her work delves into the chemical and physical conditions of the early universe as conveyed by the oldest stars.
Enrico Ramirez-Ruiz – is a Professor of Astronomy and Astrophysics at the University of California, Santa Cruz. His research explores violent events in the universe, including the mergers of neutron stars and their role in generating r-process elements.
The following is an edited transcript of The Kavli Foundation's roundtable discussion with these three astronomers. The participants have been provided the opportunity to amend or edit their remarks.
THE KAVLI FOUNDATION: What was your reaction to discovering an abundance of heavy elements in the stars in the galaxy called Reticulum II?
ALEX JI : I had spent some time looking at stars in other galaxies like this, and in every one of those, the content of this type of element – which we call r-process elements – was very low. So we went into this whole project thinking we would get very low detections as well with this galaxy. When we read off the r-process content of that first star in our telescope, it just looked wrong, like it could not have come out of this galaxy! I spent a long time making sure the telescope was pointed at the right star. Then I called Anna — actually, I had to wake her up, it was 3 a.m. — and we started doing instrument checks to make sure we were looking at the right thing. It turns out we were.
ANNA FREBEL : It was quite funny, because usually when I get a call in the middle of the night from someone at the telescope, it means something really bad has happened! [Laughter] In this case, we were all super-excited because Alex had found something in the data that was really unexpected and also was a smoking gun. We pretty quickly confirmed that at least that first star he was looking at really had all these heavy elements in rather large quantities.
Then another star showed the same kind of signature. I was like, "Oh my god—we've hit the lottery . . . twice!" We would have been happy walking away with just one awesome star, and then it turned into two, then into three, and four, five and so forth. The universe had thrown us a really big bone!
ENRICO RAMIREZ-RUIZ : I've been working on neutron star mergers for a while, so I was extremely excited to see Alex and Anna's results. Their study is indeed a smoking gun that exotic neutron star mergers were occurring very early in the history of this particular dwarf galaxy, and for that matter likely in many other small galaxies. Neutron star mergers are therefore probably responsible for the bulk of the precious substances we call r-process elements throughout the universe. 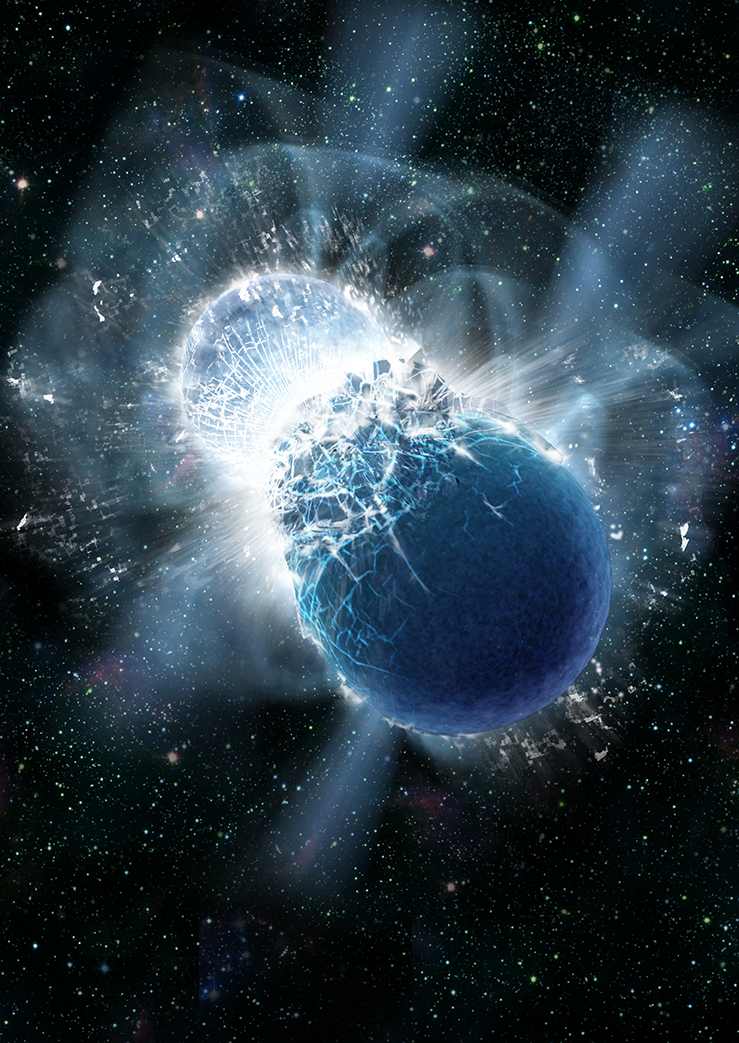