After enduring a grueling 22 hour bus ride through some of the steepest and sketchiest terrain I have ever encountered, we arrived in Cuzco Friday afternoon. I wish that I could tell you that this easily motion sick gringo did not barf on the bus, but unfortunately no such miracle occurred. I will spare you the details, but rest assured knowing at this point in the game I'm prepared, as I get motion sickness just about anytime I'm off the ground.

It didn't help that I couldn't keep my eyes off the massive mountains. Yet, I am not sure what was worse: watching the canyons as we barreled down them or closing my eyes and praying while slithering back up the two lane highway to another peak. Both ascents and descents were impressive, though, as the driver took turns with an audacity only possible to one who had a photographic memory of the entire route or to one who was sleeping. Nonetheless, we arrived in one piece, and found our way to Cuzco's Plaza del Arms and the Cathedral you see behind me there.

The architecture here is like the mountains - sovereign and austere. Both seem to be watching over all the buzz and activity with curious yet calm eyes. There is quite a powerful combination of energy, an amalgam of century old cultures both indigenous and colonial. Cuzco is huge! In many ways it's as big as the hills that it's nestled in, only it's vastness is in layers and lateral mass.

We are planning on spending about a week here. I'll keep y'all updated on what we see. Thanks for following along. 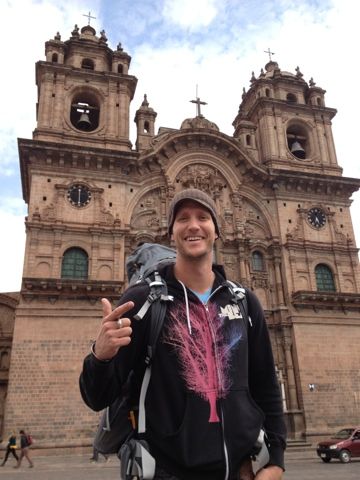