Hi! I'm Stephan and I blog about my travels around the world! follow me so you can always see my latest update in your feed!

Hello, fellow Steemians. Have you ever heard of Khao Sok National Park in Thailand? This park consist out of a big lake (Cheow Lan Lake) with numerous green limestone cliffs. The lake itself is surrounded by one of the oldest rainforests in the world. A trip to this park will certainly be a, or maybe even be, the highlight of your visit to Thailand. 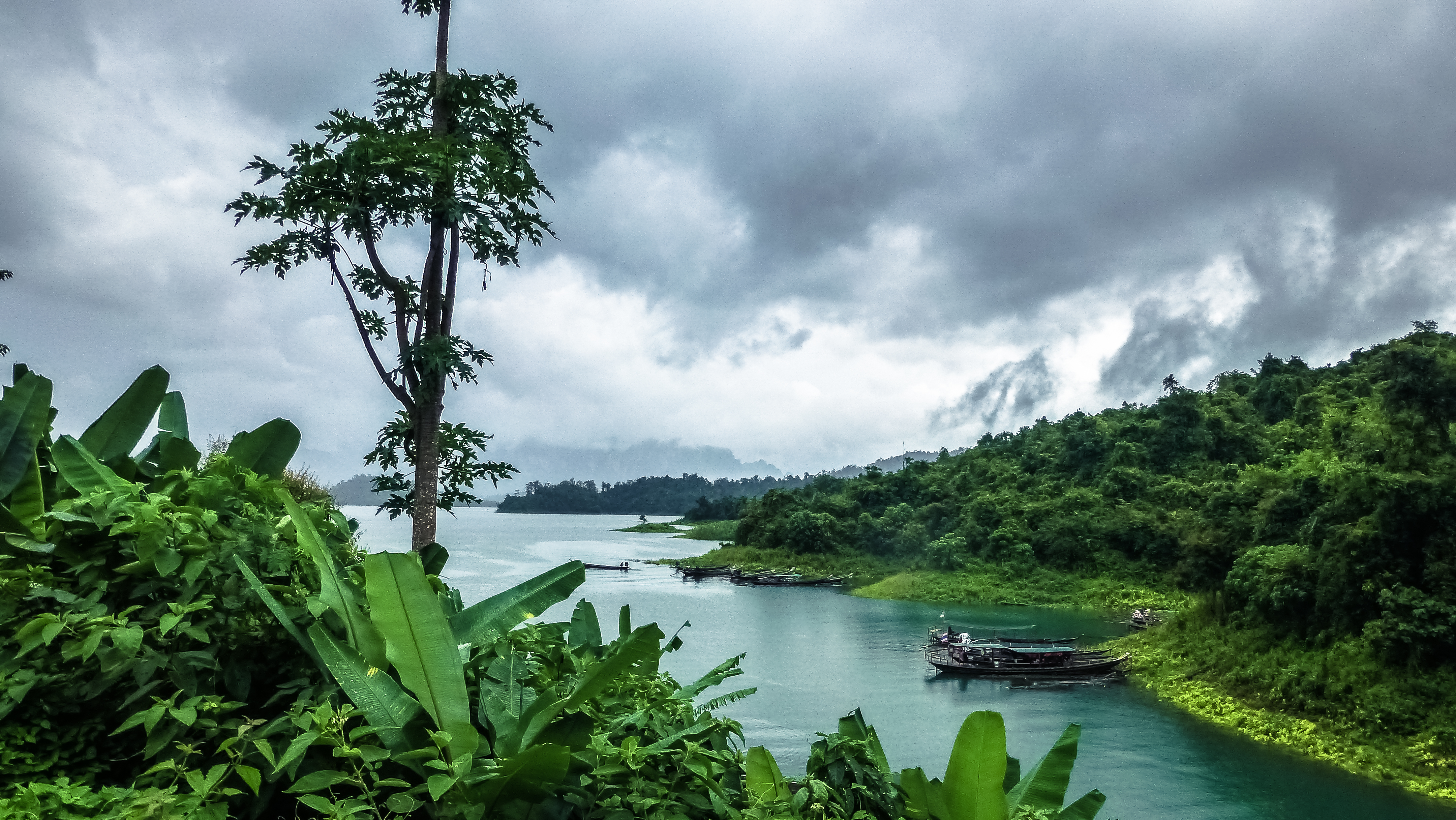 Khao Sok NP is located 100 kilometers west of Surat Thani (which is south of the Gulf of Thailand). The easiest way to reach the park is by bus from Surat Thani. Most of these buses will take you to a small village, which is one of the two entrances to the park. In the village, you will find most of the parks' accommodations. We booked a night at Khao Sok Jungle Hut which is known as a deluxe budget accommodation. Sounds a bit conflicting right ;D Anyway, the accommodation was good enough, although some people woke up due to apes banging on the windows, so be aware. Luckily they spared us.

Position of the park on the map 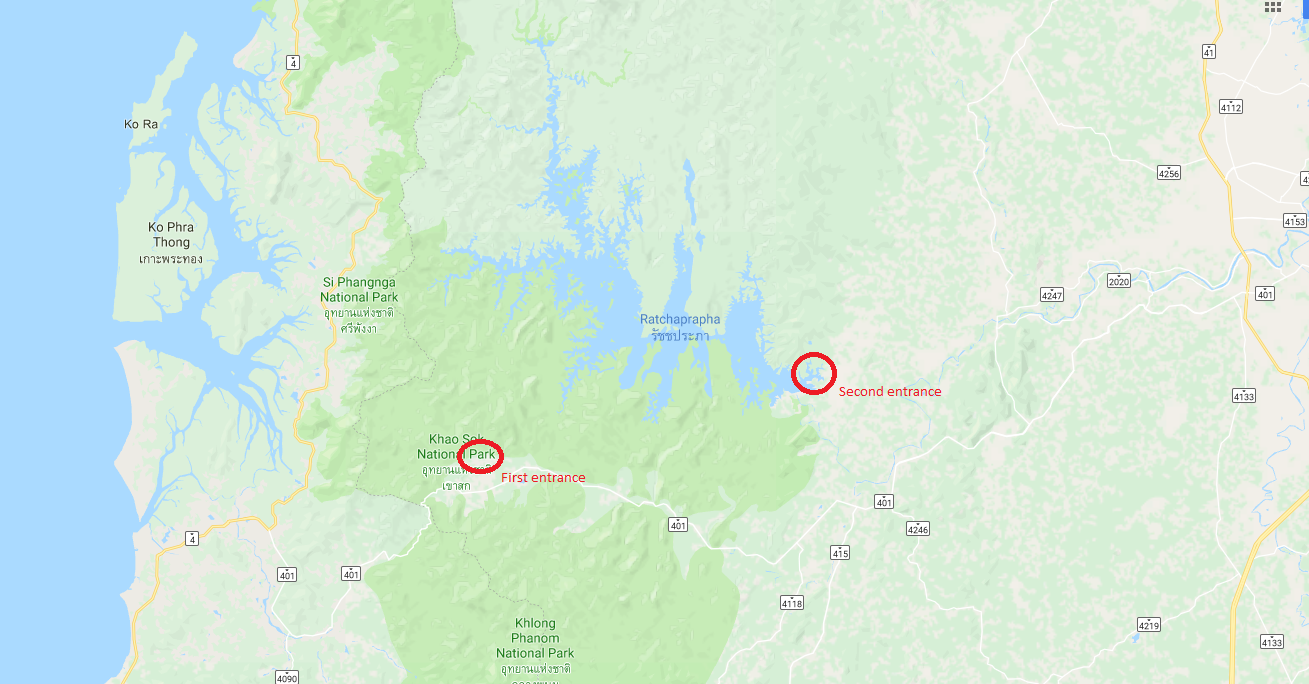 One of the best ways to see the park is by booking an overnight tour. We booked this tour at our accommodation and via a bus, we were brought to the Ratchaprapha pier. This pier is 60 kilometers away from the town and is the other entrance to the park. By using the entrance near the town you can do many different hikes (even some on your own). The entrance at the pier is used to get into the park via the water. The whole park is huge (739 km²) so don't expect to see all of it on one tour ;)

Sadly, when we arrived at the pier it was raining. Since it was August, we took into account that this could happen because from Juni until October its rain-season in this part of Thailand. From the pier, we grabbed a long-tail boat and headed out on the lake. Despite the rain, this place was still amazing. The rainforest is so green it almost hurts your eyes. The lake is azure blue and the limestone cliffs are pointing out of the lake like razor-sharp teeth. Our guide called himself Big man which did justice to his posture. After a while, we got out of the boat to visit a cave. As most guides big man killed the light after a while to show how dark the place was (it really was...). Back in the boat, we headed towards a floating village where we would spend the night.

Limestone cliffs popping out of the lake everywhere 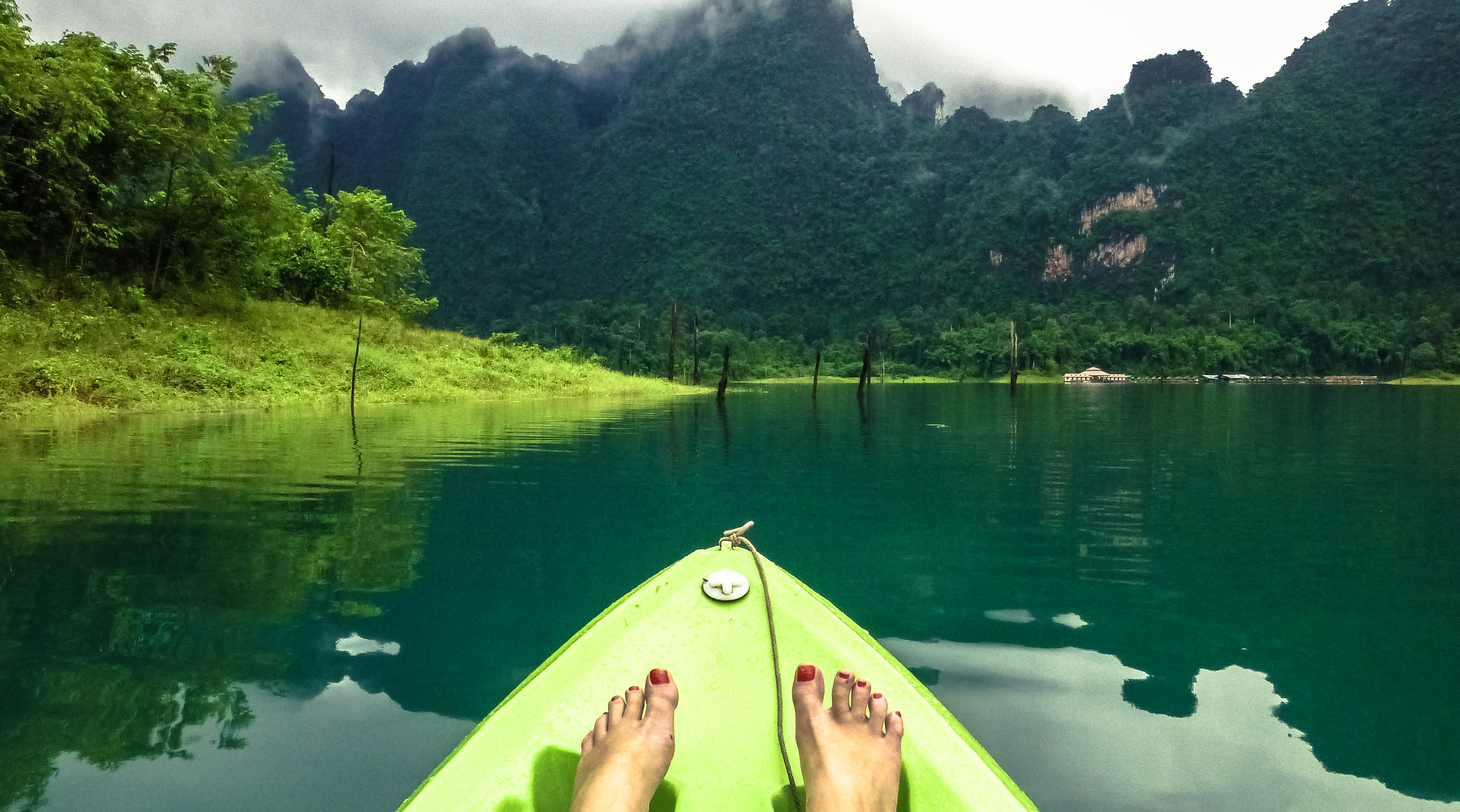 The lake is scattered with these floating villages. Mostly consisting out of bamboo huts in a half circle position. The kitchen in the middle of the village. In the afternoon the rain stopped and since we were free to do as we were pleased, my girlfriend and I grabbed a canoe and went out on the lake. We heard a lot of monkey activity, but we weren't able to spot any. After we had dinner with the group, a night tour by boat was scheduled to spot some nocturnal activity. Big Man wasn't really up for it since no animal would probably show itself due to all the rain we had seen that day (he said). Eager as we were, we still wanted to give it a try.

After cruising around for a while Big man just started laughing out of nowhere. He was so pleased by our faces constantly following his flashlight, he couldn't stop giggling. He said he was just shining out of courtesy since, like he said before, no animals are out there. We all had a good laugh and later spotted a firefly which was really the only animal we saw on the night safari. Night shot of the village 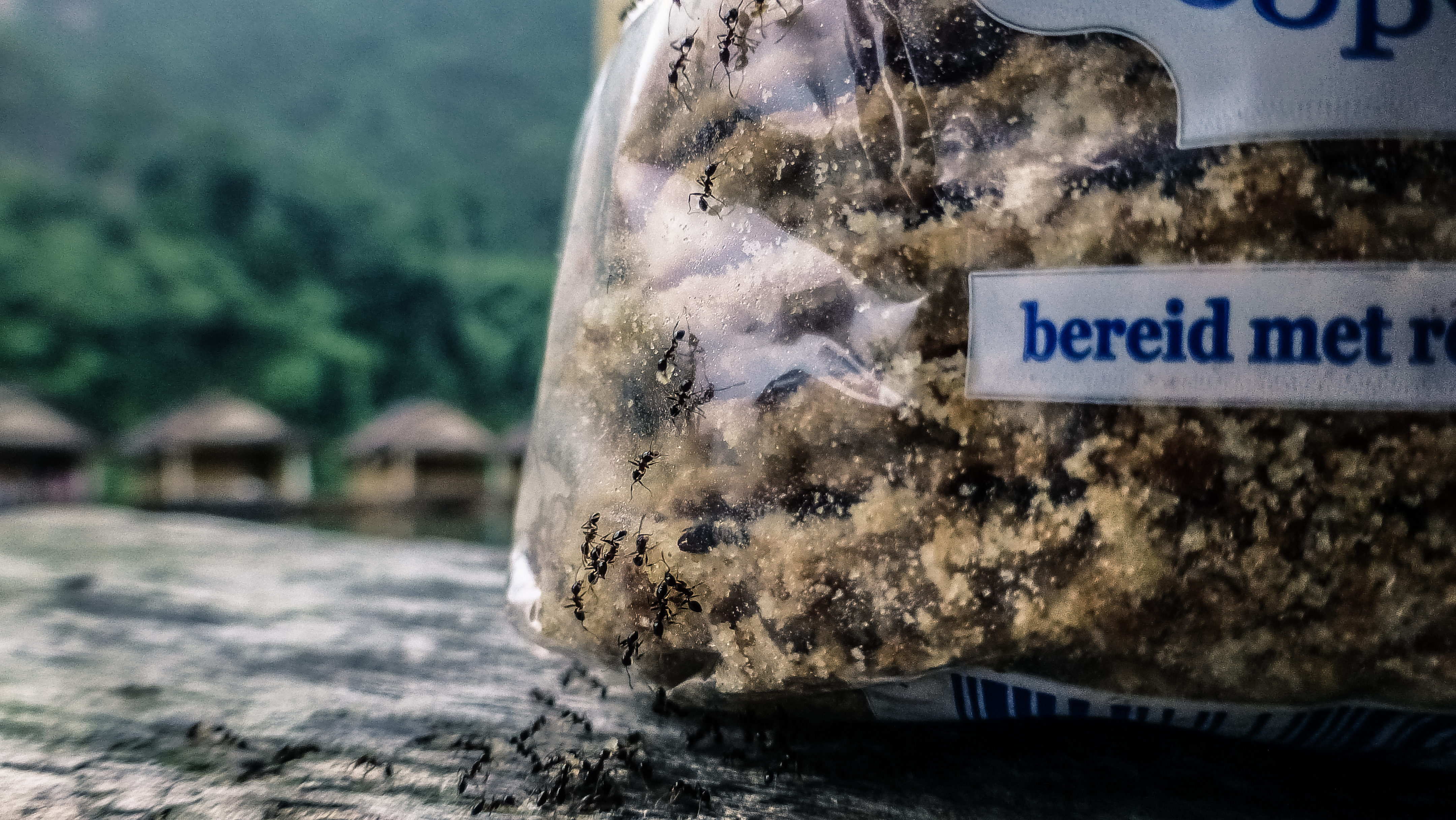 Back in the floating village we had some beers and played some cards. We then headed to our cabin and discovered my girlfriend had left a Dutch delicacy in her backpack, called Stroopwafels. It turned out ants love them (which is not so weirds since it's pretty sweet). After we got rid of the huge amount of ants, we lay to rest in our cabin. This may sound pretty luxurious but it was actually just a bamboo square hut with one big mattress in it =) The next day we did some swimming in the lake (the water is quite warm) and after a very good breakfast we grabbed the long-tail again. After a short trip, we got out and went hiking. Because of all the rain (more rain had come during the night), the trail was really slippery. But the hike itself through the rainforest was stunning. The hike ended at what looked like a small bifurcation from the lake. There was a floating house where we grabbed a bamboo raft and crossed the water to visit another cave. The cave had some crazy spiders and was pretty fun to discover a bit. After the cave, we went back the same way and once we were back in the floating village we grabbed the long-tail again to get back to the Ratchaprapha pier. 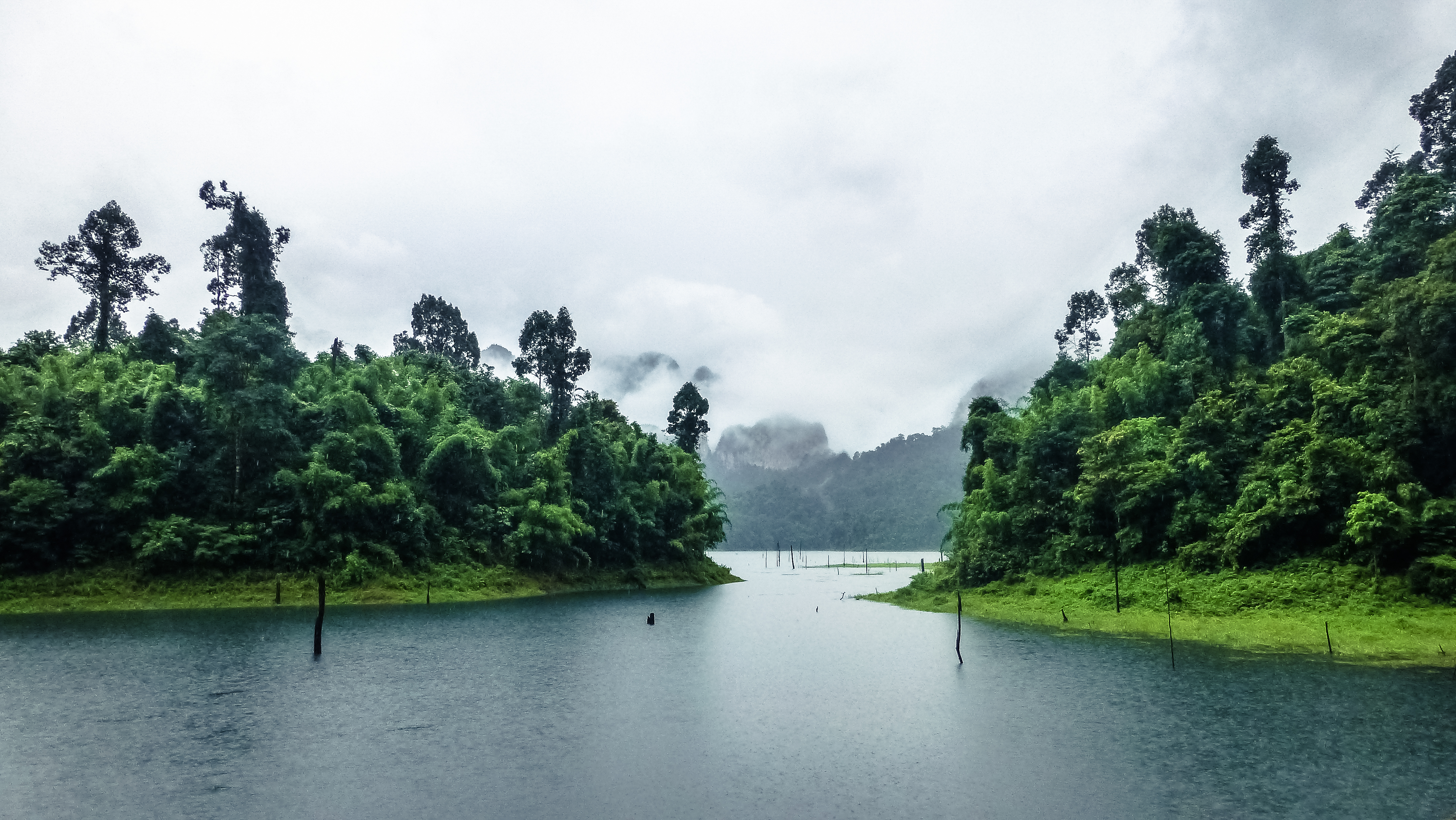 This way to the toilets, pretty "shitty" right =) 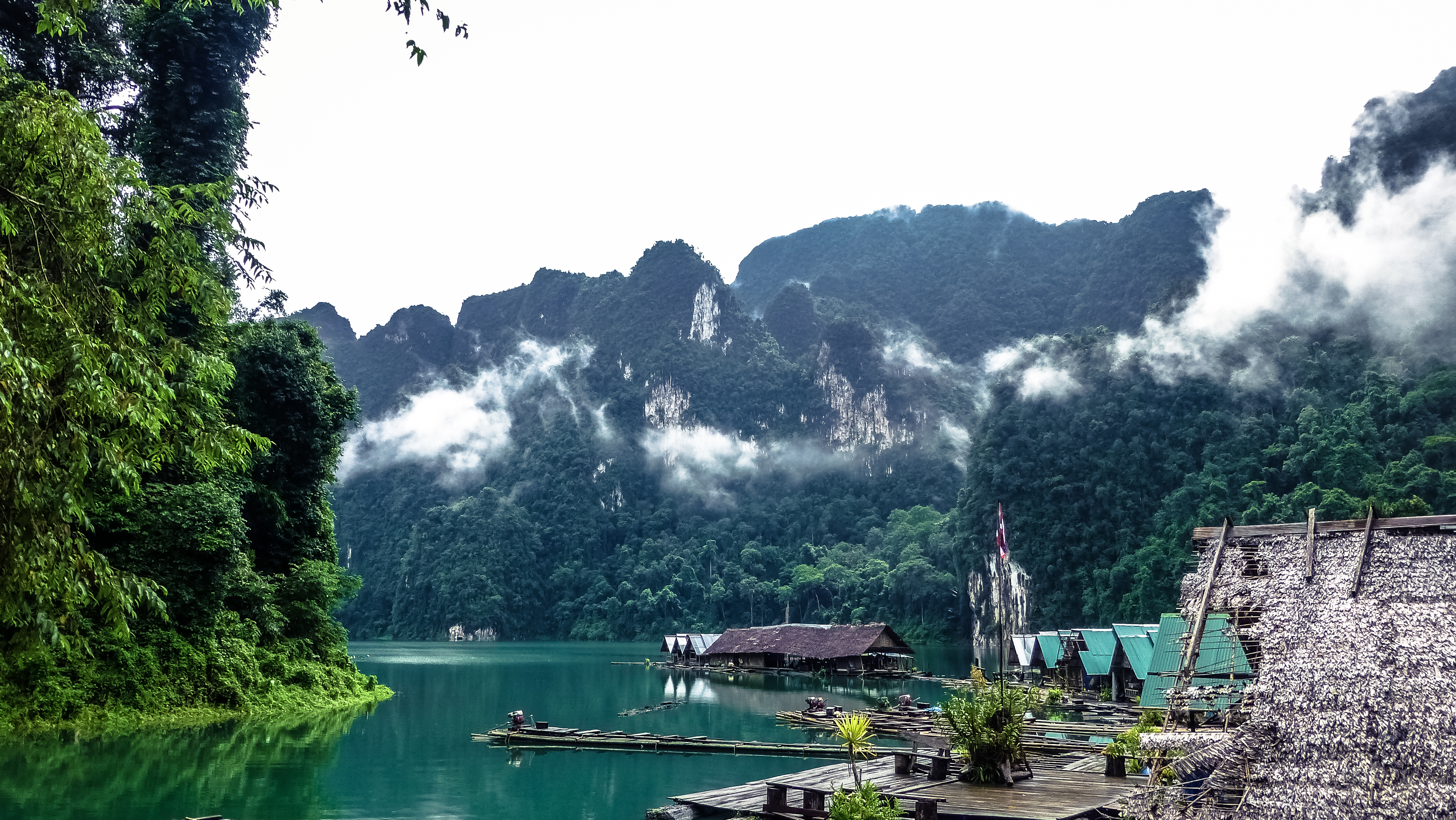 End of the hike Bamboo rafting with Big man on the first row

We really enjoyed the tour. Khao Sok NP is such a breathtaking place and it is not crowded at all compared to the rest of Thailand. The flora and fauna are pretty unique. Although you probably won't see most of the animals (like tigers, bears, elephants etc.), there is still a lot you might see. Like Gibbons, Tapir and a lot of crazy birds and insects. But if you're faced with a lot of rain, like we did, you probably will only hear them =) An overnight tour costs the same everywhere, around 2.500 baht which is around € 60. This price includes transport, multiple meals and a place to sleep. Not included is the entrance ticket for the park (300 baht).

If you enjoy my work, please consider upvoting it and follow me for more travel blogs around the world. Also, check out my Steepshot account for daily travel shots!

If you’re interested in any of my previous work, feel free to check it out below:

I'm really impressde with the toilet there. It's a little bit the same as one in my hometown :)

Haha no way, thats not good! Hope you don’t have visit it too often =)

Thanks @choogirl. Although we were faced with a lot of rain, for us it was still one of the best places we visited in Thailand.

Hiya, just swinging by to let you know that this post made the Honorable mentions list in today's TravelDigest

Your picture of the path to the "toilet" is amazing... what a shitty way to shit indeed.

I love Thailand, thanks for sharing info about this part of Thailand I've never explored!

Haha thanks! And it wasn't even a proper toilet, just a hole leading everything to the other side of the hill :P

Congratulations @steef-05! You have completed some achievement on Steemit and have been rewarded with new badge(s) :

Wow, what interesting places, it will be necessary to put this in my notes. Not far from Phuket - my base station)).