In this posting, I'd like to go back to Gyeongju city again.

When I visited Gyeongju next time, it was too cold to take the photos outside at night.
It was so cold, but I could not miss that chance.
It was already dark when I arrived at the bridge.
The pity was that I couldn’t feel the whole atmosphere and the circumstances around the bridge.

So I made up my mind to visit Gyeongju once again.

Up until now, there are lots of things for me to take the photos of Gyeongju.
I will visit Gyeongju city once more before the summer getting close to escape the hot weather.

Woljeonggyo had been built for more than 1000 years ago in Shilla Dynasty.
The original bridge was destroyed completely.

In recent years, the excavation had been done and the pieces of the bridges were found under the river.

The government had decide to rebuilt Woljeongbridge as same as possible like that of Shilla dynasty.
It was recorded that Woljeonggyo bridge was so splendid and luxurious in history book.

When I arrived at Gyeongju, the reconstruction was almost done.

The view of Wolgeonggyo brings had been changed with time going. 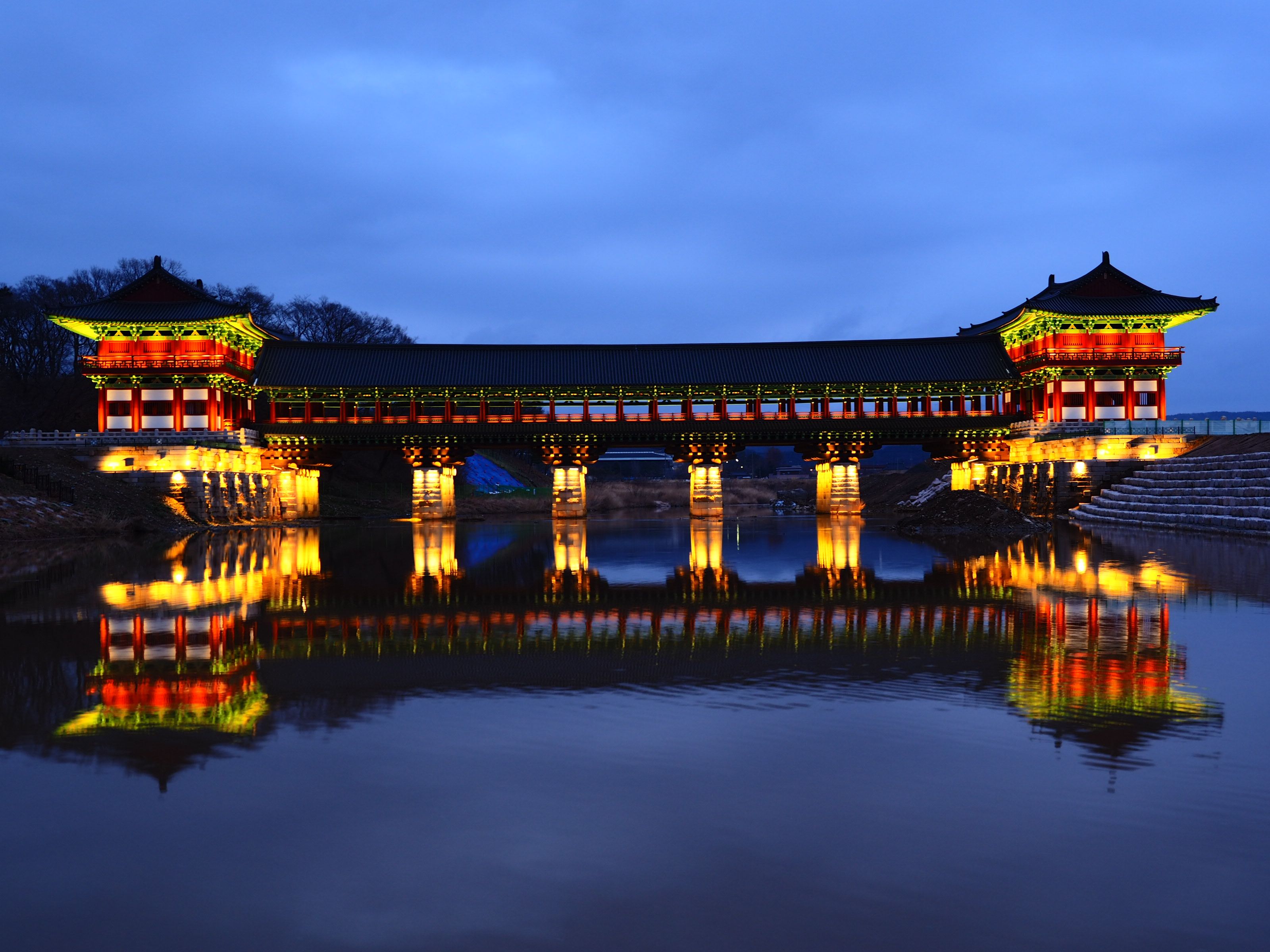 Next are the photos taken by 2nd times visit. At that time I could not take the photos of whole appearance.
It was too dark to find the center in the river. 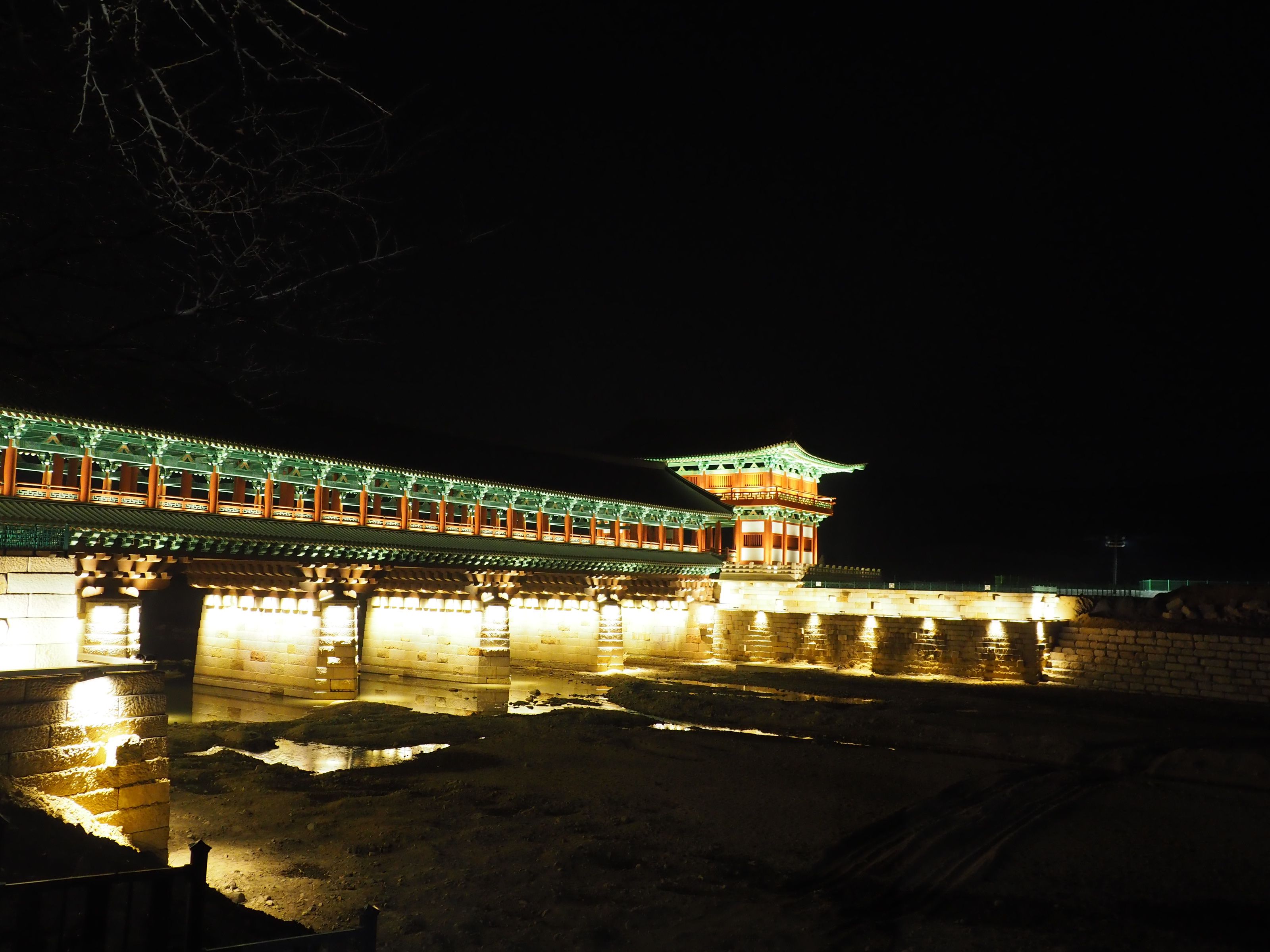 Below are the Front views of the bridge. 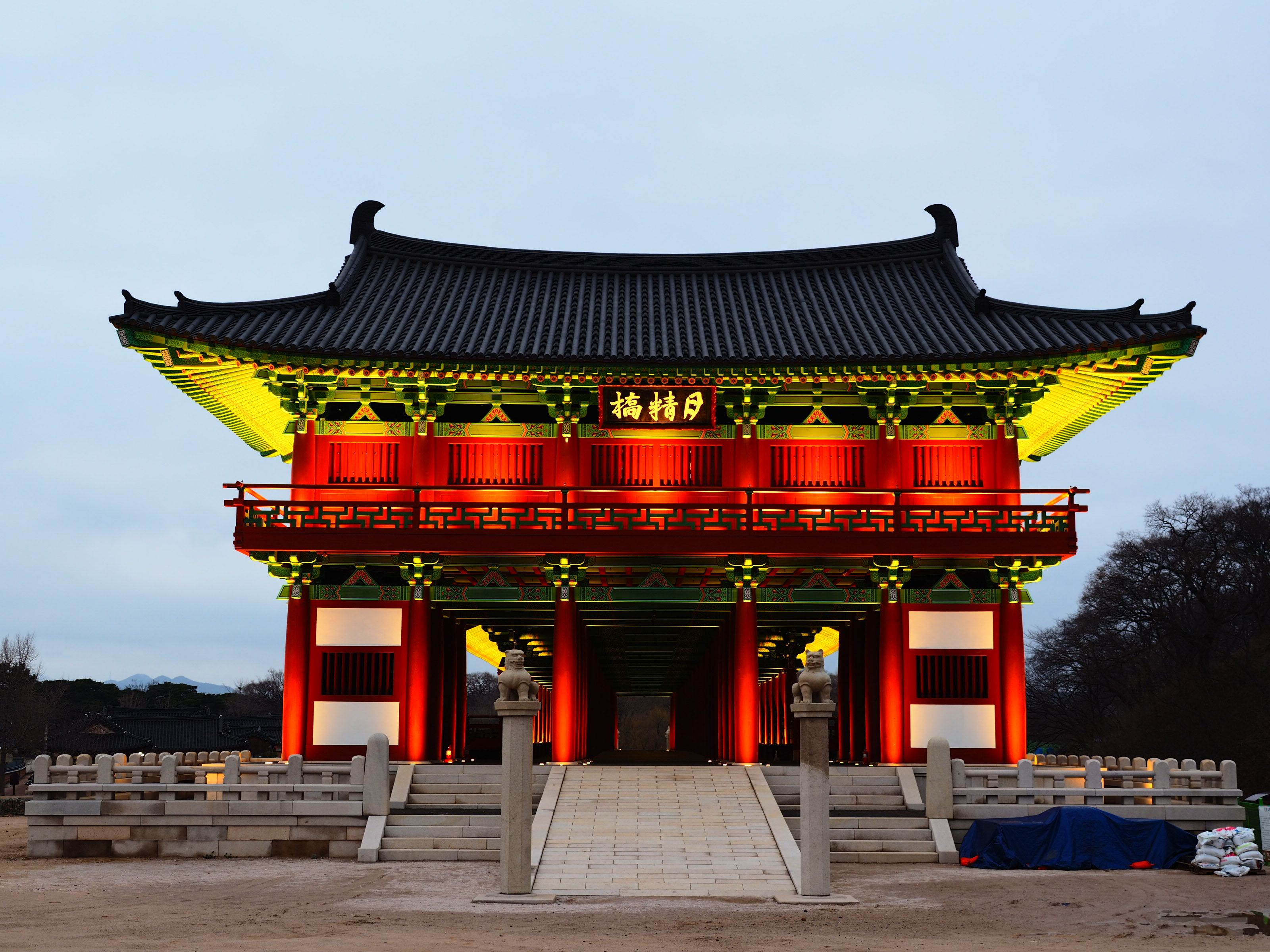 After finishing taking the photos, I sat at the caffe near the bridge.
It was quite awesome to take a cup of tea looking the night view of the bridge. 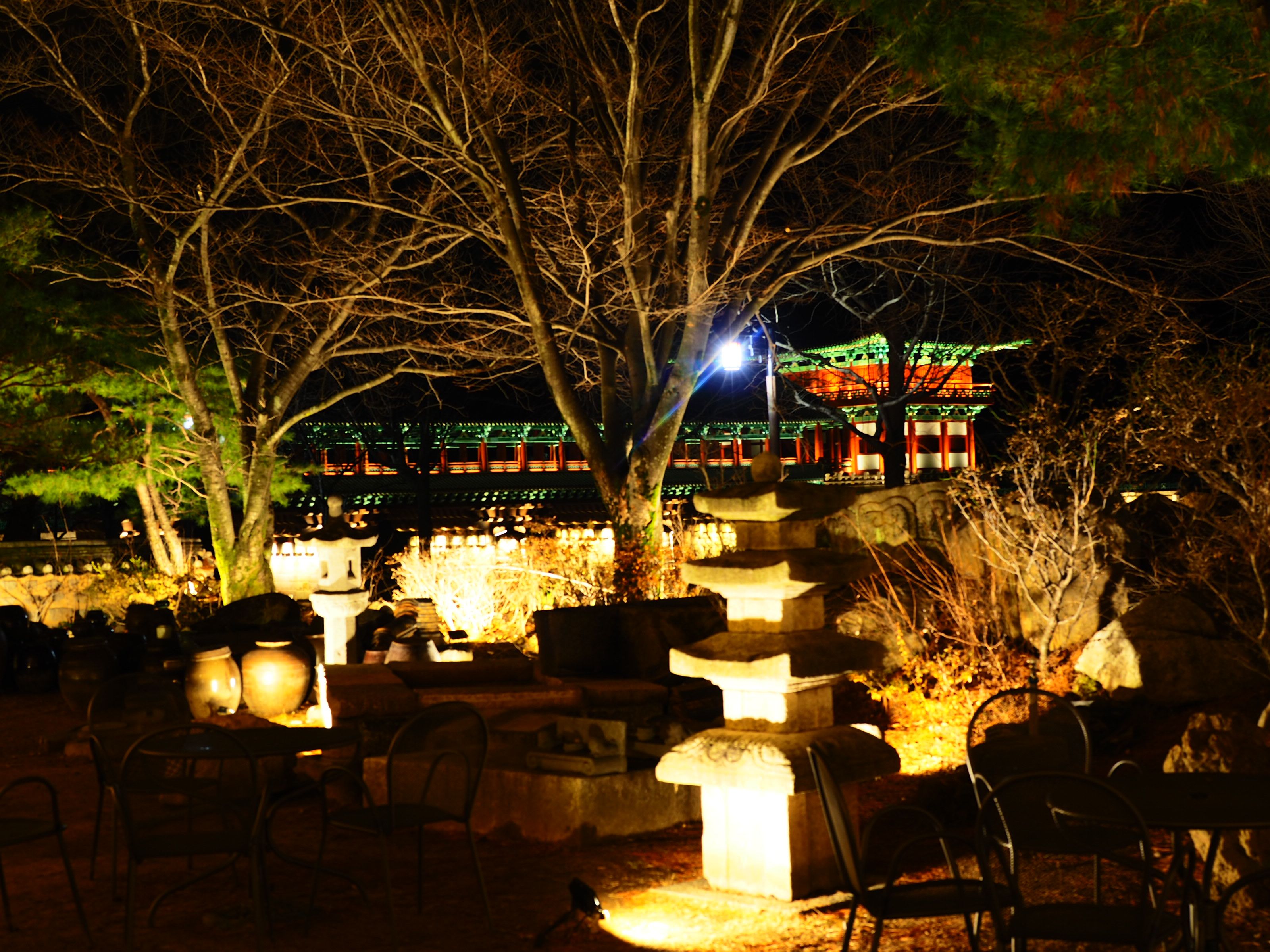 How about the night view of the bridge ?

It really is so calm there and astonishing to see the Woljeonggyo Bridge @slowwalker and it is good to visit that place because of the breathtaking panorama of the famous bridge which is here illuminated very beautifully.

amazing view, thanks for sharing

wow such a great you can travel and share with us your experiences .. thanks

Nice reflection from the water.

As I wrote you before Gyeongju falled in love with you and never wants to let you go :D

on the bridge woljeonggyo really very beautiful scenery, I like to post friends, I upvote and resteem yes.

a very amazing night [email protected] have never seen such a very beautiful night. thanks for a very good nightly post @ slowwalker.saya upvote and resteem your post.thank you

a very great trip I really want to go there. friend please help me, i always help you [email protected]
Upvote and resteem @slowwalker

I would like to use my cartoon style on some of the photo's in your blog. Is that ok? It would end up looking something like this. 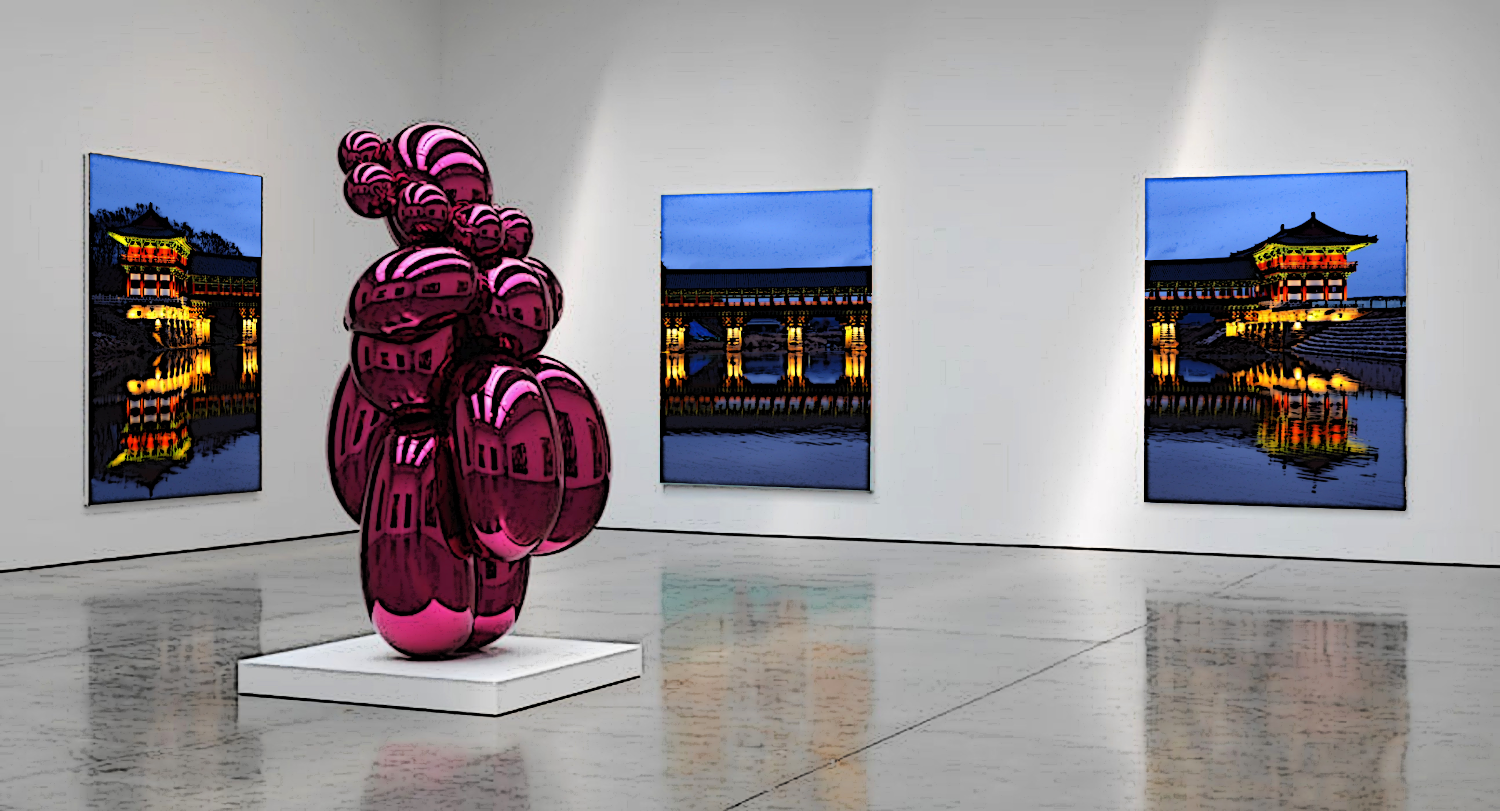 Wow is beautiful, the ligh is amazing

a very good story my friend .. and his city was very nice really friends. please help visit my blog once my good friend yes @slowwalker

Wow such a beautiful place <3

If neo grow a bit i'll go to China but now i'm close to be homeless :P .

It is beautiful and absolutely breathtaking, @slowwalker! ❤️ You really have a thing for historical places. And I'm glad to know about them. 😃

it's so cool, have a nice day, I want to be like you

It’s splendid picture from night view with the bridge 😊
It’s difficult to take a photo without light for me.

Maybe I should go there too.
It looks a very nice place to be.

really amazing the night view of the bridge.

amazing photography, i hope i can be like you, have a nice day, regards from @fikar22, please help me if there is time

Great post! you are really lucky, I want go to Korea next year. And your camera is really good to take this photos. Thanks for sharing

Wow so much love this view

It is an incredibly beautiful place...the lights of the bridge are gorgeous.. The view is amazing...
I wish you always have so beautiful experiences.😀

it truly is an extremely delightful night air @ slowwalker companion. I am exceptionally content with the post that you generally share for me and my companions all.karena every one of your posts extremely classy.terimakasih for posting an exceptionally wonderful night.i upvote and resteem your post @ slowwalker.gyeongju Korea

It was worth so much effort, they are wonderful pictures.

Thank you for showcasing with these remarkably beautiful photographs. The illumination of lighting can create a magical ambiance at night for all to enjoy. Blessings @slowwalker

Your heartfelt efforts are beautifully displayed in the picture.

It was worth it to come back a third time! Amazingly beautiful view. The first photo is a masterpiece.

WOW. First photo is a killer. What an awesome building. Would love to see it live. Must be magic.

very much enjoy these posts...and thanks for your support..

waaaw beautiful photos, see the bridge at nightfall and the lights that decorate the bridge, make amazing eyes, warm greetings @slowwalker from me @rudirach

The wolgeonggyo bridge looks very beautiful at night, the lights are on every corner of the bridge yamg make your night fun @slowwalker

Those pictures are awesome and beautiful

Definitely a show of bridge, I imagine that cup of coffee you enjoyed a lot with that beautiful sight.

look amazing..!!!Hi, I just followed you :-)
Follow back and we can help each other succeed!!!!@davidgeproject

Nice [email protected] a quite place

To me, night photography is a very challenging category. You did great here. The bridge looks very impressive. Never been to this part of the world so far but obviously, there is lot to see too. Thanks for the inspiration.

Amazing bridge! I could hardly tell that the Woljeonggyo bridge is more than 1,000 years old! The architecture is formidable for people during that period. Because they had to build everything with their hands, no computer and no heavy tools! Great work of ancient people who were much more clever and civilised than our generation!

Thank you very much for stopping by my post. I am very grateful to your attention and support.

I sat at the caffe near the bridge

the night view of the bridge is beautiful. The light make it so mysterious :) That bridge seems like it painted, i would love to visit it.Are there any food dinnning spots nearby the bridge?

Your photos are safe with us: http://www.steempix.com

What an incredible place it must to be nice be there, I follow you 😊

It's amazing. I wish to visit Korea as soon in the future. Thank you for sharing.

its beautiful. if u like traveling come to Egypt u will take a lot of pic for amazing places and it will be in ur mind too with love from Egypt

the night view seems fabulous ... Thank you for such beautiful photos.

a beautiful and historical place

Hello, come and see my today post about Russia

Wow.... What a great photography of a Great moment's

Damn these photos are breathe taking. I would like to visit Gyeongju some day. :)

Wow! The place really looks beautiful at night! I think it can be a good place for dates too or some star gazing. This is such a beautiful place for me.

Average post ... lazy lay out with pictures and information...just cashing in on the whale games and going through the motions. Too bad with someone with this much influence on steemit doesn't have more creative talent . I'm allowed to have an opinion and critique this content ... don;t down vote me for it. Where as Upvoting this comment means other's agree that these $500 a day post make a mockery out of what can be a real serious new social media medium..

It is a very beautiful picture. I would like to go to Gyeongju city to see this bridge.

I really agree with you, memeng night view in the city of Gyeongju bridge is very beautiful, and the way his photo of juva is very good, success make @slowwakler

At night this place looks very colorful, I like it @slowwalker. Nice photos, the first one is my favorite :)

Such a beauty! The Woljeonggyo bridge is something spectacular in the night! I love the architecture of this bridget, but I have to say that the lights in the night give it a very special atmosphere! I love it ^_^

Beautiful photos! Love how your camera captured the light and the colors. Very sharp and crisp images.

Your photos are beautifull! Can only imagine in real life!

Great photos. I especially like the first one with the reflection in the water and the fifth photo with the red, black and yellow architect

@slowwalker This bridge is incredible! The reflection on the water is so beautiful. What a perfect place to sip some tea and take the time to admire the architecture!

Truly gorgeous. Haven't made it to Korea yet, but next year it's on!