In this posting, I’d like to post on In Jeong Jeon as I told yesterday.
In Jeong Jeon was the main official building for King’s reign.
The name of this building ‘In Jeong’ means that ‘reigning people in good manner’. 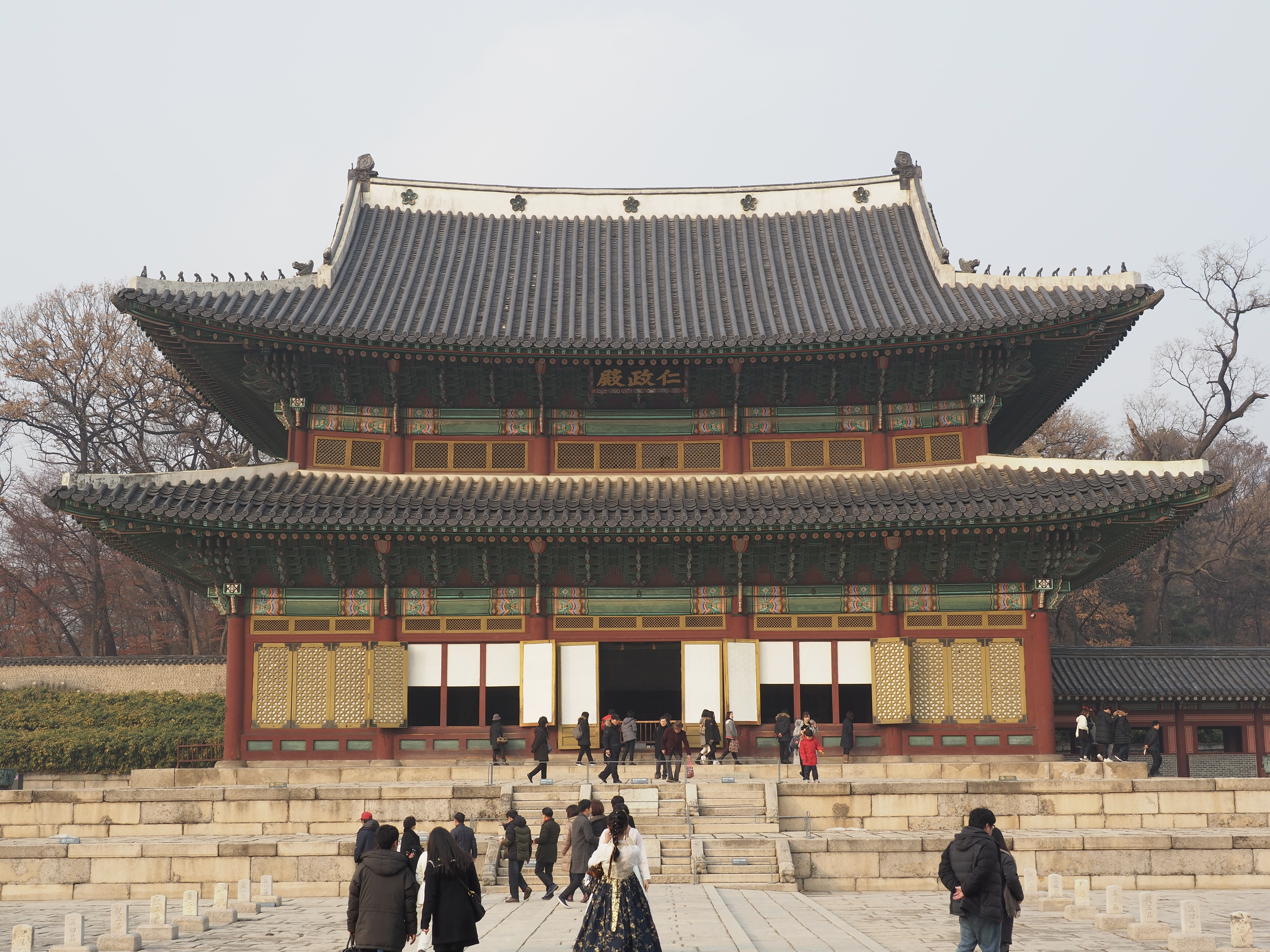 In ancient northeastern Asia, politics solely depended on king’s mind.
It meant that politics was but a King’s personal matter not a systematic process.

In Confucian philosophy, the best way of good politics was cultivating King’s quality and ability.
They had set up the ideal type of politics and King and King needed to come closer to that ideal model.

But this kinds of political system had not been successful always.
Frankly speaking, it was not easy to find out the good Kings who had done their work well for people.

Confucian Political system was of a very large scale of bureaucratic order under the summit of King.

You could look at the marking stones. There are 18 grades of bureaucratic layers in Choson Dynasty. 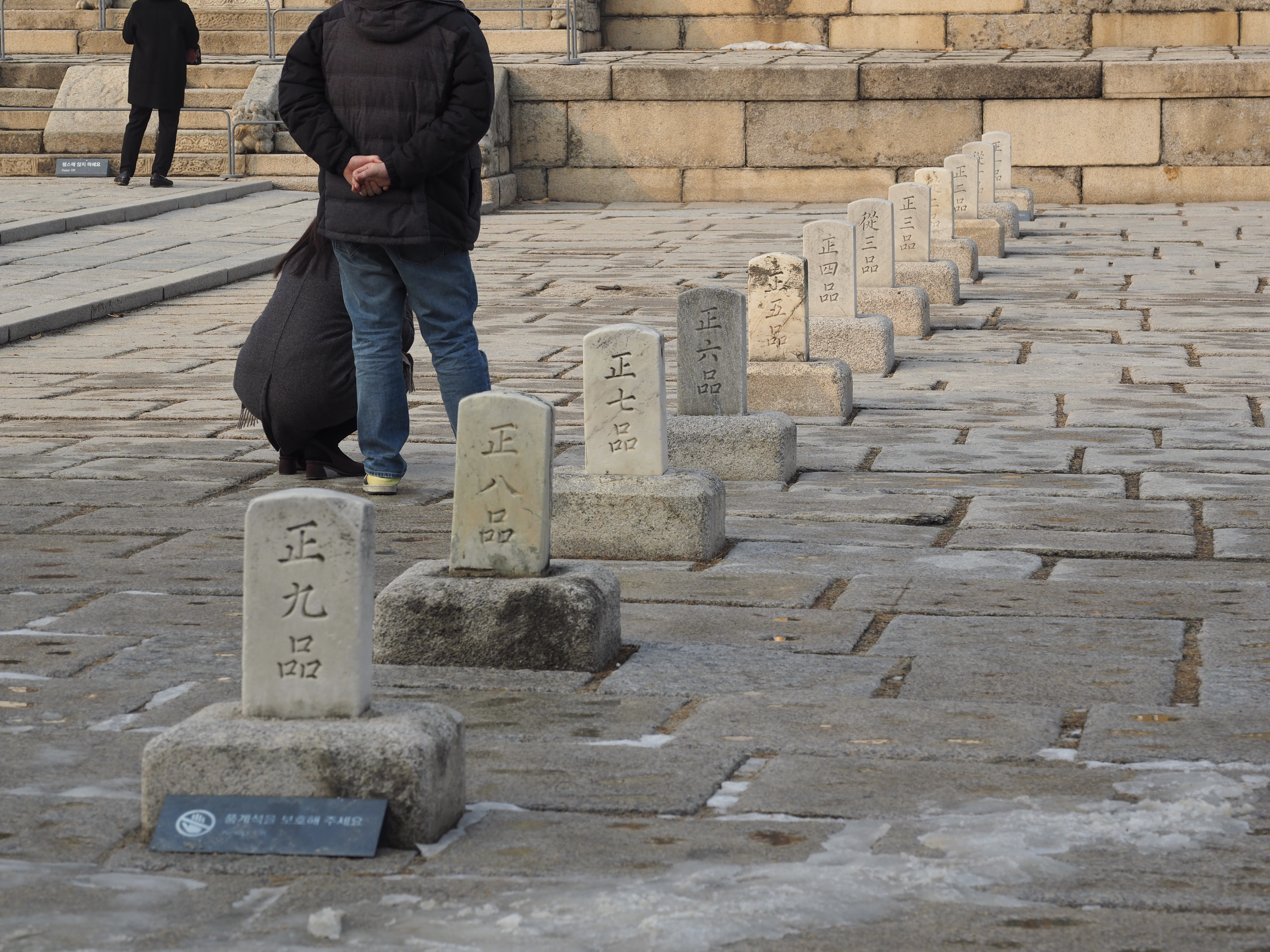 When the official ceremony had been performed, all officials were standing besides the marking stone.

That kinds of ceremonies was the essence of Confucian philosophy.
In this aspect, Japan was quite different from Korea and China.

In historical process, Japan seemed to be slightly different from Korea and China.

The strange thing was that Korea(Choson Dynasty) was much more strict in keeping Confucian Doctrine.

I don’t know who to explain the reason why Korea was stricter than China in keeping Confucian Doctrine.

Anyway the palace ‘In Jeong Jeon’ was a symbol of the Confucian political system.

There are 3 palace in Seoul which had been built in Choson Dynasty.

Actually Chang Deok Goong was built by King Tae Jong who was a son of 1st King Tae Jo.

He had became 3rd king as a result of Coup. He built Chang Deock Goong to show his political power and legitimacy of his reign.

In architectural aspect, it was said that Chang Deok Goong was strongly influence by Koryeo Dynasty. But it was not easy for me to notice the differences between two kingdom’s architecture.

Impressive thing was that the fore ground in front of In Jeong Jeon was covered with wide stones.

So when it rains, in Gyeong Bock Goong, you could enjoy the beauty of the rain patterns shown by the holes and the ways made between small stones.

You could take the best shot of In Jeong Jeon at the corner. 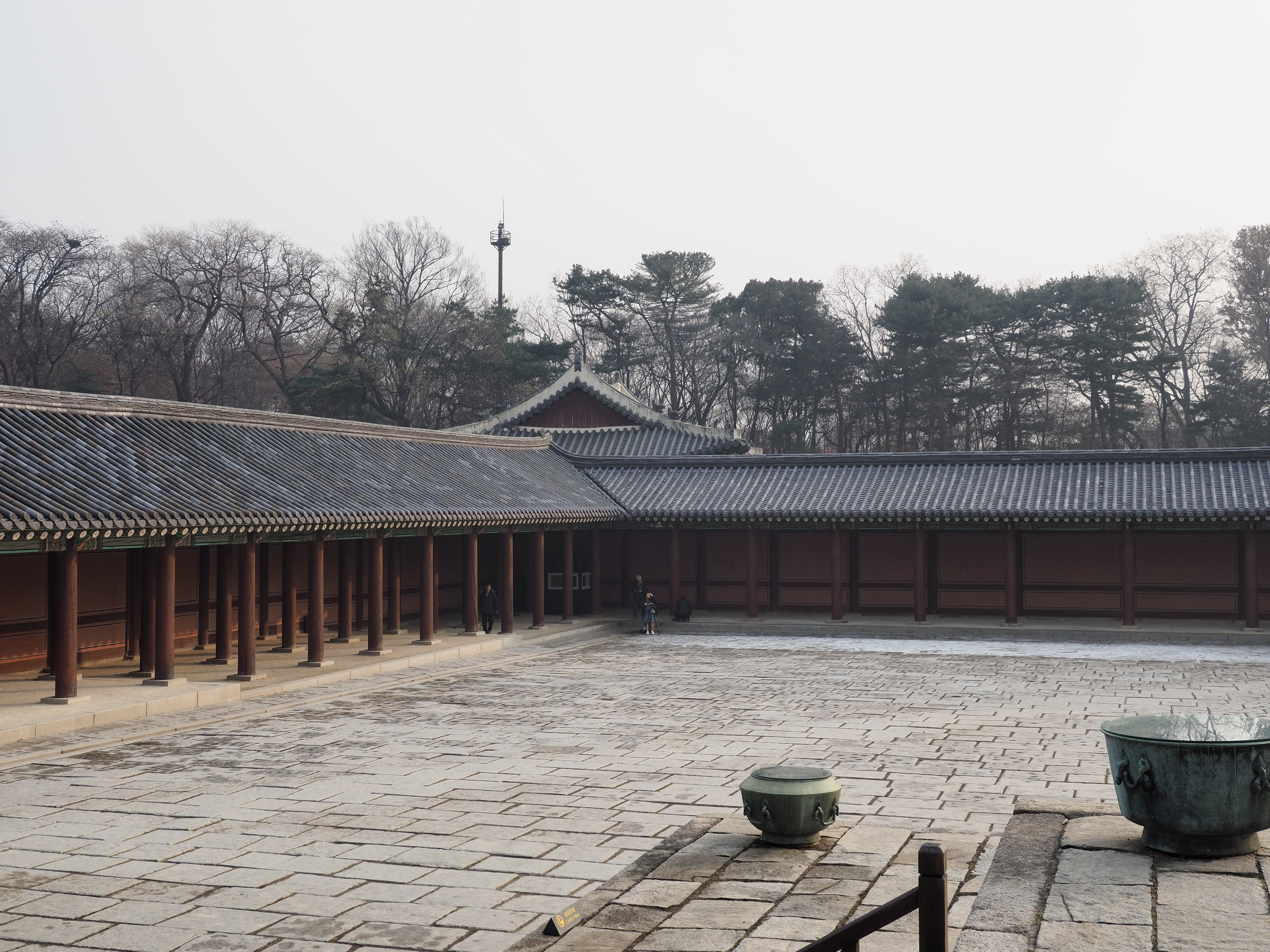 You need to remember this tip.
Small tip could make your travel more meaningful. 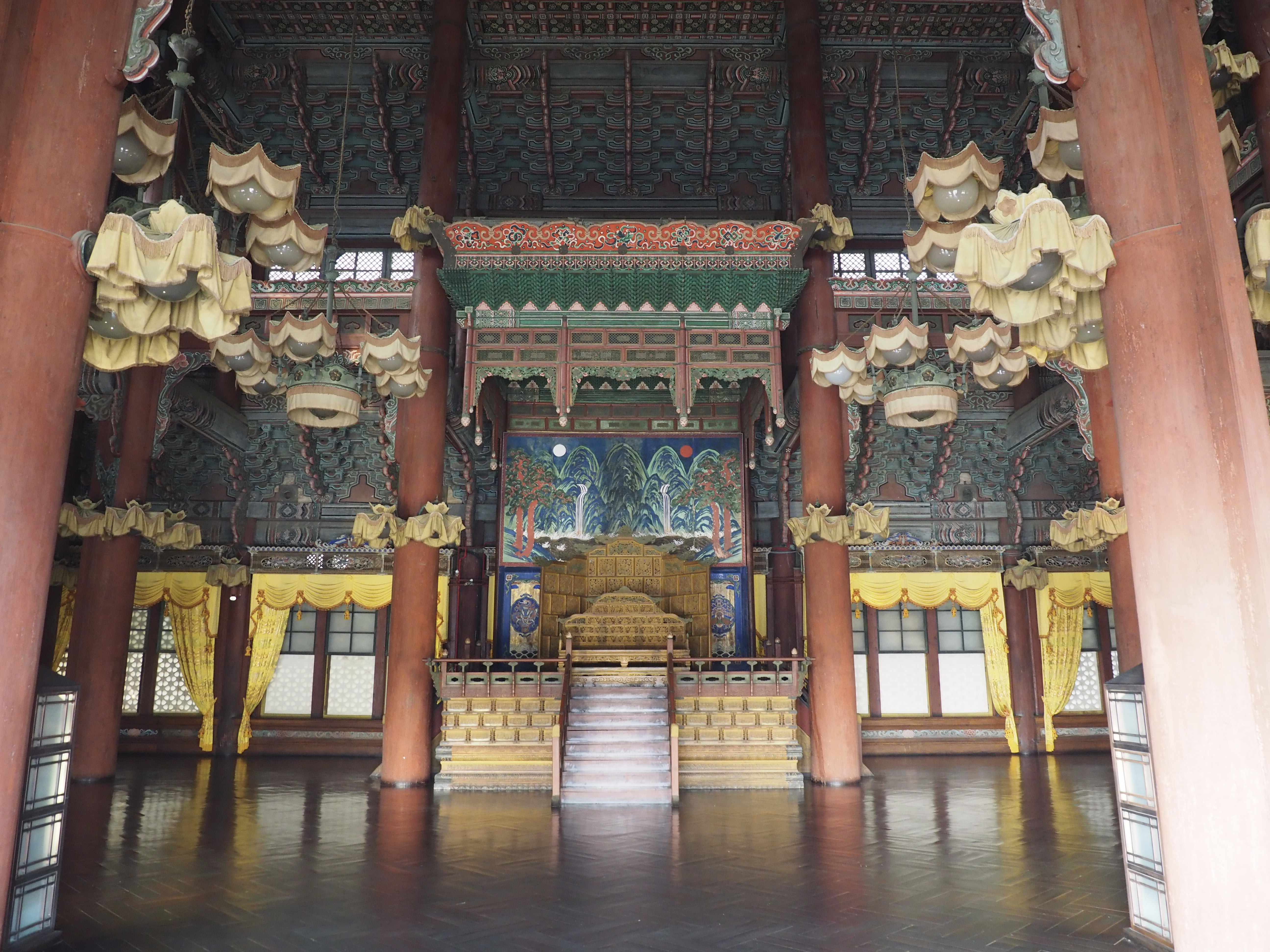 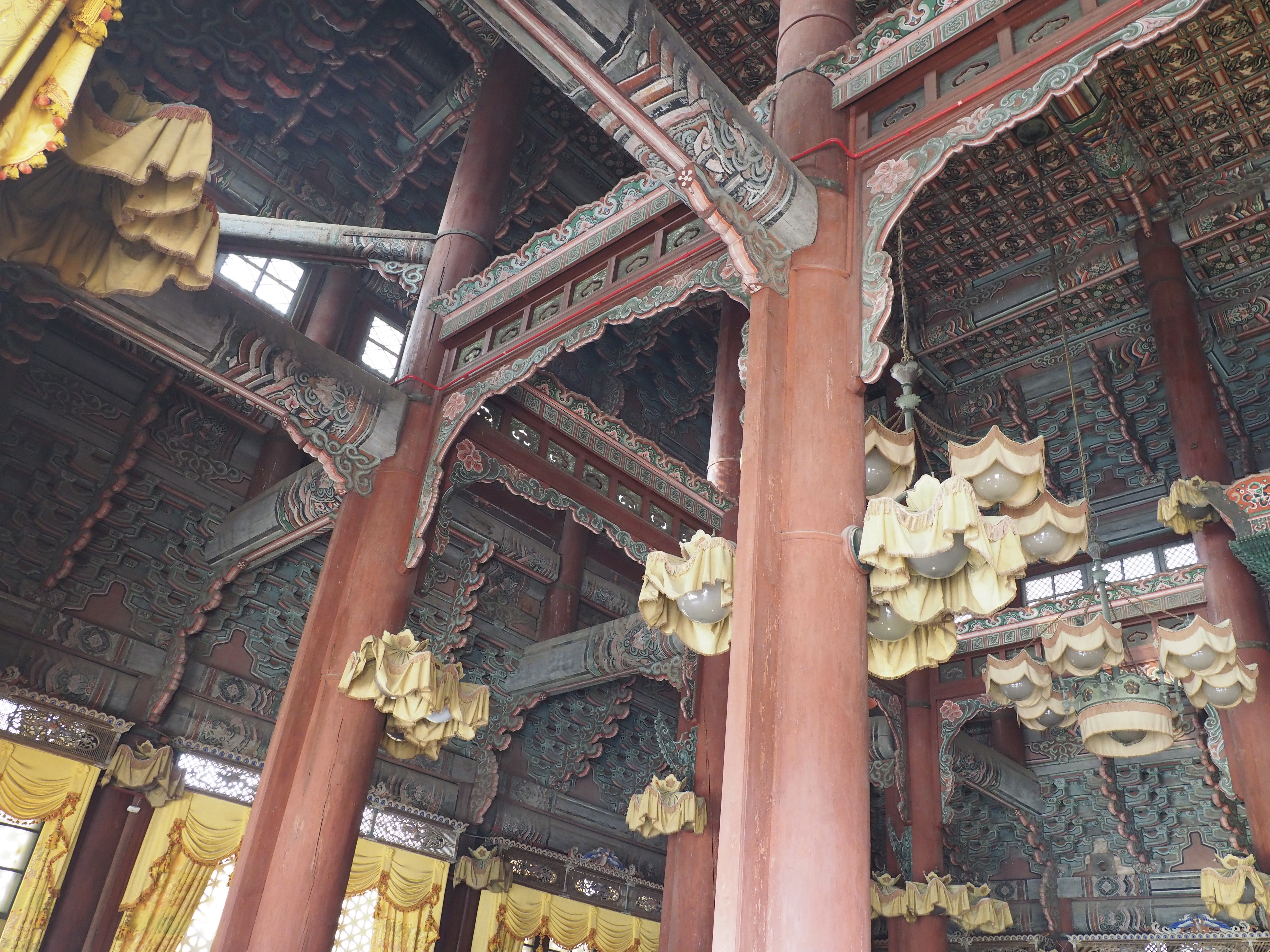 I wish All Steemians a happiness and a success in cpyptocurrency investment.

very beautiful place, thank you for such wonderful photos!

Traveling has humbled me and has broadened my perspective in so many ways.

Really great building and i love the meaning of the name of this buildind. i enjoyed it because you arranged the words in such a beautiful way which is enjoyble i love your content every you post unique.
Love you keep sharing and thank you

Always share amazing historical places. I really like the way you tell and take pictures in great detail. Thank you very much for sharing. May always be successful for you @slowwalker.

Pictures look very similar to the ones you posted on one article last week.
anyway this historical buildings makes me feel alive again

style of building would be similar to each other.
But meaning is quite different

Thanks for the info.✊

Thank you for sharing. You are the best. @slowwalker

Its really looks like a great place..I thought these buildings were just made for show.I did not know how meaningful it was..Thank you very much, I have a new knowledge. @slowwalker

I have visited your profile and I am trying to take you as an example, sir...I hope you like me one day...

Amazing travel story. How beautiful place the Jeong Jeon is @slowwalker!! All photographs are so nice. Be well off. Happy new year 2018 @tuhin201

HAPPY NEW YEAR TO EVERYONE 2018 Thanks you and happy new year. May we all be rich in 2018. Jeong Jeon is beautiful and it represent the typical Chines building. Good to pictures from inside too.

a memorable history, and a history that has its own meaning, good friends post, for tonight please support for my promo-steem post friends, and happy new year and success always @slawwalker thank you

Your trip is always fun to see, many beautiful places in korea, which I know from your post. Have a nice day @slowwalker

happy new year my friend .. please help unvote have me my friends yes

Thank you for sharing with us.
'reigning people in good manner’
It is good for all

Asia really has a fascinating story too, and I'm really fascinated in it. So thanks to you because very interesting to read with the illustrations. very well summarized.
Sorry for my english
Take care

Woooooow! amazing work i like it and follow you because of your work keep it up hope for the good thanks

Hope you also vote me and follow me thanks

travel is very happy I really like your travel, goodnight new year 2018 @slowwalker.

A very beautiful architecture. Everything is very unique there. The walls, the paintings and the chair. Even the floor looks very special. Thank you for sharing these nice photos and the history behind it. Have a happy new year :)

Yeah a nice and beautifully furnace

Awesome photos!!
The architecture is really amazing.
You may want to check your last sentence in this post tho ;D
Great work as always and Happy New Year to you and your family!

wish you very healthy and happy new year my friend. please upvote and follow me back also @rajat1802

good post. Happy New Year. success always in 2018. do not forget to visit my blog @ aamaksal ..

thank you so much
Happy new year

I would like to go there someday, thanks for this great information.

You will not regret visiting there

The artwork is really pretty here. In a way it's sort of unfortunate that we seem to have lost the value of art in modern construction. Thanks for sharing.

great historical article!! It is so informative especially for foreigners who don't know much about these places. Anyways Thanks #slowalker for sharing.
Happy New Year

I am leaving my upward vote and continue supporting to continue growing. I hope you go through my last post of the year thanks
https://steemit.com/cryptocurrency/@jesusj1/solo-un-dia-para-un-nuevo-ano-steemit-seguimos-creciendo

Nice post! Thanks for sharing what I called an epic story. I really enjoyed and learnt a lot from it. I follow and upvote you.

Did I told you already I love these roofs?

Hey there! So glad we have found eachother's blogs I just noticed your up-vote on my recent post. Thank you for that. You and I certainly have a lot in common. I love traveling, photographing documenting other cultures; quite frankly it's my passion and hobby. I've been traveling for over 11 years now living out of backpack!

I love this post here. The Choson Dynasty! I haven't heard that name in years! Brings me back to my days in Korea. I lived in Seoul teaching English for four years from age 20-24. Now I'm 35. I'm pretty sure I've been to this exact place. Korea is so rich in culture and history, Asia in general. Asia is probably my favorite place to explore. My travels have taken me from Japan to Cambodia and much more.

So glad to find someone I have so much in common with here. Being my steemit elder, I really am inspired by how far you've come on the platform. Will be following you and keeping a good on eye on your blog! Wishing you a very Happy New Year, from Guayaquil Ecuador! -Dan "World Travel Pro!"

Thank you for your comment.
The one of the best pleasure in Steemit is coming across people having in common.
I follow you
Your experience would be great help to me.
I'd like to travel after retirement.

Couldn't agree more. Love finding like minded people here with much in common.
Will certainly be checking in with your from time to time!
Happy New Year! -Dan

Nice place, this is one of many place in my draft to visited. i hope someday can be there. For me to visit a place full of history is the best experience. We can learn and take positive value. Interesting post.

I just visited your blog.
Thank you for your visit.
I will drop by the coffeeshop where you posted

Huge thanks for visiting my blog. please let me know after visiting and tasting coffee!!

I've visited this place back in 2013! It's very wonderful and there was so much to see! My tour guide was funny and she made the experience fun!

I dig the way you tell stories on here! You educated us as well as told us your experience on what we're looking at! Thanks for taking the time to tell us your story!

You presented the place in a most interesting way. I surely follow you for more content my friend.

Excellent travel story. How beautiful place the Jeong Jeon is!! All photographs are so nice. Be well off. Happy new year.

Great post @slowwalker, thanks for the insight into the Dynasty. Love the interesting architecture.

You are so great many history you visit, history story also very you know ... you really great ... Thanks and success always for you .. @slowwalker

You are welcome ☺️

resteemed. :) @slowwalker, thanks for sharing this. This is a historical place. Awesome. I hope to visit SK.

it is really looking good...
Happy new years Eric! I wish you a fantastic year!

Thank you for all the amazing energy you spread in the platform every day!

What an amazing and impressive place. I would love to visit someday (I love Asia!).
Following and looking forward to seeing more of your pictures.

Neat. I appreciate the attention to detail.

good story .. it's nice for me to know the history that is in korea, thanks for the story .. @slowwalker

thank you for visiting

of friends, I will always follow you, I need your motivation and support ..@slowwalker

There are more and more interesting places again and again. Love your posts. Keep it up.

Love this work! best wishes to you! happy new year and good luck !

Great documentation once again. Just followed you. Keep it up.

I think I would constantly be picking up my jaw if I were here! o.o I absolutely love this! :)