A day trip to Boston, Massachusetts

95 North is the route we took from Old Saybrook, Connecticut to Boston. Just a short drive compared to the 1100 miles we had rode from Florida. Along the way I heard an unusual silence that normally would have scared me, but today started off different. I had jokingly expressed to the children last night, that we need to be on the road by 8 A.M. to beat traffic, and much to my surprise at precisely 7:52 I was starting the family truckster for our departure. Maybe the rest of my family was just as excited as I was? Either way I thanked the collective group for their punctuality and pressed on. My attention was on our destination and I could feel the anticipation building. Will I remember the city? Will it be familiar after all these years? Surely not, but it will be great to make new memories.
As we entered the area I was pleasantly surprised at the lack of traffic. I mean, there was a normal amount of activity for a big city, but nothing compared to what I imagined. Maybe that “big dig” project worked after all? The one thing that was a little odd, was the overhead LED signs with an ominous warning that read “FIREWORKS ARE ILLEGAL….PENALTY = JAIL TIME”. It seemed that the most patriotic state in our union doesn’t want its citizens celebrating Independence Day tomorrow? Strange indeed. Maybe I should have a talk with the teenagers about fireworks safety? Not for us to worry about today, moving on.
After some indecision about exactly where we were going to start our exploration, I exited the highway at the first “downtown” opportunity. As soon as the ramp ended I was greeted with a parking garage and jumped at the chance to leave the confines of a vehicle and venture out on foot. Unfortunately, this was the south end of the peninsula and we wanted to be at the north end. 2 miles separated us from where we had thought about going. So, now we make lemonade. We are just a short walk from Quincy Market, or Faneuil Hall to the locals, and just beyond that is the New England Aquarium. Perfect! Come on kids, it’s go time. The cobblestone streets, the colonial architecture, everything looked antique. The smells coming from street vendors mixed with the salty ocean air. People milled around and completed their morning routine. From the window washers, to joggers, Policemen to cabbies, my senses were simply alive from the whole scene.
The Aquarium was voted to be the first stop being that it was the shortest walk. The seals out front made it the perfect choice. The children, my wife and myself were all smiles as we watched them swim past. Those little creatures look as if they’re smiling back too. As we entered I could hear ooh’s and ah’s of entertainment. Families scurried every which way and there was no real sort of order. Almost like the fish we were seeing had changed how we move. Instead of an orderly two-lane system that we use every day, we moved like minnows through an overcrowded tank. It’s laughable looking back, and in those moments, I never realized it was happening. Now, I must admit, when I read the website it seemed like most of the species were ones that we would see at, or near our home in Florida. Boy was I wrong. Most of the inhabitants are from completely different continents.

We saw rays, sharks and eel. There were turtles, octopus and seal. Pretty much every sea animal was represented in some form. After a few laps around the big tank we decided to take our adventure outdoors. I had made plans to have a cousin and an aunt join us for a few hours and it was time to meet them. The snack bar was very conveniently located just inside the exit. So, after a drink and food break we emerged into the street once again. Our legs were getting tired and it was getting hot out (by Massachusetts standards) so we sat and rested for a minute. My guests arrived momentarily and we had a chance for introductions and hugs.
The next few minutes were spent haggling with a booth vendor for the “Old Town Trolley Tour”. He had played his hand earlier and we overheard the cash price, so the ball was in my court. I asked, “how much for 8 passengers?” and he replied with a high number, I quickly countered with a lower one, and it was done. The deal was struck and tickets were handed over. It was either an exemplary overtime move on his end, or my failure as a champion negotiator, but he got me for the six bucks change. Touché’ good sir.
The greatest thing about these trolley tours is that you can use them just like a taxi cab. As long as you’re willing to listen to the mostly true broadcast of the conductors. The stories are as original as the men they’re about. John Adams, Ben Franklin and John Hancock just to name a few. I personally could ride those trolleys for days. Just sit back and watch the city go by. Places like the “Old State House” , the “Old North Church” , 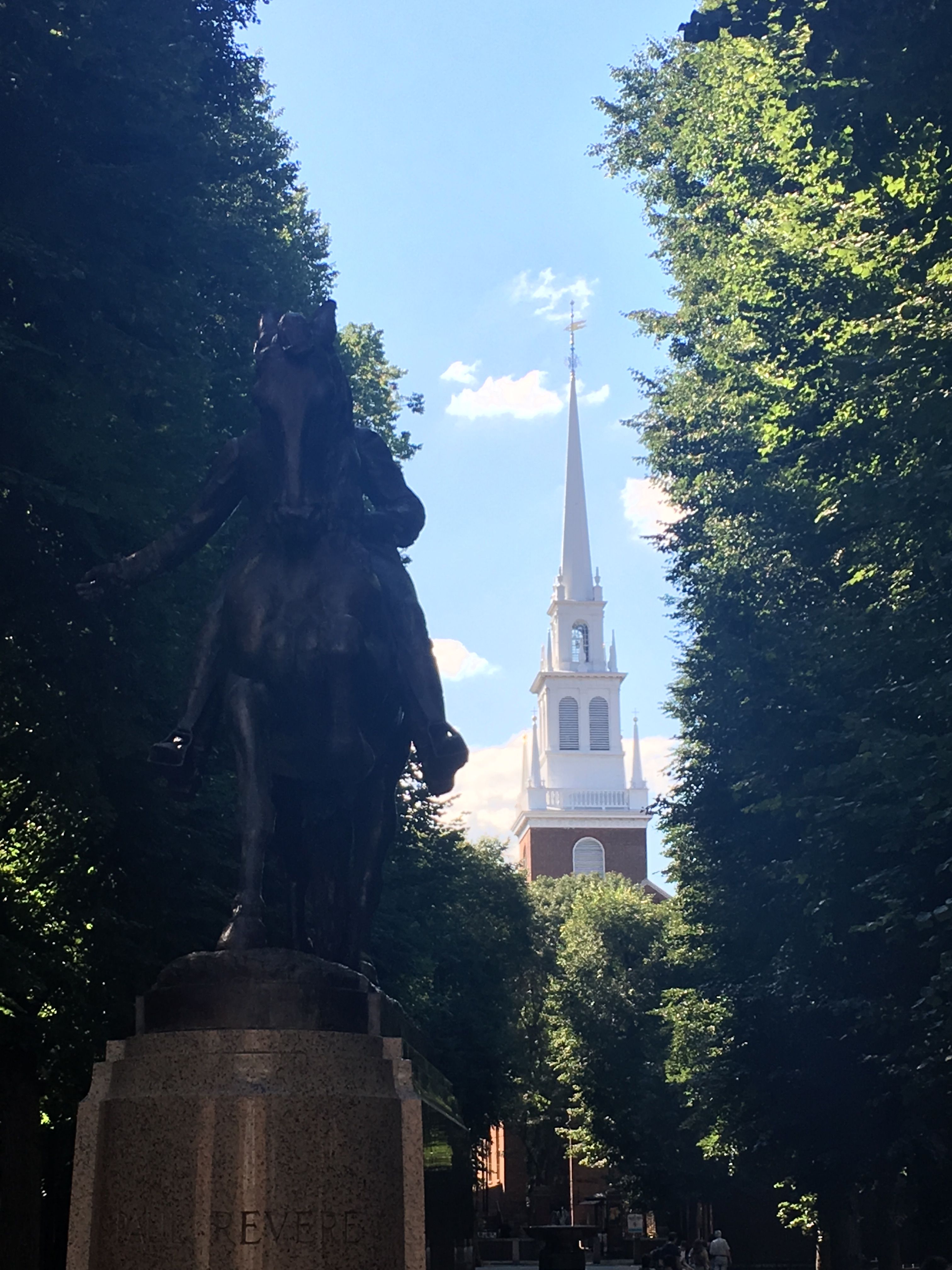 and the “Bunker Hill Monument” have such a profound amount of historical significance they are hard to overlook. We walked through “The Paul Revere House” and remarked at how great the building had been cared for. At over three hundred years old, you can hardly hear a board squeak. LOL, just kidding. It’s very squeaky, but charming nonetheless. We meandered our way through the maze that is Boston for quite some time, exiting and entering the trolleys. Until we finally decided that it was time to see things from the water. Out tickets for the trolley included a water tour as well so we ditched dry land and hit the high seas. Or at least the bay.

This was where I heard some of the most interesting facts about the city. Over half of which was built ON the water. Sort of a giant landfill. It’s hard to believe until you see brand new condominiums perched on an enormous swath of claimed land. Supported by hundreds of pillars underneath. Impressive is the only way I can describe them. We were told that this claimed land was also some of the most expensive in the city, if not the world. One particular residence boasts the insanely high sales price of $3.5 MILLION dollars for a fifteen hundred square foot townhouse. The narrator went on to say that price included “one deeded parking spot in the city”. The “USS Constitution” was docked for repairs, though we did manage to see the masts and rigging as we passed by.

Once the ship landed back on shore we hopped on another trolley and headed back to where we started.
We said our good-byes to my aunt and cousin as they had to catch a train back to their towns. It was nearing dinner time and I, for one, was ready for a sit-down meal. Once again, my smartphone map was useless and we basically wandered into the first recognizable restaurant we found. Hard Rock Cafe was just what I needed. A hot, juicy, delicious Guinness bacon cheeseburger made me feel right as rain. One Crown Royal on the rocks for good measure and I’m calling it a day. Time to find our parking spot and make the trek back to our rental house for the week.
Every good travel story usually has at least one dilemma along the way. Ours was on the ride home. Before leaving the Cafe, I asked the kids to all use the facilities. A certain little girl decided that she didn’t have to go. Now fast forward an hour and she simply cannot hold it any longer. I’m not quite sure how, but there is a stretch of road in between Massachusetts and Rhode Island that is at least six dimensions away from any civilization. The trees flew by, road signs everywhere. And not a single exit for what seemed like a good hour and a half. Then there it was, the “golden arches” with a blue arrow underneath directing me to veer off this endless snake of pavement. The truth is, the sign lied. There was no fast food heaven here. No soft drink fantasies. No french fry delight or hamburger bliss. No restroom in sight. Just another sign, with another arrow. “Should I follow it”? I asked my wife, “Might as well, we’re off the highway”. Her logic is usually spot on, so I went for it. Barreling down this twisty turny road for three to four miles surrounded by nothing but trees. “I have to turn around, this seems too far”. And that’s exactly what I did, much to the dismay of the occupants. The groan of teenagers in angst is enough to turn any parent from Mr. Rogers nice to Mr. Hyde mean in the blink of an eye. “Quit complaining” and “Quiet down back there” were all I could muster. Yes, there was some explicit language involved and no, I’m not proud of it. MY daughter had started all of this after all. Trust me when I say, my blood pressure was boiling at this point for no reason. The trip back to the highway lasted forever and we still hadn’t found a place for the child to relieve herself. “Everyone hold on”. I exclaimed as we made the spiral of the on-ramp. Ninety-five is the name of the road and I just may have hit that speed as the tension built. I can’t drive fifty-five comes to mind when I think back. Good times. The sign was directing us to the right place, it just failed to mention that it was 10 miles to the next town, and it is way easier on the highway. We made the restroom with seconds to spare. After we all settled back into our safety belts the remainder of the return voyage was a breeze. And we were pleasantly greeted back in Connecticut by the neighborhood kids lighting off fireworks. Happy Birthday America.