My most challenging winter hillwalk, to Carn na Caim near Dalwhinnie

A hillwalk in minus 15˚C windchill was not really the plan. The forecast was for bright sunshine, so we took time off, made our arrangements...

...and then the forecast deteriorated. 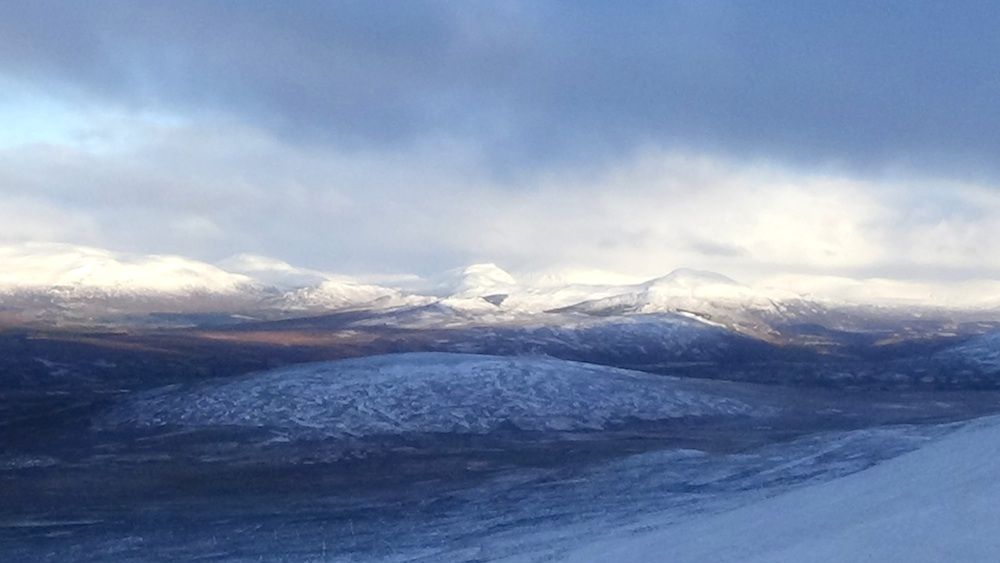 If gale-force winds or thunder and lightning had been forecast, we would have had to change our plans, but minus 15 just meant that we had to be even more careful in our preparation.

It turned out to be a challenging, but very enjoyable day. The first challenge was to find a hillwalk that could be accessed from a main road, as the cold snap meant that my car would be unlikely to make it up the high-altitude isolated icy road near the hill we'd originally planned to climb. We decided on Carn na Caim and A'Bhuidheanach Bheag, two Munros (mountains higher than 3000 feet or 914m) near the Drumochter Pass, on the A9, a major trunk road. 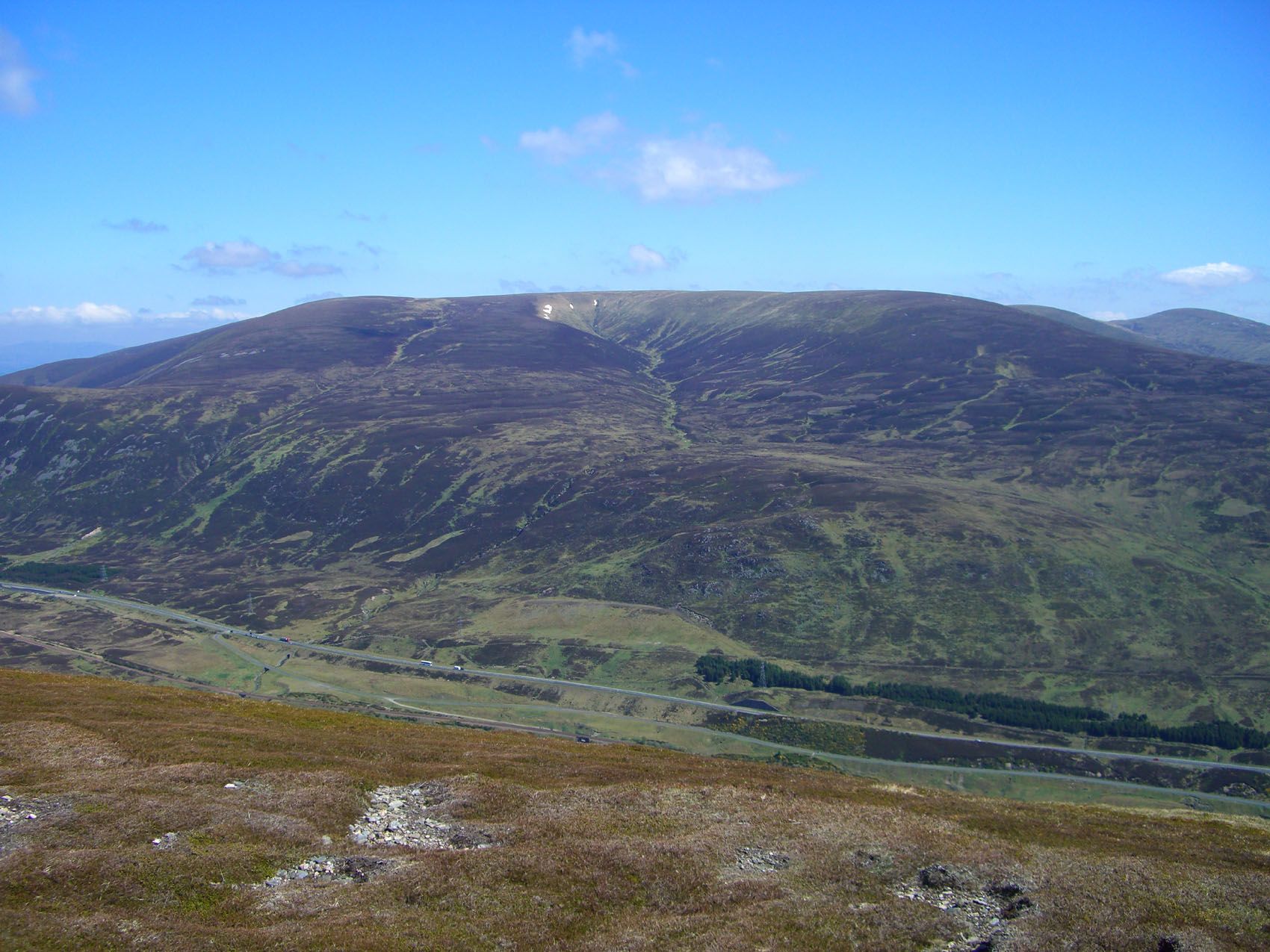 The other reason we chose these particular hills is that they are relatively easy to climb, without having to negotiate steep rocky sections. I love climbing over rocks, but I have very little winter walking experience and I'm not quite ready for steep, icy descents yet.

Another challenge of winter hillwalking in Scotland is that we have very limited daylight at this time of year. Sunrise that day was at 8.30am, and sunset was just seven hours later, at 3.45pm.

Some walkers save time by setting out before dawn, but one of my friends was travelling part of the way by train, and that restricted our travelling time. We set off at 8.30am, hoping that we could complete the walk in seven hours. Walking in snow always slows you down a bit, and climbing these two hills in snow-free conditions would normally take 5 to 6 hours, so we were hoping we could complete the walk in 7.5 hours.

The walk starts at an altitude of 400m, so it was only another 500m of ascent to reach the summit plateau, at 900m. It took us exactly two hours to reach this point, which we thought was good going, as we were trudging through knee-deep snow at times. 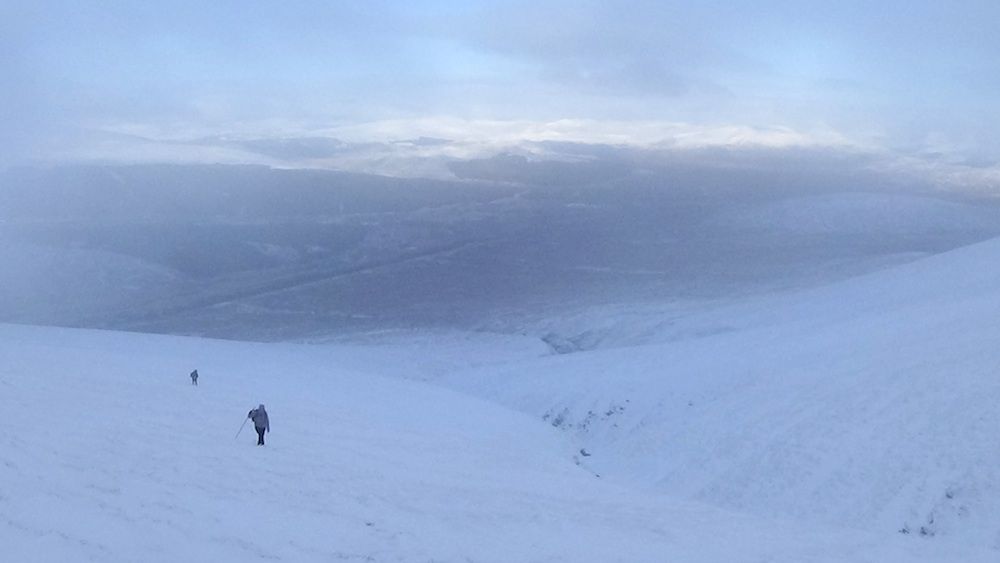 But from there, the walk became a lot more challenging. A stubborn cloud base had settled over the mountains from about 700m up, making visibility very limited. At times we found ourselves in white-out conditions. I was thankful to have tinted snow goggles with me, because it was often difficult to differentiate between the snow and the sky. 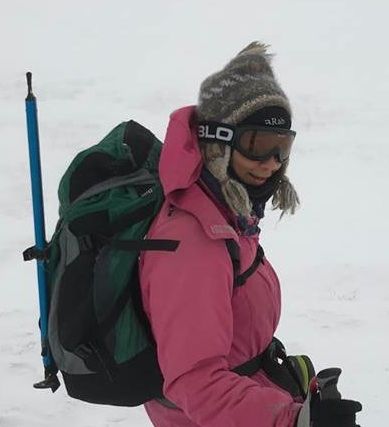 It took us almost two hours to reach the first summit, mainly because the snow was intermittently quite deep, which made walking very tricky. 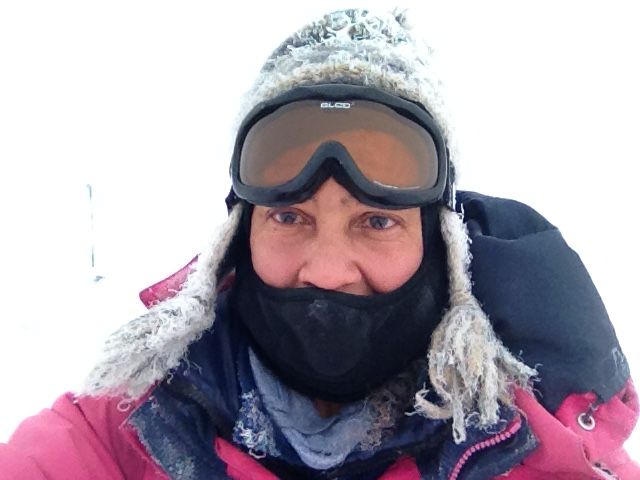 Me at the summit. It was so cold that the handkerchief I'd been blowing my nose on froze solid!

It was a case of three steps forward, two steps up to your knees – or at times, up to your hips. Going back the way we'd come was only slightly easier, because we were mostly able to walk in our own footsteps. There were no other footsteps for us to walk in, as there was no one else about – only a few mountain hares. 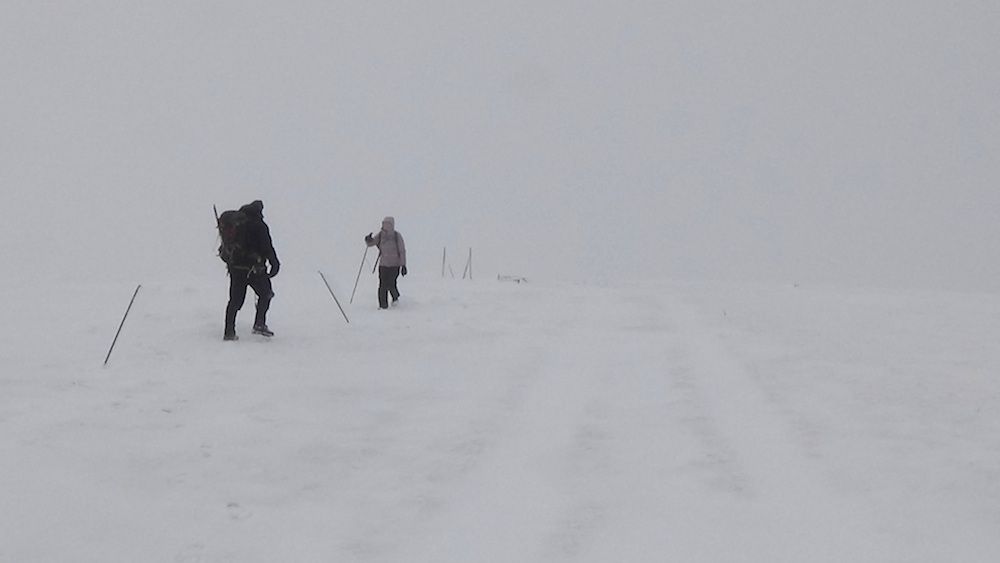 By the time we were back at the bealach (the lowest point between the two mountain tops), it was 2.10pm, and there were less than two hours of daylight left. It was roughly the same distance to the summit of the second mountain as the first one, which had taken us three hours to reach and then return from, so we decided to abandon our plans to reach that second summit, and to return to the car. Hopefully we'll be able to return on a sunnier day and get some great views from the top.

All the time we were on the summit plateau, there was a constant westerly wind blowing at about 30mph, keeping the temperature well into the minuses. The forecast that morning had said it would feel like -14 to -15 at that altitude, and it certainly did! 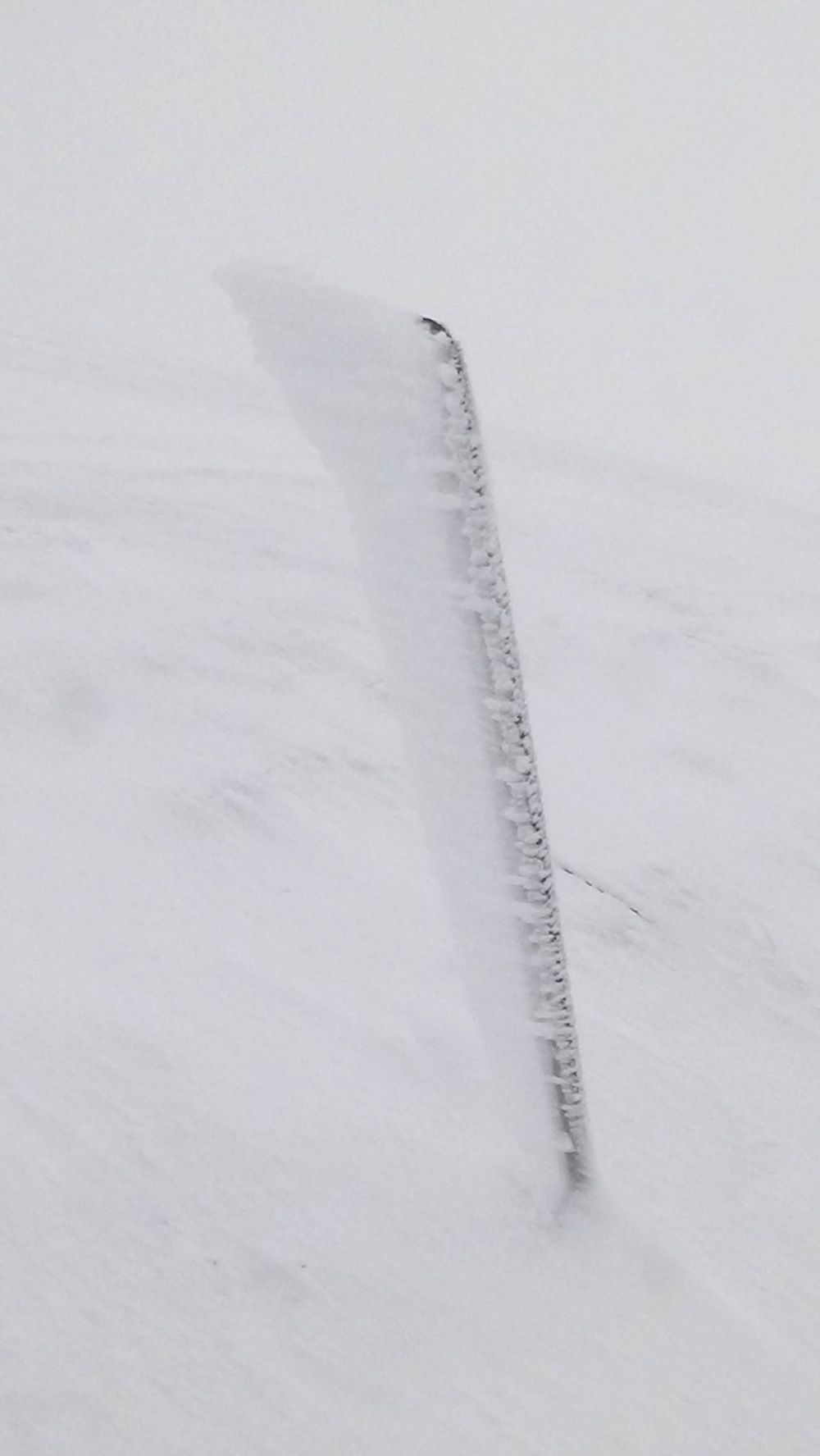 I had bought a good quality balaclava with ventilation for breathing the day before, and it was well worth the £30 it cost me. It meant that I was able to keep my entire face, head and neck covered, but still breathe, talk, without steaming up my goggles! £30 is more than I would normally spend on a small item of clothing, but I think I would have felt quite miserable without that balaclava!

Despite the tough conditions – maybe partly because of them, I thoroughly enjoyed the day. I think all three of us did. It made us feel we could survive in almost any conditions. It felt like a test of my fitness, one that I successfully passed.

The night before the walk I'd had hardly any sleep, as I honestly didn't know if I was up to doing a tough winter walk. I thought I might get too cold, or run out of energy, or that my winter boots might make my feet hurt. I had only worn them once before, on a winter skills course about 10 months earlier, and I had ended up getting a blister. My winter boots are several decades old. I bought them online from an outdoor gear exchange, for just £10 (about $13.50). They must have been meant for me, as they fit perfectly, though they are very heavy. Most modern winter boots are heavy and stiff anyway, and many people find them difficult to get used to.

I had been advised to wear two pairs of socks to prevent blisters, and it worked. I had worried that my ancient winter boots might slow me down, and that my friends might have to wait for me – but it was actually the other way round! All the time I spend on the climbing wall seems to have worked wonders for my fitness, and it certainly targets the muscles that you use for hillwalking.

My feet did get a bit cold at one point – surprisingly, this was when we were trudging up the steep bit of the hill. I'm not sure whether this was because of the old-fashioned design of the boots, but luckily my toes thawed out after a while. I'll try to find some better insulated socks to wear with these boots.

And my fingers got cold when we sat in my friend's storm shelter to eat our lunch, and I put on a lighter pair of gloves to eat with. But they soon thawed once we got moving again.

Apart from those two occasions, I really felt as warm as toast for the whole day. I was wearing so many layers, and I was very relieved that my clothing choices worked.

The weather in Scotland can change so fast, especially at altitude, that the weather forecast is really just a guide. You have to be prepared for anything. But that's all part of the fun!

Despite the challenges, I enjoyed every minute of what was really my first full-on winter walk. More snow is forecast for this weekend, and I just can't wait to get out in it again.

A brave lady like you deserve to be upvoted. Amazing, that place is wonderful but I can't stand on that very cold place...

Thanks keensleigh! It's fine if you wear warm enough clothes :)

Never tried that kind of weather yet as I live in a tropical country...Thanks for encouragement, I appreciate it!

you have captured perfect shots!

wow. the way you took me through your experience was super nice to read :D You certainly are a good story teller and you put some useful advice in there as well.

I want to include those kind of hikes into my videos and articles I do here on steemit and youtube.

Thanks for sharing and the inspiration;)

Thanks mocore. Really glad you appreciated my story! And good luck with your hiking articles.

Wow, it seems like your hike was very challenging but very rewarding. Great to hear you came out on the other side on top!

An excellent walk. The cold didn't hurt to climb the mountain.
Excellent post and photos.