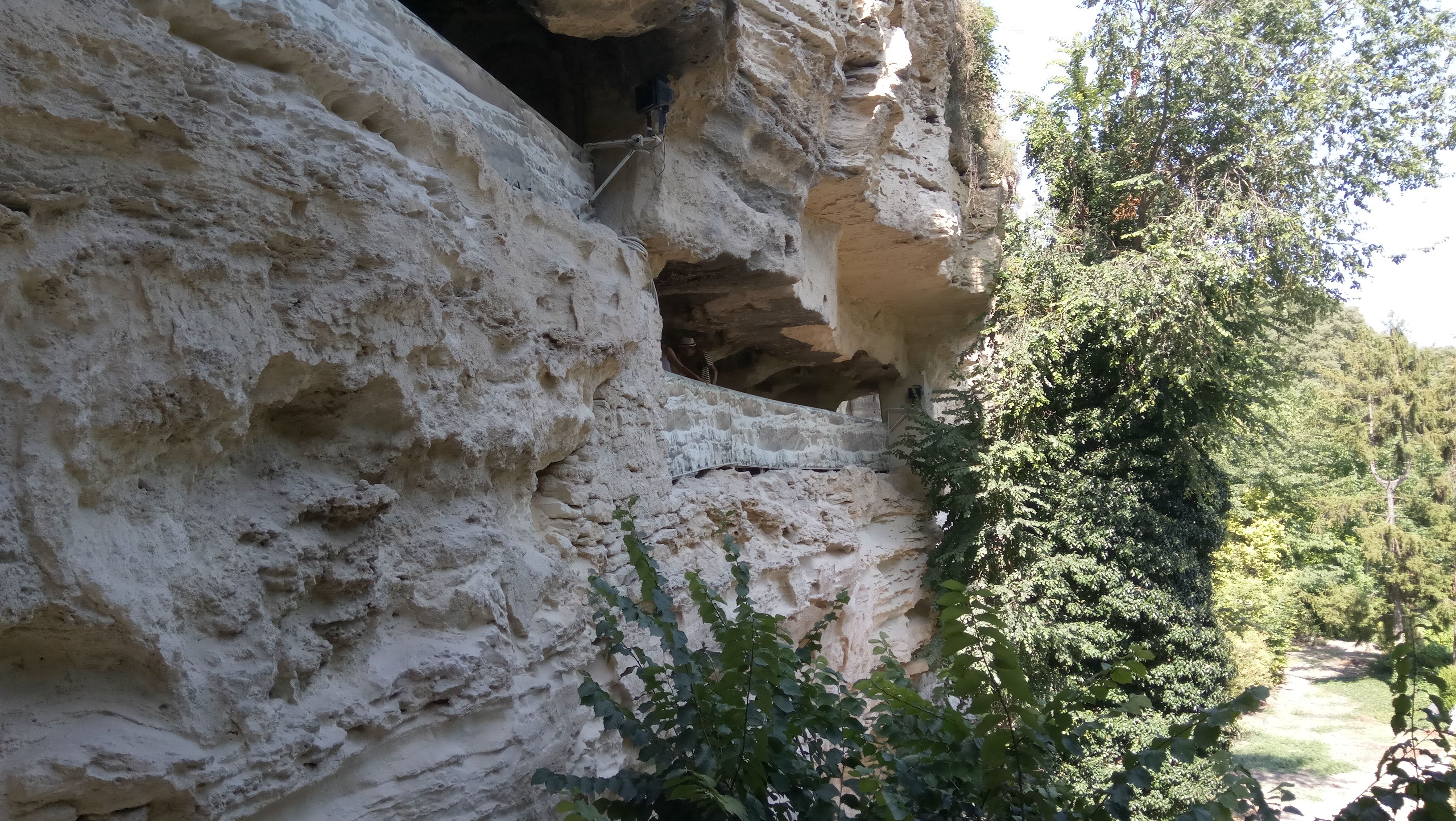 Hello friends. Today I wish to present to you my trip to Aladzha Monasteries near my city. The place is full of exhausting and breathtaking views. Let's enjoy it. 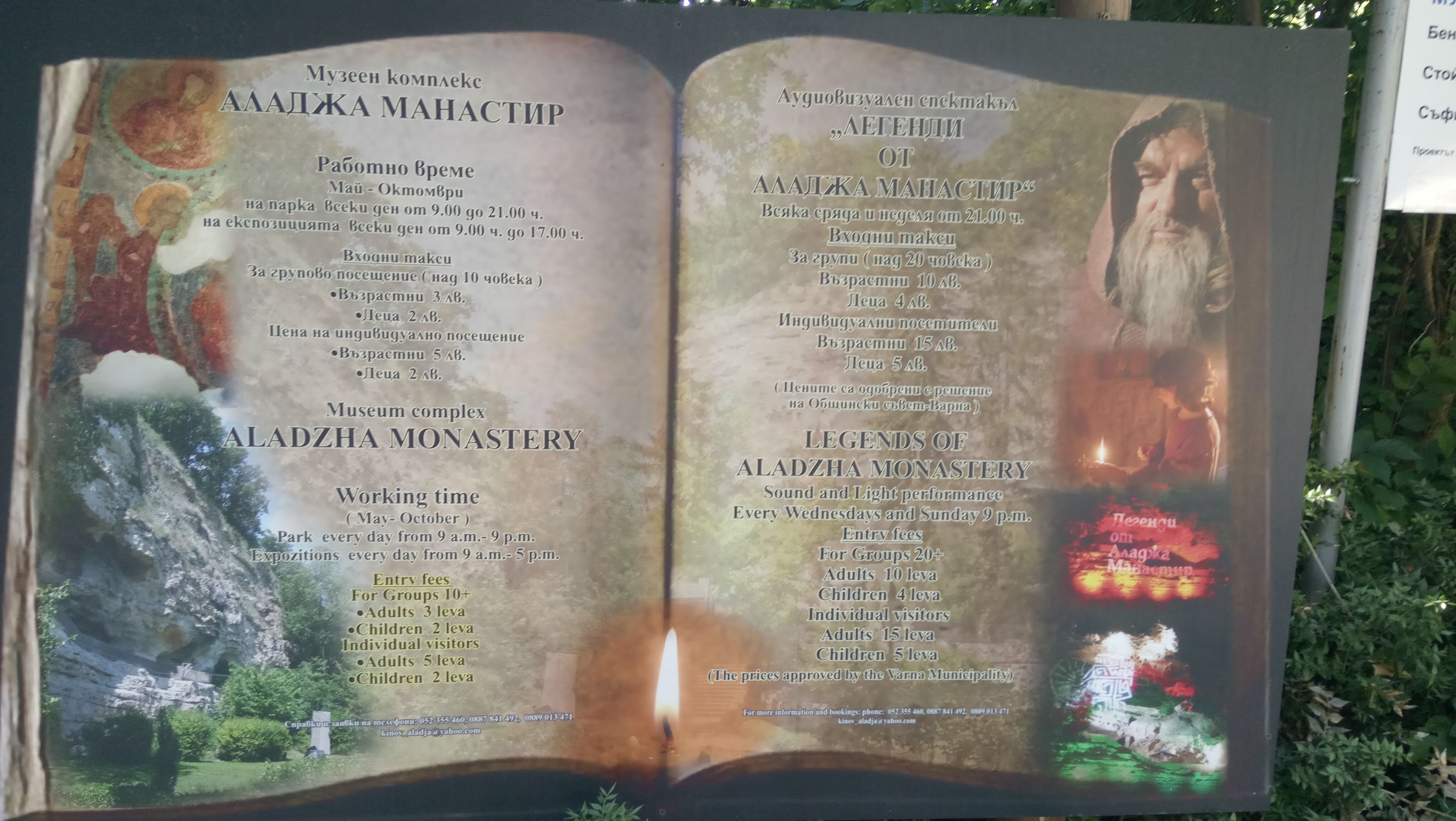 Historical reference from the Varna Diocese of BOC

Aladzha Monastery 14 kilometers east of Varna, near the resort Golden Sands, is the famous rock monastery "St. Trinity", called by the population "Aladzha", which in Turkish means "colorful".

The monastery is supposed to have originated in the Early Christian era, but it was not built until the 10th century, when the retreat spread throughout the Bulgarian lands. During the years of the Second Bulgarian State, under the influence of the Hesychast movement, the rock monasteries in Bulgaria reached their greatest development. Then the Aladzha Monastery celebrated its bloom.

The first notice of the monastery is contained in one of the letters of the Russian archaeologist Victor Teplikov, who visited the Bulgarian lands in 1828-1829 and studied some ancient archaeological monuments in northern Bulgaria. The Aladzha Monastery is also mentioned in the studies by Konstantin Irechek. The first comprehensive study was made by K. Shkorpil, who in 1889 explored the cave and made a constructive plan.

The erection of the two-storey monastery premises continued through different periods. First, on the first floor five monk cells were created, connected with a narrow corridor along the edge of the rock. The northern end of the corridor ended with a narrow staircase leading to a wrongly rectangular room serving as a monastery temple.

On the walls of this little church today are still visible traces of the old painting. In a later period, the small monastery chapel, also painted with murals, was carved out of the upper floor of the rock complex. Unfortunately, today they are almost completely damaged.

Written information about the life and cultural activities of the Aladzha Monastery during the years of the Second Bulgarian State are not preserved. It is supposed that it continued to exist during the Ottoman rule. The monastery was inhabited until 1940, after which it was a museum. 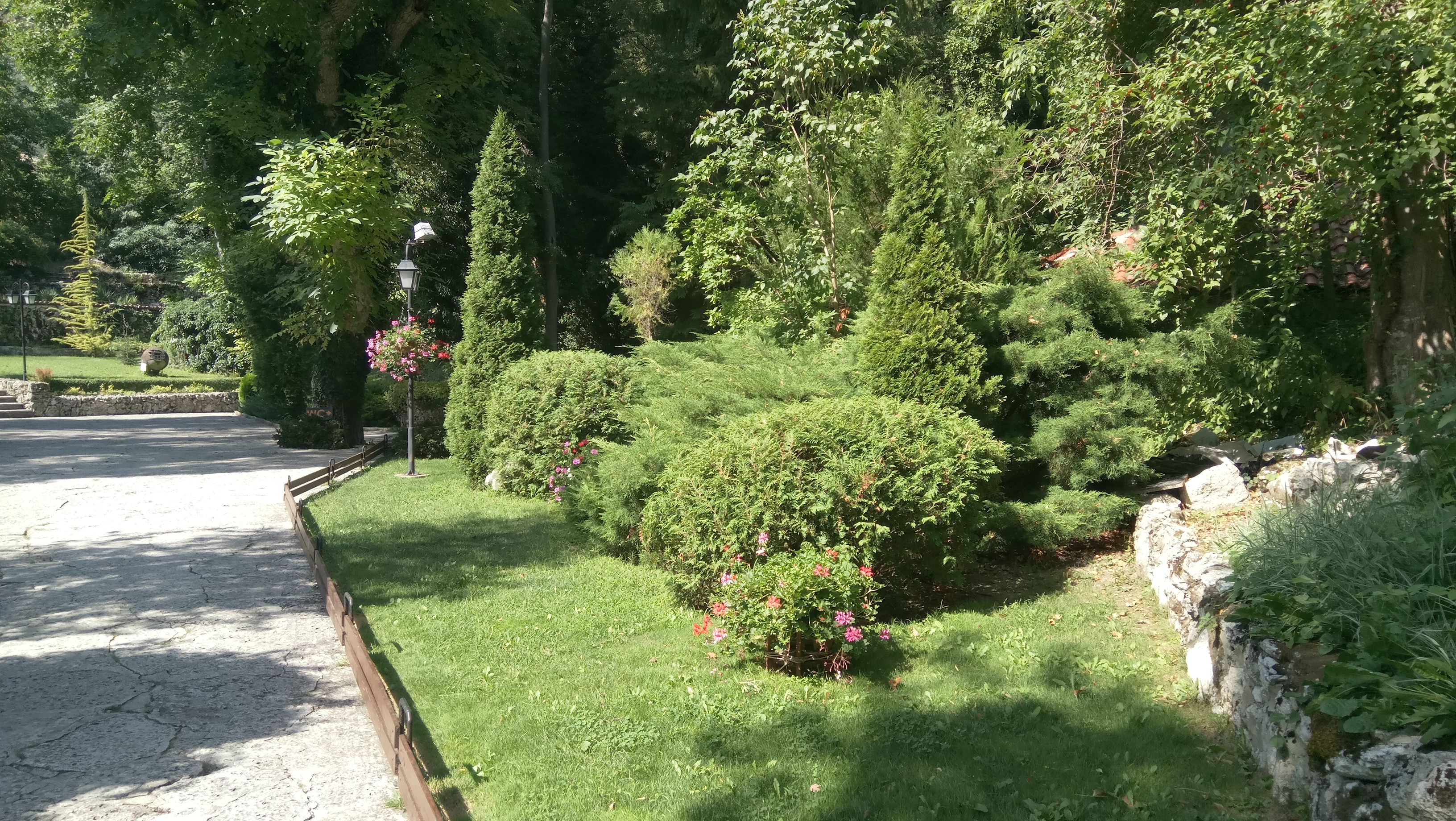 Aladzha monastery is located about 15 km north of Varna, 2 km from the seaside and from the Golden Sands resort. Similar rock monasteries and settlements have the northern and eastern shores of the Black Sea (Crimea and Georgia). A number of natural and artificially carved and expanded premises have been preserved in the vertical rocks, which are used for cellars and churches of the ascetic. They are located on three or four levels in the rock wreath, the "floors" being connected with paths, stairways cut into the rocks, and somewhere with narrow artificial passages. Their inhabitants used the alternation of the soft and hard layers in the rock structure, the distance between which is about 2-2.5 meters to create the "floors" of this monastery complex.

There was a life here in prehistoric and antiquity. The settlement of monks-ascetes probably dates back to the 11th-12th centuries, but it is not excluded earlier, as an early Christian tomb with frescoes was found in the nearby Osenovo, and in Varna there were objects from the early Byzantine period. Most likely, life in this cloister dies at the beginning or the middle of Ottoman domination. 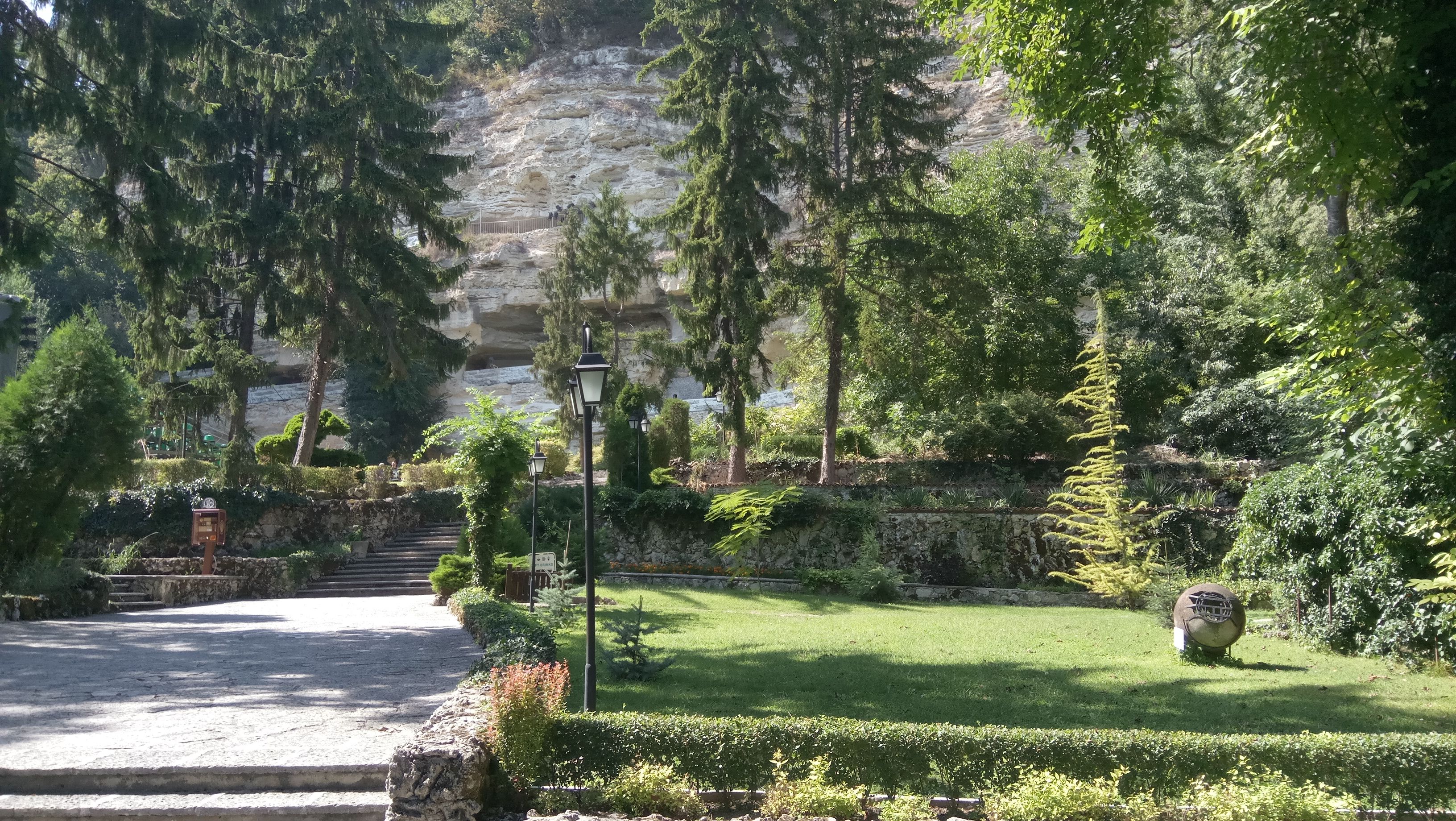 The original appearance of the monastery today has changed significantly. The major collapses and collapses destroyed some of the rooms. Now there are remains of twenty rooms and three churches. Traces of frescoes suggest that they have been decorated with traditional church paintings. The entrance of the monastery is probably in the eastern part, where remains of a wide staircase and corridors are visible. On the second floor is one of the churches. Its eastern side is preserved with a part of the apsis niche and the northern wall. There are traces of plaster coat with images of saints in full height in hierarchical robes. The mural painting is cut and there are traces of a newer plaster, which speaks for a second painting layer. 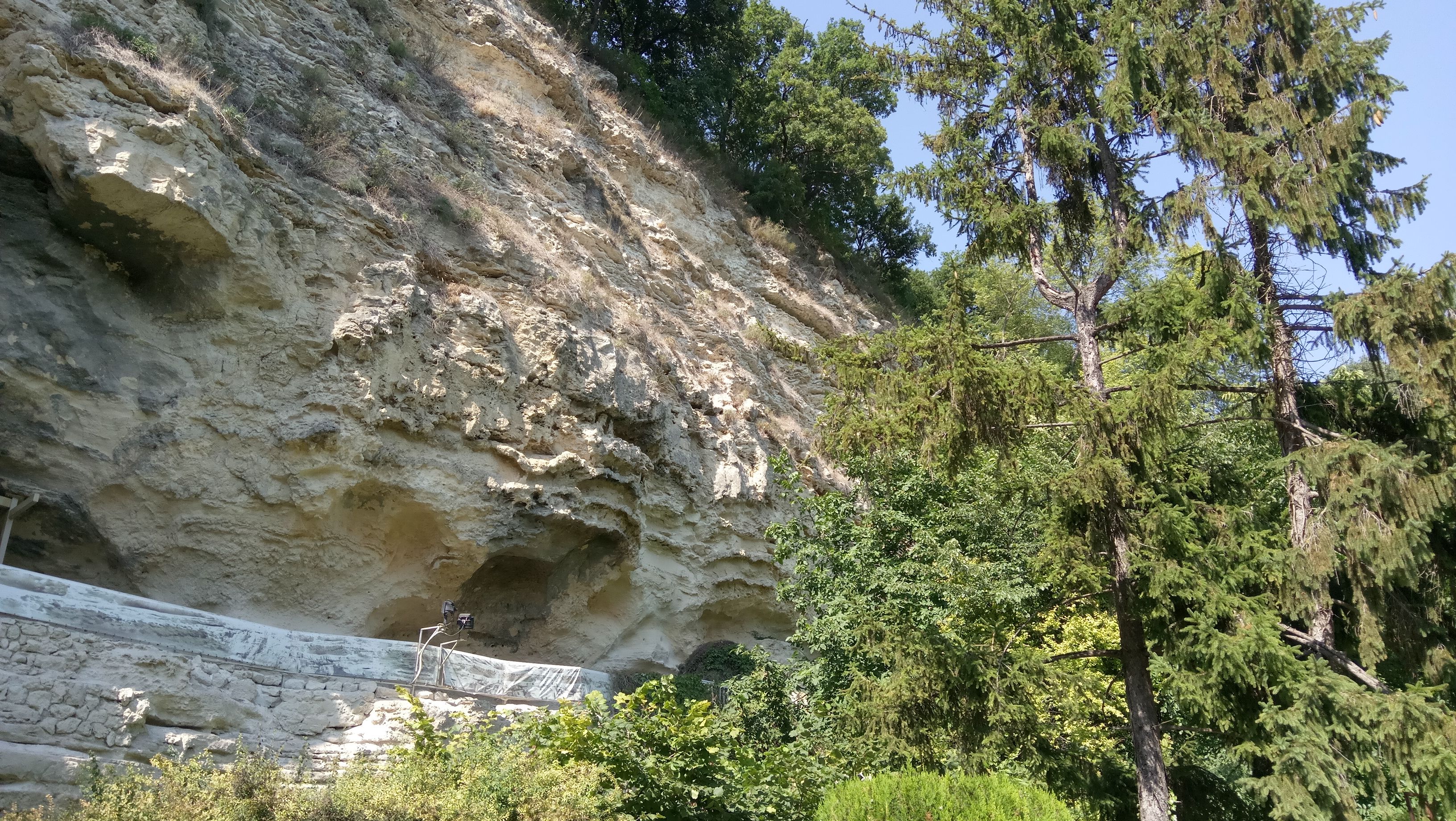 The most extensive church room is on the second floor in the western part of the complex. This is a large room, 12 meters long, up to 5.70 meters high and 1.95 to 2.05 meters high, almost entirely in the rock, with a complex architecture in the east. Only the western part of the southern wall has fallen. Almost the center of the eastern wall has a preserved flat apsis niche, outlined by two columns, which at the top were connected by arches with two other front columns. In this way, an altar throne, carved on top of a canopy, was formed here. In the altar where there were the proconsidia and the diaconicon there are small niches carved out. Deep grooves and nests, cut into the walls and in the vault, determine the location of the wooden iconostasis. The naos was also separated by a wall from the room to the west (anteroom). In the middle of the antechamber, a deep, narrow staircase with nine stairs was cut through which the church entered and went through a long corridor from the lower floor. Along the entire northern wall of the naos and the antechamber there is a stone bench seated on the rock. On the eastern side (mainly in the niches) of this interesting temple are preserved remains of fine white lime plaster, on which there was painting. The characteristic red frames distinguish individual images and scenes, nimbuses and other elements.

The third and best-kept church is a small chapel on the top floor of the complex. It is the bottom of a later created long corridor. Its southern wall is artificially masonry, as most of the southern walls of the premises. In plan, this small church is rectangular in length (along with the apse) - 3.50 meters, width - 2.60 meters and height - 1.90 meters. The ceiling is flat, forming a nearly regular parallelepiped without any special architectural features inside but the semi-circular apse to the east and a small window-port in the south. 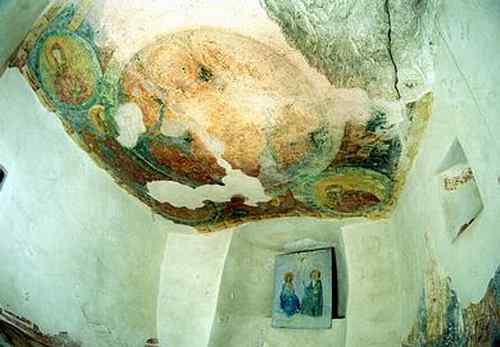 Only this room has preserved wall decorations. It is most legible on the southern wall where there are fragments of five straight figures of saints, mostly reverend (monks). Even better is the decoration of the ceiling, where in the ce

Submit
$5.77
49 votes
20
Authors get paid when people like you upvote their post.If you enjoyed what you read here, create your account today and start earning FREE STEEM!
Sort Order:
[-]
lovejuice (61)  ·  2 years ago

This post has received a 2.07 % upvote from @lovejuice thanks to: @nakedchef89. They have officially sprayed their dank amps all over your post rewards. GOOD TIMES! Vote for Aggroed!

Support me and enter here https://steemit.com/help/@gr3g0r/hi-i-m-from-venezuela your collaboration is important @gr3g0r Follow Me! Hi @nakedchef89 , Great Post - Epic ! , I upvoted you and followed you , feel free to read my posts and upvote and follow me too if you like my stuff ^^

I live in Sofia, but have been to Varna many times.

This post has received a 0.82 % upvote from @booster thanks to: @nakedchef89.

What an extraordinary and beautiful place to visit! Thanks for the wonderful pictures. Those bare rock rooms are amazing. Cool and meditative spaces for sure. The gardens are also beautiful and kept nicely. An amazing experience.
I am following you now with interest - your blog looks fascinating. Have a beautiful day.