It's a privilege to be able to travel to places that are completely unfamiliar to you to the point of hitting you with culture shock. Particularly when the company pays for everything and you're left with an experience of a lifetime that you will never forget. When you return to your quiet and humble home, you will find yourself wanting to return to that exciting, strange, and alien space where everything is a new surprise and you can't possibly fit everything in for the allotted time that you are given.

I was sitting on a comfy padded chair on the back deck of my chosen home for that particular southern summer. Feet propped up enjoying a beer on this warm and pleasant Friday evening listening to some tunes as is my normal custom after a particularly frustrating day at work dealing with clients and various broken tech in my office space. My work cell made a notification sound. Irritating. Expecting some sort of emergency caused by another client's abuse of equipment, I found myself surprised at an email from my boss indicating that the out of town trip he had previously mentioned to me would be a month in Chicago for conference and training purposes.

I'm a pretty non assuming and sort of mundane southern person. I'd be completely out of my element obviously. I know very little about large cities, metro traveling, or dealing with hordes of people. After all, my town is maybe 20,000 people and only so because of the state university located 10 minutes away.

You could definitely imagine how I felt at the moment.

Some of you will be from the area, some rural dwellers like me, and many from outside of the states. Chicago may have a shitty reputation in the media for shootings and violence, but I never found myself in danger and only once or twice harassed by homeless who did nothing more than badger me for change. Typically airports suck, but the O'hare airport had a nice addition to it. 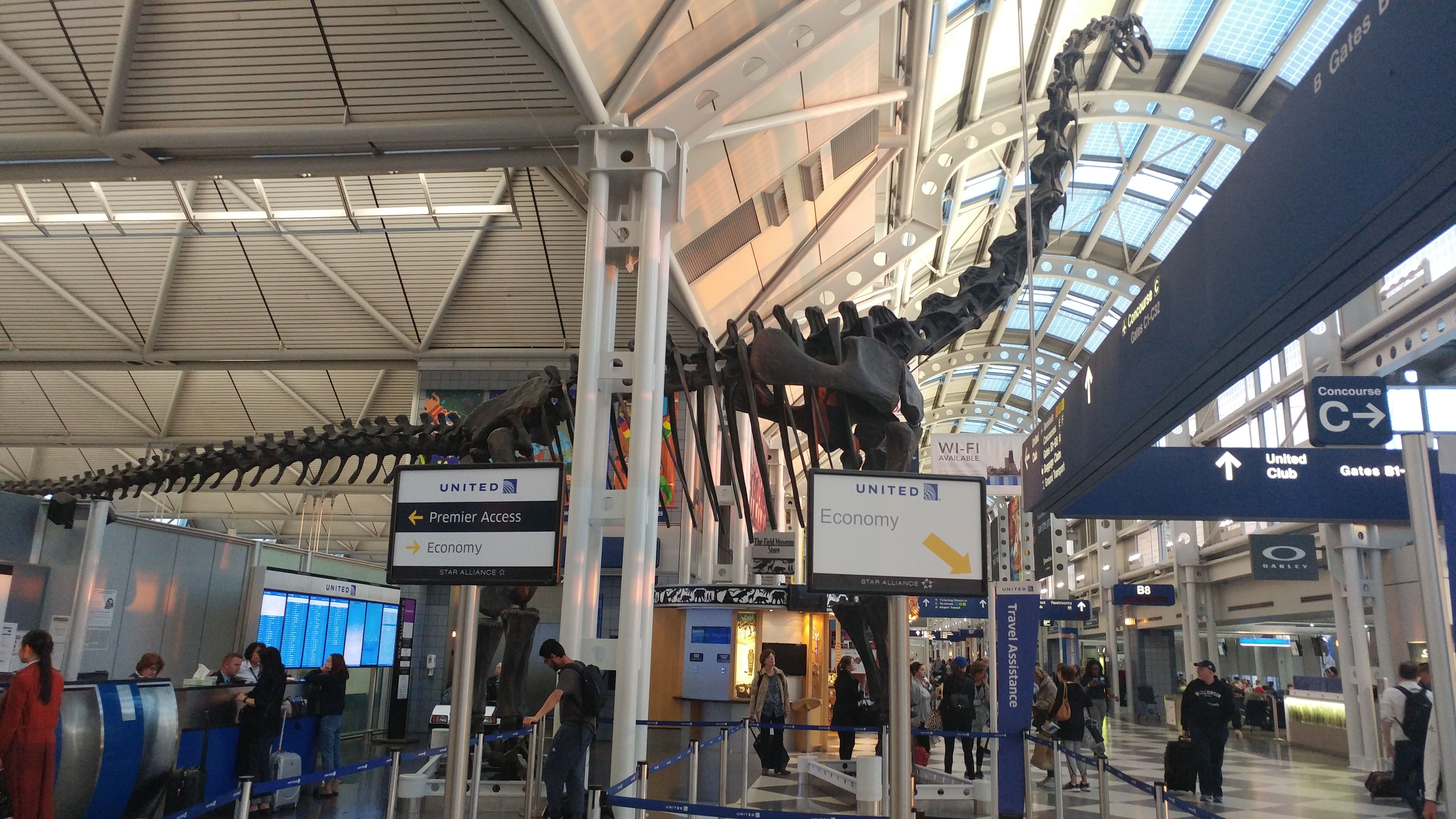 The food was stellar, the city was entertaining, and I spent 8 hours in the field museum without even seeing the whole of it. I'm particularly irritated that I missed the Egyptian and Tattoo exhibits. The trip and photo album is too big to cram into one post, so I'll have to break it up. The Chicago Field Museum is an extremely impressive building that contains an even more impressive collection of animal and anthropological specimens ranging from fossils, to Native American war bonnets. My photo of it is nice, but it doesn't do the columns and attention to detail justice. The building is incredibly ornate, and it would have probably been a good idea to include a banana for scale. For now, let's concern ourselves with the centerpiece and most prized possession of the Chicago field museum. Sue the T-Rex. 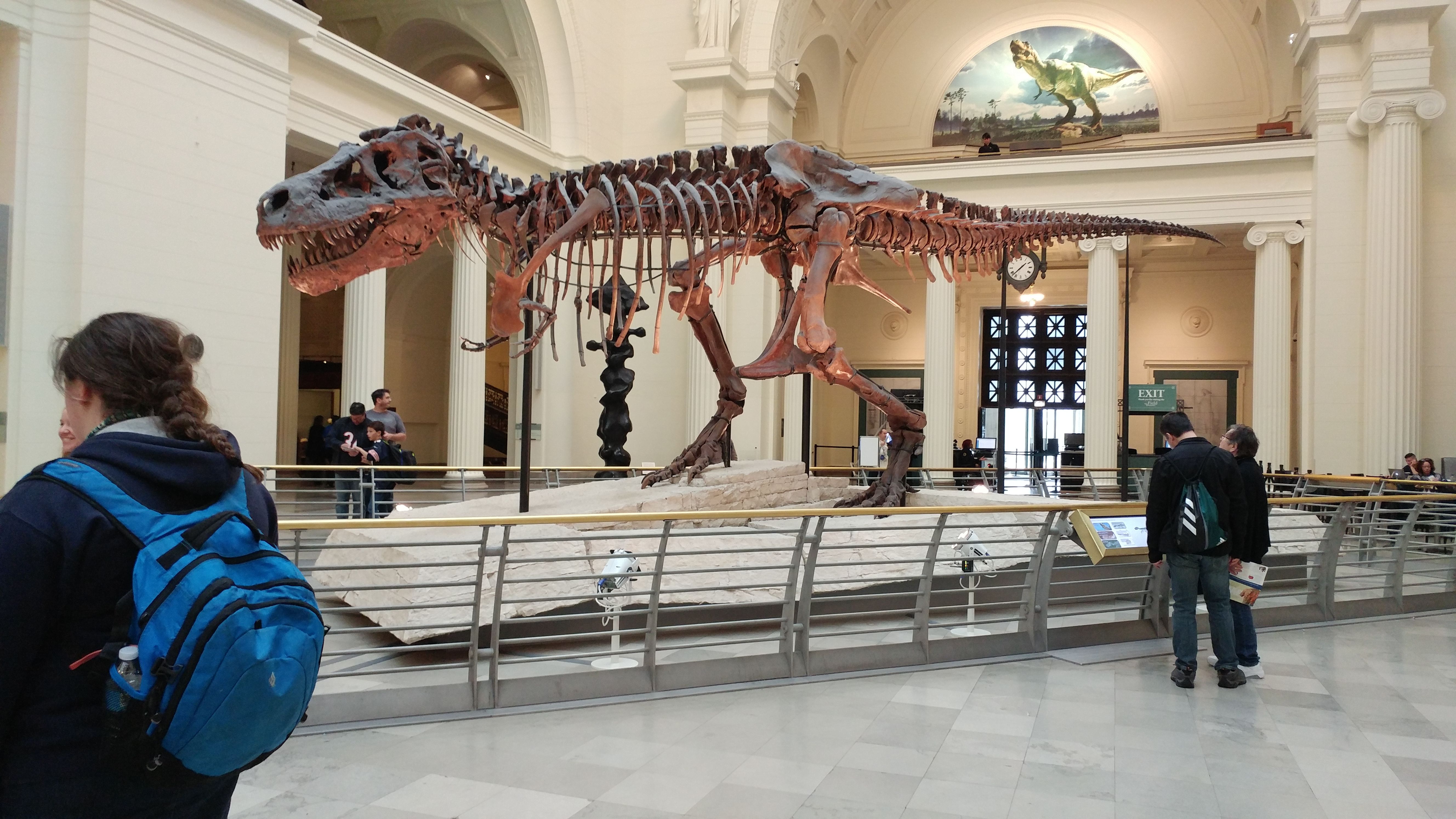 Sue is the most complete T-Rex fossil that has ever been discovered and it is incredibly impressive. As with all fossils, the animal's sex is unknown, but the nickname Sue was given in honor of the discovering Archaeologist. (Sue Hendrickson) It was discovered in 1990 on a Cheyenne native reservation located in South Dakota. While most T-Rex fossils are missing approximately half of the original skeleton, Sue is estimated to be about 90% complete. Archaeologists believe that the fossils are so well preserved and complete because the animal was covered in water and mud relatively quicly after it's death. Close study of the fossils reveal that Sue had a myriad of injuries and health problems prior to her death. The Archaeology team states that the animal suffered damage to a shoulder blade, three broken ribs, and a torn tendon in the right arm. Further studies of the fossils indicates that the animal suffered from Arthritis, parasites, and gout.

It took months to design and erect the mount for the fossil before the painstakingly difficult work of reassembling the fossil upon it. During design of the mount, it was discovered that the skull portion of the fossil was far too heavy to be supported, weighing in at over 500 pounds. A suitable solution of casting a replacement skull was carried out, and the cast was mounted instead. As you can see in the photo with two puny humans for scale, the animal's size is terrifying. The animal was 40 feet long and 12 feet tall. A significant departure from the titanic monster depicted in the Jurassic park IP, but more satisfying I think in that the animal is not cartoonish. The animal definitely weighed more than your land rover though, estimated to have weighed between nine and fifteen tons. Probably something you don't want to step on you.

The separate skull display is equally as impressive and is located on the 2nd floor of the museum. Encased in glass is the animal's skull and teeth, neatly lodged into place by an outstanding team. 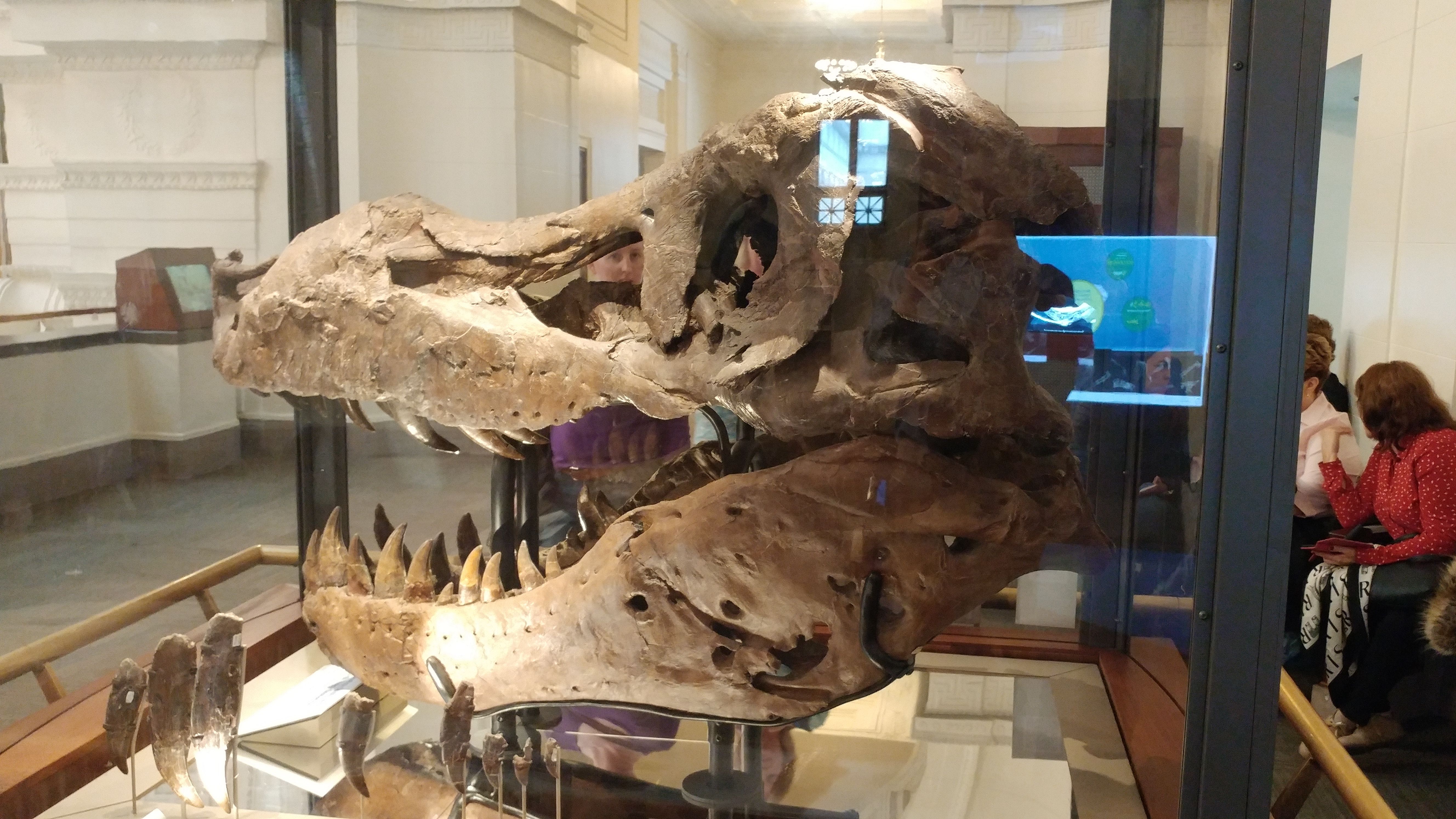 As you can see, the teeth are pure nightmare fuel. Something that most have us have imagined at some point in our childhood. Having a length greater than most people's hands, it's easy to see that the animal would have no problem decapitating many large animals. A Homosapien would be a light snack for such a beast. Being able to gaze at the fossilized skull that close is both a wonderful, and anxious feeling. Imagining it licking it's lips as it's eyes gazed down at you. There is a casted tooth on the outside of the display that you can feel free to interact with. No banana for scale necessary. 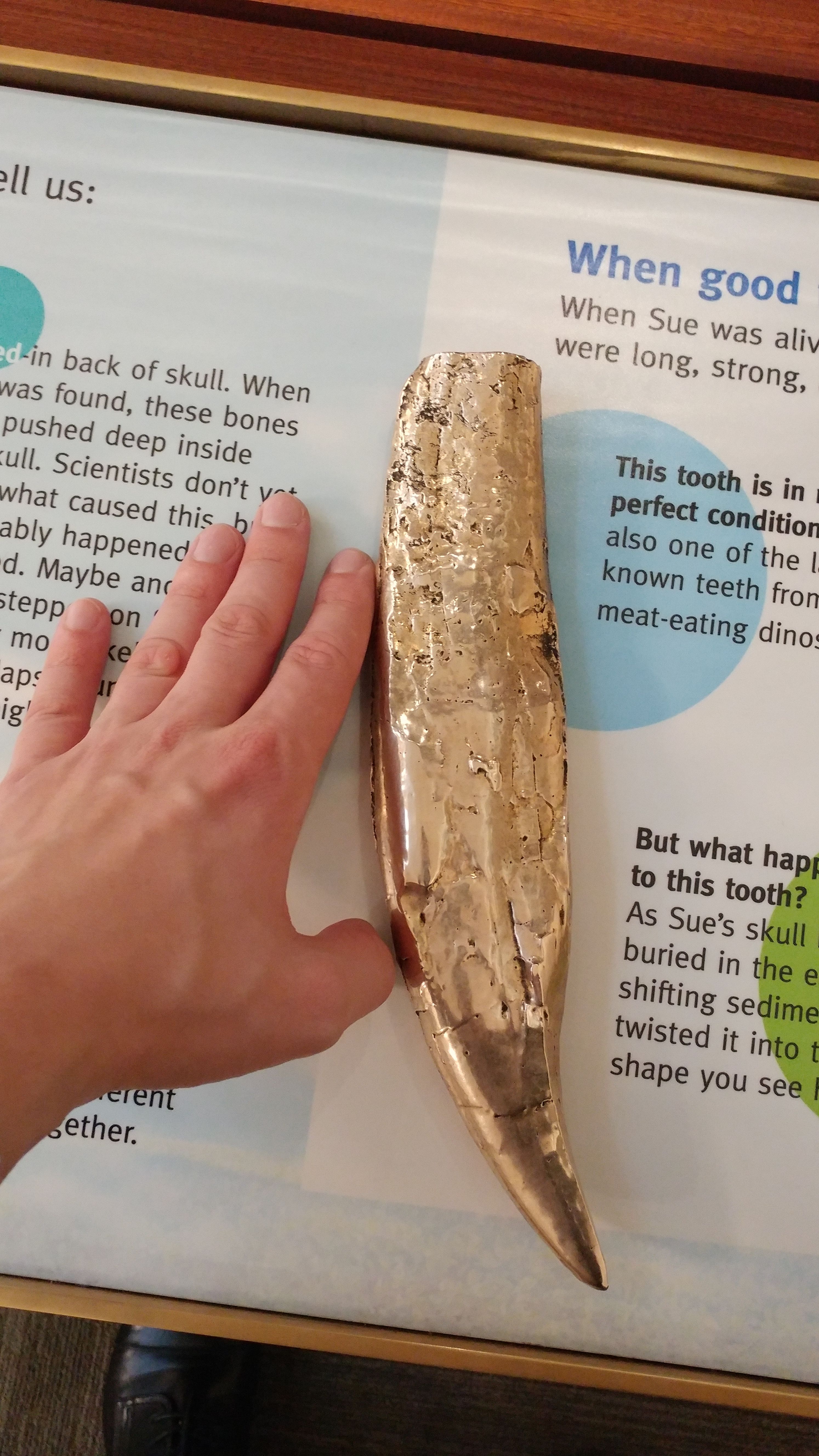 My hands aren't huge, but they are considered to be large. The other portion of this particular exhibit, is humorous. T-Rex are known for two things. Being huge voracious predators, and having underdeveloped arms. If you have a 6 foot wingspan, one of your arms is about as long as one of Sue's. The museum also has this casted for public interaction. As I've stated before, this is an extremely impressive exhibit that is worth the Museum's 20 dollar entrance fee all by itself. If you're in Chicago, this is a must see.