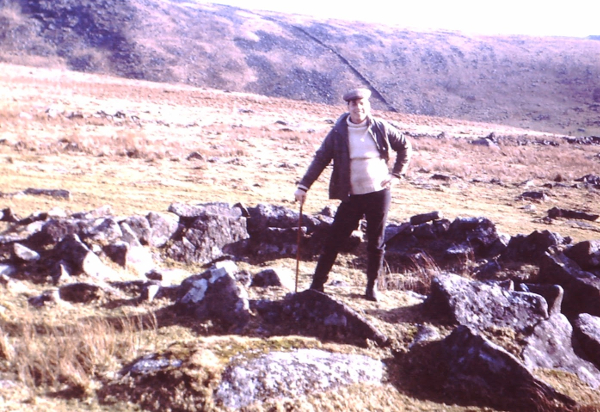 Lorenzo in a Hut Circle on Dartmoor - 1966
In 1966, I spent February and the first part of March in Europe. Much of the time was in Austria, where I visited my cousin Helen in Vienna. I also took the train to Innsbruck and Salzberg where I had many adventures. But my trip began in England where I visited with my friend Nigel Glassborow. Nigel and I served together on the sailing ships under the command of Captain Alan Villiers.

Nigel was a great tour guide. He set us up with dates to go to dinner in London at a restaurant called the Borscht and Tears, where a large group of rowdy Irishmen had us join them in chugging vodka and then smashing our glasses on the floor; which by the end of the evening was deeply covered in broken glass. I remember when Nigel first told me that we had dates, and he said we were to "knock them up" at eight. I still think that British expression is funny.

Nigel had this 1938 red Fiat roadster that we dashed around the countryside in, stopping in Oxford to visit Captain Villiers at his home, which was called Windrush. Then we went on down to the little town of Crapstone, where Nigel lived with his parents. They were actually quite well off, but only recently had purchased a refrigerator, which I discovered had only one or two items in it at the time. They also bought an electric blanket for the bed I used. When I mentioned it the next morning, Nigel was horrified that his parents felt the need to do such a thing for his guest who, since I came from the States, certainly must have always used one. We all laughed when I told them that it was the first time that I'd ever slept under an electric blanket. Nigel trying to decide how to get around a fallen tree in the road.

Nigel and I covered a lot of ground, visiting the dock in Plymouth whence the pilgrims departed in 1620, and we spent an afternoon wandering around Sir Francis Drake's estate. At the time, I didn't yet know that Drake was basically a pirate until he gained some respectability. But the high point was the day that we went up to the moors and explored the ancient hut circles, some of which may date back as far as 10,000 BCE.

Two days after returning from my European adventures I was in Newport, Rhode Island, having my head shaved and beginning my days in Officer Candidate School. Culture shock on steroids.

hi @lerenzohagerty! i love your story and photos! Pirates on water are also pirates on land :)

It is my goal to help support sailors on steemit by resteeming their content and upvoting their posts as much as possible!
But it looks like I missed a lot of good content from you.

If you use the hashtag #knot in your next sailing related post, i wont miss it!

Communities need to feel that they can accommodate people. Rather than feeling that it's not possible to integrate and that the stress and strain on housing and public services is too great.