Great Blue Hole is a submarine cenote located off the coast of Belize, Central America. It is protected within the coral reef of Belize. 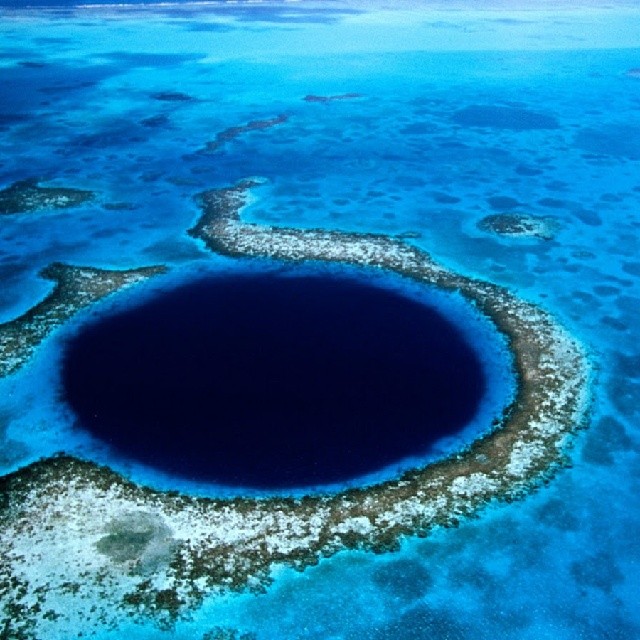 The hole is almost circular, with a diameter of more than 300 meters and a measured depth of 124 meters.

At the origin of its formation, during the last ice age when sea levels were much lower, it was a limestone cave. When the level of the ocean rose, the underground cavities were flooded, and the roof of this cave collapsed.

The cenotes are chasms or avens (abyss, geological formation characteristic of the karst regions) An aven is a cavity whose access opens in the ground and which presents on all or part of its development the shape of a well, this which makes it difficult to access without specific material.

The dimensions of the opening on the surface of these cavities are variable: from a few decimeters to two hundred meters, just as the depth can be impressive), or collapse sinkholes (form Characteristic of limestone erosion The dissolution of surface limestone leads to the formation of circular depressions ranging from a few meters to several hundred meters in diameter and their bottom is often occupied by clays, fertile and more or less impervious.

Local water supply makes them suitable for the development of a specific microclimate and rich vegetation, giving them a habitat and possibly natural refuge for many species), in karstic environment, totally or partially filled with a superficial layer of fresh water and sometimes a lower layer of sea water if they communicate with the ocean by faults or other conduits.

They are found mainly in North and Central America, and especially in the Yucatán peninsula in Mexico. They act as natural wells that can reach several tens of meters deep.
When a cenote is submerged under a lagoon or other body of water, it is called a blue hole.
The cenote Zacatón, in northeastern Mexico, is the deepest known in the world.

An autonomous diving robot explored and mapped it. It reached its bottom at 318 meters deep in May 2007.

The Mayas considered these wells as a means of communication with the gods of the infra-world, the chasm representing a mouth. They used them as a reserve of fresh water but also as a place of worship in which offerings or sacrificial victims were thrown.

The remains of this cultural heritage have important historical and scientific value. They are protected by the Convention on the Protection of the Underwater Cultural Heritage. The cenotes are produced by a phenomenon of dissolution and collapse of limestone lands located above an underground network of caves and rivers. They are found both in picturesque places in the jungle and in the city.

In Yucatán, a ring of cenotes is arranged concentrically around the crater of Chicxulub; therefore, their training is attributed to the impact of a meteorite 10 km in diameter, which also caused the extinction of the dinosaurs about 65 million years ago 🐾

The cenotes in the Yucatan area are for the most part connected by a system of aquatic caves, which would have been created during the impact of the meteorite.

When the orifice of a cenote is situated below the surface of a body of water, it appears in the form of a darker spot; then we speak of blue hole or black hole according to the perceived color.

This site was made famous by Jacques-Yves Cousteau who declared it as one of the top ten diving sites in the world. In 1971, he came with his boat, the Calypso, to draw a map of its depths.

I find it very beautiful and mysterious and being a former diver, I would like to go there for a little dive. It must be impressive to dive right into this blue hole. I'm curious to see what lies beneath…

Sky drive is better felling. I like sky drive.

Interesting facts, I saw programs in which people talked about this place. This is a beautiful and at the same time a mysterious place. It attracts attention of both scientists and tourists and divers. There is a big blue hole in one of the most beautiful places on earth.

The Mayas considered these wells as a means of communication with the gods of the infra-world, the chasm representing a mouth. They used them as a reserve of fresh water but also as a place of worship in which offerings or sacrificial victims were thrown.

this kind of information only inflames the interest in learning from many people.
Thank you Hey sorry, i was trying to upload my image as a display picture on profile. Iam Sana here, a Biotechnologist, creative writer, poetess , feminist and a lover of arts and nature so came across your profile as inspired by nature.
i must say iam mesmerized by your eye catching article and sceneries that are so impressive and too pretty to be real. Most importantly full of life , enthusiasm and vigour.

Wow. What a lovely scene! Id love to see that in person one day.

Great blue hole is actually the Earth’s butthole. Go in at your own risk 😷

its really interesting holes i really exited to hearing about this thanks for increasing my informations.

this color is gorgeous. there are almost all the shades of blue. I hope you perform your dream dive.

The Belize Blue Hole is not only the most unique area in the world, but is also the only blue hole that may be seen from space.
i would also like to go there for a dive
but unfortunately i am not

I have not dived in a cenote before. Will place diving in the Great Blue Hole on my bucket list. When I become a Steemit millionaire I’ll make travel & dive arrangements.

There are very interesting is sky driving . Feeling like a bird .

With this type of information @indesta120282, one begins in the stage of evolution and wakes up, the curiosity to learn new things, it looks very interesting.

I never been there and I dream of it. One on my bucket list to visit.

Thanks for this wonderful article. The Great Blue Hole is breathtaking and very impressive. I have never dived in Belize until now, but maybe next year. If you are interested in the dive sites around Bali, please take a quick look at my posts. Follow and Resteem! Sunny greetings

There are a lot of mysterious things in this world. We even won't be able to see all of these in this life. You did a great job. The photos are really attractive.

oh wow amazing facts- cenotes are just fascinating, I would also love to dive in one in Mexico. Thanks for the post- I learnt a lot! :)

Wonderful images you show here :)
Im hoping to provide one day that great value to all Steemians as you do.
Im just travelling the world with my Music :)
Keep up the good work

It's incredible what mother Nature can offer to us, this is amazing for my eyes and when you look at the dimensions it's just mind blowing, how is that even possible to exist?
But like the Great Blue Hole and the "traditions and adventures" around it, there are a lot of places like this in our beautiful planet.

wow just owesome post. the dimensions of the opening on the surface of these cavsties are viriable. enjoy your travel. thanks for the share.

What interesting and informative .....

Congratulations @lndesta120282, this post is the ninth most rewarded post (based on pending payouts) in the last 12 hours written by a Superuser account holder (accounts that hold between 1 and 10 Mega Vests). The total number of posts by Superuser account holders during this period was 1651 and the total pending payments to posts in this category was $13350.10. To see the full list of highest paid posts across all accounts categories, click here.

Oh wow really impressive! Interesting post. <3
Did you saw my drawing of your butterfly photos?
Have a nice day @lndesta120282

That is some fine hole. Awesome to see it taken on from so many different angles.

Beautiful,would love to see it with my own eyes :D

Awesome post. Im actually from Belize, where we have one of these blue holes ... unfortunately i've never been to see it in person.

This is very interesting. I do hope to explore one of these blue holes one day, but not as a sacrificial victim😁

see the sky from the top full of sensations, gazing into the earth with altitude,, really I like it sky drive