The Porticoes from Bologna 漫步博洛尼亞騎樓建築

Here's a trivia about Italy ~ if you go into a gelato shop and see the colourful gelato piled high in the display cabinet, that's there for show and it shouldn't be like that. The best way to freeze gelato is inside the freezer, covered up in an airtight container to keep its taste intact. This is one of the few things my accommodation host in Bologna told me.
如果你到義大利的冰淇淋店，見到七彩繽紛的冰淇淋在冰櫃裏面， 這其實不是正確的儲存 方法。 義大利冰淇淋應該是用密封的盒子放在冰櫃裏，這樣就可以保持冰凍及其美味，否則冰淇淋就會像這樣開始溶掉。這個小知識是我到義大利博洛尼亞旅遊時住所主人告知的。 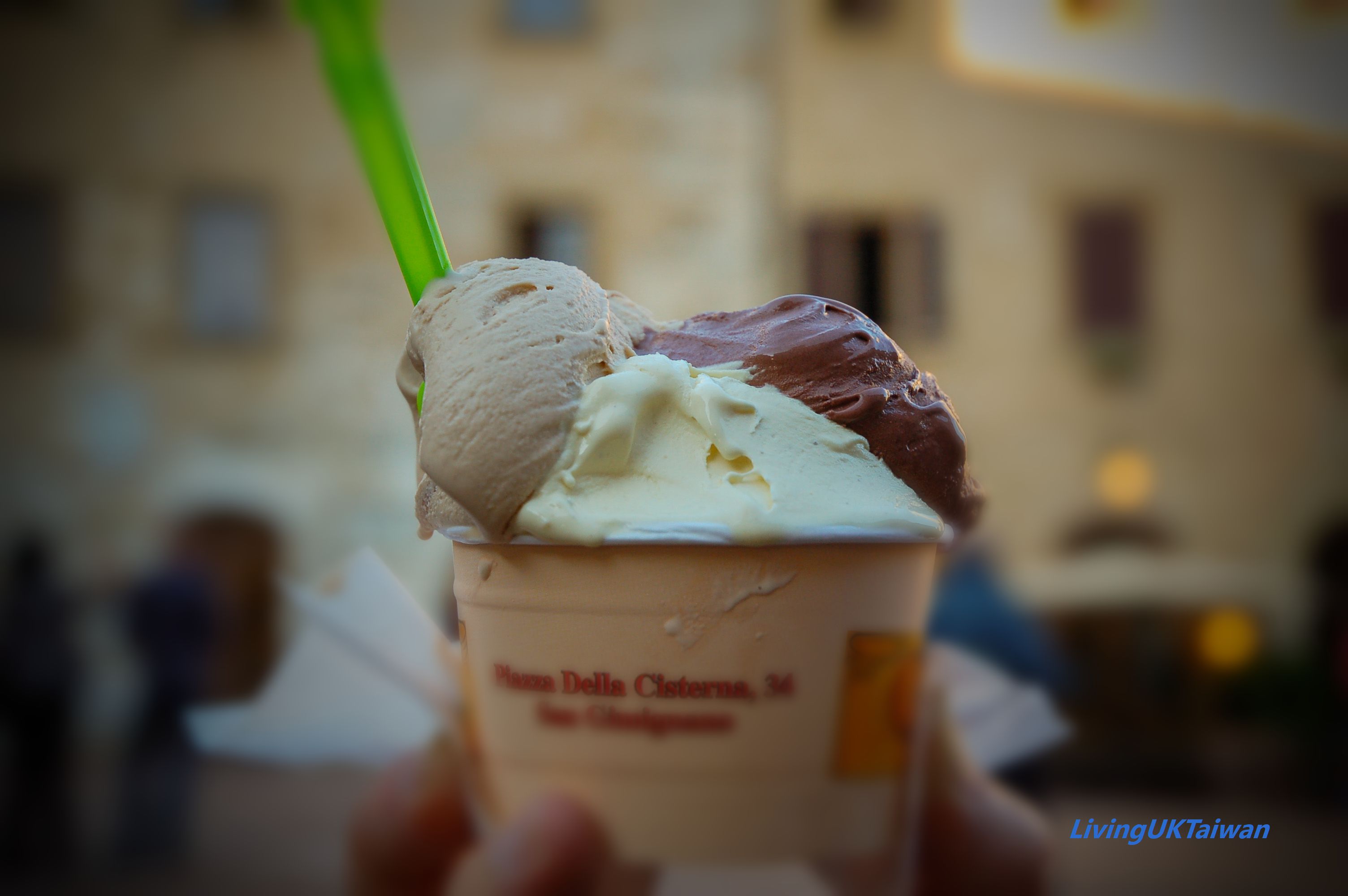 The other thing he told me was that he hardly needs to use an umbrella because Bologna is famous for its Porticoes (archways). In the late Middle ages, people extended their living space on the upper floors of the buildings and used wooden pillars on the ground floor to support these extensions. Gradually these wooden pillars took up so much space on the pavement and the government laid down strict rules to regulate them. For example they said that all porticoes must be at least 7 feet (2.7m) high, that's to allow a man riding his horse to go through, and that these porticoes were to become part of public space. These rules influenced the architecture and development of the Bologna as we know today.
他又說，在博洛尼亞不需要用雨傘，因為博洛尼亞有很多騎樓。 在中世紀，博洛尼亞居民喜歡加建樓上的房子，而這樣就需要在樓下用木柱承托加建房子的重量。 結果地面上的木柱越來越多，有礙美觀，同時又阻礙狹窄的行人道。 於是政府規定所有騎樓底下必須有7尺高，可以讓騎著馬的人經過，另外所有騎樓底下的地方亦會變成公用空間。 這些規劃影響了博洛尼亞的建築風格，變成我們今天見到的博洛尼亞特色。 Having found out about this interesting piece of local information, sure enough when I started to wander around Bologna these porticoes were to be seen everywhere. In Taiwan, where I am living now, there are also many of these archways, but most of the space are occupied by the tenants of the building or parked scooters, and often the ground is at different heights outside each building, making it not a very comfortable walk. Here in Bologna, the porticoes are wide, level and there is no obstruction at all.
知道這個小知識後，我在博洛尼亞街上真的留意到很多很有特色的騎樓。 在台灣也有騎樓，但很多(尤其我家附近)都被佔用或是停滿了機車，而且路面高低不平，時常都要人車爭路，很不好走。但博洛尼亞的騎樓很寬闊，路面平坦完全沒有障礙物，走路很舒服。 The architecture of each portico is an art in itself. From the shape of the ceilings, the decorations, and the pillars they all have their own characteristics. These ones have a round ceiling where the four sides gravitates towards the centre and you end up with four concave arches. I'm not sure the purpose of the rods across the porticoes, they look a bit too thin for support.
博洛尼亞每個騎樓都有自己的特色，從天花板到設計，燈飾以及石柱各有不同風格。 像這些圓頂的騎樓，四邊逐漸朝向中心形成四個小拱形。 騎樓由左至右有多條小鐵支，我不清楚他們的作用，似乎對支撐騎樓的作用不大，應該是另有用途吧。 Some of porticoes have alternate concaves and curves along the top. I think the square decoration on the curved part looks like a ladder that extends down the pillars.
有些騎樓梅花間竹四個小拱形及半圓形的設計。 半圓形那部分還加上正方形的 裝飾。 可以看得出這些騎樓的設計都很有心思絕不馬虎。 There are some other ceilings which are flat and square like this one below. This one is made of wood, and has a flower carved on the top (or bottom depending on how you look at it) .
有些騎樓是平頂，正如這座用木建的。頂部還雕有一朵花。 Likewise this one is also made of wood and is flat. The design is a bit more simple and has beams across the top. It is located next to Bologna's two leaning towers, if you look carefully you can just about see one of the towers on the right. The photo quality of this one is quite bad as I took it with my mobile phone when it was raining and cold so I just quickly took a shot when I was passing through.
另外這座也是平頂，設計較為簡單，表面只有多條木橫樑。它在博洛尼亞兩座著名的斜塔旁，從照片右邊可以隱約看到其中一座斜塔。 拍這照片時正下雨又很冷，我只能用手機趕快拍下，所以照片的質素比較差。 Then you have these square ones. I think they look like waffles, don't you think so? If I remember correctly, both of these were outside the shopping areas which may explain why they look a bit grand compared to the other smaller curve ceiling ones. There are more lights under these porticoes, I think perhaps its for the increase flow of people passing by.
這幾座我覺得有點像比利時的鬆餅。如果沒記錯，這幾座應該是在購物區，所以相比其他細小圓拱形的騎樓較為宏偉。 騎樓吊下來的燈也較多，可能是人流比較旺，需要明亮的照明吧。 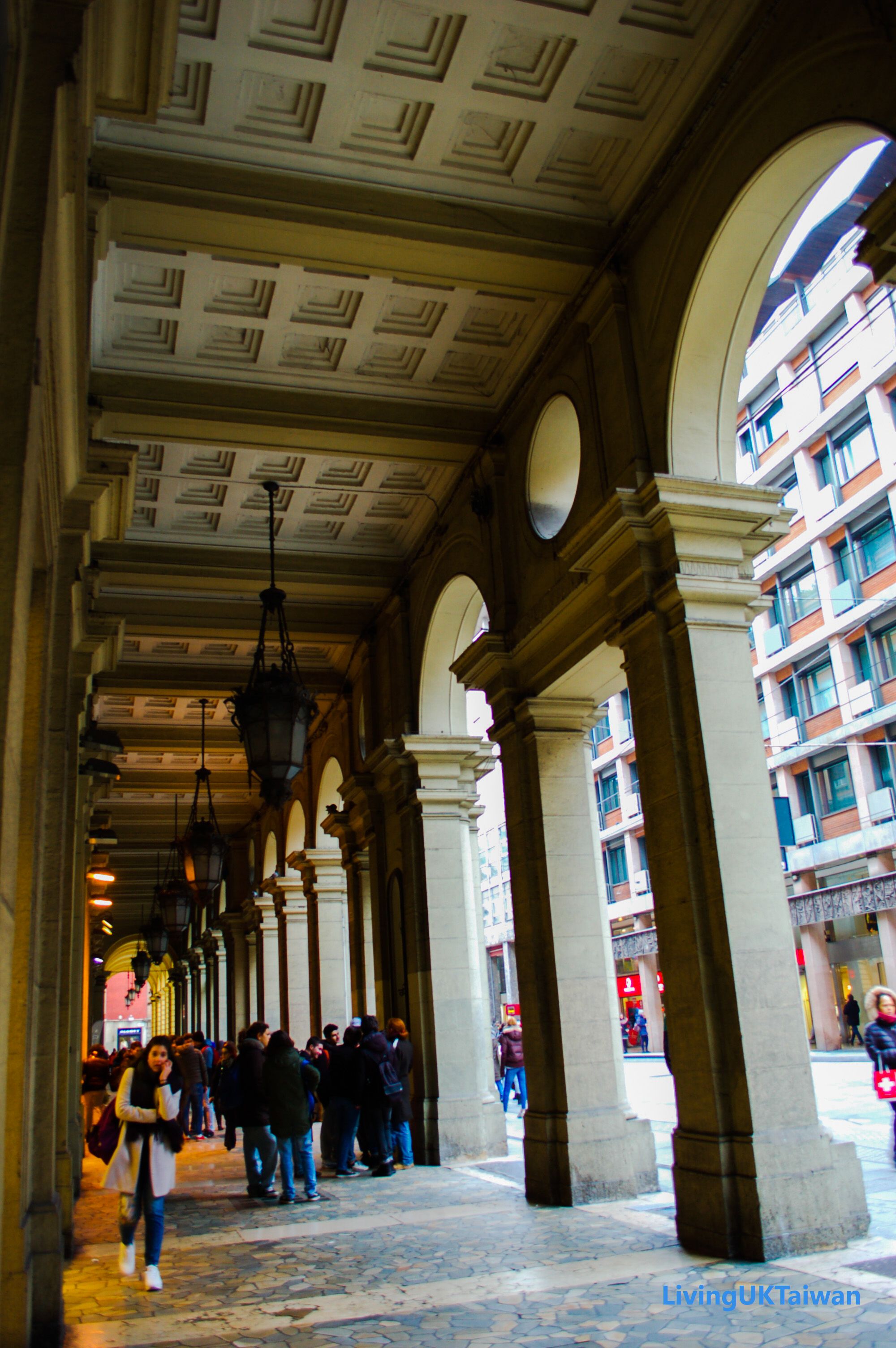 My favourite portico is this one. It is outside a big bank hence you can see that the building is heavily guarded. The portico is a lot higher than the required 7ft, in fact it is the same height as the inside of the bank. I know this as I actually went inside the bank for a few minutes to get some warmth as it was so cold outside. Due to the height of the portico, there are extra lights on the side of the walls. From the beautiful light holders, it is obvious that thought had been given to ensure the light extends a bit further out to the walkway as it is quite wide. I was particularly impressed with the decorations on the pillars which matched that on the outside of the building. The whole decoration of the portico is so elegant that it wouldn't look out of place in any grand house.
我最喜歡就是這座騎樓，在一間很大的銀行外面，大樓守衛森嚴。 這座騎樓高度比規定的7尺還要高，在牆壁上多了一排燈。從這些燈很明顯可以看到建築時是花了很多心思，行人走廊比較寬闊，所以這排燈是向行人走廊伸延出去。 我特別欣賞騎樓處的裝飾，跟建築大樓的牆身很合襯。 整座騎樓的設計很優雅，如果放在任何一間豪華大宅裏都絕不遜色。 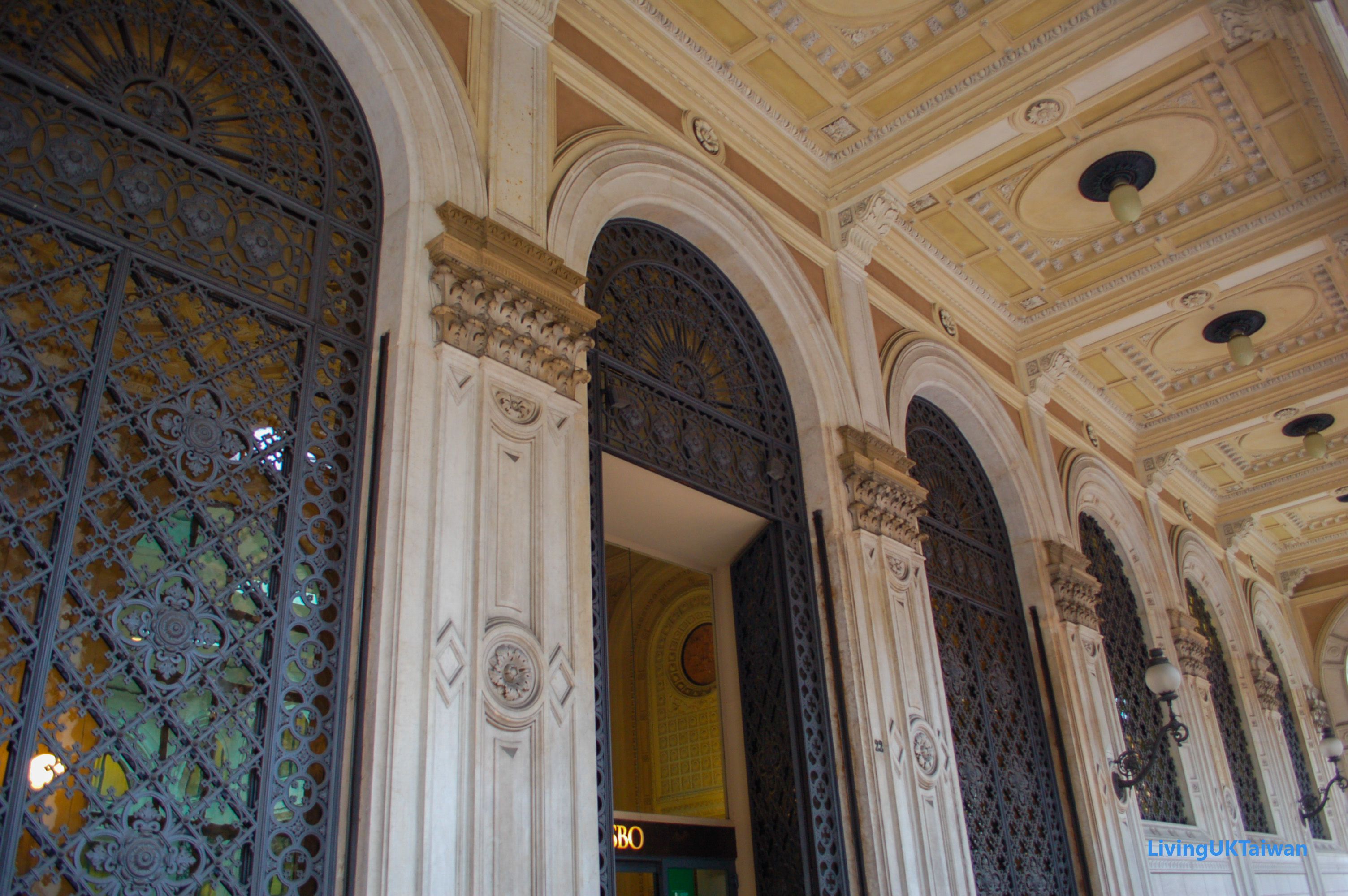 I hope you have enjoyed the walk around Bologna and admiring these beautiful porticoes as much as I did.
我希望你喜歡今天我帶着你，在博洛尼亞漫步欣賞它著名的騎樓建築。

Check out all my travel posts here or visit Steemit Worldmap

Amazing! Did you walk up to the Santuario di Madonna di San Luca?

Porticoes are a real Bologna trademark! They provide a cool alternative to the regular sidewalks as they make for a nice place to walk under. Although, it can get a bit crowded sometimes...

luckily it was low season so it was that crowded, though I did have to quickly take my photos to avoid being a stupid tourist getting in people's way 😯

I see @livinguktaiwan Better to not eat gelato when outside it is cold :)

That's some interesting trivia about gelato and the archways (Porticoes) in Bologna. Sam lived in Italy for 7.5 years and didn't know this - just thought it was the architecture and 'the style' those days.

They are common, but Sam just doesn't take any interest in their design and history. You think one would have some knowledge after living in Rome for 7.5 years. He would think 'it's just another archway' hahaha. Doesn't quite appreciate art and design as you do. Yet, he can talk to you about sports all day any day. Saying that he does like visiting art galleries and historical sites, so he's quite a mixed bag. Thanks again for the post. :)

Interesting. I would have just assumed all those walkways were built with the original buildings.

If my host hadn't mentioned it, I wouldn't have paid that much attention to be honest, sometimes that's the advantage of staying in private accommodation vs hotels

You have a great eye! I love the beautiful angles that you take your pictures from! Ughh...I try to eat healthy, but when you travel and there's gelato.... how can you say no?

Hi @livinguktaiwan! These photos are beautiful! I've been to Italy before, Rome, Venice, Florence and Sicily, but we didn't make it to Bologna. The entire country is so amazing though, isn't it? And the architecture is so detailed and ornate; I just loved it.

Thanks for this post, I really enjoyed it! Cheers :)

Thanks Lynn. The reason we choose Bologna, was one we hadn't been before, and two it was cheaper ;-) but it turned out really well. And you're right the food was amazing, though all we seem to have the same two dishes every meal.