Adventure to Fort Bennet With a Twist

Let's Go Adventuring Into the Past!

Hey guys! I've got another adventure for you today! This time we journey into the past as we head to Fort Bennet, filled with cannons and other remnants of civilizations gone past. Unexpectedly, we ran into a character and saw something quite weird but extremely thrilling! It was truly an experience I would never forget.

The fort was remarkably easy to find as it was near a populated area. The sign had a brief explanation of the history of Fort Bennet itself, so you can really appreciate the site. The entrance overlooked the sea and had a beautiful view!, I just had to stop and take a picture!

As soon as we walked in, I could see the canons in their places as well as the oven mentioned in the picture of the sign to make the "heated shots". Imagine seeing and being near these instruments of war that were used profusely! They were like monuments of the aspirations of powerful men gone by. How many ships were these things used to destroy? How many people used them to do so? These thoughts boggled the mind! Some of the canons in the court yard.

A close up view of one of them, they are quite solid things. After surveying the huge guns, we set off past them towards the edge overlooking the sea and some huge rock formations. There was a large gazebo where you could sit and enjoy the view and lovely sea breeze. While doing so, I heard this weird animal's cry coming from the ocean side. Bewildered, my eyes followed the sound as it pierced the air again. I saw a weird figure moving along and up the rock formation! As my eyes adjusted I saw that it was the figure of a young man. Apparently the weird calls he was doing was a way of communicating with his mates who were also doing the same thing. BUT WHAT THE HELL WERE THEY CLIMBING IT FOR?

To find out, I continued observing this character. As he got to the top, he let out another loud cry, this time it was distinctly higher pitched. My heart almost leapt out of my chest as I saw the man JUMP off the VERY HIGH rock formation! I immediately assumed he had a death wish or something, but not with that smile on his face... 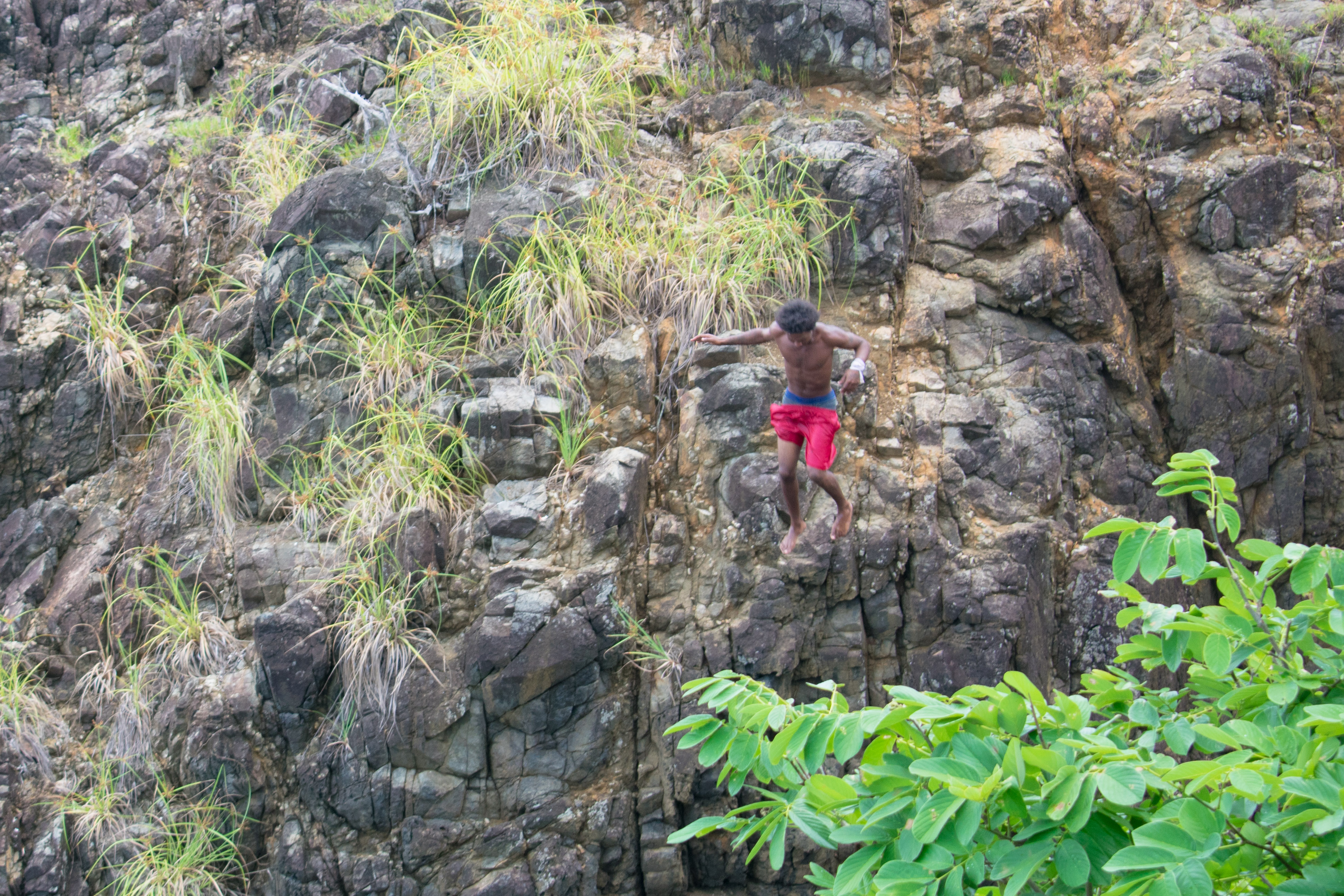 I was relieved to see that he landed safely into the water below. Sharp rocks? Nah, why the hell would he bother with balls as big as his. And you know what? I saw him emerge from the water below to start the climb again. Deep down on the inside something in me to try wanted to try this so badly but I'm pretty sure I might slip and fall off before I even get to the top, much more for precisely jumping off into a small pool filled with sharp rocks. It was so awesome to see though, I don't think I've ever seen a human fall that far in real life. Always time for a selfie!

This was a wonderful experience! I learnt more about the European rule of Tobago and observed a slice of history. The character with a death wish certainly did steal the show. I can't say I know many situations where someone would make and entrance as such, but it was definitely awesome (and inspiring) to witness. Thank you for coming along! I hope you learn't and enjoyed as much as I did. Upvote and comment if you liked, Cheers!

Congratulations @lemniscate! You have completed some achievement on Steemit and have been rewarded with new badge(s) :

It is awesome! Must visit. Thank you for sharing!
If you like to read about travels and circus life please welcome to my friends @annamur

It was my pleasure! Hmm circus life ey? Interesting, i shall check it out.

Congratulations @lemniscate, this post is the second most rewarded post (based on pending payouts) in the last 12 hours written by a Dust account holder (accounts that hold between 0 and 0.01 Mega Vests). The total number of posts by Dust account holders during this period was 2748 and the total pending payments to posts in this category was $726.28. To see the full list of highest paid posts across all accounts categories, click here.

My wife, our two girls 16 and 19 and I enjoyed diving in the fabulous warm waters in Tobago, where we stayed for over 2 weeks. Coming from the cold Scandinavia(Denmark) and used to dive in cold water with drysuits, hood and gloves,

Glad you enjoyed the water! That was certainly something I would not have thought of. Thanks for sharing your experience!