We were feeling a little rough around the edges in the morning. Considering that we sank the first beer before taking the luggage off the bikes yesterday (or in my case, the bag off the pillion seat) I thought we were holding up rather well.

A full cooked breakfast and several mugs of coffee each and we were almost back on track. There were some alpha-male shenanigans beginning to show the night before and the situation was still apparent in the morning. Dave and Bruce may be mates but neither of them had worked out quite who’s top dog and it was beginning to get on my tits. 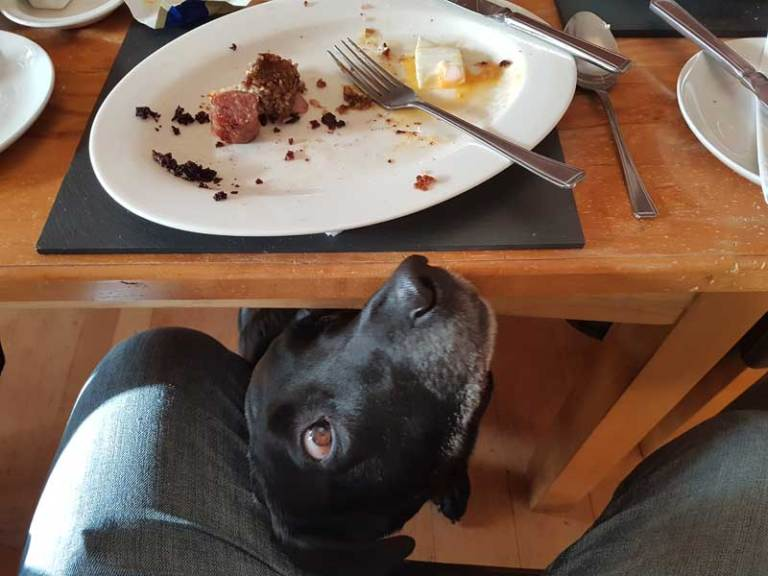 I was about to open my big mouth and shut someone down when two black Labradors got up close and personal with my tackle and my breakfast. It’s impossible to stay irritable with a strange Labrador between your legs begging for the last of your bacon and egg.

That will be why there were signs all over the place saying, “Please don’t feed the Labradors.” They act like they’re starving but their barrel-like curves tell a different story.

I was still a little saddle-sore from the 225 miles we covered the day before but I wasn’t as bad as Dave who was suffering mentally as well as physically after his fall yesterday. I could almost hear him berating himself internally as we geared up and got on the bikes.

Been there, done that and I’ve got the scars to prove it. Best just to move on.

Almost at the top of a mountain pass, on a bad right hand dog leg, Bruce found the day’s gravel patch and his back end squirmed left. Something else must have squirmed too because I heard him squeak from 15 yards away.

Applecross was not on our way to Ullapool and beyond but it was on our agenda, even though the state of the roads would take us a couple of hours out of our way. You see, they had determined last night, after a few beers, that I have never been to Applecross and have therefore never seen the cattle pass. They wouldn’t tell me what it was. They just asked whether I was competent at riding on full steering lock. As it happens, I am.

As it happened, you have to be.

Bealach na Ba, Pass of the Cattle or Applecross Pass boasts the steepest ascent of any road climb in the UK. It is single track and has some wickedly tight hairpin bends. It is not one-way. Going down it on a motorcycle is a bit of a rush.

There’s a sign that says it’s unsuitable for novice drivers or anyone with a spark of sanity.

Looking over the side of the barrier as we eased down it in second gear revealed a vertiginous, 600 metre drop. As we descended, engines howling in protest, we met cars coming up. And Mods. On scooters. And one guy on a pedal cycle, frantic eyes bulging as he heaved what had to be one of his last breaths. He was proper red all over, blood up everywhere. I felt like shouting, “Get off and push, you suicidal bastard! You’re not even half way up!” But we were past in a flash.

It was a little surreal. And then there was the little white van with its back end perched on a rock, blocking one of the few passing spots because it literally met a car coming the other way. The German skin-head who had been driving it looked more than a little fed up and I wondered what the traffic was going to be like in half an hour when it was queued up and down the mountain because of the altercation. We don’t hang about to find out.

We squeezed through a gap in the way that cars can’t and vanished into the wilds.

This part of Scotland is home to some of the shittiest single track roads in the whole of the UK and we worked our way along most of them. When the road finally opened up, we took it as an opportunity to let all that frustrated horsepower go for a gallop.

We’re not talking four lane dual carriageways here. We were getting excited about one lane north and another one south. Mike, on the 1200 Harley, decided that his bike was a ubiquitous circumventer and merrily overtook everything regardless of oncoming traffic, blind bends and summits, he ignored them all and just kept his momentum up. This made him one of the fastest of us all and I was a little in awe of his seemingly invulnerable progress but not so much that I attempted to emulate it.

“I have never in my entire life seen a Harley driven like that,” I pointed out at lunch. “You make that bike look competent.” He took this as a compliment and explained his technique.

Get it to 70mph and keep it there, no matter what.

I wanted some of whatever he was wearing that kept the oncoming traffic from driving over the top of him.

Riding in convoy takes a little getting used to. We staggered ourselves so that we could keep a wee bit closer, making the overtaking as slick as possible but there’s always a sticking point. I found it when Bruce and Dave squeezed around a camper van just before a corner and left me with no line of sight to follow them.

It was a good five minutes before I got past the thing and the pair of them had fucked off. It’s surprising just how far away a motorcycle can get in five minutes and it’s even more surprising how fucking long it takes to make that distance up even when you’re giving it some.

Finally, the traffic thinned, then disappeared and I snicked up into fifth and hit warp factor two. I have a naked bike, so there’s no fairing to take the brunt of the wind, just me and like most big Bandits, I run a pair of Renthal motocross bars. At cough quicker speeds, this means that I basically act as a fat fucking parachute, hanging on for grim death with the throttle nailed to the stop while my helmet desperately tries to climb off the back of my head. There’s a reason that some bikers have forearms like Popeye and 19 inch necks and I was living it.

It was at this point, just as I hurtled past a coach as if it was parked, that I discovered that I was not the sole occupant of my helmet.

Clearly distressed by the violent shaking movements and requiring a more stable environment, a large spider slowly descended on a length of self spun silk from the slit that my integral sunglasses flip up into.

I knew it was self spun because it was so fucking close I could see its goddamn spinnerets going like the clappers. 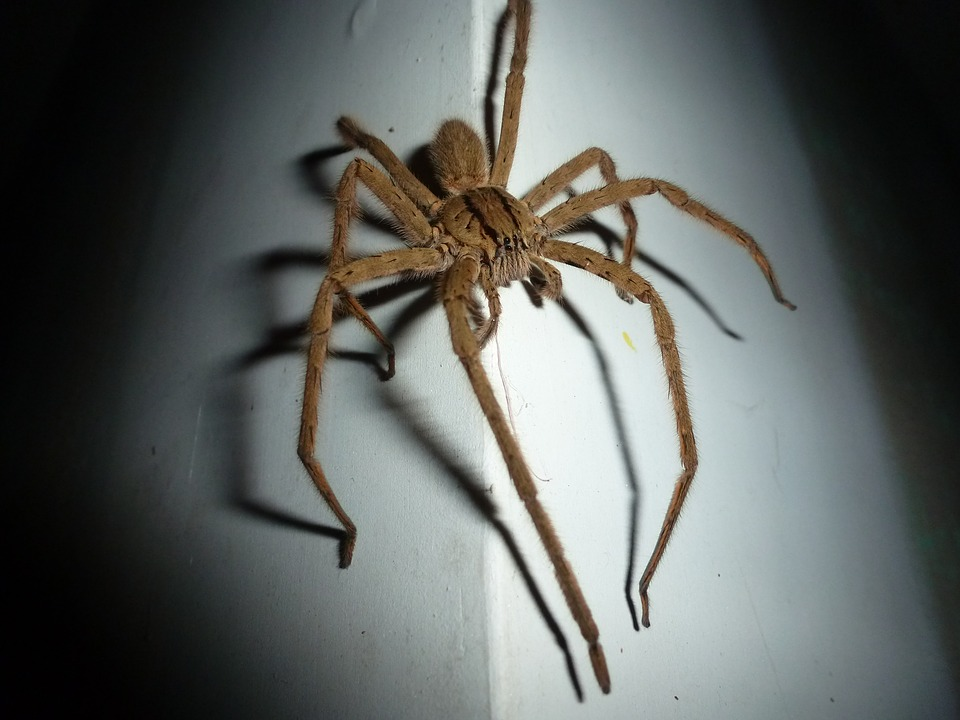 Now, logically, I knew that it was just a common or garden wolf spider and I have no fear of them, in fact, I once called Bruce to come round and see a particularly large one that turned up in our hall in Newton Mearns. It was so big that even his Rottweiller backed off, licking its lips nervously.

But this thing was a different calibre. There’s not a lot of spare space in a motorcycle helmet and it was taking ALL of it.

Deep down inside me, some million year old instinct kicked in and I slammed the anchors on in an effort to increase its distance from me.

Clearly, that wasn’t going to work, there was a visor in the way and it just bounced right back. Braking, with my right hand taking all my not inconsiderable weight, I flipped the visor up with my left, immediately letting in wind with a speed still in the order of three digits.

I let out a whimper and flicked my head to the right, allowing the wind to take the hairy little bastard on a journey that even the strongest silk could not postpone.

As I turned back around, enjoying some (very) brief relief, I spotted the cattle grid that I was heading for at Mach II.
I came off the brakes, onto the throttle and managed to scream, “Fu—“ then the grid was gone. Not even a Prrrt! I’m not convinced I wasn’t airborne at the time.

So much for the open road. Just like that, we were back to single track for the rest of the ride. No warning at all. Nada. Zilch. There are plenty when you start to get into the Highlands but once you’re there, they figure you’ve worked it out for yourself.

I had given up smoking five weeks ago almost to the day. Just as well I didn’t have any with me because I could have done in a pack of Marlboro reds by the side of the road.

We stopped in Ullapool for some scran and then began the weary journey across the peat moors and boulder farms to our resting place for the night.

Some notes:
1. All images are mine or free from pixabay.com unless otherwise credited.
2. I don’t let the truth get in the way of a good story. You’re probably reading a work of fiction. In which case any names, characters, businesses, places, events and incidents are either the products of the author’s imagination or used in a fictitious manner. Any resemblance to actual persons, living or dead, or actual events is purely coincidental. Honest.
3. Even if there was the remotest sliver of truth in anything you read here, which is unlikely in the extreme, I will have changed some or all names and identifying details to protect the privacy of individuals.
4. For fuck’s sake don’t try this at home. I can’t believe I even have to tell you that.

Dang. Who would have thought riding a motorcycle would be so exciting, treacherous, and scary all at the same time? I'm not sure you're going to survive this trip.

This was a fun read, as always.

Your writing is such a pleasure to read, @johnkingwriter. Are you sure you want to write fiction? You would do bloody well as an essayist!

The descriptions in this post had me in a sweat. And I’ve nearly wreaked a car when a spider dropped into view in front of my face. I can’t imagine what the experience must have been like on a bike. Glad you sprouted wings like Chitty Chitty Bang Bang just in time to fly over the cattle guard!