In our previous post we roamed around Florence and got to see the amazing Duomo, the most recognizable building in this city. Beautiful as it is, it would be unfair to single it out as there are many art and architectural marvels adorning the streets of this Tuscan gem. 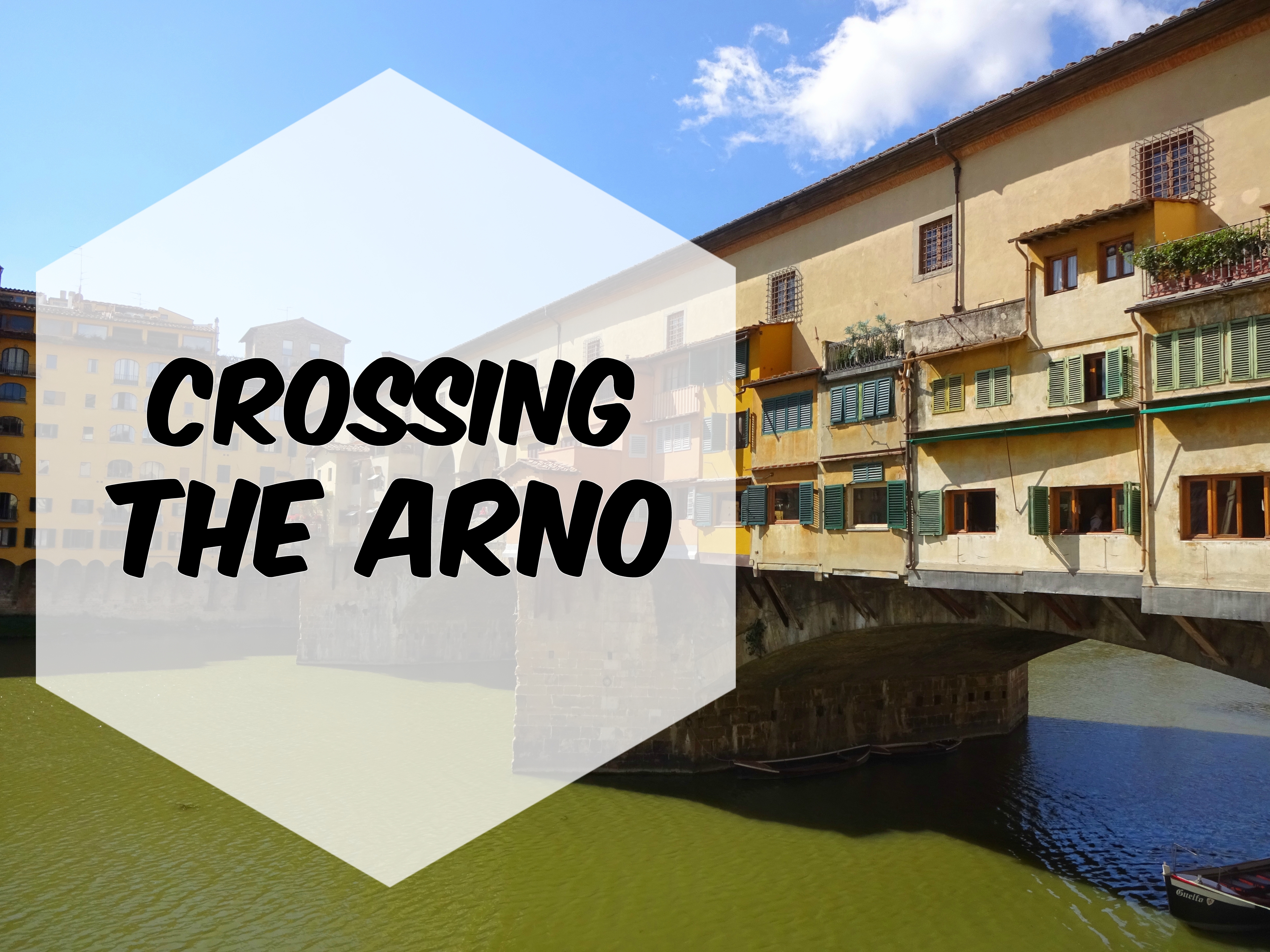 Continuing from Orsanmichele church we soon reached Piazza della Signoria, a beautiful and spacious square draped by a tall medieval town hall, called Palazzo Vecchio (Old Palace). Changing its name many times throughout history, it got its most recent one by the fact that the famous royal family Medici moved their residence from there to Palazzo Pitti, thus making it the old(er) palace. 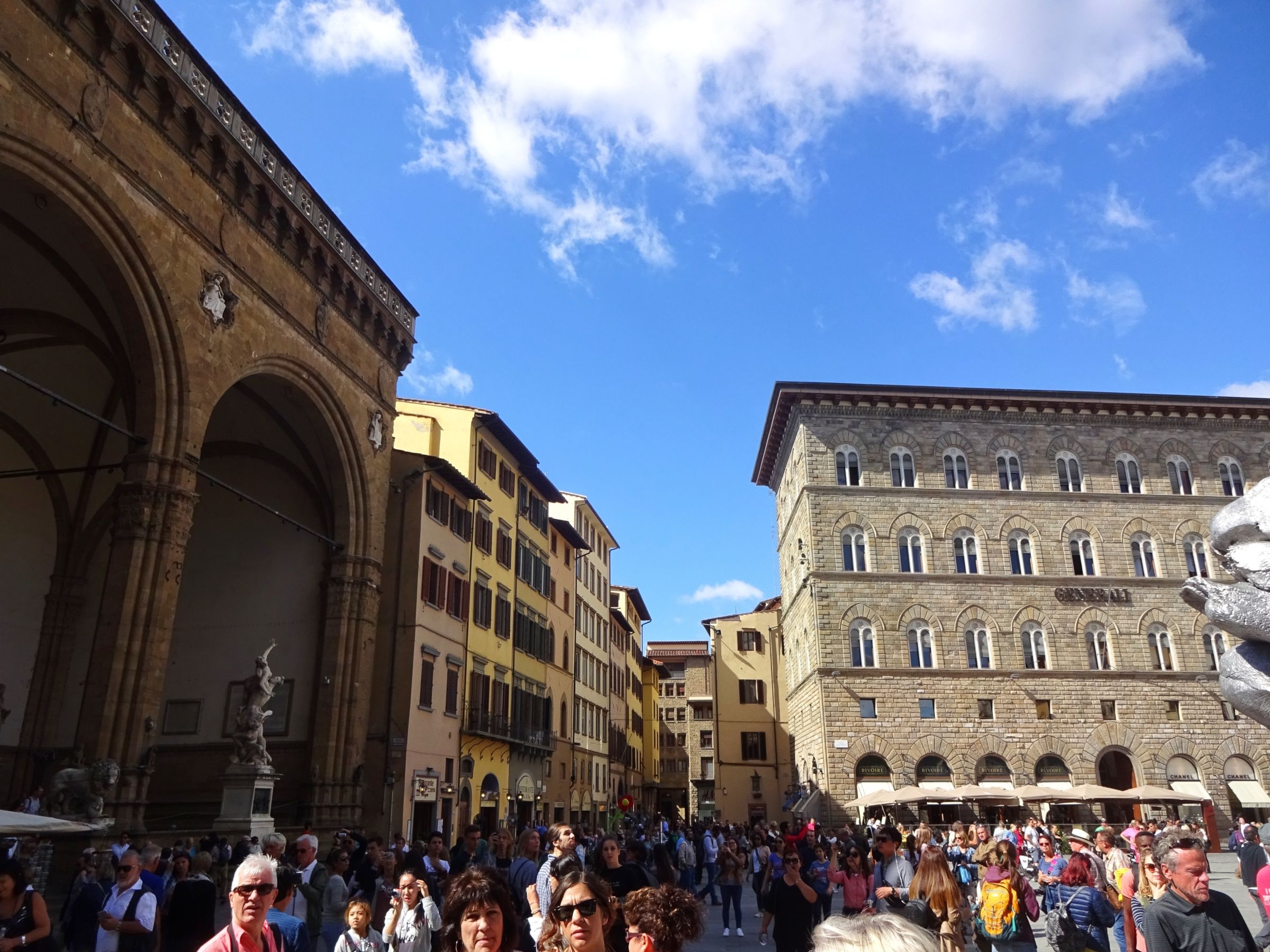 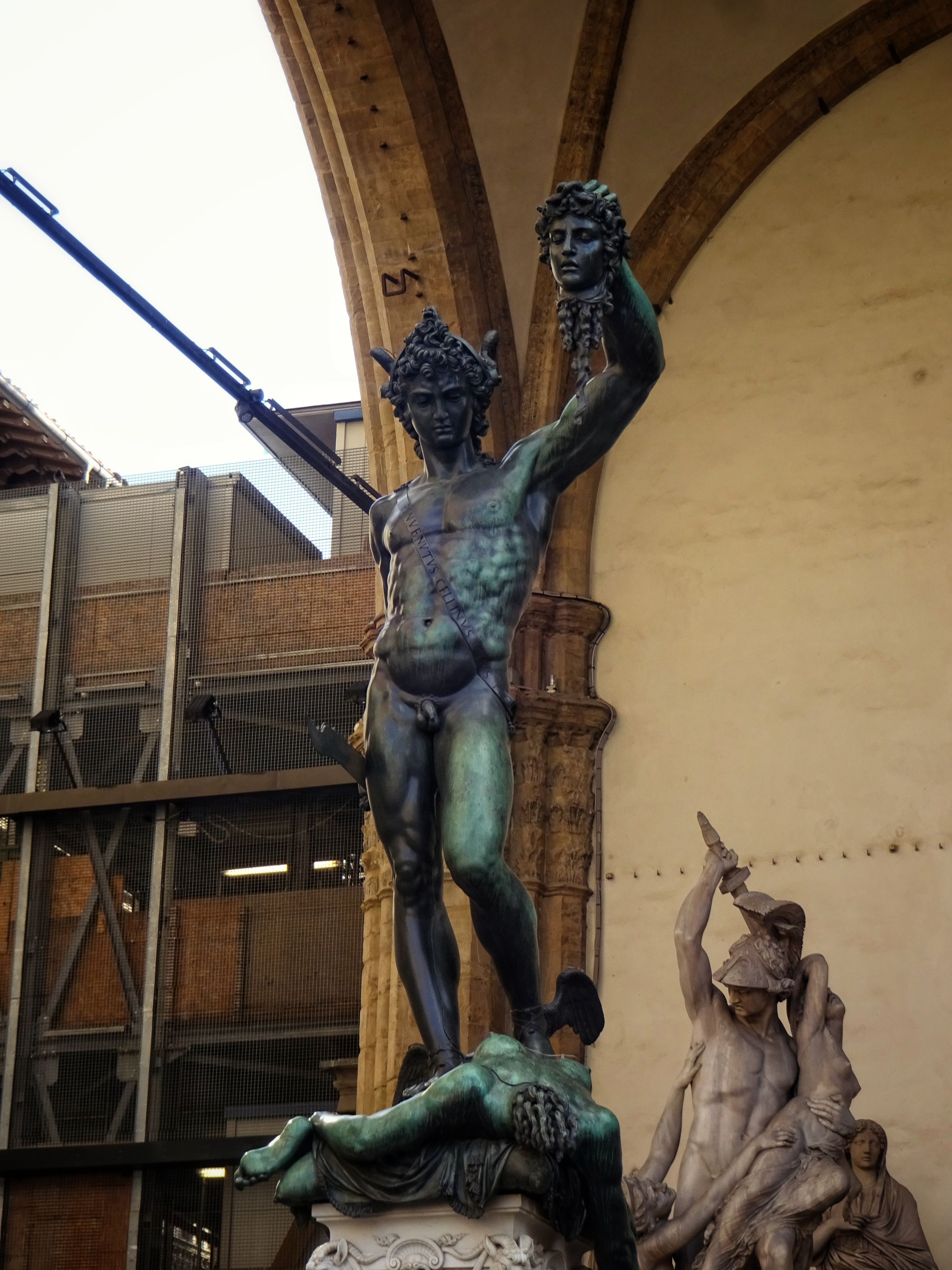 Guarding the palace entrance was a statue and if you have an eye for renaissance art it may look familiar to you. If you had guessed the statue was David by Michelangelo, you’d have been right! Well, almost... This is actually a replica and the original is kept in Galleria dell'Accademia. After standing tall in front of Palazzo Vecchio for more than three centuries, in 1873 it was decided that the original David is better off preserved and protected in a museum.

From Palazzo Vecchio we made our way towards the Arno river and in the distance we could almost have seen it. However, our attention was grabbed by a long corridor of Uffizi Gallery filled with many statues of famous Tuscan people such as Leonardo da Vinci, Dante, Petrarch, Machiavelli, Michelangelo, Galilei and many other brilliant minds from the past. Only then did we truly understand how important Florence was during that time! We just went over from one statue to the other and said to each other: “I know this guy, didn’t realize he lived in Florence, too!?” 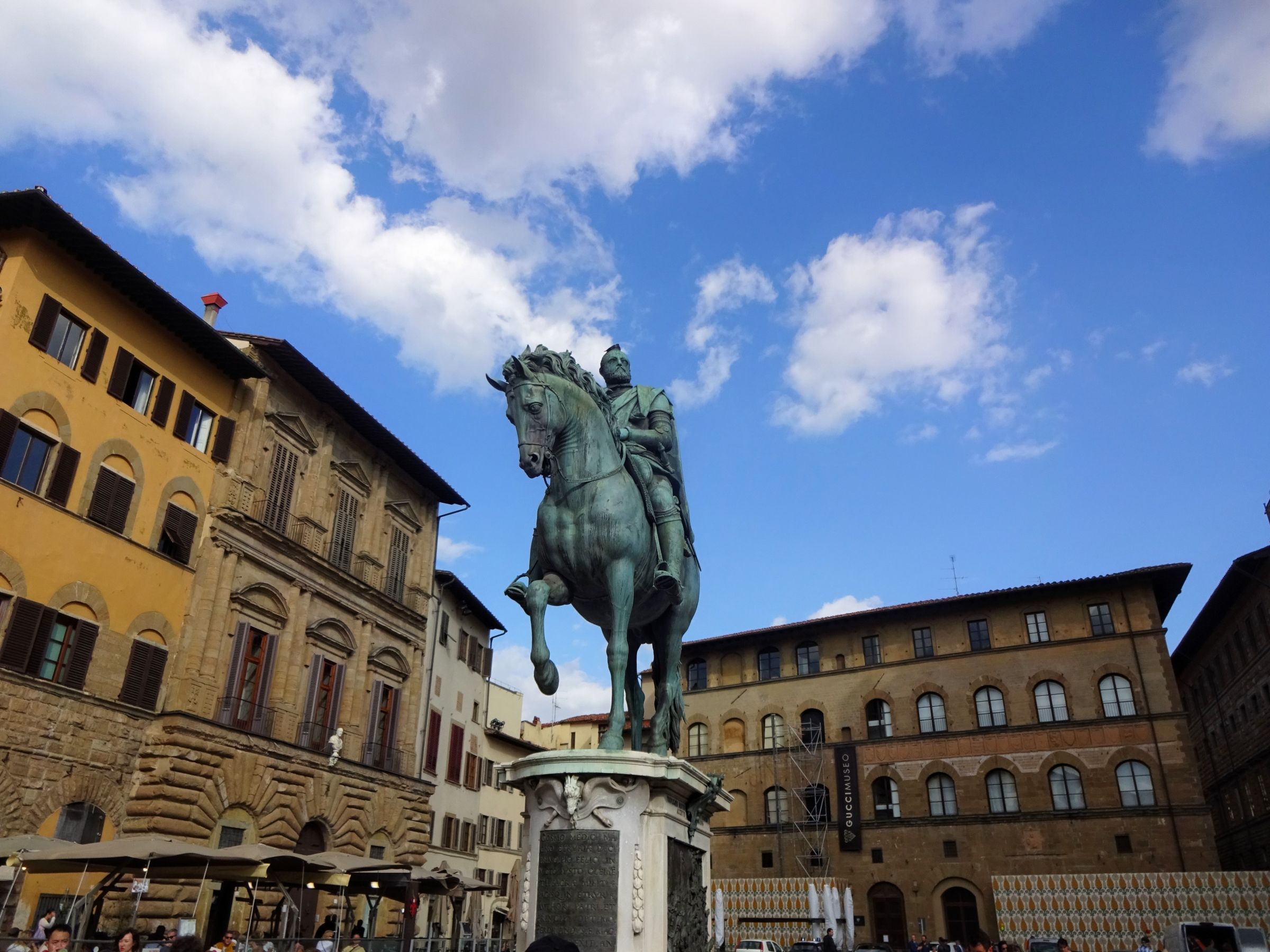 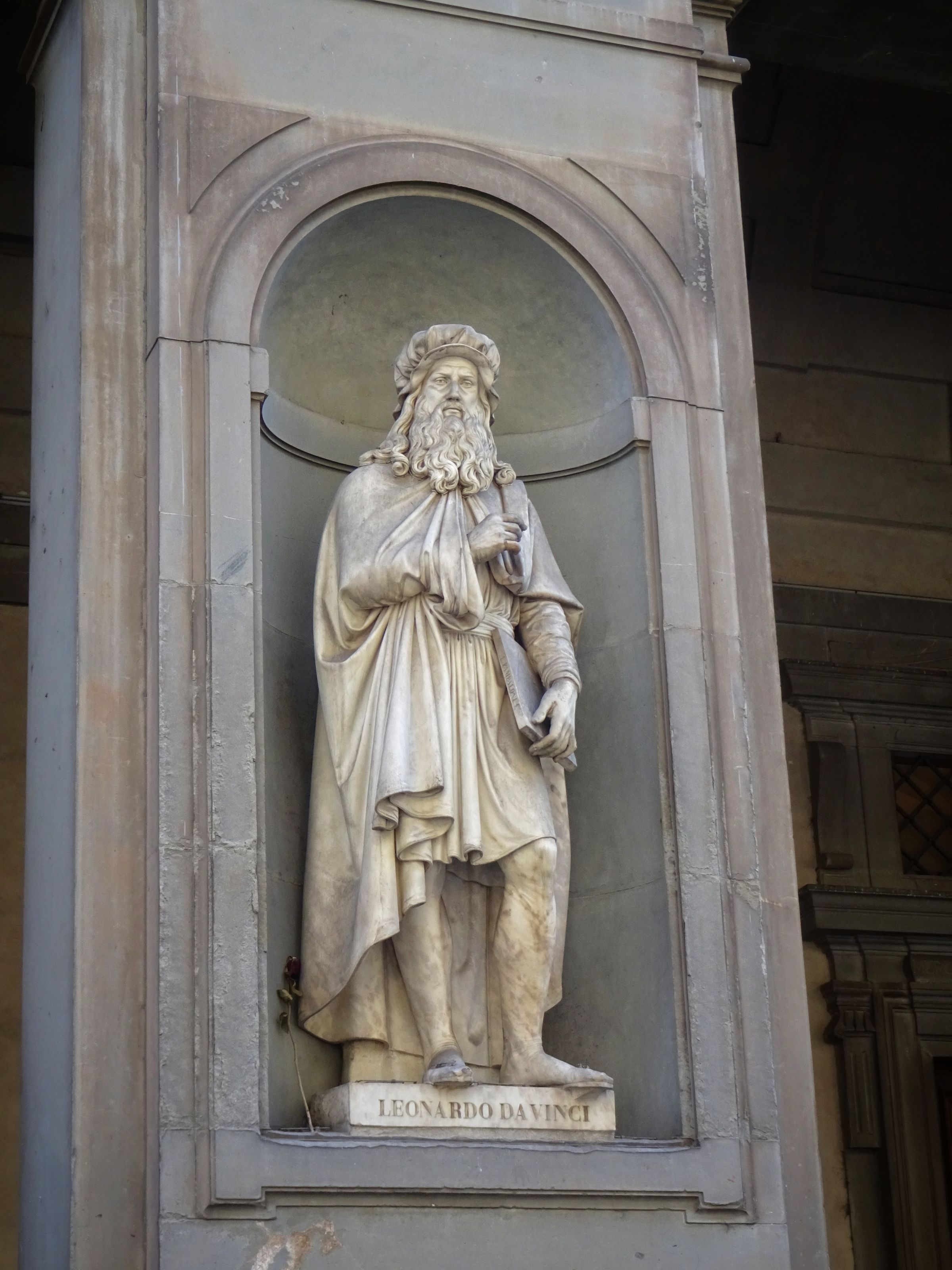 When we were finally done with our statue-gazing, we made our way to the river. As soon as we got there, another famous Florentine landmark popped right into our view. Ponte Vecchio! Surely one of the most famous bridges in Europe. And most peculiar, on top of that! Wouldn't you agree? It was quite a challenge to battle other visitors for a place at the edge of the narrow sidewalk to take a photo of the bridge. But we were patient and when we got to the railing we almost forgot about the camera and just stared at this curious piece of architecture. 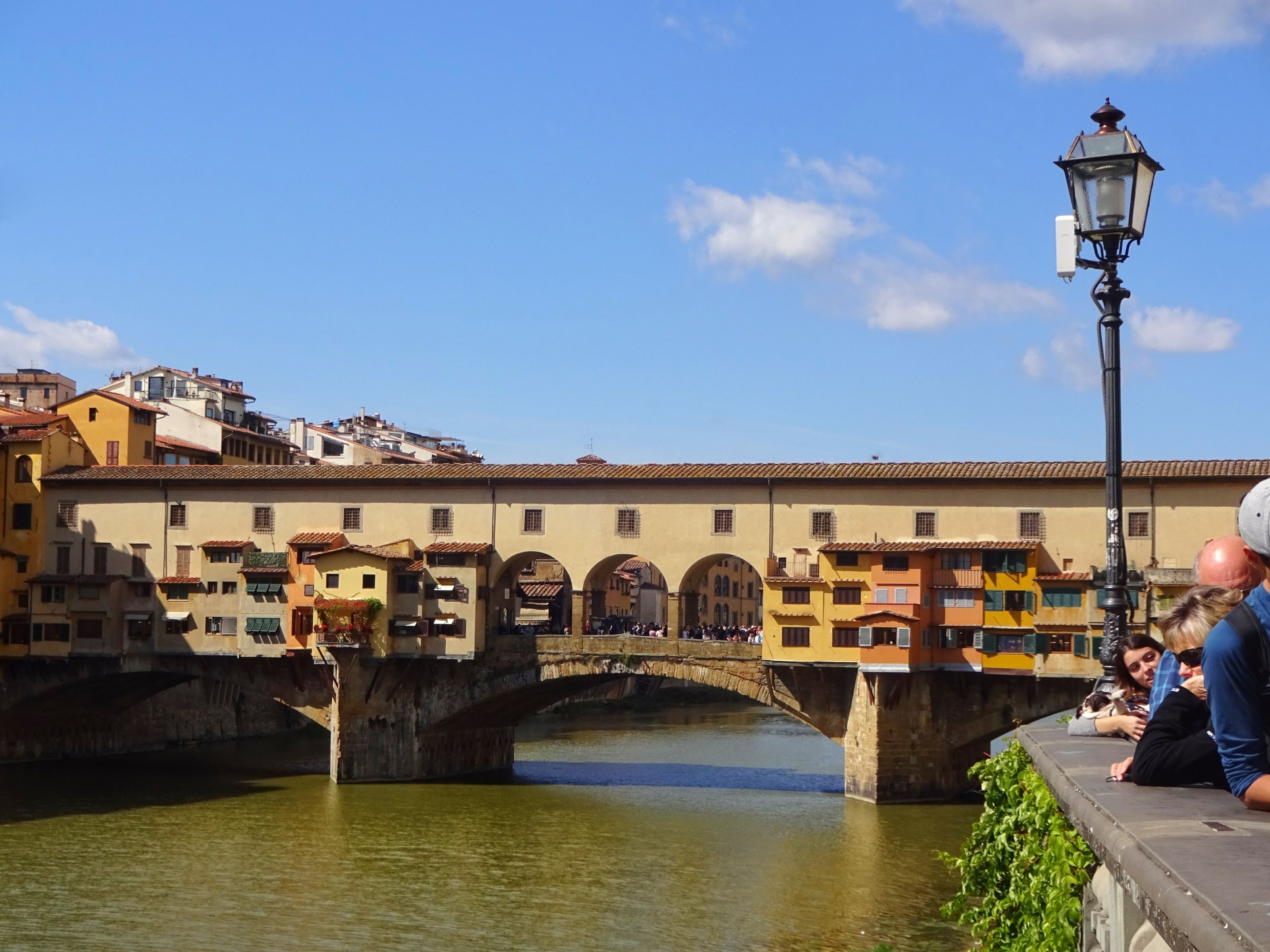 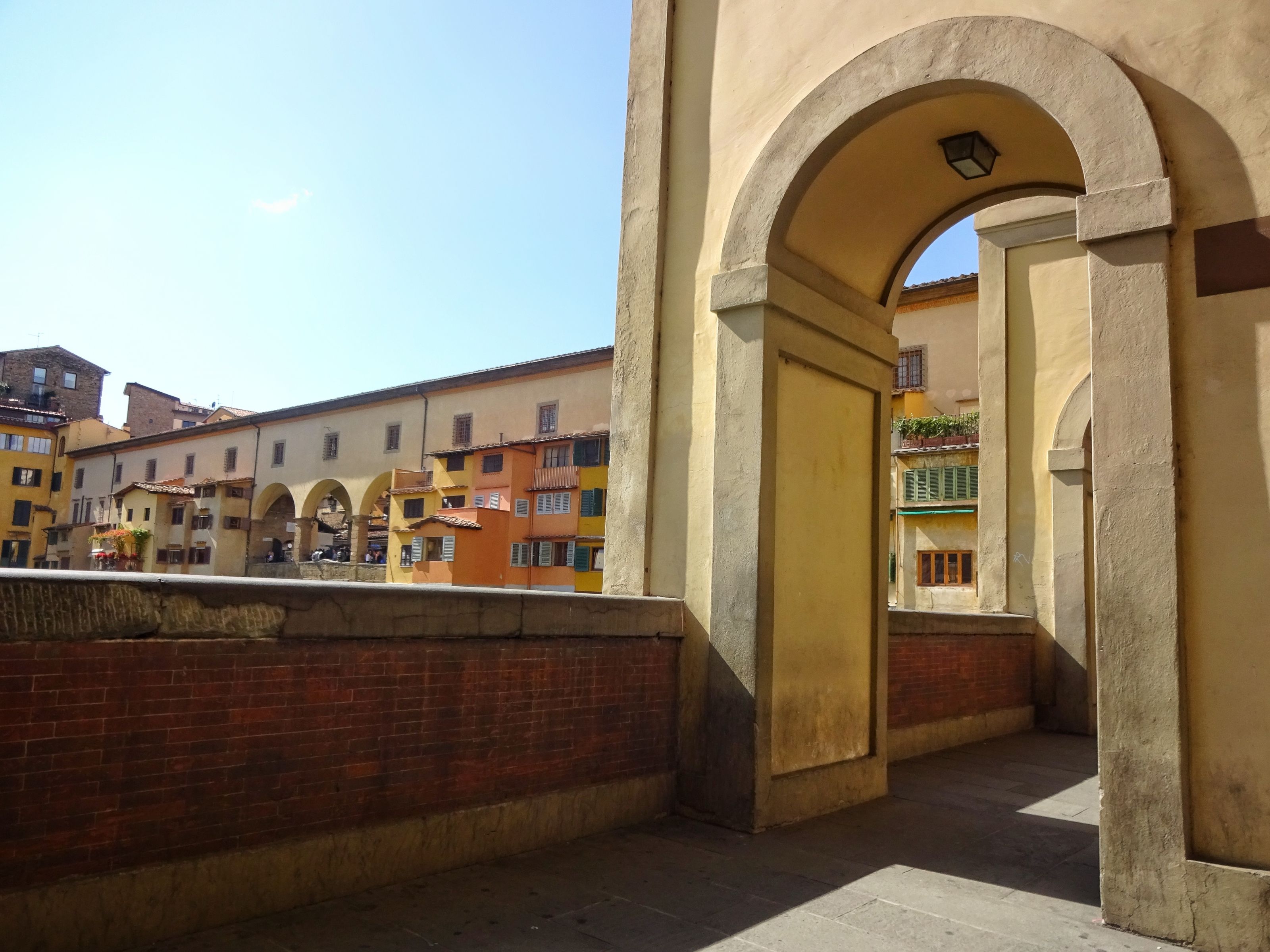 The buildings sitting on the bridge are shops and believe it or not, it was a bit more common to have shops along a bridge back in the day. Since bridges were very expensive, city authorities raised money for construction by allowing funders to use the shops to sell their goods (essentially renting them in advance). The premises were originally occupied by butchers but were soon replaced by jewelers and gold traders who were a bit more refined than the former. 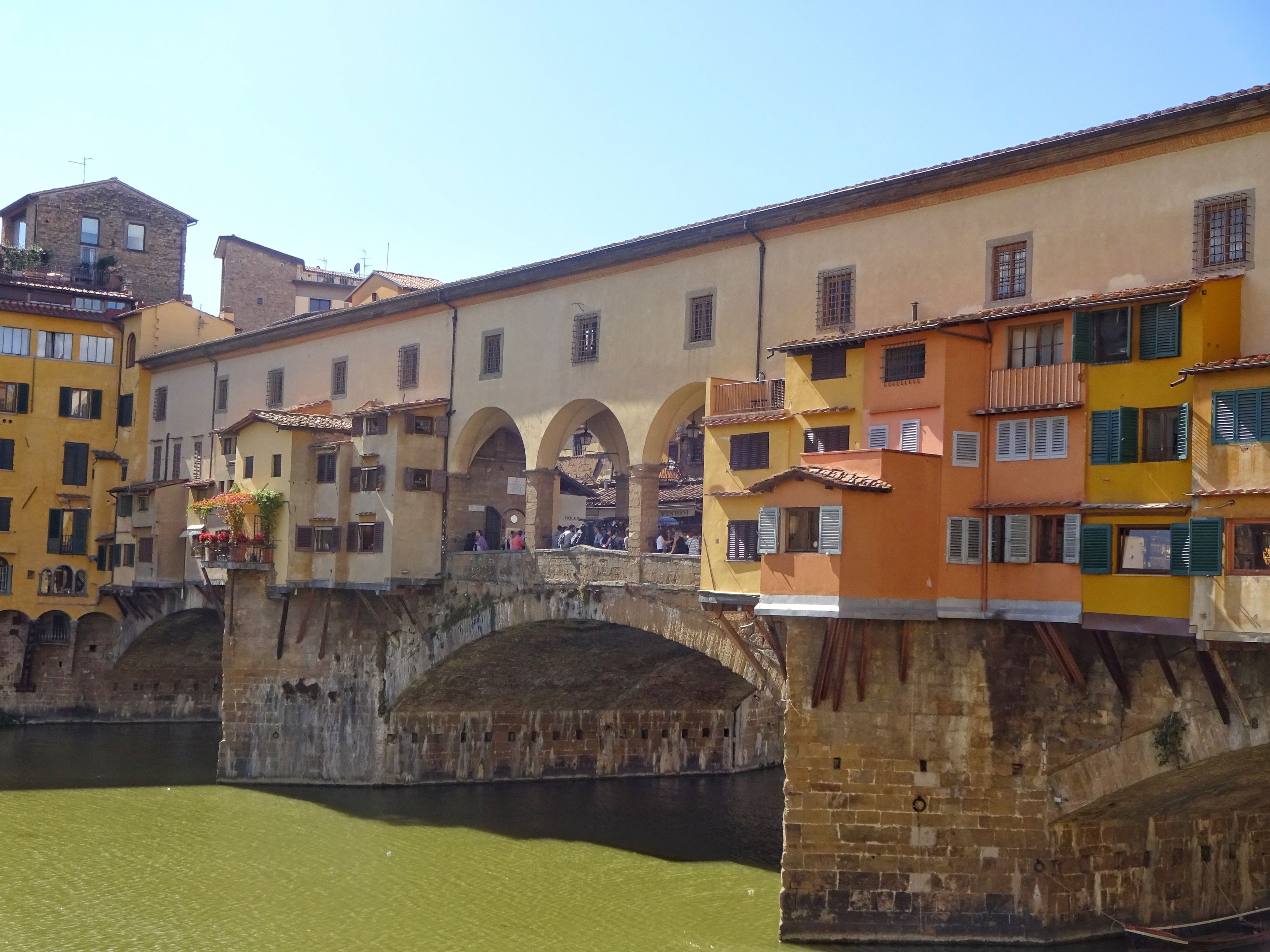 Crossing the bridge caused us to feel strange as we didn’t really have an impression of going over the river. Instead it felt like walking along a regular street seeing all the jewelry and souvenir shops. Luckily, at the middle of the bridge there was an opening that provided some nice views of Arno and the surrounding houses. A nice place to catch some break! 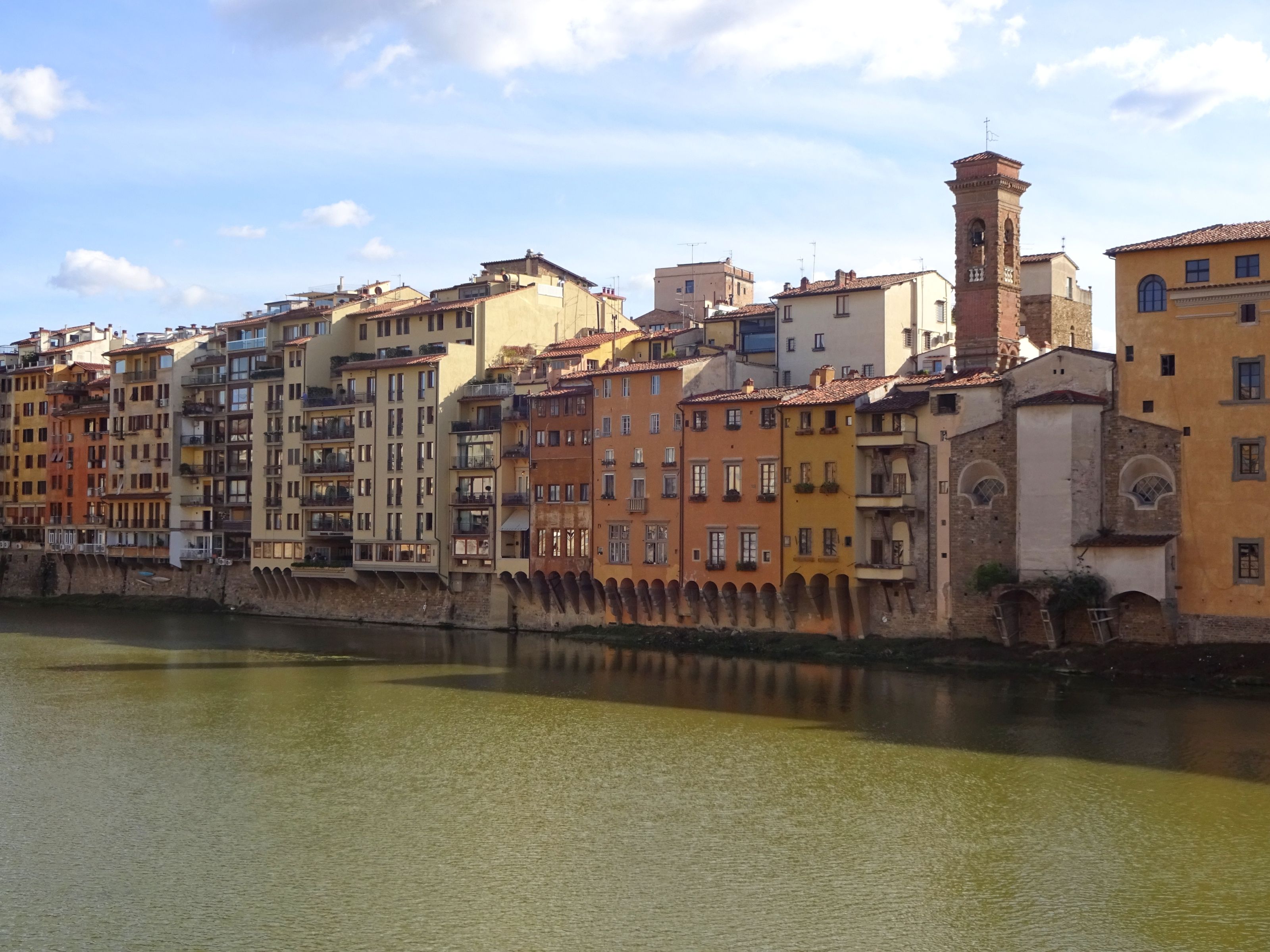 As we got a bit tired of all the walking we decided to get some rest and have lunch. We opted for pizza, but letting a meal go by without trying something new was not our thing. It was a perfect moment to try something truly Florentine and there’s an aperitif locals are very proud of since it originated in this city - Negroni. This cocktail is a mix of gin, vermouth and campari, served with a slice of orange. Although it was bitter and not as tasty as cocktails usually are (in our opinion), it did open our appetite so that when pizza arrived, we ate it in an instant!

After lunch, we continued to wander around, getting lost in the streets. Really, the best thing you can do in Italian towns is to just slowly walk the alleys and enjoy the vibe of Italy. And do appreciate your time there, you’ll want to come back as soon as you leave! 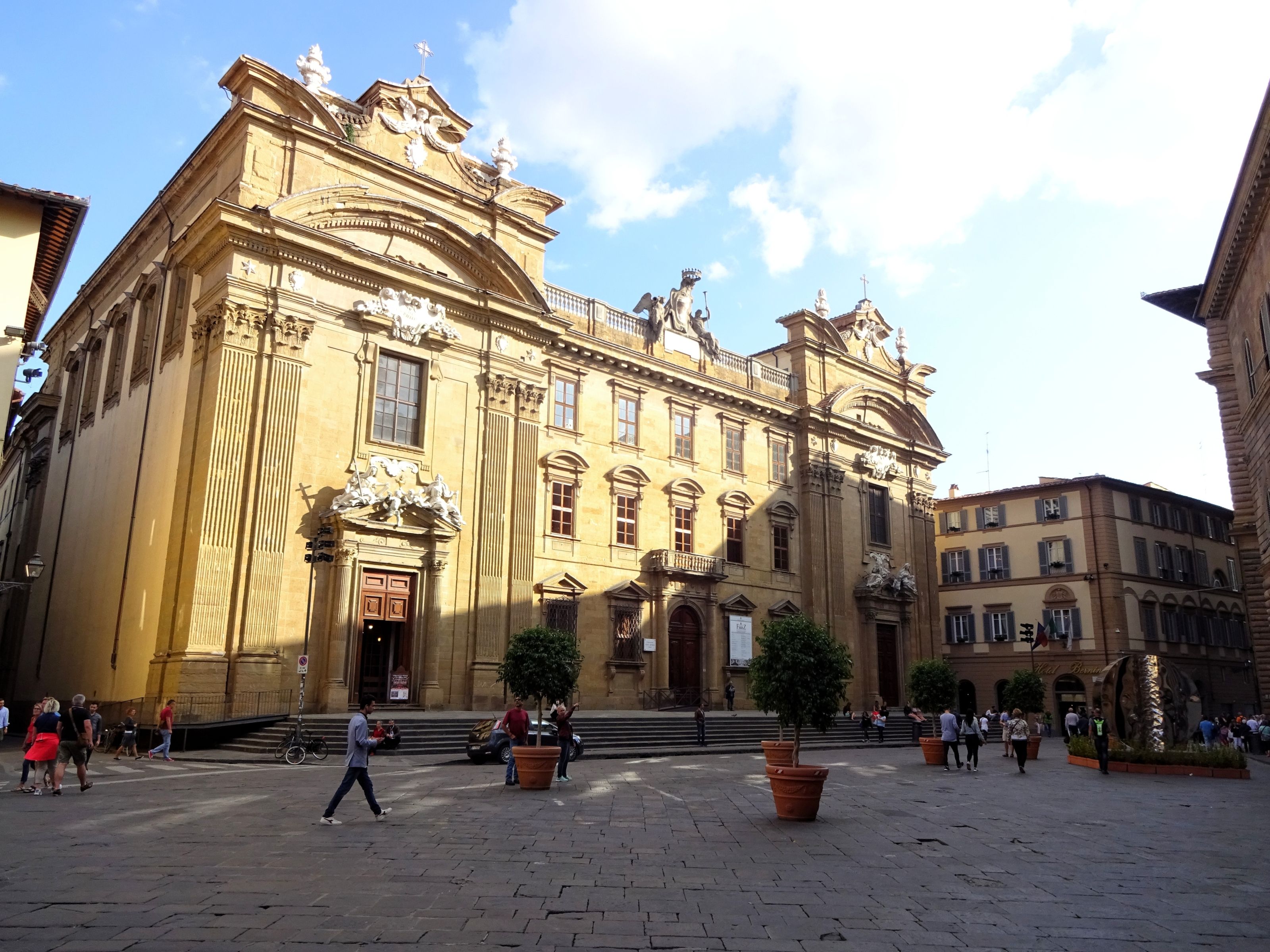 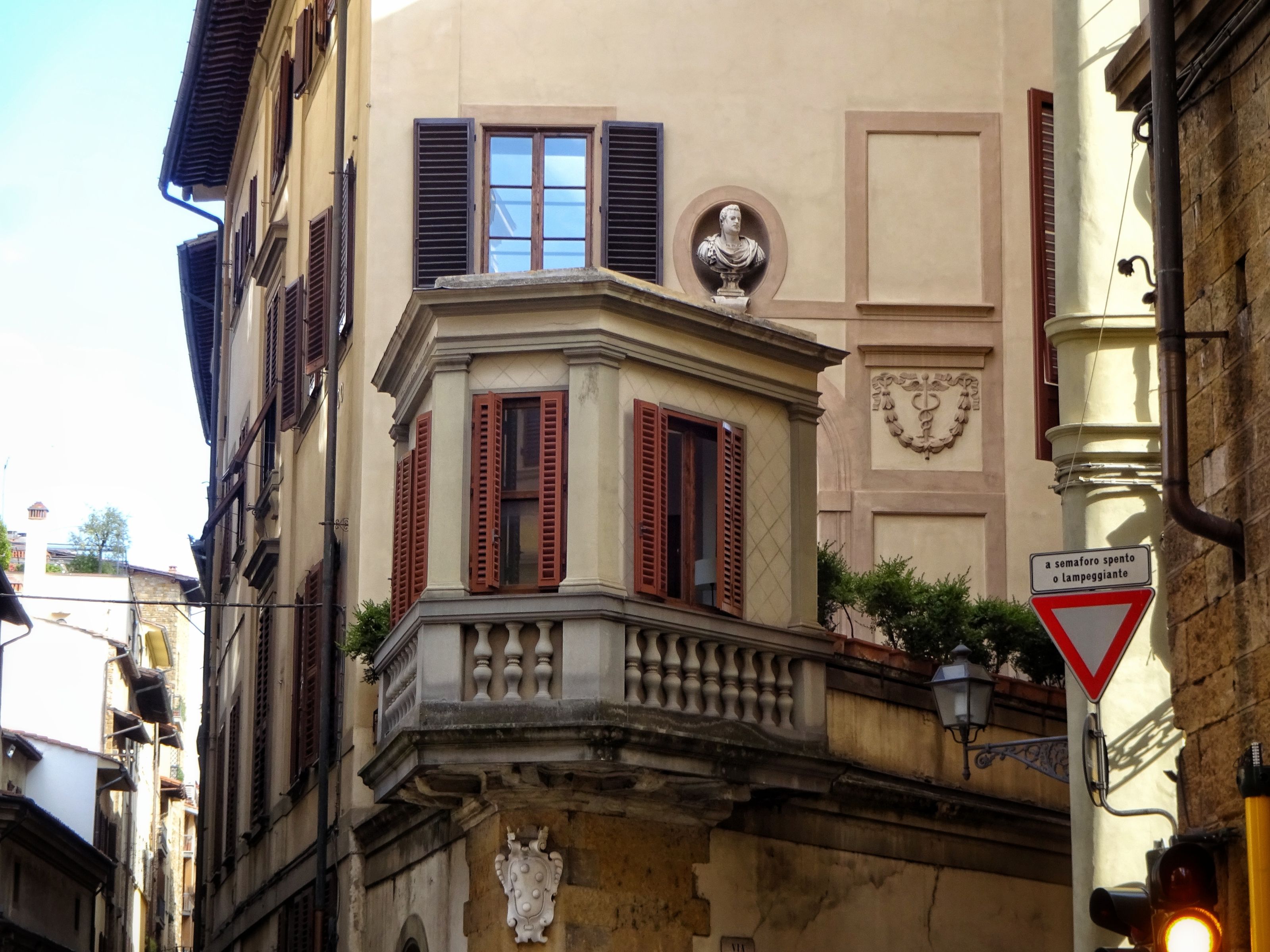 Beautiful places with a lot of wonderful architecture and sculptures! I especially like the river view and the buildings along the river! ;)

Thanks! :) Yeah, the area around the river is absolutely astonishing!

Thanks :) It really is a wonderful place!

@jny.untraveled amazing post! I am totally in love with Florence, been there twice! I am also a traveler so I will definitely be following you! Have a wonderful day! Keep traveling!

Thank you! We can easily see ourselves coming back to Florence in the future :) And your posts are great, too! Looking forward to reading more of them.

Yes, Italy is such a beautiful place. I actually didn't really have a chance to do much of road tripping there, but I paid a lot of attention on visiting Rome and other big and rich in culture and ancient history cities. Italy is like the best place for this - after all Romans were once ruling the whole world, so it's a piece of education everyone should experience in my opinion.

Yeah, totally agree with you. It's amazing how still after so many centuries we get to see the clues of how life used to be in ancient Rome.

Good photos, I am a photographer, it passes for my blog and sees my content, I hope that it should be of your taste, you have my vote :D greetings

Congratulations @jny.untraveled, this post is the forth most rewarded post (based on pending payouts) in the last 12 hours written by a User account holder (accounts that hold between 0.1 and 1.0 Mega Vests). The total number of posts by User account holders during this period was 2286 and the total pending payments to posts in this category was $1991.28. To see the full list of highest paid posts across all accounts categories, click here.

Hi)
I'm community manager from TravelChain company and our team really liked your profile. The content you make is very interesting and referred to the main point of our company.
We would like to offer you to take part in our Bounty campaign and help us with promoting. If you will be interested, contact me via email [email protected] and I will send to you links with some information)

Congratulations @jny.untraveled! You have completed some achievement on Steemit and have been rewarded with new badge(s) :