In our previous two posts we strolled through beautiful San Gimignano which was our first stop on our drive through Tuscany. But if you’ve ever been served those surreal photos of Tuscan countryside, then you must’ve at least felt an itch to go there. We did, and so we decided to do our research and find out which way to go and which road to take to see that amazing scenery.

Turns out that what we were looking for is all located in an area called Val d’Orcia, which is (unsurprisingly) listed as UNESCO World Heritage Site. Since we were already traveling the Italy by car, we told ourselves: Why not take the road through this valley? We took the motorway from San Gimignano, bypassing Siena and entering Strada Regionale 2 (road SR2). 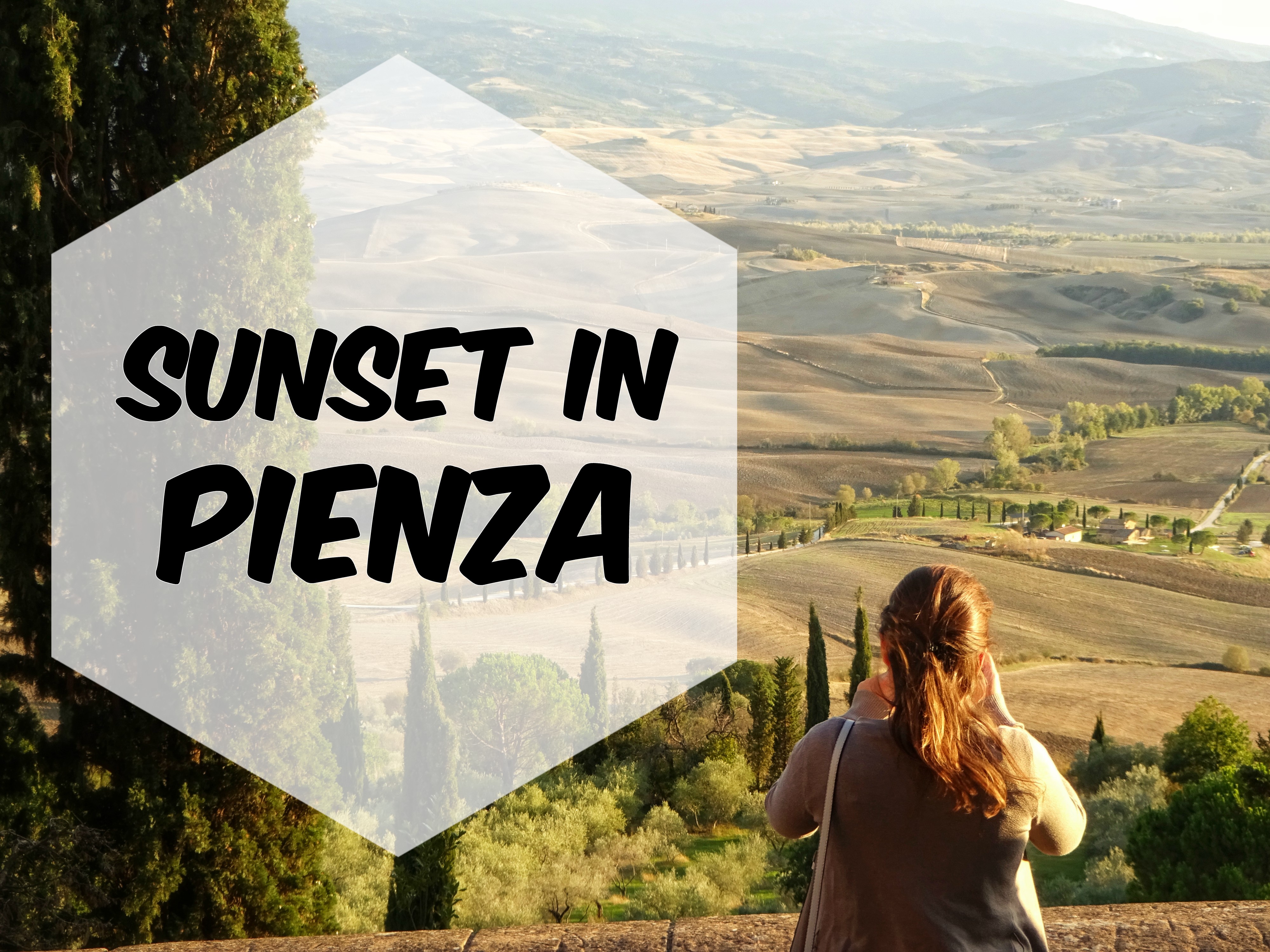 Beautiful golden hills kept unfolding as we drove. To be honest, it was a bit hard to keep concentration while the landscape revealed itself from behind every corner. We knew soon enough that our decision to take the slower road was the right one. We passed through many charming little towns on our way and had our time in Italy been longer, we’d definitely reserve some time for several of them. But our destination for the afternoon was Pienza, which we heard so many good things about. Left in awe by the Tuscan magic we soon reached this town and, with our expectations high enough, we began the tour. 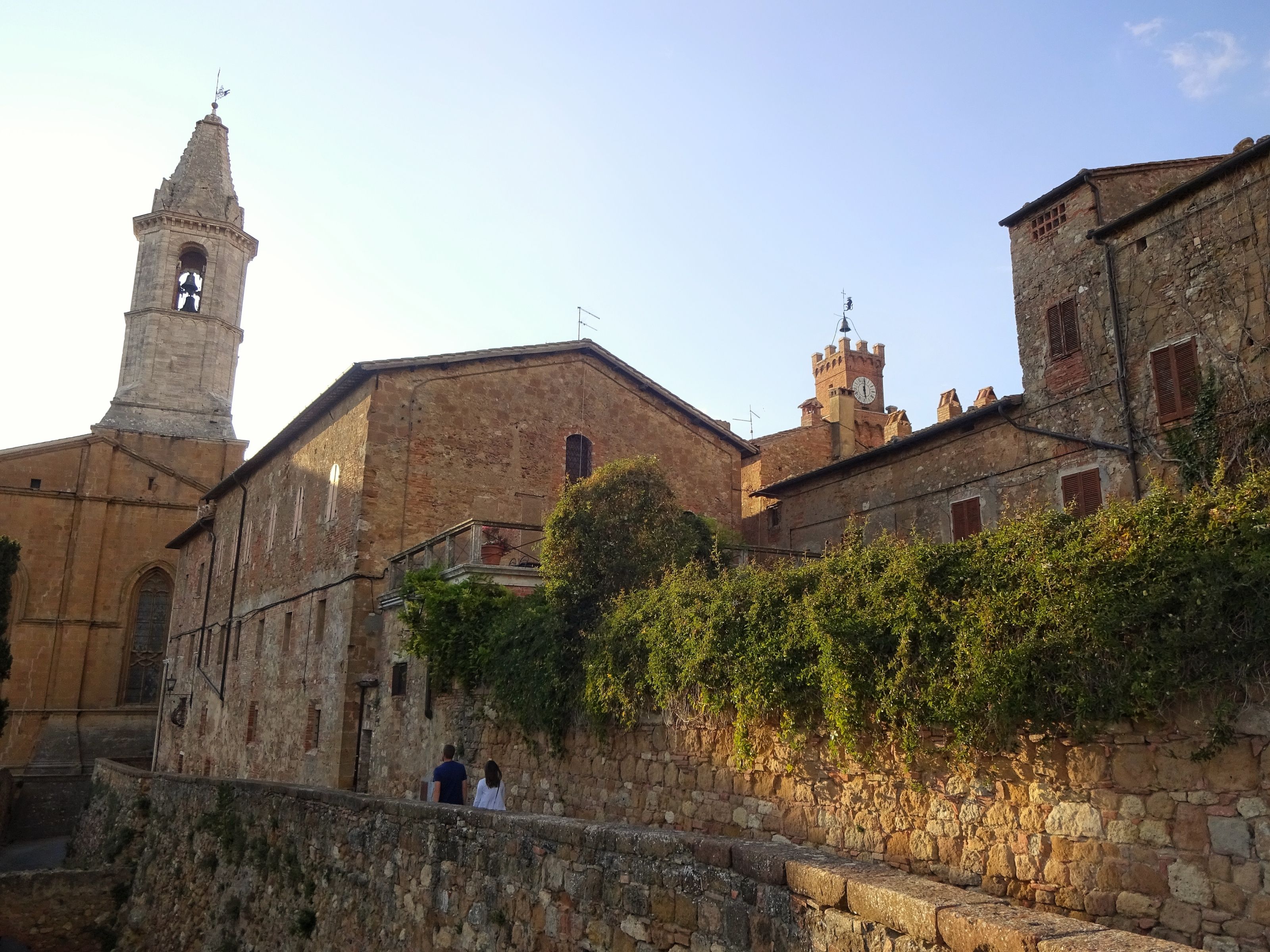 Pienza was built in 15th century by the order of Pope Pius II. Village of Corsignano, which previously occupied the hill on which Pienza now stands, was actually this fellow’s birthplace. And if you hadn’t caught the resemblance, Pienza comes from Pius (roughly translated to the town of Pius). Another interesting fact is that this town was envisioned as an ideal (Renaissance) town, the concept that originated right around the time Pienza was built. Thanks to this, Pienza earned its World Heritage Site status in 1996 (earlier than the surrounding region of Val d’Orcia).

As soon as we set foot in the old town we realized that whoever used the term “ideal” to describe Pienza wasn’t far-off. Picturesque houses with flower-decorated windows, charming shops, cobblestone streets and narrow passages connecting them had immediately transported us back through time. We intentionally switched our minds off and took as many corners as we could, getting lost in the alleys and immersing ourselves in the architecture. 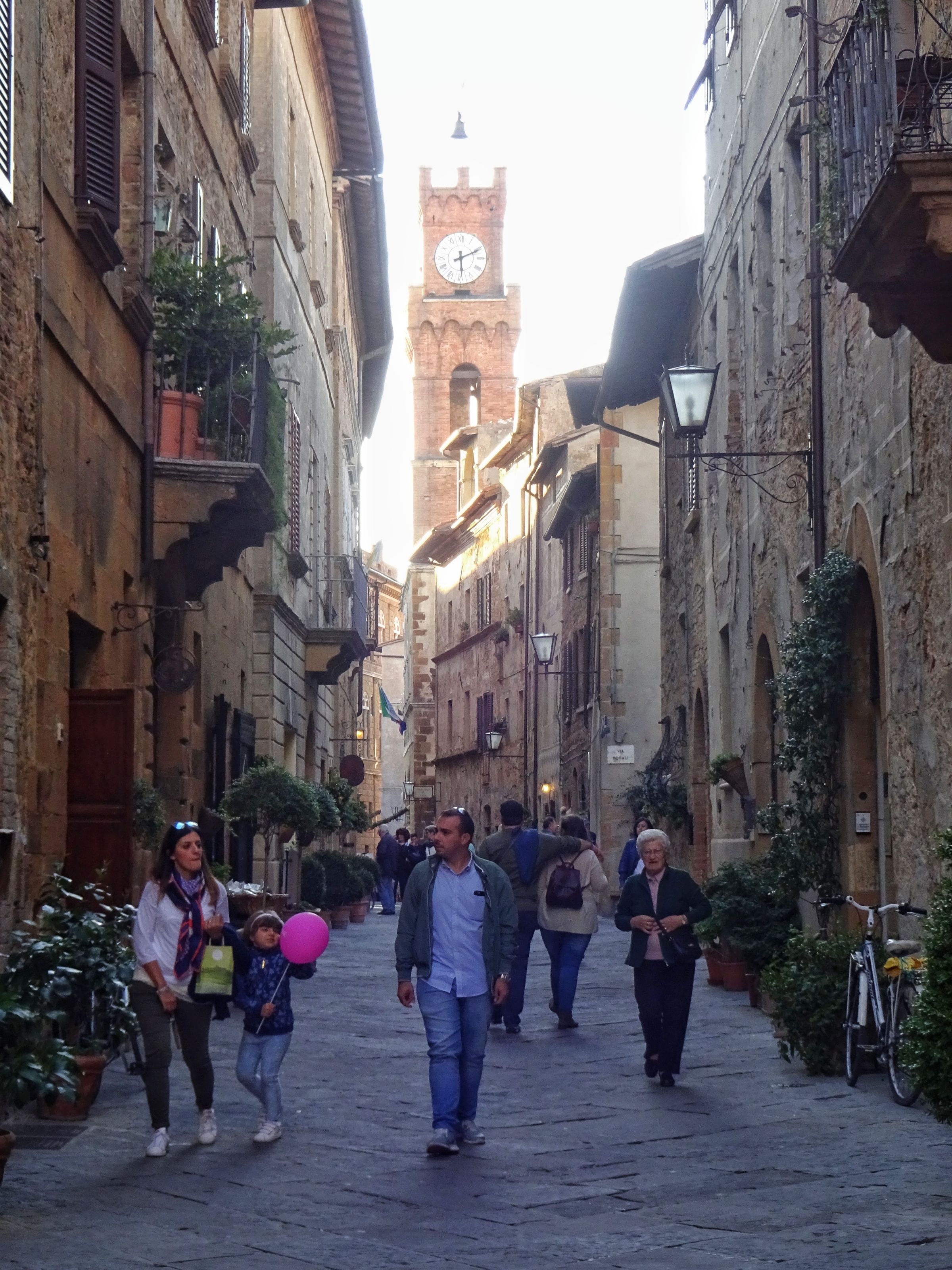 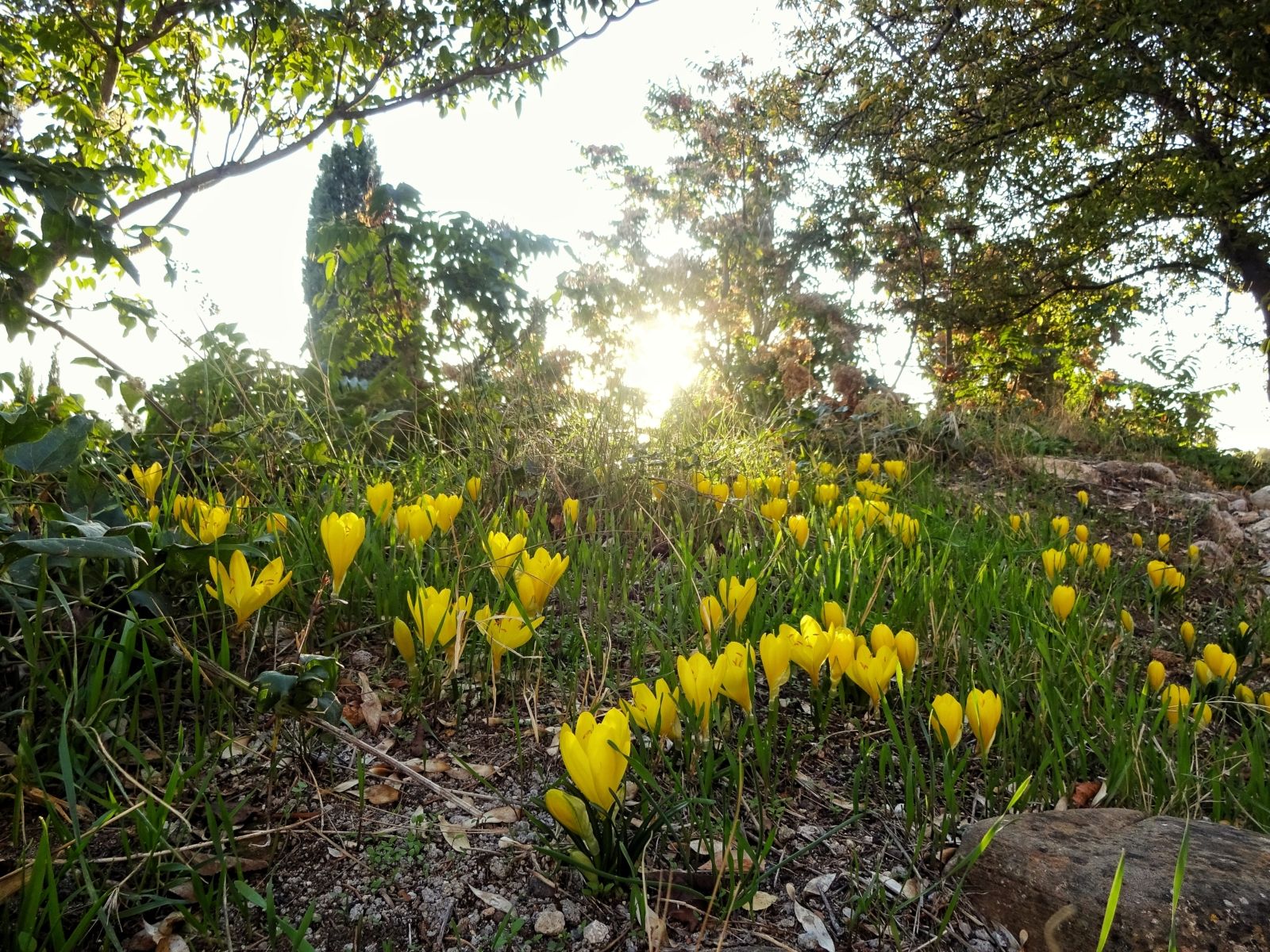 Strolling around, we often noticed the smell of cheese filling the air. Being aware of it, we soon realized many shops have it on display and sell it. We later found out that Pienza is famous for its pecorino cheese and that the cheese festival is held every September. We missed it by a couple of weeks unfortunately, but for all of you cheese lovers out there, this might be yet another reason to visit this lovely town.

Having seen most of the town, we set our course toward the southern walls which offer promise of a spectacular view. And as soon as we reached them it opened up to us. The golden rolling hills, scattered houses hidden in the cypress trees’ shadows and towering mountains far beyond. Here’s how that looked like: 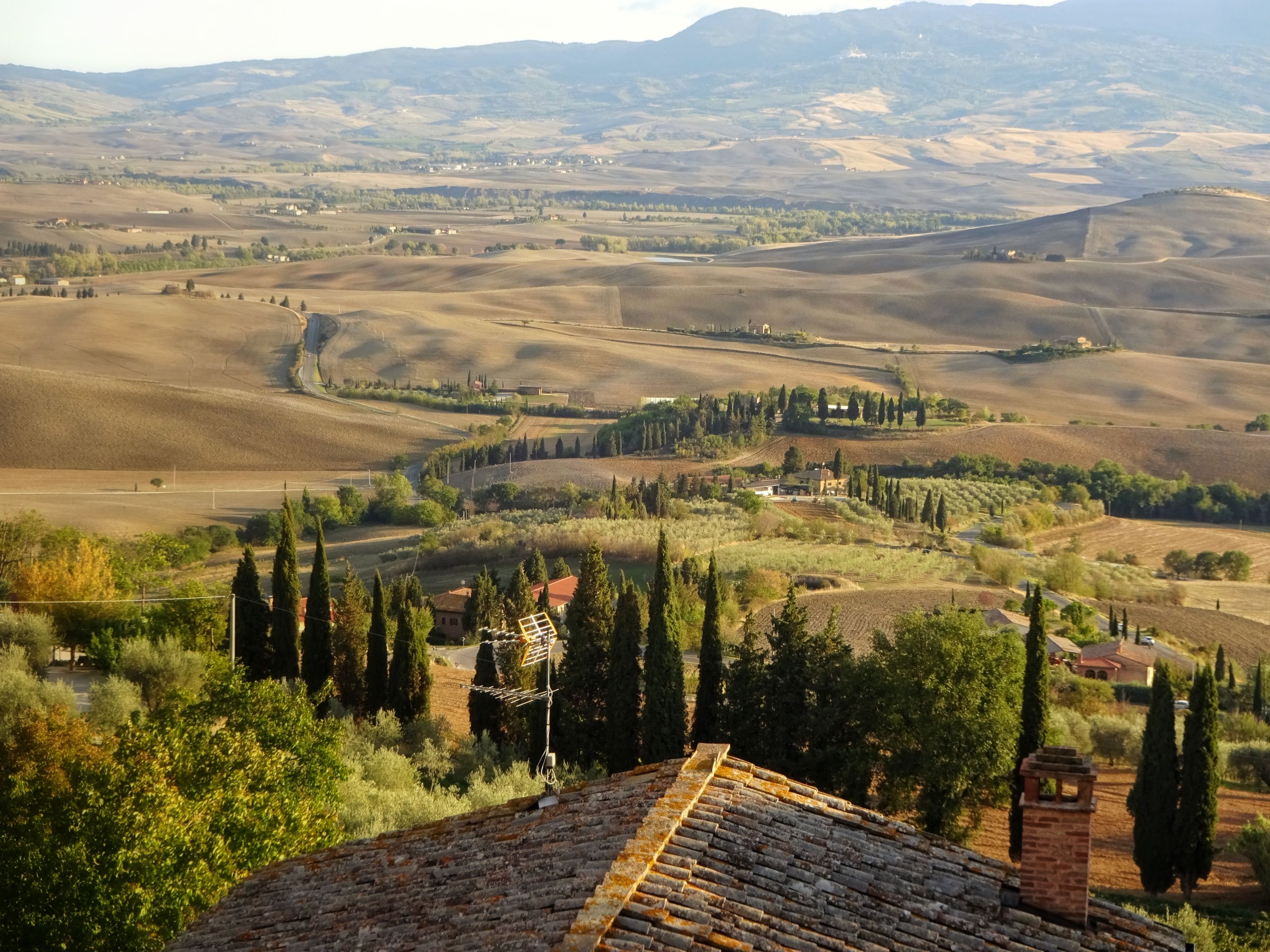 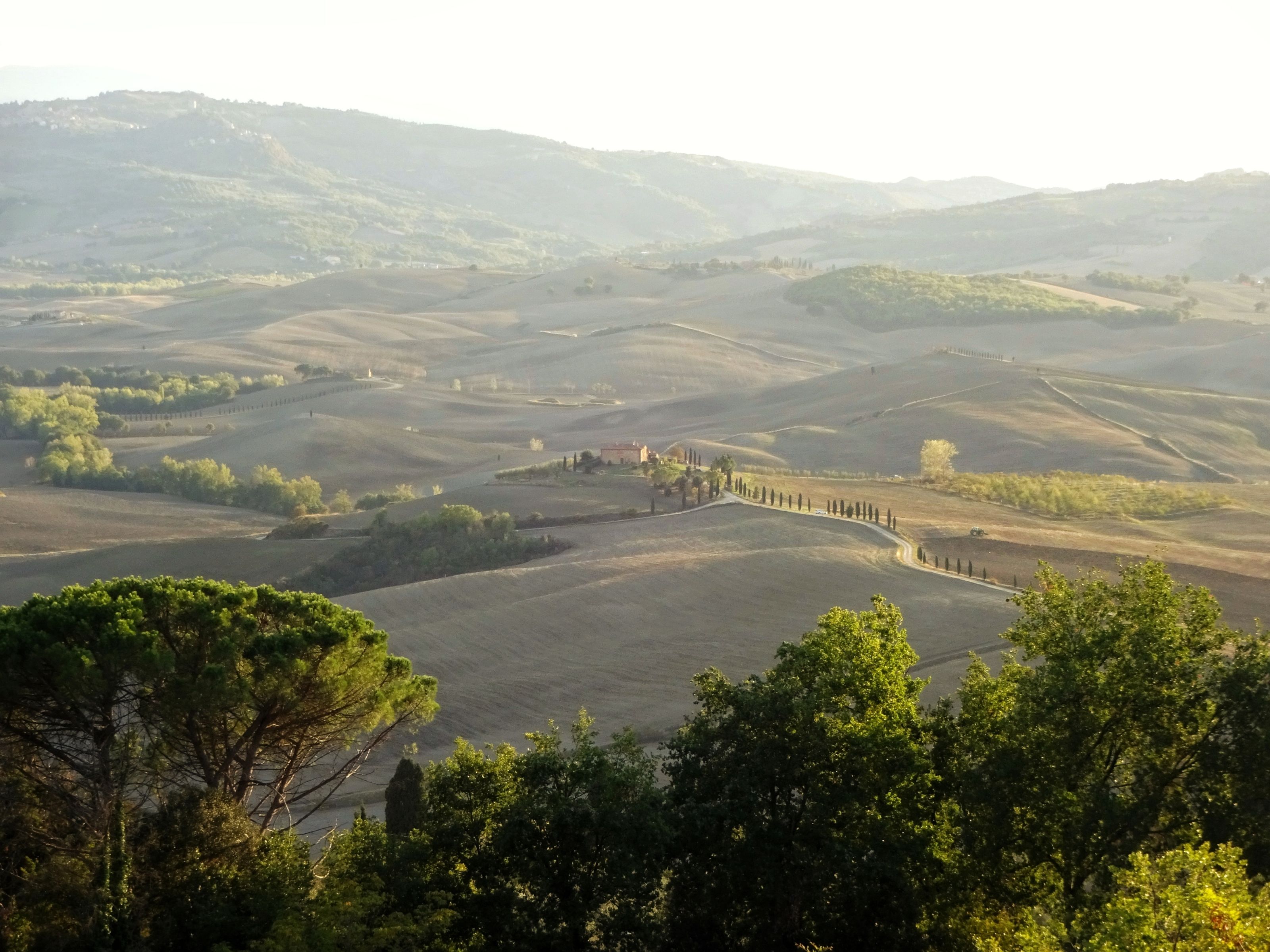 We weren’t the only ones enjoying the scenery. Tourists and locals alike gathered at the walls to watch the sunset. But while we were all there lined up, a weird thing happened. A bunch of kids started throwing tennis balls out of the window of one of the houses behind us! At first, none of us realized what was happening since we only heard loud thumping noise from somewhere around us. But the last one almost hit an Italian guy standing near us! He was furious and was ready to throw a ball right back at them (and trust us, he looked like he was capable of hitting the target) but his wife stopped him at the last moment. The kids quickly pulled back from the window and that was the last we’ve seen of them. Luckily, no one was hurt and we all had something to laugh about. We stayed for a few more minutes and tried to etch the landscape image into our minds. 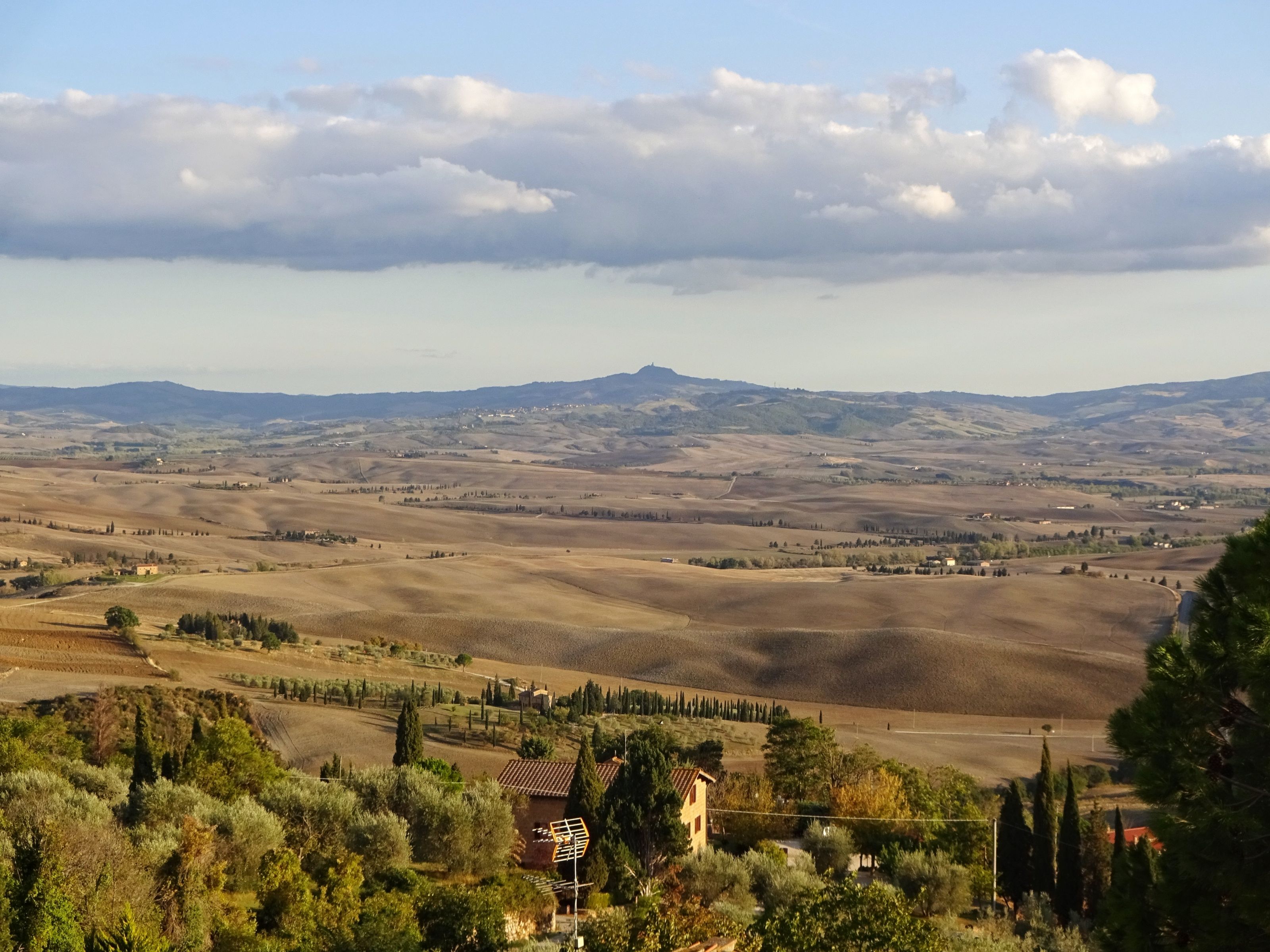 As the sun set, we left Pienza and made our way for Montepulciano where we had our Airbnb booked. After a truly exhausting day we were intent on getting some sleep and recharging our batteries for the days to come.

Hope you enjoyed this post, see you next time!

I hope you are having an amazing time in Italy! It's my favourite place in the whole world. I plan on moving there sometime in the future. Amazing photos, thank you for sharing! I can't wait to see more :)

Thanks! Must say, living in Italy does sound really good ;)

Definitely :) It's always been a dream of mine.

Thank you for sharing your travel report @jny.untraveled

Have a great day,
Thomas

Wow Italy is indeed an amazing place to be .and no wonder the images are beautiful !

Easily one of the most beautiful countries in Europe :)

That it seems .
keep travelling and give us awesome pictures ;)

Thanks for the support, will do! ;)

A very good post! And the pictures are amazing!

Thank you! Italy is absolutely amazing, you should definitely visit it someday :)

Amazing post! The gif is so fun to look at, good work😉

Haha, thanks! Since we were driving, it was easier to capture a video so we didn't have good photos to show and we had to do with what we've got ;)

Congratulations @jny.untraveled, this post is the second most rewarded post (based on pending payouts) in the last 12 hours written by a Newbie account holder (accounts that hold between 0.01 and 0.1 Mega Vests). The total number of posts by newbie account holders during this period was 1721 and the total pending payments to posts in this category was $948.61. To see the full list of highest paid posts across all accounts categories, click here.

Tuscany is the most complete region in whole Italy! It can summarize pretty well the country!

Agreed, there's so much to see and do! Unfortunately, it gets a bit overcrowded (but for a reason)...

Fantastic photography! This was a good article with some beautiful pictures. Thanks for sharing. :)

Thank you, we appreciate it very much! :)

Great, but did you find any wineries...

Alas, we were here for only a short while so we didn't have enough time to try out some wine :(

Such a classy description my friend!!!.. you should visit India .Waiting for more posts!!

Thank you! We'll visit India one day, for sure :)

Congratulations @jny.untraveled! You have completed some achievement on Steemit and have been rewarded with new badge(s) :