#75: Come, Visit All The Seven Wonders Of The World In One Place!!

Last year, Eco Park, a well-known tourist spot in Kolkata, India introduced the visitors to the beautiful miniature replicas of the 7 Wonders of the world and a lot more. While the list of the 7 wonders on the internet keeps varying from site to site, here's the 7 of them which Eco Park decided to include :

Apart from the above mentioned wonders, Great Sphinx of Giza and Eiffel Tower, Paris have also been constructed. Building the 7 wonders of the world in 1 place was Kolkata's Chief Minister Mamata Banerjee's idea. About 5 acres of land was allotted in Eco Park and artiste Rupchand Kundu was assigned the task to guide the team and look over the task. He was quoted saying that decided and finalizing the list of 7 wonders was the most difficult task as it keeps changing with new discoveries and shift in appraisal. There were 2, which were initially considered but later had to be discarded : Machu Pichu and The Hanging Gardens Of Babylon. The reason to discard the 1st one was that there was limited space to design all 7 of them and it would've been difficult to construct an entire mountain and then show terrace farming. The 2nd one was discarded owning to the lack of existence of any physical evidence. The entry ticket is only Rs.30 (0.46$)! Here's the view of the ones which made it to the list :

Unlike the original Taj Mahal, which is made of white marbles, this miniature has been constructed using fibre glass. 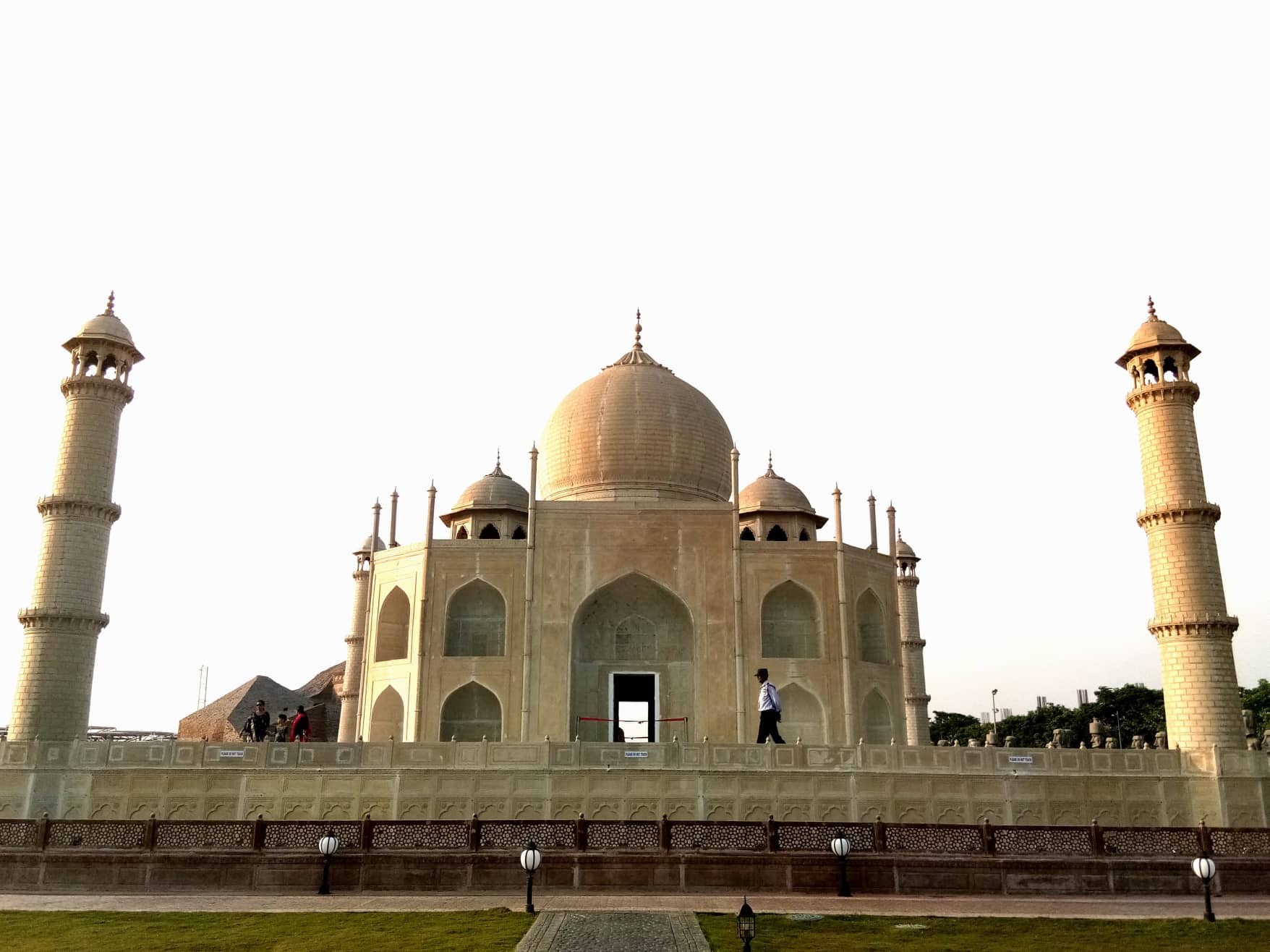 * The Great Wall Of China :

Only a small fraction of the original wall was decided to be taken up. Visitors can actually walk over the wall which is quite small in length(100m) as compared to the original one. The towers look beautiful though and provide a great view of the park. 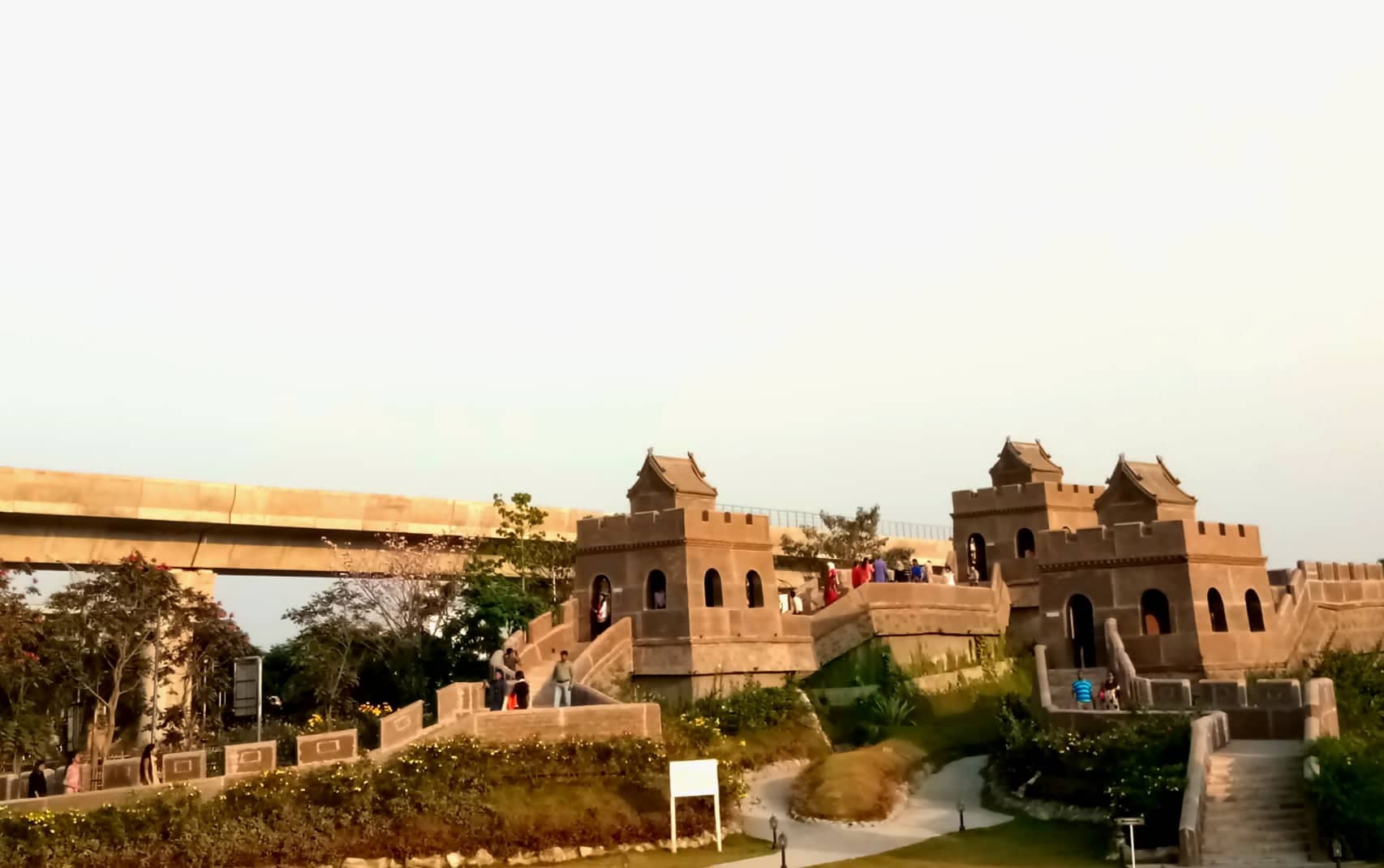 This statue has been built exactly half the size of the original one which stands tall on the Corcovado mountain. It's been placed on an elevated base to make it look taller. Rome’s Colosseum is the largest amphitheatre ever built. It's miniature at Eco Park has been reduced to 1/16th of the original. Even then it looks massive which just gives you an idea of how great the original one would be! 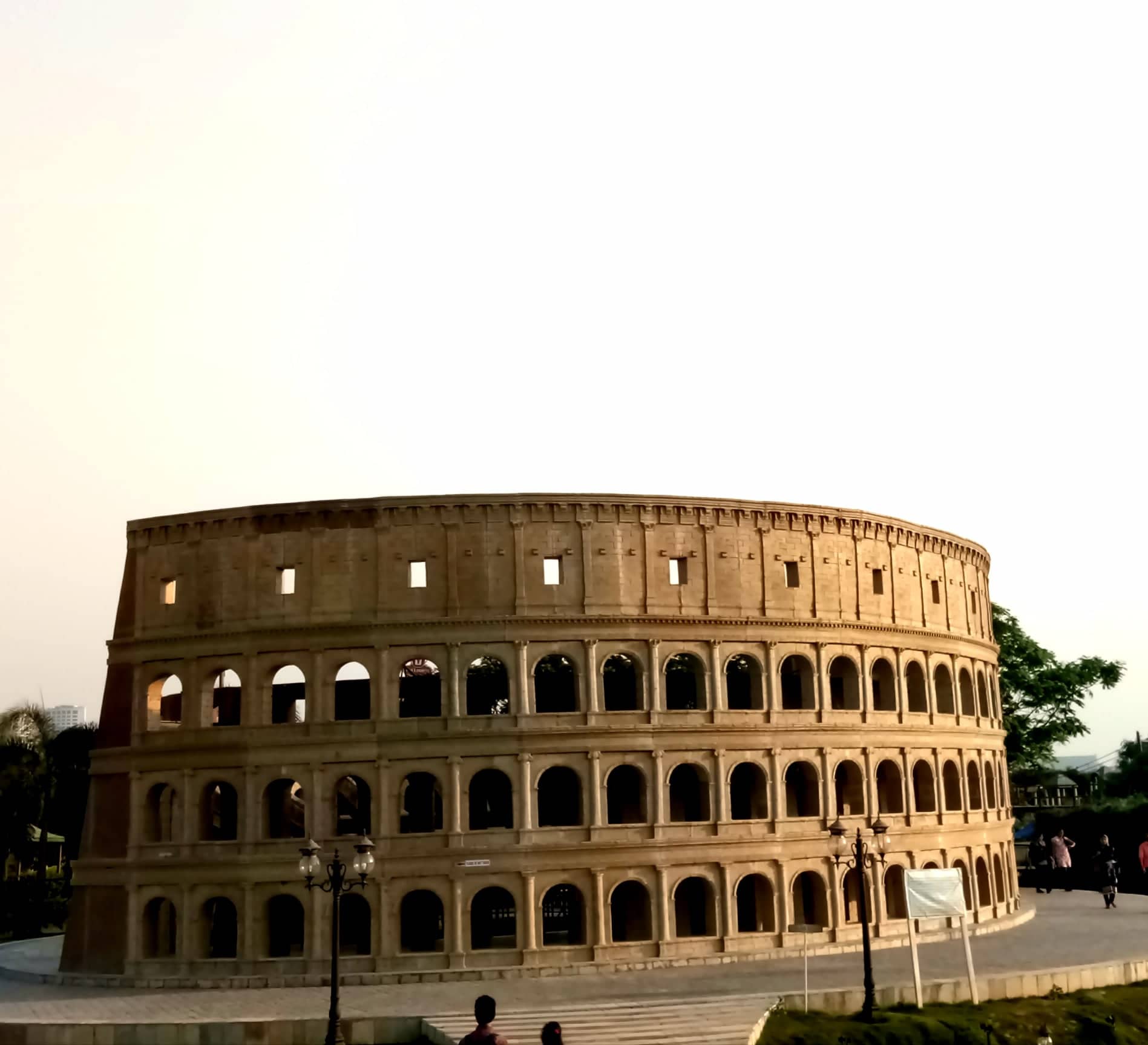 There's a small entrance built where visitors can enter and view the inside area which is built like a cave leading to another exit. It has a sandstone hue and the height is about 50ft. A total of 32 statues have been made with a varying height between 15 to 19ft. 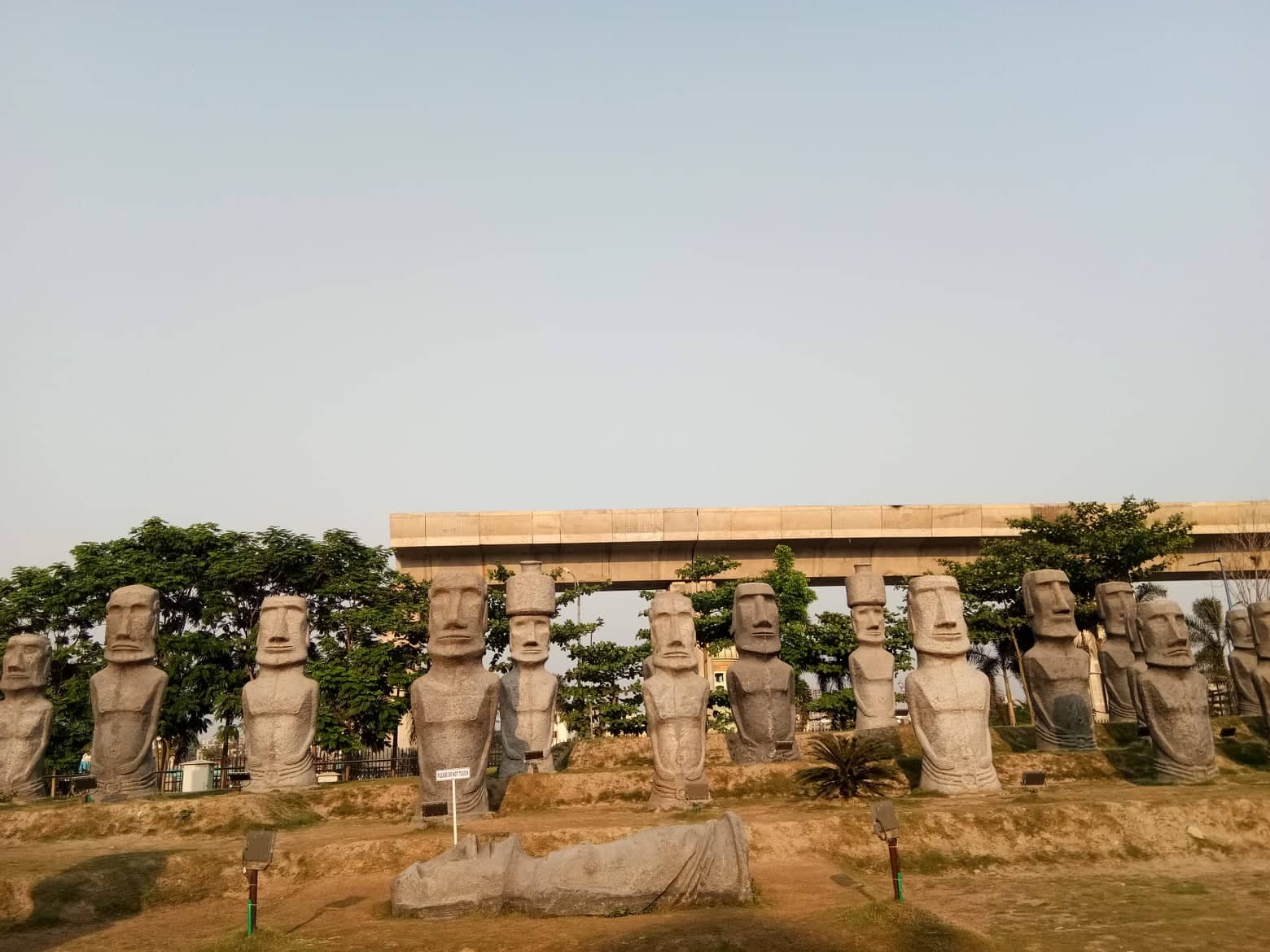 * The Great Pyramid Of Giza, Egypt :

There are around 3 pyramids which have been constructed. The center one is 40ft tall and is air-conditioned inside! You can enter into it and see the colorful walls decked with paintings. Here are the additional two :

The Sphinx is placed right next to the center pyramid. It might look dwarf-sized as compared to the original one! 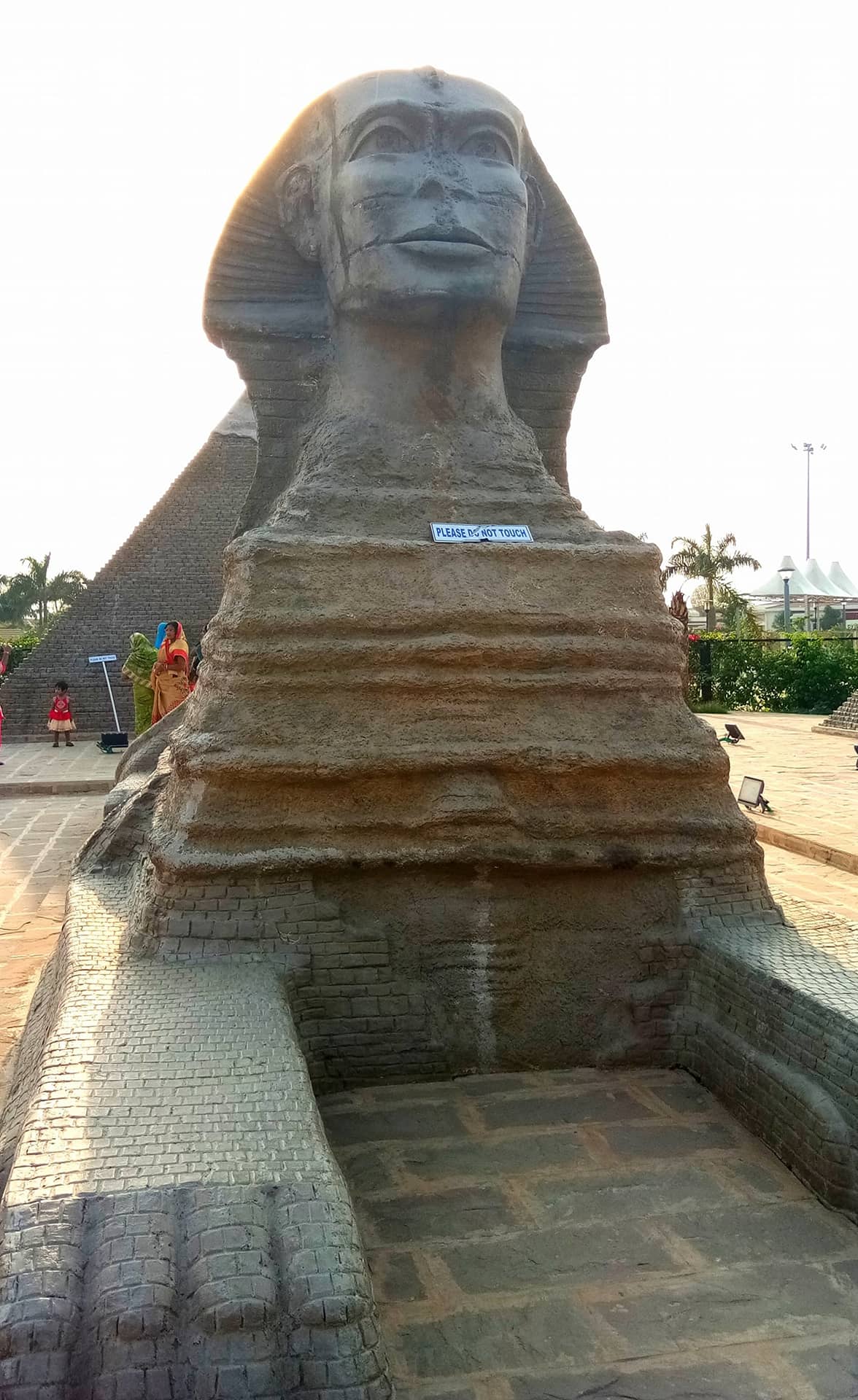 Eiffel Tower is the only one which is located far away from the other wonders. It's not included in the enclosed area which contains the rest of them. It looks beautiful at night. The light keeps changing too, so you get to see various colors of Eiffel Tower! At night it looks so amazing that it just might motivate you to visit the real one. I hope you guys enjoyed reading the blog. If you ever visit Kolkata, make sure to check out this place.

Looks very interesting. I have visited the sites of 5 of the 7 wonders of the ancient world. Still need the hanging gardens of Babylon and the Clossi of Rhodes.

I have visited only Colosseum and Taj Mahal . They have discarded also Angkor Wat complex in Cambodia as well as Machu Pichu and Hanging gardens of Babylon. But 30 Rupees for Indian citizens for foreigners without FRRO is more expensive I would just ask because maybe Indian government changed the law since I left the country.

Yes, I noticed that the list of 7 wonders keeps changing. While the entry at the original Taj Mahal in Agra does charge a lot for foreigners (it's still the same!), that's not the case everywhere. Eco Park is located in Kolkata and here they only charge Rs. 30 for everyone including foreigners as well :)

I see and that's interesting I thought it was everywhere in India. You're right the list keep changing

Very good post all the best.. thanks for enlightened me

The Taj, which took twenty-two years to complete, was built with the labour of 40 thousand slaves. The colossal expenditure of building it (over $1 billion now), which included dragging the marble and precious stones from all corners of the globe, was also extracted from the Emperor's subjects - the impoverished villagers and shopkeepers, in the form of imposed and oppressive taxes. That history lives on, as even today the Taj's luxurious, white autocracy stands apart from the miles of crowded, grey squalor of the towns and lives that surround it.

But the real lies are the stories of romance woven around the life and death of the woman believed to be buried here. Mumtaz Mahal, was Shah Jahan's third wife, and was engaged to him when she was merely 14. In their 19 years of marriage, she bore 14 children, enduring a pregnancy almost every year, till she died giving birth to her fourteenth. She died of postpartum haemorrhage because of the multiple, back-to-back pregnancies she was forced to endure.

It's absurd that many view this form of lethal, reproductive labour, as indication of Mumtaz's "favourite" wife status. To be the number one pick of a man's harem, surely is not any woman's idea of romance. And Shah Jahan in his lifetime had collected 2000 women in his harem! But if indeed, Shah Jahan shared that special intimacy with Mumtaz, then wouldn't he have noticed her body, visibly, weakening and crumbling, right before his eyes, with each successive pregnancy? Or was she only a detached vagina and womb, a sex toy to him, and not a real person whose body, health and welfare would register in his consciousness in any way? Indeed, if this is love then India still has plenty of it. India, even today, accounts for the highest number of maternity related deaths (17%), largely due to the same reasons - early, multiple and consecutive childbirths, where women are denied birth control, or ownership and choice of over their own bodies.

Very true and agreed. But i don't remember commenting on it 😛
As I see you have clearly dodged my comments about you mentioning him KILLING everyone. Try not to spread rumours about anyone living or dead.

I deleted my comments your attitude wont show the learning vibes.. you have ego lol.. I just told, that i read and found. I dont have an intenstion to abuse the Taj but, history don't lies.
I will bring out my teams archaeological paper if you want.

See that's the issue...I am the one here not showing learning vibe?? 😄
I'd love to see some evidence which says he killed 40000 men! And let's not delete anything. I'll prefer some educated people to read it. Maybe someone else might be successful in imparting some sense into you. I clearly failed to do so 😄